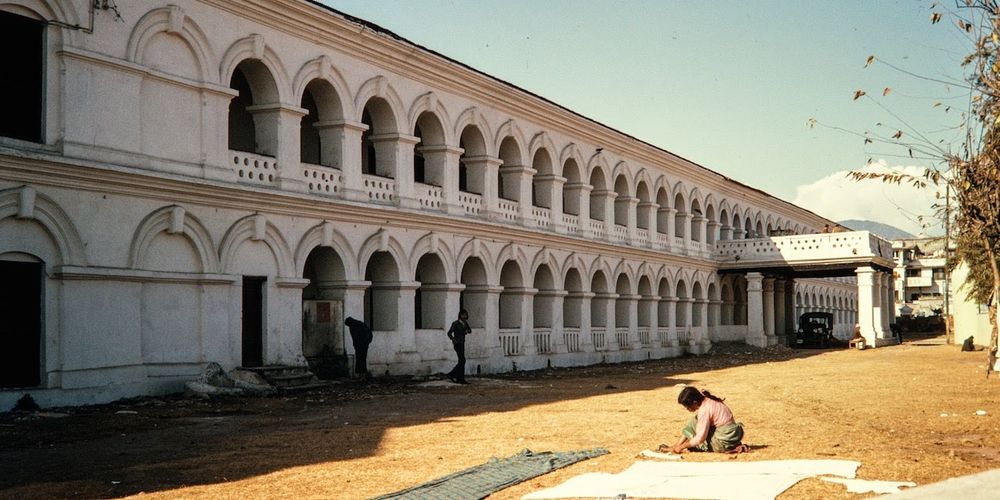 Retired diplomat and linguist Dr. Jaya Raj Acharya is a friend. So two months ago, when he presented me with a copy of My Diary, which was written when he was 16 and 17 years old, I felt a reluctant obligation to read his 365-page-long proof of his dogged, boyish determination to improve his English. Despite my initial misgivings, I was in for a most pleasant surprise.

At first glance, My Diary appears to be just what the title implies: a year’s worth of handwritten, one-page entries for every day of 2025 BS. Many include the author’s winsome pencil drawings, including a few sketches of beautiful young women glimpsed on the streets. (He was, after all, a teenager.) Some entries are prompted by the occasion of a holiday, by a Sanskrit sloka (usually from the Hitopadesha, a compendium of fables dealing with statecraft), even the occasional passage from Shakespeare. Sometimes, but mercifully rarely, there are recitations of historical factoids, such as “Leonardo Da Vinci invented scissors.” Mostly however, the author is inspired by the headlines in that day’s Gorkhapatra.

Unexpectedly, gradually and delightfully, My Diary revealed itself to be much more than a schoolboy’s simple journal. It is, in short, a growth chart of the endlessly inquisitive and deeply moral mind of a young Nepali intellectual and a testament to the excellence of a wide-ranging classical Sanskrit education.

On the first day of 2025 BS (April 13, 1968), Jaya Raj was a Class X student at Durbar High School’s Ranipokhari Sanskrit Pradhan Pathashala in Kathmandu. He had earned a seat there after topping his Class VIII exams in Tanahun, his home district. Without meaning to detract from or diminish this praiseworthy achievement, it must be said that in 1968 there was nothing particularly extraordinary about it. Jaya Raj was simply doing—albeit brilliantly—what was expected of him. He was, after all, the son of Kabiraj Nara Nath Acharya (an Ayurvedic physician), the great grandnephew of the poet Bhanubhakta Acharya, who translated the Ramayana from Sanskrit into Nepali, and the nephew of the then foreign secretary, Professor Yadu Nath Khanal. His education and journey to manhood represents a classic, even archetypal pattern for Nepal: young Bahun from the hills comes to Kathmandu and makes good.

Although My Diary’s one-page format does not permit deep exploration of any particular issue, several themes are revisited, including the importance of learning from ancient wisdom and one’s elders; Nepal’s lamented dependence on foreign aid; the unequal nature of Nepal-India relations; the necessity for diplomacy; the author’s love of nature; and his absolute commitment to non-violence and democracy.

He expresses grudging admiration for King Mahendra’s vision, but also states that the monarch “murdered democracy” and repeatedly criticizes the arrest and imprisonment of B. P. Koirala. He characterizes Mahendra’s “Partyless” Panchayat system as “nothing but his direct rule.” Sometimes he is quite sarcastic. “Lo and Behold,” he writes in response to news that the king has reshuffled the cabinet in September 1968. “Of course Surya Bahadur Thapa is the Prime Minister.” In November of that year, shortly after the Pakistani military’s first overthrow of Prime Minister Bhutto (after the second, in 1979, the generals executed him), Jaya Raj mocks the dictator General Ayub Khan’s claim that his new government had the full support of the Pakistani people as “a joke,” noting that “Nepalese politicians and the King speak the same way as the Pakistani dictator is speaking.”

Jaya Raj’s father appears to have been a rather stern taskmaster, and My Diary is sprinkled with letters from him enjoining his son to study seriously and not engage in frivolous and harmful activities such as smoking, or even kite flying. He wistfully wonders whether he might have become a medical doctor had he not followed—apparently unquestioningly—his father’s admonishment to study Sanskrit. He resolves to study literature and the humanities and follow his uncle’s path to a career in diplomacy. Not surprisingly, given his family lineage, education, and talent, Jaya Raj indeed went on to a distinguished career in public service, diplomacy, and academia that includes, among other things, a Fulbright scholarship, a PhD in linguistics from America’s Georgetown University, a professorship at Tribhuvan University, and service as Nepal’s ambassador to the United Nations. (It is perhaps a noteworthy sign of changing times that Jaya Raj’s own younger son is now a medical doctor.)

As it happens, 2025 BS was also my second year in Nepal, having arrived in April 1967 as an American Peace Corps volunteer. Almost all of the news items that Jaya Raj considers were familiar to me, including the earth and lunar orbits of the American and Soviet Apollo and Soyuz space crafts and the inaugural Thai International Airways nonstop flight from Bangkok. Along with hundreds of Nepalis, I stood by the runway at Gaucharan Airport (as it was then known) and marveled as the shiny new Thai Caravelle aircraft was brought to a halt with the aid of a parachute.

Although I viewed the issues that Jaya Raj explores in My Diary through a different lens, we generally had similar reactions to matters such as the assassinations of Martin Luther King and Robert Kennedy, the Soviet invasion of Czechoslovakia (which Nepal courageously criticized, despite its receipt of Soviet aid), and especially the American war in Vietnam, which we both considered an ill-advised imperial adventure. In an entry from September 1968, Jaya Raj notes the Gorkhapatra’s reports of heavy fighting and casualties in Vietnam with this thought: “They give the numbers of the dead in the news, but what about the parents of the dead soldiers? How do they console themselves?” On another day, he notes: “There are hippies in Kathmandu smoking hashish. It is bad! They have run away from the U.S. to escape forced conscription for Vietnam. War! Poor things!”

Many entries remind the reader in 2016 of how isolated most Nepalis were and how much has changed in the last 50 years. In one entry the author writes that although he has ridden in buses and even flown from Kathmandu to Palungtar, “I have not been inside any car so far.” He expresses surprise and disapproval of the widowed Jacqueline Kennedy’s remarriage to Greek shipping magnate Aristotle Onassis and there are mentions of now almost forgotten countries—East Pakistan—and maladies such as goiter and smallpox. The Sanskrit student’s hostel where Jaya Raj lived at the south end of Durbar Marg is now a line of trendy shops. In October 1968, Jaya Raj mentions that heavy rains have toppled a tree into the roadway in Kupondol, blocking traffic. A reader in 2016 wonders whether, in this now nearly treeless city, that might have been almost the last tree in Kupondol.

Finally, I suspect that the author stands by almost all of his citations from the Hitopadesha, but I do wonder about this one:

“Starting wrong work, opposition to one’s own relatives, competition with a stronger enemy and trust in women—these are the four doors to death.”

Since he has been married for the last 35 years to one of the lovely young ladies he sketched in his diary (his wife Usha’s picture appears on page 114), my guess is that he has changed his mind.

My Diary, 1968–1969 is published by Hastakshar Prakashan, Kathmandu.

Michael Gill  Michael Gill is a former Executive Director of the Nepal Fulbright Commission and has been with associated with Nepal in various incarnations since 1967. He lives in New York.

Why did the British not colonize Nepal?

Remembering, forgetting: Why we must write conflict and violence

Violence undocumented is violence denied, and new writing from Kalimpong and Darjeeling — which includes Chuden Kabimo’s Song of the Soil — is correcting this historical wrong.