In Part 3 of our interview with Bryony Whistmarsh on Narayanhiti Museum, we look at how the Museum remembers the royal massacre. 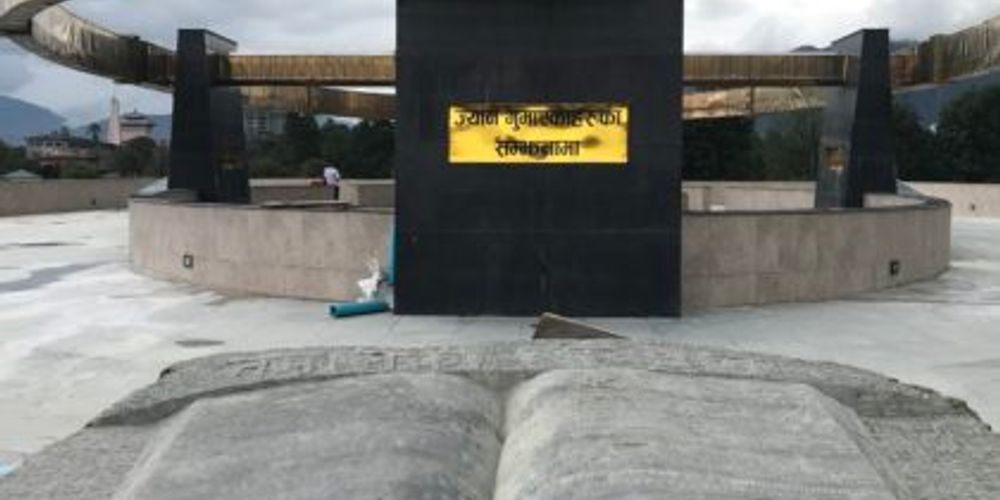 Bryony has published three articles on her research. She was in Kathmandu over the summer and The Record caught up with her to discuss her research on Narayanhiti, the Palace Museum and on the Republic Memorial. Below are edited excerpts from the conversation:

In Part 2 of this interview, Bryony Whitmarsh explains how the Palace became a Museum, how its contents can be “read”, and the unique connection the staff have to the Palace and the Museum.

How is the royal massacre handled by the museum?

Initially, when the Museum first opened, the aim was that the ex-Palace staff gave tours and all visitors were only allowed to go around on a tour in groups of about twenty people. This is a common method in museums around the world (e.g. Robben Island Museum where Nelson Mandela was imprisoned in South Africa, where former prisoners also carry out tours). However, visitors to the Palace ended up queuing for hours and hours, and the ex-Palace staff did not enjoy having to answer questions that they did not want to answer, especially about the royal massacre. Many of the staff complained that visitors thought that the staff were withholding some information. So, first, the staff just stopped giving tours at the point at which the main building ended and let visitors roam free in the space where the massacre happened. Then the staff stopped giving tours altogether.

The massacre took place in and around Tribhuvan Sadan inside the site, which is being rebuilt. The original building was razed to the ground in 2005 and previously, visitors to the museum had to look at labels to imagine where the rooms were. However, part of the building was reconstructed in 2015 and a further part of the building is currently under construction. Visitors can look in from a window into the billiards room to see a seating area around a carpet and a billiards table, in a recreation of the original furnishings. This is part of a general aim of presenting the Palace Museum as open, in deliberate contrast to the lack of official information in the initial response to the royal massacre. At least until 2012, every new Prime Minister would say they were going to provide the truth of what happened during the royal massacre, and the perceived openness of Narayanhiti is very much part of that.

Political rhetoric surrounding the museum when it opened directly linked the massacre and the opening. In the view of the Ministry, rebuilding Tribhuvan Sadan is part of this process whereby the Nepali people are being presented evidence about the massacre and are encouraged to come and see it for themselves—albeit from a window. It is also surely not insignificant that the Palace Museum has generated over NRs 245 million income from ticket sales since opening.

In October 2018 the King’s crown and the crown jewels finally went on display at the museum. Why did it take so long?

The museum staff publicly declared their intention to display the crown jewels in 2009. However, it took so long to display because of resistance from the Nepal Army (traditionally loyal to the royal family) presented in the form of security concerns. The crown was always kept, under guard, inside the palace building but not on public display. Alongside the crown other items went on display for the first time too - such as the King's sceptre, ceremonial sword and shield, ceremonial maces, and the Queen's crown (but with no interpretation). At the same time ten further rooms were opened to the public downstairs, with the interpretation focusing on the ceremonial use of each space. The crown and these items are held in a room with plainclothes security officials and multiple layers of security.

Visitor numbers increased after the crown was displayed but have now resumed to normal (which is reportedly an astonishing 2,000 to 3,000 visitors per day).

Can you talk a bit about other buildings in the Narayanhiti complex like Sri Sadan and why it might be that it is not open to the public?

As mentioned, the ex-Palace staff are generally in favour of opening up more of the grounds and palaces inside the Narayanhiti complex and commissioned a report to influence the Ministry to open Sri Sadan to the public. Sri Sadan was the actual main home of Birendra and his family, is in the same compound and has been preserved with the things that the royal family used. For example, Niranjan's homework schedule and karate trophies are on display and Birendra’s chest expander is still in the bathroom. However, it is unlikely that Sri Sadan will ever be opened.

When some politicians were shown around the Palace complex shortly after Gyanendra had departed they were reportedly busy considering the revenue potential of the museum until they were shown inside Sri Sadan, at which point their mood changed and they expressed feelings of sadness and loss. This was interpreted by some staff as the ability of the space of Sri Sadan, a building designed by Birendra when he was the Crown Prince, to change people’s opinion of the monarchy, and some suggest this might explain why it remains closed.

Is it fair to say that what the Museum staff are drawing on is not nostalgia for the monarchy but nostalgia in Nepal for Birendra and his family?

Of course, the ‘felt lack’ of the monarchy was used by ex-palace staff to draw attention to historical incongruities between the past and present. It was a “reflective nostalgia”, that offered an intimate experience of the dead ex-king, in compensation for the temporal distance created by the museum, and a memory of Birendra as a king who embodied care for the people, in compensation for the displacement of the monarchy for new, and as yet uncertain state structures.

I draw on Svetlana Boym’s dimension of restorative/ reflective nostalgia to draw out the tension in marking absence and loss at the Palace Museum. The state-sponsored narrative used restorative nostalgia to retain a connection with the nation’s distinctive royal heritage, but would have visitors consign the monarchy to the past. According to Boym, restorative nostalgia focuses on ‘nostos’, and aims to reconstruct the lost home, disabling engagement with the present through an idolization of the past.

The “reflective nostalgia” was not a narrative the interim government intended to create, but one that was prompted by ex-palace staff who recalled the presence of the ex-royal family, in order to draw attention to their absence, and repeatedly re-created by visitors, as they walked through the spaces of the Palace Museum. The proposal for the opening of Sri Sadan previously discussed is an attempt by ex-palace staff to create material traces that would mediate others’ experience of the royal past in ways that would enable what the ex-palace staff see as the essential qualities of the monarchy to persist into the future.

Your latest research has focused on the Republic Memorial. Could you talk a bit about that? Why has it taken so long to build and open?

The Republic Memorial (Ganatantra Smarak) was commissioned by the CPN-M led government in the name of the people of Nepal but it has not been widely discussed in the Nepali print media or on social media channels. In my experience, most Nepalis don’t really know that the Smarak project exists: of those that live in Kathmandu, few are aware what the Smarak stands for; of those who are aware of its existence, many remain indifferent. There are definitely parallels with the “complicitous silence” over the construction of the Narayanhiti Palace the planning and construction of the Republic Memorial. Both the Palace and the Republic Memorial designs were politically conceived and involved no public consultation.

The Republic Memorial was inaugurated on republic day in 2019 but this ceremony was not open to the public. I see the site as controversial because it upholds a Maoist view of Nepal’s recent history and the conflict – by emphasizing a narrative of sacrifice and suffering - and showing the people’s triumph over the monarchy. We are yet to see how it will be experienced.

However, the fact that it has taken so long to come to fruition means all of the political leaders in power have had their hand in changing the designs multiple times. The site for the Memorial was changed four times between 2009 and 2012 until the Narayanhiti site was confirmed and the foundation stone laid by then Prime Minister Baburam Bhattarai. The Memorial was positioned in the grounds of the Narayanhiti Palace in order to maximize opportunities for symbolic meaning; its juxtaposition with the Palace Museum is intended to draw attention to the transition between the two regimes, with a route being planned for visitors to move between the two sites. Since 2012 construction and design has continued under successive coalition governments, concealed behind the walls of the palace compound. A recent addition to the design includes a stone book that is a representation of the constitution – it is literally written in stone and cannot be changed!

The changing nature of Boudha’s relationship with water

Boudha once had a long and rich relationship with water but with the explosion of concrete houses and paved roads, fresh water is becoming more and more scarce.