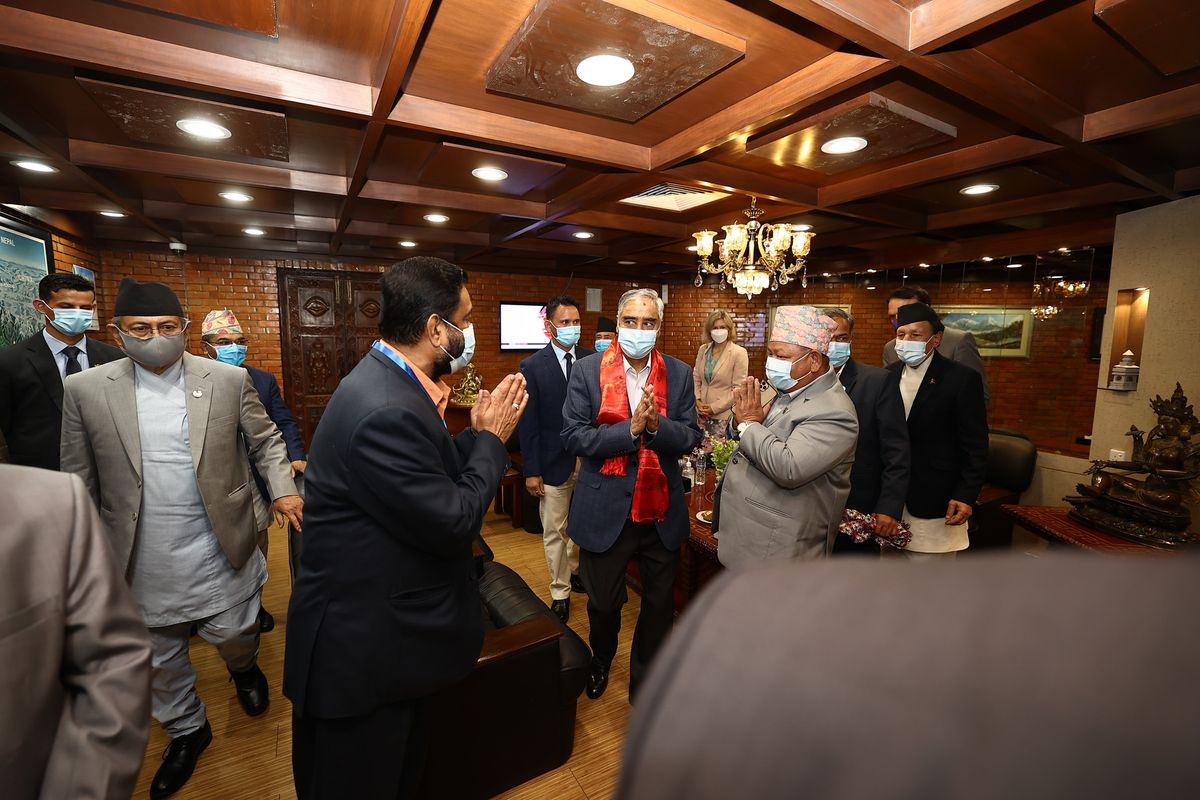 Prime Minister Sher Bahadur Deuba is attending the 26th World Leaders' Conference under the auspices of the United Nations Framework Convention on Development and Cooperation (UNFEC-260) to be held in Glasgow, United Kingdom on November 1 and 20. (Photo- RSS)

In just a few days, what is perhaps the most important international summit on climate change mitigation, adaptation, and cooperation will be held in Glasgow, the UK. Climate scientists, social scientists, activists, journalists, and world leaders from 197 member nations will be in attendance for the much anticipated 26th Conference of the Parties (COP) to the United Nations Framework Convention on Climate Change (UNFCCC), also known as the 2021 UN Climate Change Conference, or simply as COP26.

COP is the annual UN of all 197 member nations that have officially agreed to the UNFCCC. The original framework was designed by the UN in 1992, the signing of which was held at the first historic conference of its kind, COP1, in Berlin, Germany in 1995.

This year’s two-week long conference will be held between October 31 and November 12 under the co-presidency of hosts United Kingdom and Italy — with the latter playing host to the youth forum on climate change and ministerial meetings ahead of the summit.

Essentially, the annual meeting is a formal exercise designed to bring governments, activists, media personnel, and experts together to assess how countries have been doing with their respective climate change combating agendas. Agreements signed during the conference are significant, as they establish legally binding obligations on countries to adhere to their individually presented national plans to reduce greenhouse gas emissions.

Why is COP26 so important?

The conference is being publicized as having a strong potential to become the most significant watershed event on climate change since COP21, the conference that sparked the creation of the Paris Climate Accord. Its reasons are multidimensional and complex, but perhaps most simply summed up by one word — timing.

The Intergovernmental Panel on Climate Change (IPCC), the UN body created to assess and report on the science of the climate crisis released a sprawling, 4,000 page landmark report in August 2021, stating that the planet is well on its way to raising average temperatures by over 1.5 degree Celsius since pre-industrial times based on current emission rates. The document, now commonly known as the ‘Code Red’ report, warned countries of the need to urgently rethink and restructure carbon use as the planet quickly approaches an inevitably and irreversibly warmer eventuality by 1.5 degree Celsius or more.

With the IPCC’s message delivered emphatically and strategically, just ahead of the conference, discourse in world politics, media, and the activism space currently appears to have just the right momentum needed to set the stage for a productive summit in Glasgow. The unfortunate cascade of deadly extreme weather events experienced around the world throughout 2021 has also contributed to shift avoidant eyes towards the climate crisis.

Countries, especially high emitters, are expected to raise their climate ambitions significantly, building upon their individual emissions reduction pledges, known in the jargon of the Paris Agreement as Nationally Determined Contributions (NDCs).

Simply put, COP26 is important because we are running out of time for effective action. But there is yet another reason why a successful COP26 feels like it could be the turning point for climate change: Covid-19.

The shadow of Covid-19 is sure to be felt amidst the pomp and circumstance a conference of COP26’s scale tends to bring. Aside from facemasks, sanitation stations, and distancing protocols, the shared trauma the world went through, and is still fighting, with the pandemic is sure to loom over discussions surrounding the eventualities that await us if urgent climate action isn’t taken.

The summit was itself originally scheduled to take place in November 2020 but was ultimately postponed by a full year due to the pandemic. The Scottish Events Campus, the venue that will host the conference in a few days, was itself used as a temporary medical center last year.

The onset of the pandemic did bring a short-lived sliver of optimism amidst the health crisis in early 2020 as carbon emissions dropped substantially following national lockdowns. However, emission rates were quick to bounce back after restrictions were lifted. It is now being reported that global aggregate carbon emissions have nearly surpassed pre-2020 levels already, bringing the planet right back to its pre-pandemic trajectory.

Studies from around the world have connected the public health outcomes and socio-economic disruptions triggered by Covid-19 to the further exacerbation of the health, financial, and socio-political effects of the climate crisis.

What does COP26 mean for Nepal?

Nepal is one of the most vulnerable countries in the world to climate change. Its diverse mix of several types of ecosystems existing within a relatively small surface area, combined with its rugged geography, lack of resources, and historic disinterest in the science or politics of the climate have set us up for several challenging decades ahead, even with the most optimistic COP26 scenarios playing out.

The list of environmental disasters we have seen just this year alone, each influencing delicately balanced natural processes to affect the other, read like a rapsheet of dystopian mileposts. Notable events included record wildfires, the hazardous air pollution they triggered, severe drought conditions during the winter, the worsening monsoon landslides, the impact of which was seen most tragically in Nepal too, in Melamchi, and increase in climate change-induced unpredictable weather. Just a week ago, unseasonal rains in the east caused flash floods across Nepal, killing more than 77 people.

It is thus extremely important for Nepal and other vulnerable countries in the Global South to strongly present their cases with the eyes of the world on the conference and leaders under unprecedented pressure to deliver real and effective pathways to change course towards net-zero.

What role can Nepal play to contribute to a successful COP26?

The Nepali delegation will be led by Prime Minister Sher Bahadur Deuba. The PM, just as other world leaders present, is expected to share the country’s revised list of NDCs providing a national blueprint for exactly how and on what timeline Nepal will reduce its greenhouse gas emissions.

There is no question on the importance of this exercise. Nepal’s NDCs, both in their first and second iterations, were widely criticized for being too ambitious and their implementation processes too underwhelming. Recent policy decisions, such as the provision in the 2021/22 fiscal year budget which opened doors to the legalization of sand mining practices, or the 2020/21 fiscal year budget which hiked excise duties on electric vehicles (which was thankfully repelled the following year) have contributed to further fractured public faith on climate action. With national emissions on the rise, there is thus a good case to be made for Nepal to revise its NDCs, and rethink how it is going to achieve the targets.

In my opinion, however, Nepal’s top priority at COP26 should be in positioning itself as strongly as possible as the victim of the global crisis that it is. Even though Nepal’s greenhouse gas emission measures have more than doubled in the last decade, its overall emission volume is still negligible on the global scale.

The Nepali delegation’s energies are thus better spent exerting pressure on industrialized high emitter nations, who have each built their empires of wealth and influence by filling the atmosphere with their carbon waste, to act urgently, if not for the sake of the planet, than on humanitarian grounds for the sake of billions of people in the Global South who continue to fall victim to the effects of a crisis that they did not cause.