The private sector can recover but for the entire tourism industry to bounce back, governmental interventions are necessary, say entrepreneurs. 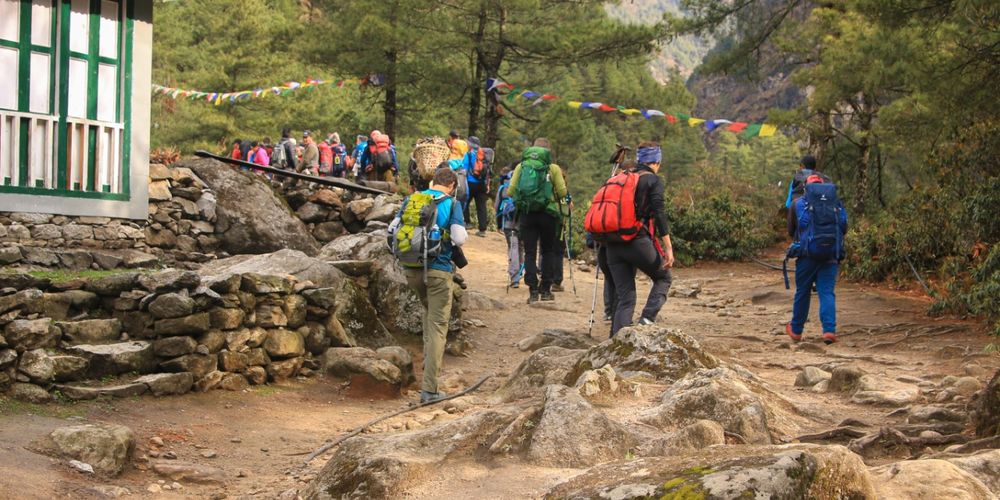 Shova Khanal had her life planned out. After eight years in the tourism industry, she had become an assistant officer at the Trekking Agencies’ Association of Nepal and was finally making good money as a tour guide. And she was soon going to be a mother.

“Everything was going according to plan, but by the end of 2019, news of the coronavirus began to emerge and tourists stopped coming. All my plans were disrupted,” said the 28-year-old, who has been out of a job since the 2019 autumn trekking season.

In Nepal, tourist guides like Khanal make most of their yearly income during the two tourist seasons -- the spring and autumn. The spring season, which is from February to April, has just ended and although the country was not under a lockdown for most of the season, Khanal was unable to find clients as tourist numbers were dismal.

“People are scared to travel right now. I would earn at least Rs 50-60,000 a month during this season. But this year, like the last, my income has gone down to nothing,” said Khanal.

The tourism sector is one of the largest industries in the country, contributing around 8 percent to the total GDP and employing more than a million workers. But the pandemic has brought the sector to its knees, affecting thousands like Khanal whose livelihoods depend on it.

A three-week survey, which has consolidated the voices of more than 200 workers and 100 business owners who are part of Nepal's tourism industry, carried out by Kathmandu Living Labs, highlights just how grave a scenario the tourism industry is currently facing. It also brings to light the serious economic and psychosocial impacts Covid-19 has had on Nepali tourism.

“The report assesses the impact and need of the people and businesses in the industry," said Asmod Karki, chief operating officer of Kathmandu Living Labs, a civic-tech enterprise that is also currently developing a portal to consolidate data and information related to the tourism industry.

According to the survey, 65 percent of the 200 respondents are currently unemployed, with 95 percent holding some form of debt. Among the remaining 35 percent who have managed to find work, nearly two-thirds reported that they were working at reduced incomes.

Since the first lockdown in 2020, Tshering Lama has managed to take on only one group. Just before the lockdown was announced, he took a team to the Everest  region.

Lama, who has spent 11 years in the tourism industry, started his career working as a trekking guide. After working for five years, in 2015, he was able to start his own trekking company, Mountain Journey Trek.

"Things were not this bad even during the year the earthquakes came. Even then, we did some business," said Lama. His company would see at least 100 trekkers every year, with his staff earning around Rs 50,000 a month during tourist seasons.

"Now there are no clients. I was forced to send home the nine trekking guides we had. I wonder what they must be doing back home in their villages with no income, but my hands are tied too," he said.

The situation is the same across the board. According to the results of the survey, which were made public on Monday, around 80 percent of tourism-related businesses are facing difficulty in covering operational costs since the beginning of the pandemic in 2020. Small businesses (with less than 10 employees) have been particularly hit hard; over 80 percent of such businesses have had to shut down their operations, according to the survey.

Raj Gyawali, a tourism entrepreneur who has spent almost two decades in the industry, has also been forced to cut down his team. From 12 employees, his company is now down to one employee and himself.

According to the survey, the pandemic’s worst effects have been felt by those from the lowest strata: more than 90 percent of the respondents said they had little to no savings due to the pandemic, and fulfilling basic needs such as housing, education, food, and health services was a major challenge.

“In the last year-and-a-half, my savings have finished. I was proud of the fact that I did not depend on my husband financially, but now he’s the only source of income our family has,” said Khanal. “And taking care of a child in such a difficult time -- financially and emotionally -- has not been easy."

Mental health is another prominent issue that needs to be taken into account in the context of the pandemic. According to the survey, more than 95 percent of the workers reported that the pandemic had impacted their mental health. However, only 13 percent have sought mental health support.

"Financial insecurity and living in isolation has of course affected everyone's mental capacities in different levels, not just in the tourism sector but everywhere," said Gyawali. "I think it's also the fact that working in this sector, you have to be constantly connected to people and the pandemic has taken that away from us."

With little to no savings, increasing debt, and an end to the pandemic nowhere in sight, the situation for most people who are financially dependent on tourism does not look promising. The private sector could bounce back easier, say entrepreneurs, but for the industry as a whole to recover, government interventions are necessary.

"The Finance Ministry and Ministry of Culture, Tourism, and Civil Affairs perhaps have the most important role to play, as the country is about to draft a budget," said Karki. "However, the challenges are multi-layered and complex. For businesses, subsidies on long term loans and collateral free short-term loans from the government would help keep their operations afloat. There are funds available but the processes are either too complex, opaque, or the people do not know how to access them."

If the government works with the tourism sector then there is hope things could turn around, say entrepreneurs.

"Essentially, if the government facilitates a conducive environment where we can grow then we can bounce back," said Gyawali.

And Nepal has an advantage, say entrepreneurs, because the country is an adventure destination.

“Adventure destinations are the first to recover from crises," said Gyawali. "There will be demand once the dust settles. But it also depends on how the government will take things forward. The only way from here is up."

Koilabas: a town left behind

Along the Nepal-India border lies a place where history runs deep, but the future is uncertain