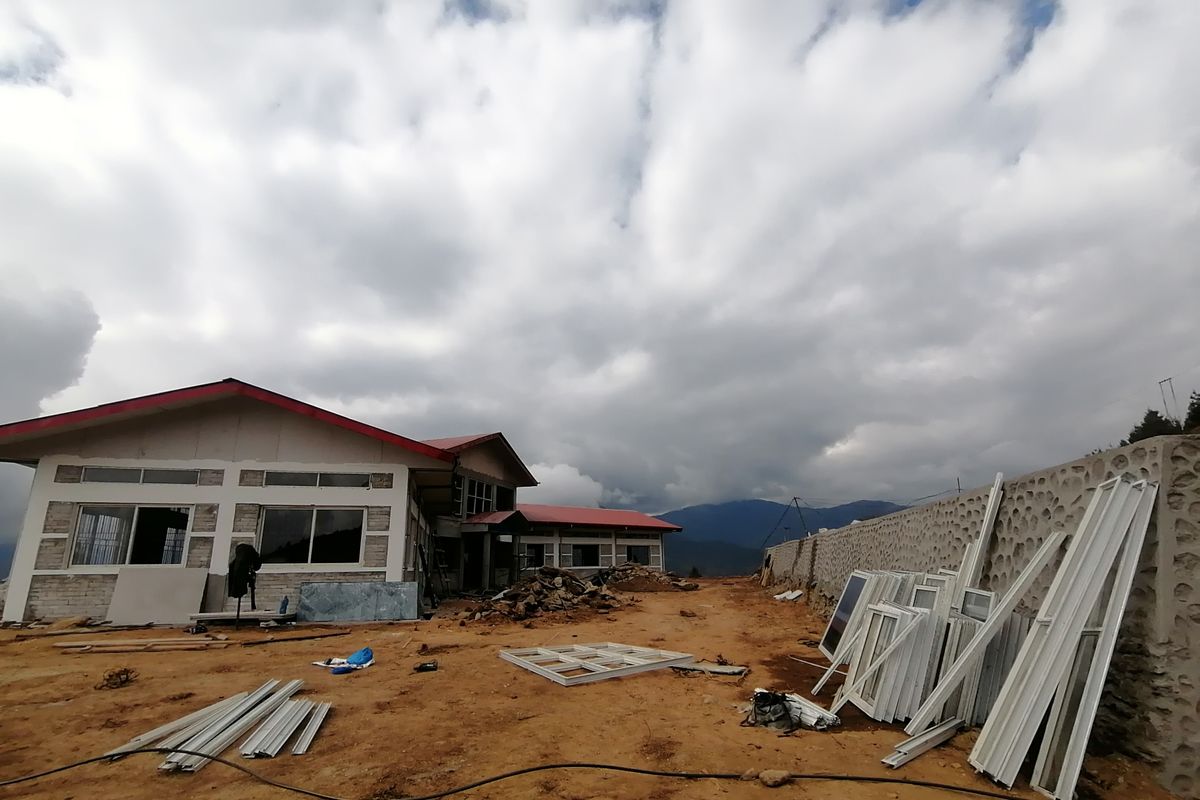 A section of an under-construction building of the NMA at Garma, Solukhumbu, where the institution aspires to run a tourism university focused on mountaineering and adventure tourism. (Birat Anupam )

On June 3, 1950, a French expedition led by famed mountaineer Maurice Herzog, supported by Nepali Sherpa sirdar Ang Tharkay, summited Annapurna (8,091 meters) for the first time. The ascent onto the 10th highest peak in the world marked the first time an eight-thousander had been scaled.

This mountaineering feat drew great interest from the world, not only for Herzog and his climbing partner Louis Lachenal, but also to Nepal's mountaineering world. Herzog detailed the ascent in his book Annapurna, which had reportedly sold 11 million copies by 2000. Three years after the ascent of Annapurna, Tenzing Norgay and Edmund Hillary scaled Everest on May 29, 1953. The successful summit of the world's tallest mountain brought further attention to mountaineering in Nepal. By the end of 1960, all of Nepal's eight eight-thousanders had been summitted, the last being Dhaulagiri on May 13, 1960. By then, Nepal had been firmly established as any mountaineer’s go-to destination.

However, despite being home to dozens of Himalayan peaks, Nepal did not have a mountaineering school until 2002. For years, Nepali climbers who could afford it either went to India's Himalayan Mountaineering Institute in Darjeeling and training institutes in Europe. Others who started out as porters and guides learned on the job.

“Nepal lacked a technical institute to train mountaineers, both technically and academically, for the longest time,” said Tshiring Jangbu Sherpa, a famed mountain guide. “I too am a product of learning-by-doing. I underwent formal training years after I started climbing.”

In 2002, Nepal began exploring both short-term training and university-level academic courses on mountaineering and adventure tourism. The Nepal government formally established the Nepal Mountain Academy (NMA) on May 30, 2002, under the Ministry of Culture, Tourism, and Civil Aviation.

“I always used to think that if a mountaineer can climb a mountain, why can’t they pick up a pen?” said Lakhpa Phuti Sherpa, current president of NMA and one of the primary people behind the NMA. Lakhpa Phuti was deputy leader of the 1993 spring expedition that saw the historic summit of Everest for the first time by a Nepali woman, Pasang Lhamu Sherpa.

NMA operates some of its theoretical classes from its premises in Kathmandu’s Bijulibazar, but its practical venue is in Garma, Solukhumbu district. The seventh semester BMS theoretical program is also held at Garma.

But despite being established in 2002, it took over a decade-and-a-half for the institution to start offering higher level education. Bachelor of Mountaineering Studies (BMS) and Master of Adventure Tourism (MATS) only came on offer in October 2018 and January 2020, respectively. Both BMS and MATS are offered under the aegis of Tribhuvan University, Nepal's oldest and the largest university.

“For almost four years, we had to frequent all the chambers of the Nepal government and Tribhuvan University,” said Lakhpa Phuti, who is also the author of Forty Years in the Mountains and Himal Ki Chhori. She related that a number of European universities had offered affiliation to NMA but she declined, believing that Nepal should take ownership of its mountaineering institute.

“We had to work from the scratch, lobbying for required legislation and then creating an academic syllabus in collaboration with experts,” she said. “We were driven by the fact that if Nepal could not lead in the educational front of mountaineering, we would be at a very disadvantageous position.”

Many young people have taken a shine to the NMA’s offerings, especially since it provides practical courses that require hiking and trekking, which are already attractive to young people.

Shova Siwakoti is a 21-year-old, fifth semester BMS student at NMA who fell in love with the mountains while growing up in Singati, Dolakha. As part of the practical side to her program, she has stood atop Tsergo Ri peak in Langtang.

Similarly, 25-year-old Divya Dhakal from Pokhara is in the second semester of her MATS program.

“From my home in Pokhara’s Himali Tole, we could clearly see Machhapuchhare, Manaslu, and Dhaulagiri,” said Dhaka. “I wanted to study tourism for my bachelors but was unable to do so. After completing my BBA, I was finally able to join the MATS course, which is what I had wanted since my childhood.”

Looking to the future, Lakhpa Phuti has big plans. She wants to turn the NMA into a full-fledged university, Nepal’s first tourism university, that will include a mountaineering sports center and an international mountain museum.

“Nobody thought NMA would run the world's first university-level mountaineering and adventure tourism courses until half a decade ago,” she said. “So the dream of establishing Nepal's first tourism university might be distant but it is achievable.”

Birat Anupam   is senior English-language journalist at Nepal's official news agency- National News Agency and senior reporter at nepalpress.com. Based in Itahari, he mostly writes on tourism, diplomacy and the environment. His bylines outside Nepal have appeared in The Diplomat, The Daily Star, The Third Pole, among others.

The other side of Annapurna

A portrait of Marpha village in Mustang

The private sector can recover but for the entire tourism industry to bounce back, governmental interventions are necessary, say entrepreneurs.