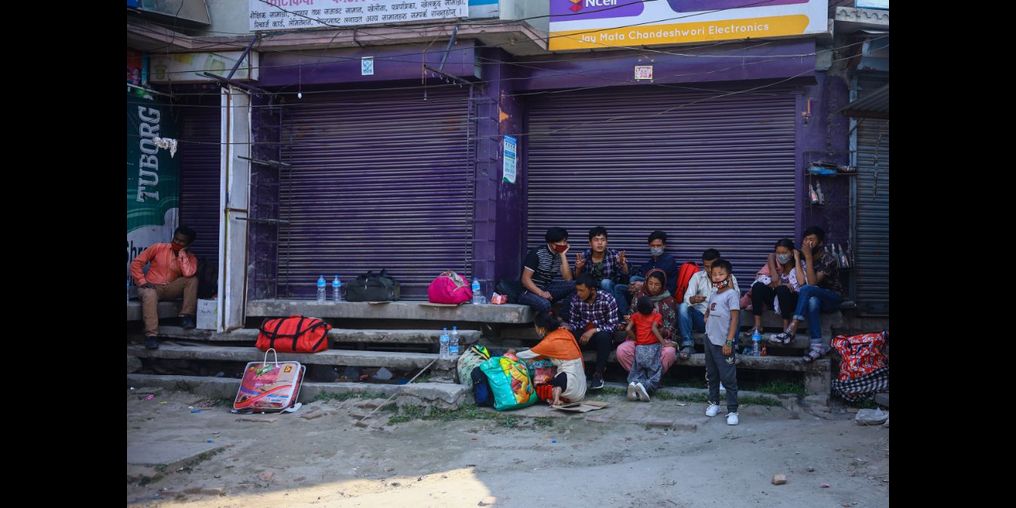 Hundreds of seasonal migrants still lie stranded at the India-Nepal border while rulers in Kathmandu instruct the state machinery to prevent them from entering Nepal. At the same time, president Bidya Devi Bhandari has expressed her concern for Nepalis trapped in Europe, Australia and the US. The newly emerged ruling class dons a communist hat and claims to represent the working class but has proven to be largely unsympathetic to their woes. It seems as though the struggles faced by these Nepali citizens and the cries of protest they and their families have been too feeble to penetrate the hard-shelled hearts of decision makers in Kathmandu.

While hundreds of people wait to enter Nepal across border points with India, they are just the tip of an iceberg comprising more than two million low wage Nepali laborers earning their livelihood in the neighbouring country. Somewhere in the crumbling corners of India’s massive cities, millions carry the hope that their leaders in Nepal will soften and help them find a way back to their homeland. For this stranded population, which is largely jobless and wageless at the moment, dengue, hunger and police brutality are as probable in their future as death by Covid19. In the midst of this, are their provincial and local governments going to just abandon them? Or is the state going to protect only those who are already settled within the comfort of their homes?

Measures taken by the government suggest that the coronavirus pandemic is being approached as an urban, transient problem. Subsidies on internet and electricity tariffs, tax deferments, relaxation of bank interests, and food subsidies by the Salt Trading Corporation ease the burden on urban residents and seem more suited to be part of a relief package for flood victims. Even information being shared on social media and other online strategies still fail to reach a population of Nepalis who perhaps need it most.

The crisis will persist until a suitable vaccine is developed, and that is months, if not years, away. Does this mean that we lock our citizens out of Nepal for months? A lockdown is one of many measures to be taken and provides an opportunity to prepare and strategise for more difficult times. If it isn’t accompanied by other equally necessary measures like rapid mass testing, relief support to the poor and bringing back vulnerable Nepalis stuck at the border, it may bring on another disaster.

Even though Nepali migrants stuck in India have not been the government’s priority, their strength and resilience is evident in how they have walked hundreds of kilometres, dodged border security, swam across rivers to finally make it back home. Stripped of their income in cities combined with the anticipation of reuniting with family has pushed them further into taking these desperate measures.

In order to manage the spread of the virus more effectively, it is essential for the government to welcome Nepalis back home. As thousands sneak in through a porous border illegally, there is a higher chance for the virus to spread.

Additionally, those being referred to as migrant ‘laborers’ are in effect farmers back home. Nepal is still largely a rural country and while political systems have changed, rural, impoverished lives remain the same. For any rural Nepali family from Karnali or Sudurpaschim, farming and seasonal out-migration to India are part of life. It is heartbreaking to see Nepali citizens who are exploited for their labor in India being denied their basic right to return home, waiting instead in a stateless limbo just across the border.

Cities in India and Nepal have been the go-to destinations for the poorest Nepalis who have neither cash nor the means to obtain passports or pay manpower companies to help them go abroad. They are often seasonal migrants, travelling into cities for work after harvesting and return before planting season. Currently, it is the time to harvest wheat in the Terai, herbs like Yarshagumba in the mountains while rice and millet planting season is soon to approach. To deny entry to migrants who would otherwise be farming back home will only exacerbate food shortages that already exist in regions like Karnali.

If the ruling class can muster political will, it will not be difficult to facilitate the return of Nepalis. For those stranded in Nepali cities, it is essential to arrange for transportation to help them return home, keeping in mind necessary precautions. Safe and compulsory quarantines at the point of arrival will reduce disobedience and negligence by returnees.

What will be incredibly unfair and inhumane is to have a scenario where farmers lineup in Indian and Nepali cities to receive food packages as part of relief efforts whereas they could be helping in food production if safely transported back home.

The Nepali version of this article was first published here on 4 April.