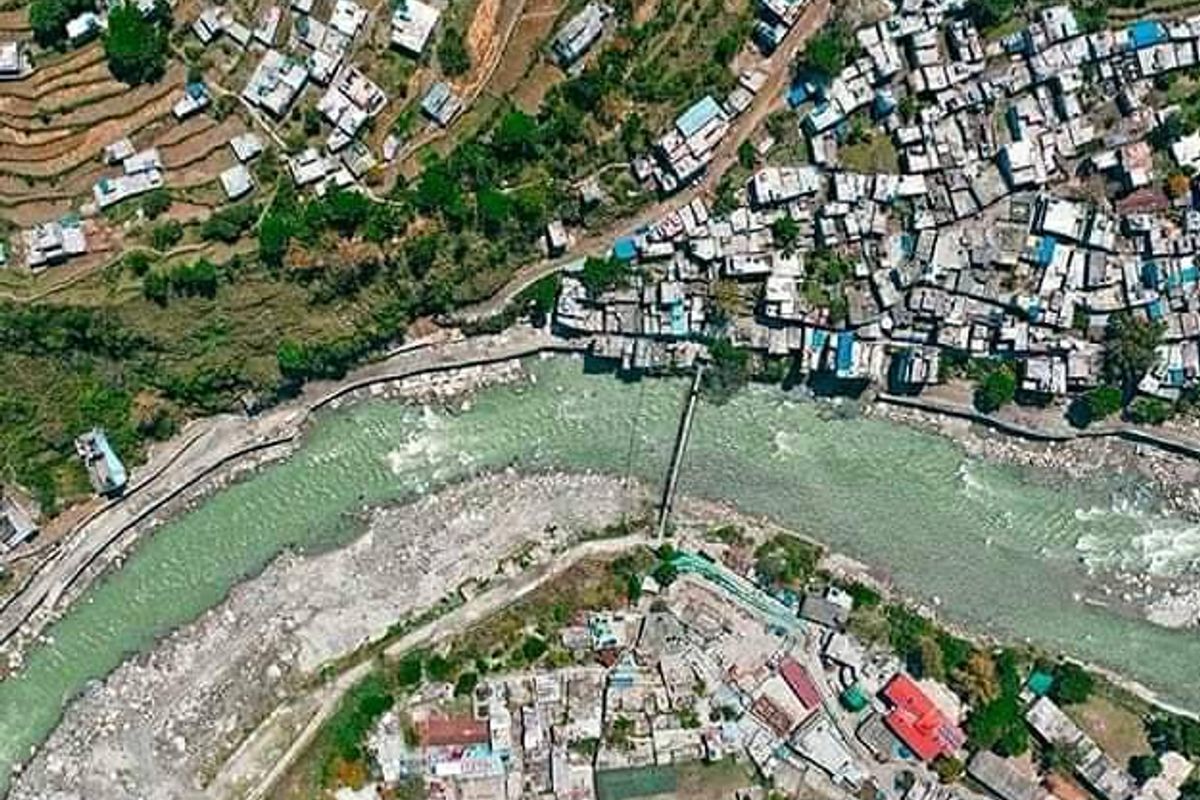 (The border between Darchula and Dharchula.)

Darchula is one of the few Nepali districts that borders both China and India. Long forgotten by Kathmandu, this district only came to the nation’s attention when a controversy arose over a new Indian map erupted in 2019. Parts of Darchula, including Lipulek, Limpiyadhura, and Kalapani, were included within Indian territory, leading the Nepal government, then under prime minister KP Sharma Oli, to issue a map of its own, incorporating the territory under controversy.

Darchula’s northern boundary consists of high mountains that separate it from China while the Mahakali river marks the border with India. This river flows through Lipulek, Limpiyadhura, and Kalapani. In the upper Byas valley, India and Nepal are connected by the Sita Bridge, and in the lower valley, by the Mahakali Bridge. The Nepali side of the Mahakali falls under Khalanga, Darchula, while the Indian side is known as Dharchula and is part of Pithoragarh district.

While Kathmandu might see Darchula as solely part of Nepal, as a border district, it has numerous connections with India. The Mahakali suspension bridge not only connects the geographies of the two countries but also connects the peoples of India and Nepal. The bridge is a lifeline for hundreds of Nepalis, as it is a major thoroughfare to get in and out of Darchula.

When the clock strikes seven in the morning, a green, zinc-plated gate on the Mahakali Bridge is opened by two Nepal Police personnel. As the day begins, so does movement across the border. While some go across, others come in. Some carry heavy loads while others cross empty-handed. Conspicuous among this crowd are those carrying strips of cloth in their hands. This cloth, or namlo, will be wrapped around their foreheads when they return carrying heavy loads on their backs.

After observing the scene for about half an hour, I, too, crossed the Mahakali Bridge and went over to Dharchula.

Crossing the bridge, Indian security personnel stationed at the gate of the bridge asked me, “What is in your bag?”

I opened up my bag and said, “There is a camera, sir, and nothing else.”

“Why did you come, sir? And from where?”

“I came from Kathmandu to visit,” I replied.

Near by, two female police personnel were noting down the names of those entering India. I too entered my name and moved on.

After you cross the bridge, there is a junction with a statue of Mahatma Gandhi. Nearby, there were lines of vehicles, along with shops and stalls. Around the streets, I could see numerous Nepalis with namlos looking around here and there. It looked like they were looking for loads to carry.

I started up a conversation with a middle-aged man wearing a dhaka topi. He told me his name was Jagat Singh Dhami. He was 35, and from Naugad Rural Municipality in Darchula. He had been working as a porter for almost 10 years now, he said. He crossed the border every day at 7 a.m. and returned at 5 p.m.

“We carry loads from India rather than from Nepal. From India, we carry rice, oil, sugar, salt, onions, vegetables, plastic slippers,” he said.

He started answering more than what I had asked. It looked like he wanted to tell me his story. He kept talking and I kept listening.

“What to do sir, I can't find work in Nepal,” he said. “In Nepal, to find a job, you have to have your own people. If I get a job in Nepal, I would not have to come to another country.”

Dhami worked half of the year as a porter in India and the other half farming in his village. The Covid-19 pandemic had made things difficult, he said. He had to stay home for over a year and couldn’t find any work.

“We are a big family with seven members — two daughters and a son, my wife, then father and mother, and a brother. I couldn't work during Covid because of the lockdown and the border was closed. It was difficult,” he said.

After chatting with Dhami, I started walking around the city. A group of Nepalis was unloading onion sacks from a truck. On the other side of the road, there was another group of Nepalis unloading cement sacks. It looked like all of the city's porters were Nepalis.

After observing the scene, I spoke to another Nepali man standing to the side of Gandhi Chowk.

“I have been working as a porter for 25 years,” said 50-year-old Bir Singh Dhami of Turmakhand Rural Municipality in Achham.

Bir Singh said that he worked as a porter to feed his family of six members, including him, his wife, two sons, and two daughters. How many loads does he carry in a day, I asked.

“That depends on how many I find,” he replied. “I can carry loads all day long.”

Bir Singh said that he goes home for a couple of months and lives in Dharchula for the rest of the year. He can’t stay long in Nepal as there’s no work there. In India, at least there is work, even if it might be little.

“Doing part-time is good for me,” he said. “For a full-time porter, the contractor can make trouble. If I work on a contract for six months, they sometimes only pay for one month. On a part-time job, I can be my own boss.”

Gradually, the day's Dharchula market began to stir. On the west side of Gandhi Chowk, I spotted four porters sitting. One was an old man, one was a woman, and two others were young men. I greeted everyone and started a conversation. First, I had a conversation with 49-year-old Manmati Badal from Purchaudi Rural Municipality in Baitadi.

“I am new here but I am already getting a job,” she said.

Badal’s husband had died recently and she needed to make some money for herself. Her two sons had moved away for work, one is in Dhangadhi while the other is in Bangalore.

“They work for their families. They take care of their world. They do not look after me,” she said. “Who will give me food? That is why I have to come here to work. Carrying a load pays well but sometimes some people cheat. Yesterday, one person told me they would pay me 50 rupees but when the job was done, they only paid 30 rupees.”

I then turned to the old man sitting next to her. He told me he was 69-year-old Uday Singh Bohora, also of Purchaudi Rural Municipality in Baitadi. He had been portering for 25 years and said that he would continue until he couldn’t carry anything anymore.

“It all depends on my health. I may die tomorrow or I may live to 80 or 90,” he said. “I don't drink alcohol but I smoke beedi. Whenever I feel tired, I smoke a beedi.”

After my conversation with porters working in Dharchula, I was on my way back to Nepal when I met another old man – 65-year-old Janak Singh Badal of Duhu Rural Municipality, Darchula. He had a tragic story to tell.

“I had one son that we brought up and sent to school carrying loads on our backs. He got married and got a job in the electricity authority. I was hopeful that I finally do not have to work anymore. But all my hopes were destroyed by Covid-19,” he said, tears welling up in his eyes. “I am in so much pain.”

Janak lost his son to Covid-19. In order to provide for his daughter-in-law and two grandchildren, he carries loads all day in Dharchula, returning to Khalanga in the evening.

“Sometimes I earn 400-500 Indian rupees a day, sometimes up to a thousand. My wife looks after the cows at home. What to do? At this age, such a disaster has occurred,” he said.

There is a lot of inequality in resource distribution. The poor are getting poorer by the day and the affluent are getting richer. Federalism might have provided more political space for people but at the grassroots, many are unemployed. The situation is dire.

Despite many political changes in the country, there has been no change in the lives of the poor, especially in the Far West. These are just a handful of stories from the Mahakali border. There are a million such stories from all over the country.

Who is responsible? How long will they have to continue to work? How long will Nepalis have to leave the country — whether by crossing the border to India or getting on a plane to Saudi Arabia — in order to find a job?

There are plenty of questions. But no answers.

The advantages, drawbacks, and alternatives to electric vehicles