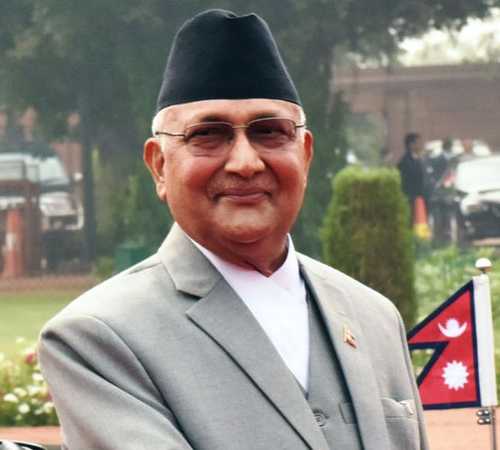 Nepal is officially known around the world as the Federal Democratic Republic of Nepal, the official name adopted by the Constituent Assembly in 2008 after the abolition of a 240-year-old monarchy. Government agencies, including Nepal’s overseas missions, have used it in their correspondence with foreign missions and governments since. But the name is to no longer be used for official purposes.

The decision to drop the term ‘Federal Democratic Republic’ from the country’s official name was made by the Oli cabinet with what it says is the intention to bring about conformity in the way Nepal is addressed. The Ministry of Law, Justice and Parliamentary Affairs has also sent a circular to concerned agencies telling them to write ‘Nepal’ instead of the ‘Federal Democratic Republic of Nepal’ in official documents and correspondence here onwards.

Although the government hasn’t made the decision public yet, the issue has garnered widespread media attention since Jana Aastha weekly, a left-leaning tabloid close to the ruling Nepal Communist Party (NCP), first reported on this decision in October. Opinions remain divided on the move; several leaders from across the political spectrum have opposed it, claiming that it raises fresh doubts about the Oli government’s commitment to institutionalising federalism, while others have welcomed it.

Madhu Raman Acharya, a former diplomat, claims that Nepal has not updated its new name at the UN. “In 2008, the government decided to name the country ‘Federal Democratic Republic of Nepal.’ At the UN, that would have moved our alphabetic position to ‘F’ from ‘N.’ As Permanent Representative, I wrote to  the UN saying we would continue to be ‘Nepal.’ It so remains at the UN,” he shared in a tweet. 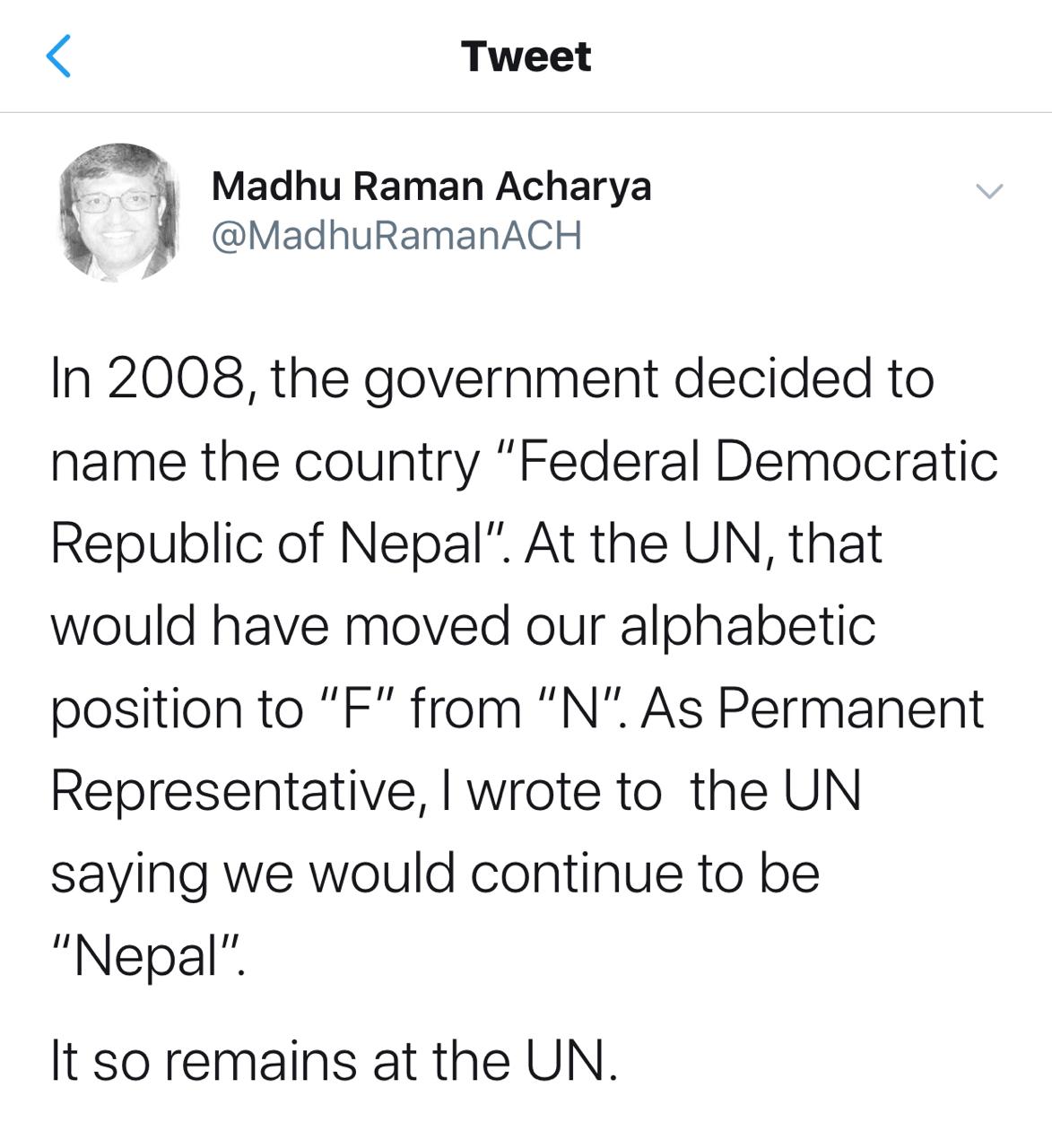 NCP leader Matrika Yadav, for example, demanded that the government scrap the decision, calling the move “an anti-federal act and an insult to the people’s war, the second people’s uprising, the Madhesh movement, and all the great martyrs” driven by personal whims rather than a respect for the constitution. Former Prime Minister Baburam Bhattarai and Nepali Congress spokesperson Bishwa Prakash Sharma have also voiced their opposition. Bhattarai described it as an ominous sign for the fledgling republic.

However, Oli’s loyalists as well as leaders of the Rastriya Prajatantra Party, the right-wing party fighting to restore Nepal as a Hindu kingdom, have lauded the government’s decision.

Legal eagles are also divided on whether the decision is a constitutional breach. Several experts have claimed that it undermines the spirit of the constitution which categorically states that Nepal is a federal democratic republic. “The main structure of the Federal Democratic Republic of Nepal shall be three levels — federation, the state (province) and the local level,” states Article 56 (1) of the Constitution.

“I don’t think the government’s circular to write just Nepal instead of the Federal Democratic Republic of Nepal breaches the constitution. It would have been objectionable had they written China, India, or Singapore instead of Nepal. If the inability to sustain federalism is what spurred this decision, I welcome it,” tweeted Acharya, who has openly been criticising federal setup, right from when the concept was first floated.

The Constituent Assembly declared Nepal as a federal democratic republic after dethroning the 240-year-old monarchy in May 2008.  Despite a protracted political transition with several ups and downs in the constitution-drafting process, Nepal refused to give up the democratic ideals of republicanism, federalism, and secularism until those values were institutionalised through the promulgation of a new constitution in 2015. The country saw a subsequent delineation of boundaries and an election of all three tiers of the government.

Five years down the line, Prime Minister KP Sharma Oli appears hell-bent to empower the federal government at the expense of provinces and local bodies. Since coming to power in 2018, Oli has repeatedly undermined the autonomy of the provincial and local bodies while allowing the already powerful federal government to be even more assertive on issues beyond its jurisdiction. The chief district officer — the administrative head of the district who serves as an emissary of the federal government — still holds greater power than the chief minister on key matters, including security and law and order.

In recent months, the Oli government has openly intervened in the administration of provincial assemblies. In October, Oli summoned provincial assembly members of the ruling NCP in Kathmandu and directed them to withdraw a no-confidence motion against Chief Minister Mahendra Bahadur Shahi. Last Thursday, the government of Province 2 filed a writ petition at the Supreme Court accusing the central government of delaying the process of handing-over jurisdiction of the state police.

The provincial and local governments have failed to justify their presence due to resource constraints as more than two-thirds of state resources still remain in the grip of the federal government.

On multiple occasions, Oli has defended his stance to centralise power, going as far as describing provinces and local bodies as administrative units of the central government. This view contradicts the spirit of the constitution which recognises all three tiers of government as autonomous and independent units, with rights to exercise their own judicial and executive rights, and stresses on the principle of coexistence, cooperation, and coordination among all three tiers.

Before discussing the motive behind his anti-federal activities, it's important to note that Oli was never a big fan of federalism. He publicly opposed the idea of federalism during the constitution drafting process. “The talk about achieving federalism through these protests is like trying to go to America riding a bullock cart. It's not possible,” Oli said during the people’s uprising in 2006. His party, the erstwhile CPN-UML, was forced to embrace federalism following pressure from Maoist and Madhesi parties who had greater say due to their strength in the parliament.

It's hard to guess what's driving Oli’s words and actions against federalism. It could be that he wants to be seen as a strongman. It’s also likely that he’s afraid that some provinces or chief ministers might overshadow him or his government and that his true intention, in fact, might be to take the country back to a centralised system of governance. Whatever the reason, Oli’s words and actions are not just weakening federalism but also hurting his own image. His stance also hurts his own party which runs the government in six of the seven provinces.

A powerful Singha Durbar is undoubtedly helping Oli steal the limelight, but the PM seems to have forgotten that the same limelight has also made him increasingly susceptible to a tsunami of accusations over bad governance, something that he could have shared with the chief ministers and mayors, especially at a time when the government has lost all credibility due to its failure to perform its most basic duties.

Dilly dallying with local elections over a discourse on legal conflict so close to the election date sets a terrible precedent for a young republic like Nepal.

The ruling Nepal Communist Party, among others, breaks the law to exclude women

They have three months to comply

In Madhes Province, voters turning away from Madhes-based parties