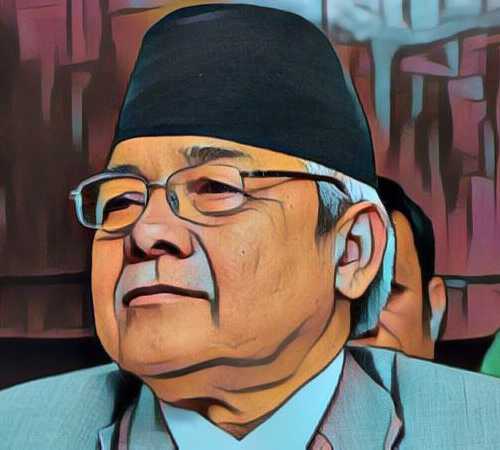 Former Deputy Prime Minister Bam Dev Gautam was defeated by the Nepali Congress (NC) candidate Sanjaya Gautam in 2017’s parliamentary elections. The ruling Nepal Communist Party (NCP) leader received 44,076 votes against Sanjay Gautam’s 44,829 in that contest, where the party had fielded Bam Dev from Bardiya-1, in a bid to make him a member of the House of Representatives.

After his loss, Bam Dev,  a senior party leader, blamed other top party leaders for his coming up short: he said his defeat resulted from a ploy to bar him from eventually becoming prime minister. While campaigning in that contest, Bam Dev had announced that he would make for a promising candidate for prime minister once the election was done. But he suffered a humiliating electoral defeat, instead. An internal probe panel formed to study why he had lost in a bastion of communism concluded that Bam Dev had only his own flaws to blame for his failure. And yet, with the recommendations arrived at during the recent NCP Secretariat meeting, Bam Dev’s future is looking exceedingly bright.

The recent turn of events represents quite a turnaround for the flawed candidate. In the internal probe conducted after his loss in 2017, party insiders said that the voters in Bam Dev’s constituency who were happy with his performance in the past had had a change of heart. Bam Dev has trodden a rather convoluted political path. After getting defeated in the 2008 election as a candidate from Bardiya, he contested 2013’s second Constituent Assembly election from Pyuthan. But because he was completely focused on Kathmandu’s politics, he had started neglecting the priorities of the people in his constituency. Furthermore, when he began his poll campaign, his wife, Tulsa Thapa, was also named as the party’s candidate to the Federal Parliament, under the Proportional Representation system. The husband-wife candidacy put off many voters, who felt that there were other deserving party leaders in the district.

But despite the internal report’s findings, which highlighted his weaknesses, Gautam never sought to rectify them. Instead, within the party, he continued to lobby for his entry to the House of Representatives. He asked that the party either vacate an electoral constituency from where he could easily win an election or amend the Constitution so as to allow him to secure a seat in Parliament.

In his bid to pave his path to the Parliament--and subsequently claim the prime ministership--he approached his party’s lawmakers from Kaski, Dolpa, Kanchanpur, Kathmandu, Banke, Palpa, and many others districts where his chances of winning were high. But all his attempts ended in failure--for a couple of reasons. For one, PM KP Oli was reluctant to help him get to Parliament. And two, many of his elected comrades refused to vacate their seats because doing so would constitute a great betrayal of their voters and because the move would have lasting implications for their own political careers. And even though some MPs, like Dhan Bahadur Budha of Dolpa, were initially willing to make a ‘sacrifice for his senior comrade’, his voters in the remote district protested against the idea. They argued that vacating his seat for a party leader they were not familiar with would tantamount to the party’s disregarding their votes.

These arguments convinced Budha, and he later backtracked from his previous position. But fortunately for Bam Dev, Ram Bir Manandhar, a trusted leader in the party, later announced that he would resign from the post of lawmaker and vacate the election constituency in Kathmandu. But the party’s Secretariat, the apex body within the ruling NCP, vehemently opposed the idea and rejected the resignation bid by the elected lawmaker.

The party said that there was no point in vacating the election constituency for Bam Dev’s sake because his victory wasn’t very likely. But that was merely public posturing. In reality, PM Oli himself was not happy with Bam Dev’s role in the party--for he was perpetually criticizing the government and getting involved in campaigns to topple the government.

Bam Dev’s machinations irked Oli so much, the PM refused all proposals floated in the party meetings aimed at naming Bam Dev as a lawmaker in the Federal Parliament. But Oli was recently forced to recommend Bam Dev as a member of the Upper House because the PM realized he had become historically weak in the party: many of Oli’s comrades, including Madhav Kumar Nepal and Jhala Nath Khanal, had started combining forces in order to unseat him from power. A majority of the top leaders stood against Oli, and were warning him that they would bring down his government.

Shortly after snagging the recommendation, Bam Dev publicly stated that he would push the executive chief to name him as a minister to the Federal Parliament--even though the Constitution bars Upper House members from leading the ministry for a long tenure.

No one knows whether Bam Dev will get a ministerial berth or whether the Constitution will be amended to allow for his ministerial appointment until the next election.

But the ruling NCP continues to be widely criticized for sending to Parliament poll losers and for advocating on behalf of leaders like Bam Dev. Observers have questioned whether election outcomes have any meaning when poll losers can be named members of parliament--through the use of back channels, in blatant disregard of the people’s votes.

“We have envisioned a democratic system that’s better than those in many other countries. But the way we are working is really worrying,” said former Chief Election Commissioner Neel Kantha Uprety. “Elections don’t really matter if some people are to be brought in through other means, all because they have to be in power at any cost.”

Bam Dev is not the only lucky poll loser who has got the opportunity to be a parliamentarian.

Earlier to this, NCP’s spokesperson, Narayan Kaji Shrestha, who was earlier defeated in the Gorkha constituency by former Prime Minister Baburam Bhattarai, was picked as a candidate for Upper House member after his victory was guaranteed because the NCP had won the most seats for provincial assembly members, chiefs, and deputy chiefs of local units in the 2017 elections.

As expected, Shrestha emerged victorious. But Shrestha, who often preaches to his party cadres about moral values, didn’t hesitate to join the National Assembly less than two years after being defeated in the polls.

In a similar manner, Bhagwati Neupane, who was defeated in a municipal election, was also later fielded as candidate in an election to the Upper House. She won in that indirect election and is now working as an Upper House member. In her contest for the post of mayor in Tanahun Bhanu Municipality, Tanahun, in the 2017 local elections, Neupane had been defeated by NC candidate Udayaraj Gauli. But two years after that defeat, in January this year, the NCP presented her as a candidate to the Upper House, after the terms of 19 Upper House members expired, as per constitutional provisions.

Another mayoral candidate, Bimala Ghimire from Kapilvastu, was also elected to the Upper House. Ghimire was defeated by Mangal Prasad Tharu of the Nepali Congress in 2017’s local elections, in which the party had fielded her as mayoral candidate for Banganga Municipality.

Jag Prasad Sharma is another lucky politician to get a higher position after having been defeated in an election to a lower body. In 2017’s provincial assembly elections, Sharma was fielded as the candidate from Dang. He couldn’t win the election. But the NCP fielded him as a candidate for Upper House member this year when his victory was almost certain in an indirect election.

The number of Public Interest Litigation cases is rising every year and while this could be a good thing, many are simply being filed for publicity and to fulfill personal interests.