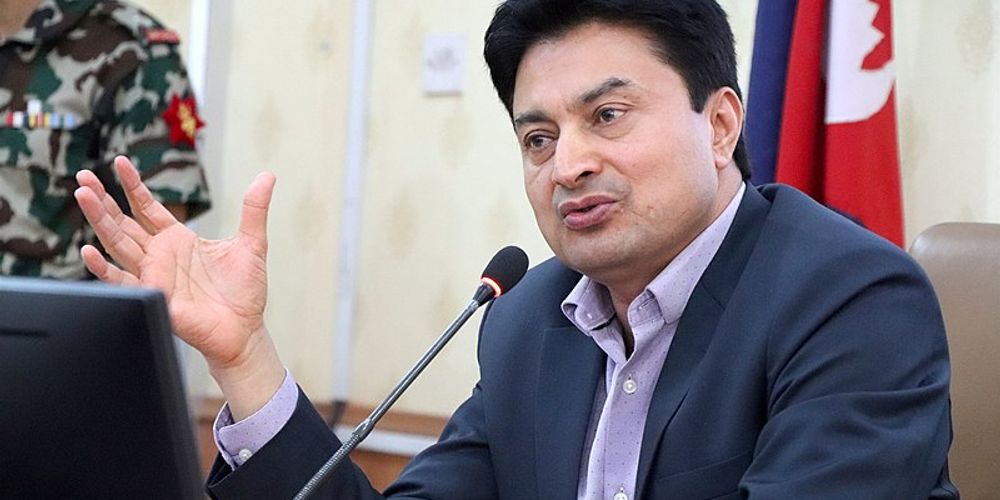 It has been instructive to follow media coverage of Gokarna Bista being relieved of his duties as Minister of Labour, Employment and Social Security in November’s Cabinet reshuffle.

The papers were full of praises for Bista, who they portrayed as an honest minister who challenged the foreign employment mafias. Some had slightly less grandiose claims, but nevertheless saw his tenure as entirely positive. The general consensus was that Bista had fallen prey to “entrenched interests and political horse-trading.”

The labour industry has long been exploited by human traffickers and other actors willing to make a fast buck off the misery of their country people. Corrupt agents, bureaucrats and police officials have long had the power to ruin people’s lives or at least make it very hard for workers.

It was in this scenario that Bista appeared, with a far clearer vision than any politician had presented so far. The government would help migrants, yes, but Bista was also obsessed with creating employment opportunities at home. He declared, perhaps hyperbolically, that no Nepali would have to leave the country for work in five years’ time.

Bista’s record is certainly more illustrious than that of many other ministers. He fast-forwarded long-stalled plans to decentralize the recruitment process by expanding the Department of Foreign Employment (DoFE) outside Kathmandu the capital and to be more worker-friendly. Workers are no longer required to come to Kathmandu to apply for jobs or complete the tedious paperwork; this saves them time, money and stress. Families of migrants who have died abroad can now receive the compensation they are owed in their home districts. Bista appeared determined to protect workers from fraud and exploitation, and took concrete steps to promote transparency and accountability at the DoFE. His decision to conduct daily instead of weekly hearing on fraud cases at the DoFE is already helping reduce cases of fraud.

Bista also reached out to countries where Nepalis work. Where all his predecessors since 2000 failed in doing so, he concluded a labour agreement with Malaysia that included protections for workers. He also oversaw the signing of new labour accord with Mauritius, and renewal of agreements with the United Arab Emirates and Japan. All these agreements reinforce Nepal’s free-visa-free-ticket policy, a low-cost recruitment scheme where employers bear most of the cost of recruiting and transporting workers. Thanks to the minister’s attention, stranded workers were evacuated home, including some from hospitals overseas.

Certainly his most ambitious project, one that would be a true legacy for the Oli government, was the introduction of the social security scheme, which seeks to bring all private-sector workers, including those in the informal sector, under a social security and welfare net. So far, more than 60,000 workers have been enlisted to the program.

Also Read: The best thing the KP Oli administration has done for workers’ protection so far

So far, so impressive, and with this perspective you can see why many were outraged at the prime minister’s suggestion that Bista had been replaced because of poor performance.

But this narrative is only half the story. There was a less impressive side to Bista’s tenure, that included allegations of misuse of power, and many ironies and contradictions.

One of his most controversial decisions was to scrap the licenses of manpower agencies which failed to deposit with Nepal Rastra Bank sums ranging from Rs 5-20 million (approximately USD 45,000-180,000) depending on the number of migrants they recruit annually. Companies were also required to show guarantees ranging from Rs 15-40 million (approximately USD 136,000- 363,000). Previously, recruitment companies only had to provide a combined deposit and guarantee of NPR 3 million to operate.

Some 300 recruitment companies collapsed; a few hundred more are likely to follow suit. It was a populist decision taken, some allege, under the influence of big, powerful manpower agencies, some of which have a checkered history of document forgery, defrauding workers and even human smuggling. Some of the smaller companies, now closed, had the opposite reputation, of being reliable and trustworthy. Now not only do workers not have access to them, their own staff are out of a job.

There is a real struggle for monopoly over the labour market, and such a move inevitably affects how that plays out. The rational way to judge companies is not based on deposits and guarantees, but more relevant criteria, including their past record and compliance with the free-visa-free-ticket guideline.

Industry professionals suggest that the bank deposits may fuel bad practices: some of the companies that met the new requirements did so by taking large, high-interest loans that they cannot possibly repay simply by following the rules and sending more workers abroad.

Bista’s much-lauded efforts against the syndicate of service providers that made money of Nepali migrants at every step of the process was also not especially well-executed. When the government of Malaysia refused the Nepali side’s request to open up licensing of providers of health and biometric screenings in order to lower prices for migrants, Bista’s response in May, 2018 was to ban Nepalis from going to work in Malaysia. The following year negotiations continued regularly on the labour Memorandum of Understanding between Kuala Lumpur and Kathmandu in 2019 that included, among other things, free visas and free tickets. The MoU was signed in October 2019, after months of positive progress, but Bista remained reluctant to lift the ban, and was unable to justify his reluctance. Once again, allegations of misuse of power began to surface, namely that Bista was trying to pressure Malaysia to scrap its agreement with the visa processing service here, VLN Nepal, in order that businesses close to him might be able to take over the job, which earns VLN billions of rupees of annual turnover.

The unexplained delays in lifting the ban did not only cause extreme hardship to thousands of workers, but also strangled demand for Nepali workers, as Malaysian companies began approaching other labour sending countries. “The first months of the  ban did force Malaysia to sign the MoU, but by needlessly continuing the ban for months, the government increased hardship of the workers,” said a member of Niti Aayog, a government think tank.

Finally, Bista’s promise of ending foreign employment in five years was ambitious to start with, but began to look seriously misguided in light of his handling of the Prime Minister’s Employment Program. Critics say that the Oli government and Bista used the program as little more than a means of dispensing patronage to the cadres of their Nepal Communist Party.

All of these points are as open for commentary and scrutiny as those Bista is lauded for. So why did we read so little about them? Part of the answer lies in the general social craving for heroes—and the media is a part of society. Part of it lies in an impatience with complicated stories. Part of it is the result of the very limited political agency we have. Prime Minister KP Oli is often criticized by some on the more liberal end of the media spectrum. So when he fired a minister who was clearly trying to take a new approach to the labour sector, which everyone knows is a mess, it was easy to take the firing as a prime example of everything the PM does wrong. But two wrongs hardly make a right, and entirely overlooking one person’s faults because doing so strengthens the case against a greater enemy is not helpful.

Some of Bista’s NCP colleagues were alert to the media circus, and perhaps envious of the former minister’s ability to make a splash. When it was time for Bista, who has a private vehicle, to leave Singha Durbar, he had a camera-friendly walk around the premises in search of a taxi, trailed by journalists. “He could have used his own vehicle or government vehicle,” an NCP member said. “The drama was quite  unnecessary.”