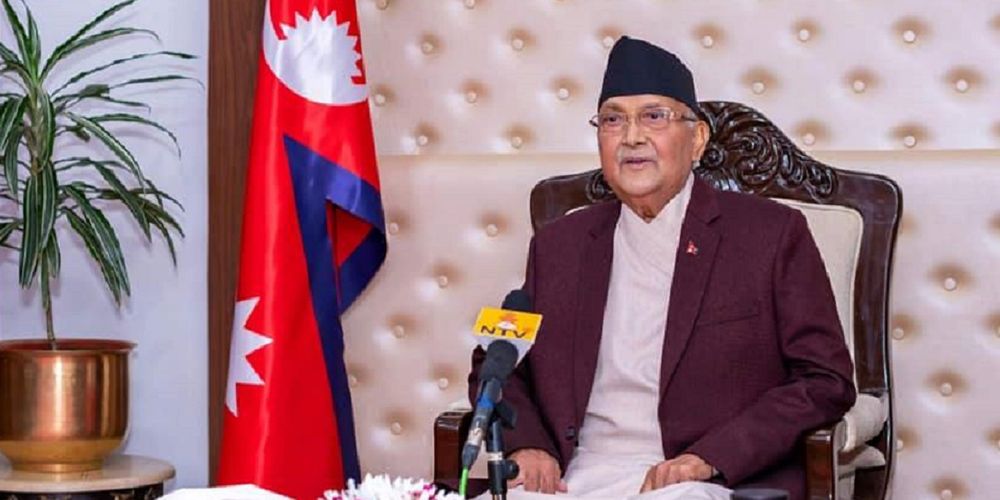 PM KP Sharma Oli has reassured the public about his government's commitment to fighting Covid19 amid rising fears over a possible outbreak in the country.

Addressing the nation for the first time since undergoing a kidney transplant earlier this month, PM Oli on Friday said the government was doing everything it could to prevent possible mass exposure to the virus through awareness, quarantine, screening and regular monitoring of the situation on the ground.

PM Oli then listed several decisions taken by the government as preventive measures. He announced a complete shutdown of public transport services and international flights and closure of all offices except ones offering emergency services. Even before Oli's announcement, the Supreme court, following a full court meeting, had announced its decision to close all courts across the country until April 4.  The SC, however, would continue to accept cases of urgent public importance like habeas corpus. A day earlier, both Houses of the Federal Parliament announced they were suspending all proceedings until March 26.

Oli's address comes amid growing criticism of the government's lackluster approach in its preparedness towards dealing with a potential crisis.

"It's not easy to fight against pandemics. We have to change our lifestyle and habits," said Oli. While acknowledging the limitations of the government's efforts, he appealed for support from the public to tackle a possible crisis.

The government will bear all expenses incurred during the course of treatment of people suffering from Covid 19, said Health Minister Bhanu Bhakta Dhakal, at a program in the capital on Thursday, 19 March.

Read also: ‘We are well prepared, for at least a month’

The government has also announced a special incentive package for health workers in the frontline of the fight against coronavirus.

Finance Minister and spokesperson for the government, Yuwaraj Khatiwada, has urged stranded Nepali migrant workers to get enrolled into the Prime Minister’s Employment Fund. The government has stopped issuing work permits to migrant workers, thus effectively prohibiting them from leaving the country for overseas jobs. Several labor-receiving countries like Qatar are also in lockdown due to fear of a corona outbreak.

“Don't say I will only do table work. Taking up small jobs doesn’t make us small," urged Khatiwada on 19 March.

Khatiwada's remarks come at a time when pundits are predicting a collapse of the remittance economy due to global panic over coronavirus.

The Special Court on 16 March sent former land revenue officer Krishna Prasad Paudel to judicial custody over his alleged involvement in the Lalita Niwas land scam. A division bench of judge Shivaraj Adhikari and Chandra Bahadur Saru gave the order after initial hearings on a charge sheet filed by the Commission for Investigation of the Abuse of Authority.

In the charge sheet, the CIAA has sought 8 to 10 years' sentence and a fine of around Rs 322 million from Poudel, who is among the main accused in the case. Besides Paudel, 174 individuals including current and former tenants, bureaucrats and a former cabinet minister face charges in the high-profile case.

The scam involves the illegal transfer of 299 ropani of government and Guthi-controlled land within the vicinity of the prime minister’s residence in Baluwatar to various individuals. The land deal also included transfer of 3 ropani and 10 aana of land located on the premises of the Prime Minister’s residence, and 2 ropani and 14 aana of land on the premises of the residence of the Supreme Court chief justice to private individuals.

A National Assembly committee on 19 March revised a clause of the Special Service Draft Bill that, once endorsed, would allow the government to intercept anyone's telephone without a court order.

According to the proposed draft, the chief of the National Investigations Department will have full authority to tap phone calls of any individual if doing so is deemed necessary on grounds of national security.

Opposition lawmakers have criticized the provision, saying the government could misuse it to take action against political opponents and dissidents. The NID is currently under the prime minister's office, and most of its cadets are political appointees.

The Commission of Investigation on Enforced Disappeared Persons (CIEDP), one of the two transitional justice mechanisms investigating war-era crimes, on 17 March released a verified name list of 2,506 people who were disappeared by the state and the then Maoist guerrillas during a decade-long insurgency that lasted from 1996 to 2006.

Nirajan Ghimire, a spokesman, said the CIEDP decided to publish a detailed list on the organization's website hoping to receive any additional information regarding the disappeared persons' whereabouts.

“This is a verified list of disappeared individuals that requires detailed investigation. Anyone who has any information about these disappeared people can come forward to share it with the commission. We will then start interviewing family members, eyewitnesses, and perpetrators,” Ghimire told the Record.

The CIEDP and Truth and Reconciliation Commissions have been facing growing criticism over sluggish pace of investigations into allegations of human rights violations and crimes against humanity. So far, over 63,000 complaints have been collected from the victims and their families.