Many schools across the country have been charging full fees despite providing no extra facilities. 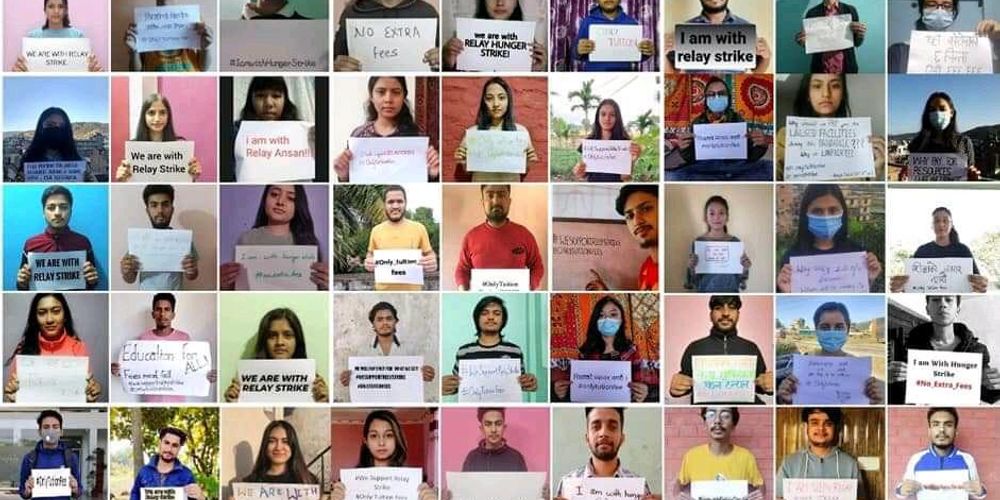 Around this time last year, Shailesh Mishra’s mobile phone was flooded with phone calls from troubled students in the wake of an unceremonious email from Kathmandu University. The email demanded that students clear all their dues; if they did not, they would not be allowed to sit for their exams.

The news put students in a state of panic.

“The families of many students were drowned by financial burdens; there was no way everyone could pay the full fees,” said 22-year-old Mishra, a student of civil engineering at the university and a member of its student council.

Following the lockdowns in early 2020, an unprecedented economic stasis had rattled the nation. Many people lost their jobs or were working on half their salaries. Amid such a situation, for the universities to demand that students pay the full fees was unjust, students say. In the months that followed, the university’s student body discussed the matter with the administration.

“The entire student body rallied together and discussed the matter through online conference calls. Our teachers and professors also supported our cause. We also safely and peacefully conducted a hunger strike on November 8,  demanding the college exclude extra fees from our tuition,” said Mishra.

Another issue students couldn’t come to grips with was the fact that they needed to pay full fees even though all of the university facilities and resources, such as computers, laboratories, internet, and transportation, had not been used by the students due to the lockdown, says Mishra. After four days of hunger strikes organized by the students, the KU management declared that it would provide student discounts and mobile data packs, and lift the pressure off of students  to pay the fees immediately.

But a year later, in the midst of a second Covid wave, students are once again facing the same ordeal: institutions are asking students to pay their fees, including those for internet and computer facilities, vehicle services, workshops, and services that are not being used by the students. All of these charges add up to more than Rs 30,000. They are also being asked to clear dues from last year.

Since April, after a parliamentary committee instructed the government to immediately stop conducting physical classes, education has once again gone virtual.

“My father is a retired teacher and he pays my fees. But even if payment is not too difficult, there is logical payment and illogical payment. What we are trying to make the authorities understand is that we will pay the tuition fees but we will not pay the additional fees,” said Mishra.

As government relief, on May 29, as finance minister Bishnu Paudel presented the annual budget for the fiscal year 2021/22, the government declared Rs 180.04 billion has been allocated for education programs, including incomplete projects from past years. From the separated budget, up to Rs 2.5 million has been segregated for student loans with a 5 percent interest rate for Bachelors-level students. A Rs 80,000 loan for students was also announced for students to buy laptops.

And while the initiative is forthcoming, it does not address students’ immediate problems, say students.

“Instead of student loans, I think the education ministry should come up with Covid financial assistance to help students who cannot pay fees at all. As for students whose financial state is not that bad, a discount on the total fees should be provided for the affected semester,” said Mishra.

Acknowledging the demands of the students, Kathmandu University last year provided Mishra and his batch with an 18 percent discount on fees for their 2020 spring semester. Similar discounts were given to all batches, Mishra says, adding that he hopes the university will provide a discount on this year’s affected semesters too, this time without any hunger strike or protest.

“I think the full fee payments should not be a compulsion at this time; instead all the parents should be given the freedom to pay it little by little,” said 17-year-old Kritika Koirala, a Plus Two student at Bright Future School.

Just like Mishra, Koirala also received a discount from her school last year. Both academic institutions, along with many other schools, had provided students with financial difficulties discounts and allowed everyone time to pay their dues.

“My school did an excellent job in assisting the students. They provided full scholarships to students with good grades as well as discounts on a case-by-case basis according to the financial condition of each student, ” said Koirala.

But the case isn’t the same with many other schools in the Valley. Agrima Shrestha, 18,  an A-level student at Global College International, says she did not receive any help from her college.

“Our college didn’t and will not provide a single discount on our fees. Global College is very strict regarding fees,” said Shrestha.

Shrestha’s father is a freelance movie script writer who has not had any work since the pandemic. Her father has managed to pay her fees through his savings, while her mother, a government school headteacher, is now managing all their household expenses.

“The Education Ministry should come with flexible rules regarding fee payments, considering the situation of every Nepali family,” said Shrestha.

The lack of decisive action from the Education Ministry during these difficult times has allowed privately owned educational institutions to decide discounts on their own, which has resulted in a disparity among students across Kathmandu, even across the country.

“We have not spoken about fees yet because the Nepal government hasn’t released anything on that matter,” said Kumar Ghimire, general secretary of  Private and Boarding School’s Organisation Nepal (PABSON). “We are waiting for their decision but we as an organization haven’t had any discussions on the student's fee matter yet.”

PABSON has prioritized access and training for online teaching and learning modality but has not instigated a discussion on the fee issue in anticipation of a government decision. The organization has instead been mobilized in connecting schools with online educational service providers, training, and workshops to teachers for online platforms, and requesting cheaper access to student data packs from NCELL and NTC, Ghimire said.

“We request that the budget allocated for students by the Nepal government is not discriminated between public and private sectors. It should be equally accessible to all,” said Ghimire. “More students are studying in private schools and colleges and many of them are also struggling from poor economic conditions. Regarding eligibility for these government services or laptop purchases, for instance, either economic category should be made or all students should get equal access to this service.”

Providing student loans is an option to provide financial assistance but the debt that will be incurred in the process might have long-lasting effects on the financial lives of the students and their families. The United States is a prime example of how student loans can go wrong resulting in many loan-takers living paycheck to paycheck even several decades after graduation.

“Loans could only further exacerbate financial problems. The best Nepal government can do now is to create a Covid-19 financial assistance plan for students who are dropping out of schools and colleges because of no financial support to pay fees,” said Mishra.

How the equity gap affects access to Covid tests and treatment

While the affluent can pick and choose, for many who are poor, Covid treatment is a distant reality