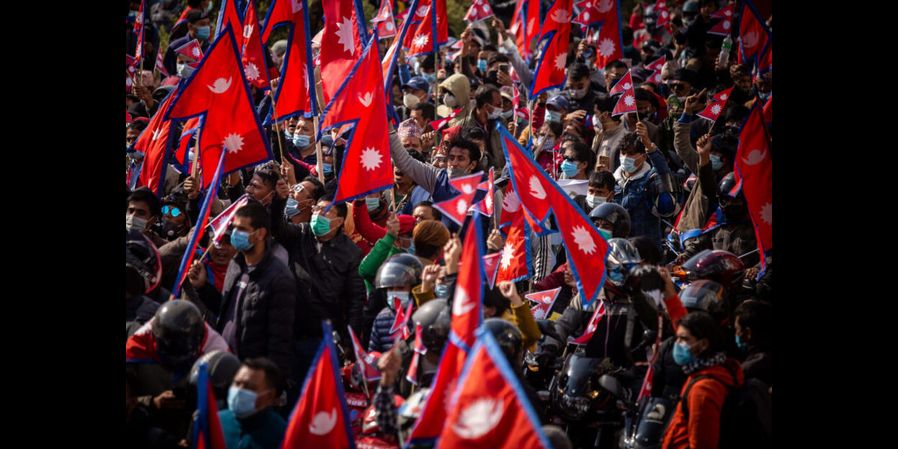 For weeks now, royalists and Hindu groups have been organising mass demonstrations across the country demanding that Nepal be reinstated as a Hindu kingdom. The demonstration which was initiated by lesser-known royalist groups with sporadic motorcycle rallies has slowly gained momentum with each passing day and now boasts the participation of political parties like the Rastriya Prajatantra Party (RPP).

On December 5, tens of thousands of people took to the streets in major cities across Nepal. Arguably, the biggest demonstration was seen in Hetauda and Jhapa, the district in eastern Nepal that Prime Minister KP Sharma Oli hails from. Thousands of people descended to the streets, many with the national flag and placards demanding the restoration of monarchy. Others even chanted slogans against federalism and the major political parties who they accused of being corrupt and out of touch with the suffering of the common folk. More protests are being planned in the coming weeks to intensify calls for the restoration of a Hindu kingdom in a development that has excited some but worried many others.

In all this, royalist and Hindu groups are thrilled to see growing public support for their ideals. The pro-Hindu, royalist parties — which took ownership of the new constitution with reservations over republicanism and secularism — have long tried to wage mass protests, but failed on multiple occasions, largely due to the lack of public interest in these issues. The parties had also failed to perform well in elections, largely due to disunity among royalist forces and a poor cadre base, but equally due to the parties’ failure to attract people with their Hindu-centric monarchical agenda. The current protests show that royalists forces have regained considerable strength with the recent unity between the three offshoots of the Panchayat era Rastriya Prajatantra Party. Energised by the growing support, leaders like Kamal Thapa are looking to build on the current protests to fuel a full-fledged movement to establish their agendas — an order that looked as tall as Mount Everest until only a few years ago.

On the other hand, the secular and republican forces are following the ongoing development with great fear and anxiety. The main reason behind this fear is not the ongoing protest, or the growing public support for royalistic and Hindu causes, but the ominous silence of mainstream political parties and leaders. Very few leaders of major political parties have actually voiced their opposition to these protests. The Oli administration has remained a silent spectator, although the protest comes in clear defiance of Covid-19 related restrictions. The Nepal Police, who had prevented Nepali Congress senior leader Ram Chandra Paudel from attending a small gathering, have silently watched thousands of people storm the streets, many without masks, with their demands to bring back monarchy. Prime Minister KP Sharma Oli, who likes to comment on everything under the sun, has been surprisingly silent on this issue.

For many political pundits, the current protest is less about a Hindu kingdom and more about PM Oli and his administration's failure to deliver on its promises. They think the left government’s failure is making more people nostalgic for and sympathetic towards a Hindu state led by a monarchy. PM Oli’s own efforts to ride on a wave of Hindu nationalism has also given currency to what was once thought of as a lost cause. In his desperate bid to cover up his government's dismal performance, Oli has deliberately been fanning the Hindutva agenda. His remarks on the birthplace of the Hindu deity Ram or the sage Balmiki were attempts to appeal to a Hindu base. These remarks may have given Oli some momentary relief from criticisms over his misgovernance and the widespread corruption under his tenure. In turn, he has greatly reinvigorated a silent mass that had long been waiting for an opportune moment to push its agenda for a referendum on a Hindu monarchical state.

During an all-party meeting organised to discuss the current political development on Tuesday, several leaders questioned Oli’s silence on the ongoing protests. Some leaders have suspected that Oli could be trying to use the ongoing protest for political gain. Oli has long faced questions over his commitment to such historical achievements as federalism and secularism due to his silent support for the monarchy as well as his recent move to change the country’s official name from the Federal Democratic Republic of Nepal to just Nepal.

Others are worried because they see the involvement of foreign hands in the protests. They believe that the ongoing protests might have to do more with the rise of the BJP in India than with local politics. They fear that the BJP might be trying to reinstate Nepal as a Hindu state given its own priorities. It is thought that the push for a Hindu state in Nepal could give the BJP a clear edge over other secular forces in the upcoming state elections in Uttar Pradesh and eventually in Vidhan Sabha elections.

While all of these factors may have played some role in the ongoing protests, the appeal of populist agendas like the Hindu state and monarchy in the general public should not be underestimated. The lack of research makes it hard to ascertain the popularity of these agendas, but it is quite evident that there is a large base that is unhappy with secularism. Many others still believe that the king is the reincarnation of lord Bishnu. Such groups existed in the past, are amongst us now, and will persist in the future. They do not, however, pose any imminent danger to secularism or republicanism. Instead, there is always the danger of political forces and leaderships cajoling the masses with populist ideas and fanning the flames of Hindutva when it suits them, all the while reaping the fruits of secularism and republicanism.