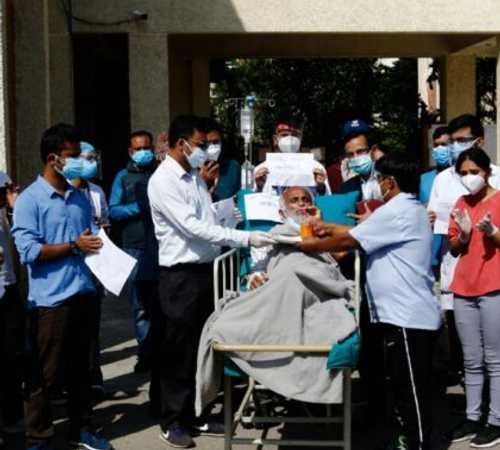 Satyagrahi Dr Govinda KC has ended his hunger strike following a written commitment from the government to fulfill his demands for larger reforms in public healthcare and medical education. The 63-year-old orthopedic surgeon ended his fast-unto-death by drinking some juice on the 28th day of his fast early Sunday, a day after he signed an eight-point agreement together with government representative Gopi Nath Mainali. The agreement was reached after a dozen rounds of talks between the government and Dr KC.

By signing the agreement, the government has agreed, in principle, to address all of Dr KC’s demands except the demand for investigations into all allegations of corruption against the Oli government. Dr KC had started his hunger strike with a six-point demand in Jumla on Sept 14. He was later airlifted to Kathmandu when his health started failing.

One of the major takeaways from the agreement would be the government’s commitment to increasing investment in medical education. The Oli government has agreed to help provide the infrastructural and human resources needed to start an MBBS programme in the Karnali Academy of Health Science from the upcoming academic calendar. The government has also reiterated its commitment to starting MBBS and other programmes at the proposed Geta Medical

Similarly, the government has also agreed to explore the possibilities of opening a new medical college each in Dadeldhura, Udayapur, and Ilam Panchthar, while fast tracking the work on the proposed Ram Raja Prasad Singh Academy of Health Sciences in Province 2.

In response to Dr KC’s demands, the government has also given assurances that it will increase Covid-19 testing and strengthen the capacity of existing health facilities to improve the treatment of Covid-19 and other diseases. The government has agreed to allocate the necessary budget to Bayalpata Hospital, a not-for-profit hospital providing treatment to some of the country’s poorest people. The hospital has been struggling due to a budget crunch amid shrinking support from its donor agencies.

As part of the agreement, the government has also committed to filling all medical-sector vacancies by appointing staff on the basis of seniority--through free, fair, and transparent procedures, as per the recommendations of a task force formed to set the guidelines for such appointments. Dr KC has long blamed anomalies in these appointments as the source of most of the problems facing the medical sector.

Although the agreement mainly includes the government’s commitments to addressing an accord signed with Dr KC in the past, it does signal a symbolic victory for Dr KC and his supporters, who believe that the aforementioned reforms will increase poor Nepalis’ access to healthcare and medical education. In recent decades, amid the growing number of private medical colleges, the government’s spending on medical education has been  decreasing. The increasing privatization of medical colleges has not only prevented students of poor economic backgrounds from enrolling in medical programmes but is also making it harder for people to get affordable healthcare.

The success of the agreement will depend on how sincerely and how soon the government starts delivering on its promises: the Oli government is known for overpromising and under-delivering.

But unlike in the past, the Oli government is certain to face greater pressure and more media scrutiny to implement the agreement, given the increased public support for Dr KC’s cause. Since the onset of the Covid-19 pandemic, more Nepalis have realized the cost of not having a good healthcare system.

After Dr KC began his hunger strike in Jumla in late September, health workers and members of the general public across the country started protesting to mount pressure on the government to fulfill his demands. In fact, the growing support for Dr KC’s cause was the chief reason the Oli government was obliged to agree to meet all of the striking surgeon’s demands.

Dr KC’s latest strike is significant for its timing, as the Oli government has been coming under growing media and public scrutiny for failing to contain the coronavirus. Nepal has already registered more than 10,5684 confirmed Covid-19 cases and 641 deaths.

Dr KC’s demand for checking the increasing privatization of the medical sector, along with his demand for more public spending on medical education, is likely to resonate with health workers, medical staff, and the general public. The Covid-19 pandemic has starkly exposed the dark underbelly of the Nepali health sector, which remains in the grip of private entities, especially in major cities. Patients, especially with preexisting health conditions and those suffering from Covid-19,  are finding it hard to get admitted to hospitals. The Record has found that hospitals’ refusal to admit patients has resulted in nearly 2 dozen deaths since March. Furthermore, some health workers have been forced to work for months without pay or are getting partially paid.

Since his first hunger strike demanding reforms in medical education, in 2012, Dr KC has held 18 hunger strikes--over the tenure of six governments--with little success. Though some of his very early demands still remain unaddressed, his non-violent strikes have slowly but surely pressured the government to invest more to improve medical education and increase people’s access to affordable healthcare.