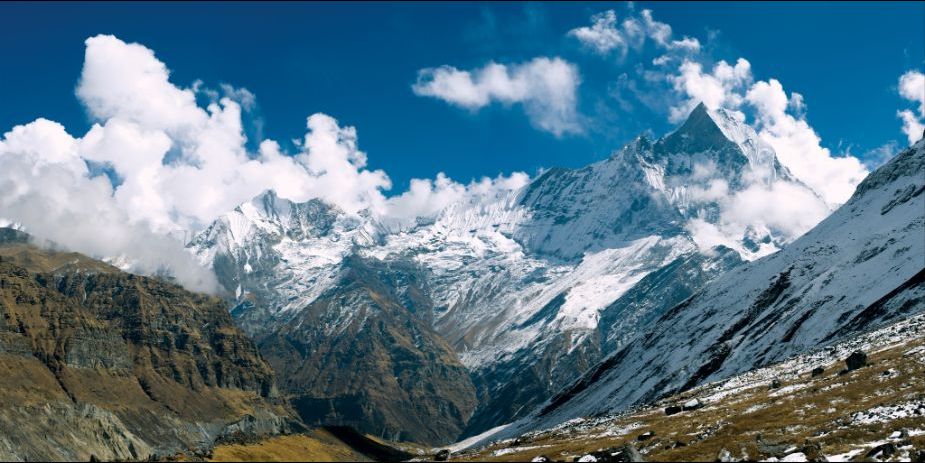 Had it not been for the Covid-19 crisis, hordes of mountain lovers would have been passing through Pemba Sherpa’s Buddha Lodge, in Gorakshep, in the Everest region. The lodge owner would have had a difficult time handling client requests for accommodation in his already overbooked hotel. He would have had to ask tourists to trek a little farther to find rooms--that is, were they still available.

But the entire Everest region--among Nepal’s most popular tourist destinations--and the rest of Nepal’s tourist hotspots have been tourist-free ever since Nepal enforced a nationwide lockdown in the last week of March. The impacts have cratered the tourism industry.

Pemba has already laid off eight of his 12 employees, and the two hotels he owns remain shuttered. For almost three months, he has been growing potatoes in his village, Pangboche, because he’s had zero guests. His remaining four staffers kill time by grazing yak. Pemba-- who runs one hotel in Gorakshep, just below Everest Base Camp, and another in Pangboche--says that in his lifetime, he has never seen a disaster of this magnitude impacting his sector.

“Tourism is completely doomed,” he says. “In prior seasons, dogs would follow foreigners to feed off the chocolates, biscuits, and scraps they’d hand out. Now, even the dogs are starting to starve.”

A similar crisis is playing out in Pokhara, Chitwan, Upper Mustang, and the Annapurna region. Thamel—Kathmandu’s backpacker hub--is close to lifeless. No one is sure when exactly tourism in Thamel will return to normal. According to them, at least 75 percent of Nepal’s tourists are foreigners. Since European nations and the US have been hit the hardest by the Covid-19 pandemic, tourism operators have little hope their clients will be arriving from there anytime soon.

“Around 300,000 workers have been affected in Thamel alone,” says Dhruba Adhikari, general secretary at the Thamel Tourism Development Council. “We might not see tourists coming to Nepal for a couple of years. Thus, the government needs to create a policy that promotes schemes such as agritourism so that employees can begin working again.”

Nepal had set a target of earning $2 billion from tourism with the Visit Nepal Year 2020 campaign. The goal was to get at least two million tourists, who would spend on average USD 75 a day. But the campaign, which kicked off in January, never got rolling, owing to the emergence of the coronavirus in Wuhan, China. By mid-March almost all countries worldwide had started instituting travel bans.

Although tourism contributes only four percent to Nepal’s GDP, the sector provides jobs for people of all classes--from porters to pilots, from waiters to hotel owners. But airline companies have grounded their aircraft, and hotels and restaurants have remained closed since the start of the lockdown.

And it’s the part-time and informal workers associated with the tourism industry who have been hit the hardest. While the aviation sector, for example, employs around 2,000 formal employees, close to 8,000 informal employees work for companies associated with the sector. The Federation of Handicraft Association Nepal says that around one million people work directly or indirectly in businesses related to handicraft, while around 10,000 people work in rafting and affiliated businesses. Similarly, the Trekking Agencies Association of Nepal says that around 0.7 million people are directly and indirectly associated with the trekking industry, which is predominantly driven by foreign tourists.

As the virus continued to spread, Nepal was forced to cancel all mountaineering expeditions for the spring of 2020, including those to Mount Everest. The country lost millions of rupees in revenue. More importantly, thousands of mountain guides, porters, hotel entrepreneurs, and expedition organizers had no work. Expedition organizers, Sherpas, and porters worry that if the virus continues to spread, they might lose the opportunity to conduct expeditions and treks during this year’s autumn season too.

Using his profits from last spring as an indicator, Pemba says he lost Rs 10 million through the last week of March. “I had never imagined that I would face such a crisis in my lifetime,” he says. Hoteliers, Sherpas, and Khumbu locals say the situation wasn’t this dismal after 2014’s avalanche or after 2015’s devastating earthquakes. Guides and porters had never been left completely jobless for months on end. In the past, tourists were always quick to visit Nepal’s tourism destinations even after deadly natural disasters. And the people depending on tourism never felt this helpless.

An estimated 1,500 hotels and restaurants in the Everest region are teetering on the brink. Many hotel owners, staffers, porters, and trekking and climbing guides have returned home to farm. According to the Department of Tourism, the body responsible for managing mountaineering expeditions, 2,011 Sardars, 2,611 senior support climbers, and 5,616 support guides are registered with the department. They work three months in the spring and survive on those earnings throughout the year.

“It will be difficult to survive if I can’t get back to climbing,” says Lal Bahdur Jirel, who has already spent huge sums on his mother’s cancer treatments. “Corona prevented me from setting my loans.”

Concerned by the dwindling economy and by the frustration evident among tourism-based small and medium enterprises, tourism authorities have been pushing the government to allow businesses to reopen, with safety protocols implemented. They also want the government to promote internal tourism.

“We have been suggesting that the government study the Covid-19 spread, and reopen small businesses such as coffee shops and bakeries first. Allowing inter-district or inter-provincial treks would help entrepreneurs,” says Mira Acharya, director at the Department of Tourism. “We can reopen inter-district treks from mid-July, the date the government is considering for partially resuming domestic flights.”

The hundreds of thousands of Nepalis who’ve been impacted by the sector’s shutdown are hoping there will be some mechanism that will help them find jobs immediately, as it will take a long time for the tourism industry to bounce back.

Some are also expecting more focused, immediate recovery packages for climbers. “Climbing guides are the real drivers of tourism. Bringing in tourists in the absence of climbing and trekking guides is impossible. But the government has done nothing for them,” says Kami Rita Sherpa, who has summited Everest 24 times. “Hotels, airlines, and other businesses may reopen in a couple of months. But guides will have to wait at least until the next spring season to get back to work.”

Guides have also suggested that a special recovery package be provided for them so that they can cope with the crisis until they are back in business. A group of Sherpa climbers, including Kami Rita, have been pushing their umbrella body, the Nepal Mountaineering Association, and the government to begin mountain clean-up campaigns and drives to repair trekking trails, and to open the routes to several unclimbed peaks. These campaigns could employ guides, who would be able to earn some wages before tourism returns to normalcy. So far, the government has not taken up on their suggestions.

Kami Rita has already thought through the plans. “We can begin trail-maintenance work immediately,” he says. “The clean-up campaigns for mountains taller than 8,000 metres can be done only in the autumn season. They [the government] can assign us the work of fixing the climbing routes of unclimbed peaks. And we can explore new climbing destinations in Upper Mustang, Dolpo, and in the country’s far-western regions. No one has climbed Mount Cho Oyu from the Nepal side for a long time, owing to the lack of a route. We can definitely get involved in such work, which would also send out a positive message to the world’s climbing community.”

But entrepreneurs like him also think the government will need to respond to a changed market. Once the Covid-19 crisis dissipates, they feel, the government might have to reduce the usual number of climbing permits handed out, and waive visa fees for tourists.

“Otherwise, it will be difficult to revive the tourism economy, since the people in all nations are facing an economic crisis,” says Kami Rita.

The right to bodily autonomy

Abortion has been legal in Nepal since 2002 but there could be fallout from any overturning of Roe v Wade in the United States.