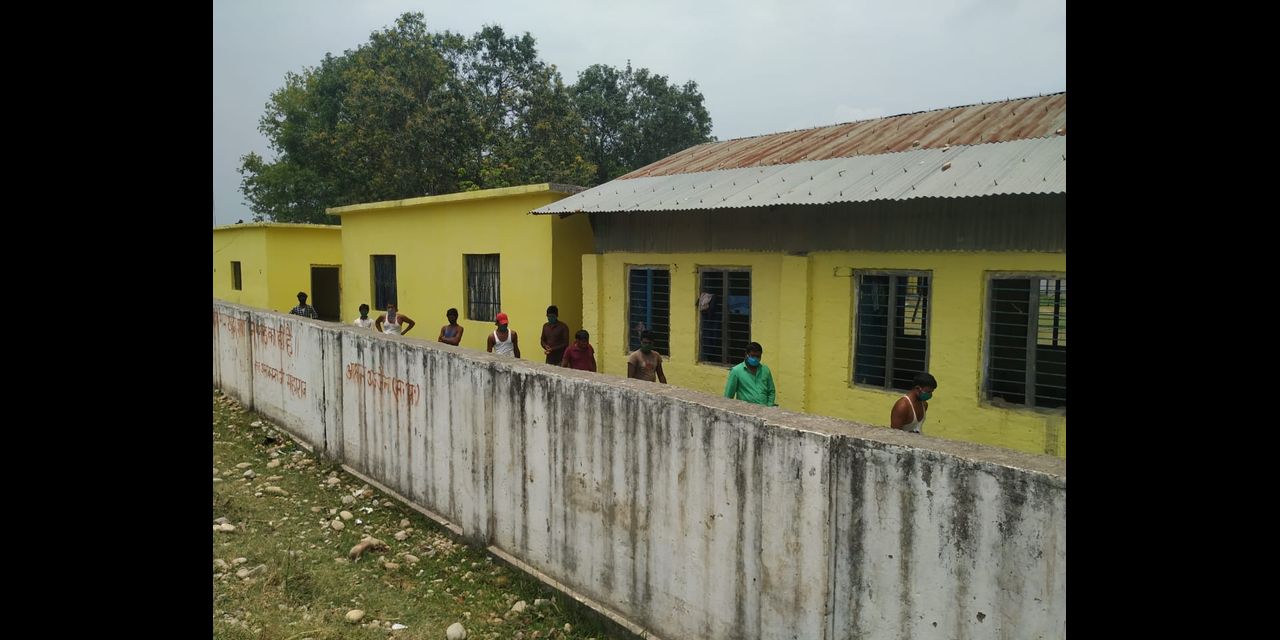 Thousands of migrant workers returning from India have been quarantined at transit points along the Nepal-India border and in Nepal’s many municipalities. However, the mass quarantine centres have not been able to maintain the minimum requirements that protocol demands.

“So much for maintaining social distancing. We spent our hard-earned money so that we could reach home safely, only to end up in crowded schoolrooms,” says Thapa, who works as a security guard in India.

When the trio reached their village, officials took them to a local school, Amar Secondary School, which had been converted into a quarantine facility. Four rooms in the school have been demarcated as quarantine rooms, where 23 people remained quarantined as of Saturday evening.

“More people are still being sent here. We don’t feel safe at all,” says Thapa. “No doctor has shown up till date, nor have we been tested, not even with RDT.”

Thapa’s house is just 200 metres away from the school. He can see his home, but he cannot go home. His family members started bringing him food after Khajura Rural Municipality stopped providing food, saying its budget was running out.

“For me, it would be safer if I was at home, rather than in this quarantine,” says Thapa, “People coming from Goa, Calcutta, Ahmedabad and other parts of India are quarantined here. The virus will spread if any of us  is infected ” 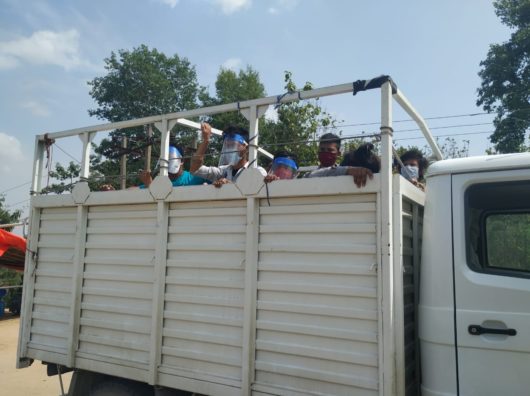 Migrant workers returning from Goa, India, being transported to a quarantine facility in Nepalgunj

Around  900 people are being quarantined in the municipality. The only difference between Amar Secondary School and others is that other local units have been able to provide food for quarantined people so far, although no one can say how long they continue the provision.

In Banke, overall, the people inside mass-quarantine centres live in constant fear of being infected at the centres. The fear spread after a sharp rise began to get reported in the number of confirmed cases. The chaos that erupted at Narainpur Rural Municipality, is a case in point. People started fleeing the quarantines after they tested positive.

There have also been some deaths at quarantines. On Saturday morning, a 35-year-old man died in a quarantine centre in Dailekh. He had come from Ahmedabad, India, 10 days ago.

On Sunday morning, a two-year-old boy who was in isolation in Bajura died. He had diarrhoea and suffered from respiratory complications. His swab-sample test results have not come back from analysis yet. On May 17, a 25-year-old India returnee man died while being quarantined in Narainpur. Of the six deaths that have been attributed to the coronavirus, three took place in mass-quarantine centres and isolation units.

Local authorities in Banke say that at least 3,000 people are returning per day from India.  The flow of people returning from India increased with the resumption of railway service in several parts of the neighbouring country. They are sent back home without being tested. Once they are in Nepal, these returnees are mostly being transported home on buses arranged for by the local units in the district of Rukum, Rolpa, Salya, Dailekh, and Jumla, among others. But in most cases, the people inside quarantines have to call their elected representatives, sometimes repeatedly, and ask that vehicles be sent to get them home. That means the returnees have to burn through the little that remains of the money they were carrying with them.

Owing to the problems with the overall management of the current quarantining model, people feel that quarantine centres are actually becoming hotbeds for spreading the virus. Experts suggest that in most localities, Nepal should opt for home quarantining, instead of sending all people, particularly returnee migrants, to mass quarantine centres.

“The home-quarantining and isolation model is a more practicable solution than the current chaotic management of quarantine centres and isolation wards,” says epidemiologist Lhamo Sherpa.

The number of people in quarantine will only continue to rise. Besides the thousands of India-returnees who are expected to pour across the border, hundreds of thousands from the Gulf and other countries, too, might be returning home in the near future. Nepal has neither the resources nor the facilities to deal with such huge numbers of returnees.

For the returnees, the lockdowns in India and Nepal have combined to make for a hellish journey home that doesn’t get better even when they reach their village. In many instances, villagers don’t allow corona-infected people in their village. “It all stems from misconceptions about the disease. Just because someone came through a quarantine centre does not necessarily mean they are infected. They don’t need to be shunned,” says Dr Sherpa.

Dr Sherpa says that to ensure the efficacy of the home-quarantining option, the local bodies must arrange for basic requirements. If possible,  they must be housed in separate rooms, and the house must be sanitary. “That said, many households do not have enough rooms to isolate returnees in separate rooms. And many villagers will need to be taught the importance of personal hygiene,” says Dr Sherpa.

“Home isolation does not require sophisticated clinical services,” says Dr Sushil Koirala. “You need to mainly monitor for fever, check for other signs and symptoms, and help the suspected cases get tested.”

During a media briefing on Saturday (May 30), the Nepal government said that some returnees would be allowed to isolate at home, instead of being consigned to mass-quarantine facilities. According to Dr Bikash Devkota, spokesperson at the Ministry of Health and population, many people who have returned from other countries have been home-quarantined, and that those who are in mass quarantines now will be allowed to go home after they are RDT tested.

The mass-quarantine model that Nepal has currently adopted is not working. With thousands of returnees needlessly suffering in Nepal’s many packed quarantine centres, it only makes sense that the country opt for home-quarantining.