As a writer just starting out in publishing, Tim Gurung encounters harsh criticism and petty jealousy but that only emboldens him to push further. 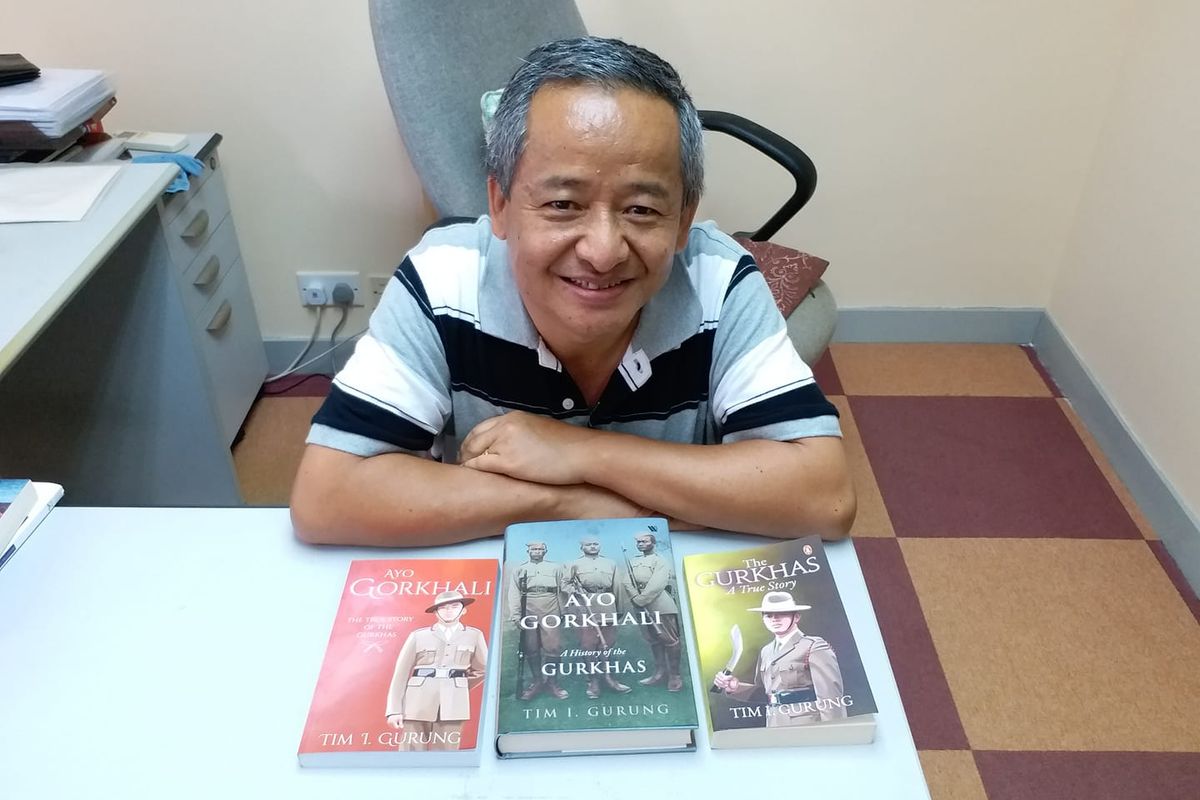 This is part 5 in a series by Tim Gurung about his life as a Gurkha soldier-turned-businessman-turned-writer. Previous entries in the series can be found here.

As I navigated the new literary world that I had found myself in, I encountered many interesting people and dealt with various helpful and memorable situations that took me a step closer to my goal of becoming a decent writer. It felt like a whole new community was out there, waiting to welcome me like an old friend.

As a small fish in a vast ocean, I searched for and joined small writing communities. Since mainstream media and official seminars were out of our reach, our only exposure was through social media. We joined every platform available and had friends from nearly all parts of the world. We communicated as if we had known each other for ages. Our daily routines were more or less the same, for we all had our books on Amazon, belonged to the same reading and writing groups on social media. All we did was talk, write, and promote our works through whatever way possible.

Our day always started with a peek at our author page on Amazon to see whether anyone had rated, reviewed, or bought our books. We also checked if the overall ranking of the books had gone up or down. We jumped with joy if we had sold a book or two and received a positive review. Those were days to cherish, and it still brings a smile to my lips whenever I rekindle those memories.

But whether in the real or virtual world, people behave similarly. After all, we are humans and we cannot hide our true colors for too long. Even worse, anonymity gives people a sense of false power and people tend to behave rather badly in the virtual world. Social media is a double-edged sword, and one has to wield it with caution. We meet sane, insane, and weird people on social media. One specific individual who stood out to me was a writer from the US who wouldn’t do a review exchange because I was from China. He said that I would pirate his work. I believe he had rated himself way too high.

Many incidents happened during those years and they were helpful yet forgettable. However, three incidents affected my views and changed my writing career. I recall them here, as I believe they helped make me a better writer, and I am grateful to them, even though it took some time before I realized their significance.

The first incident occurred in the early stages of my writing career. We had an American named John in our neighborhood and we used to say hi and hello whenever we met. He told us that he was a writer and I couldn't help but tell him that I too was planning to become a writer. After a few more conversations, we agreed to look over three chapters of my new book and go from there. After two weeks, he came to my office and gave me an earful about my writing. He must have said many things, but in a nutshell, he thought my writing was rubbish, a total waste of time, and I should be ashamed. He charged me almost 3,000 Hong Kong dollars for his time. I was shell-shocked and shattered, and it took me some time before I could recover from the resentment. Had I not been an old and experienced man, I would have stopped writing right there.

His rudeness and flagrant arrogance infuriated my wife, and rightly so. It took some years before I realized why he had reacted that way. Given the way Westerners are treated in Hong Kong, it made perfect sense. Westerners working in Asia are always treated with respect and get fat paychecks, often more than what they deserve. Hence, many developed a sense of superiority and inflated ego. It's all about ‘white prerogative’, and we cannot blame them for behaving this way, for it is we Asians who have put them on a pedestal. It was his ego talking and to protect his interests, he had to make me look bad and try to put me in my place. I had no reason to get angry with him or blame him for it, but I never wanted to deal with him again. After all, he was supposed to be my friend, and besides, he wasn't a famous writer either.

The second incident took place within our Nepali community in Hong Kong. After becoming a writer, I joined the social media circus and began connecting with our community in Hong Kong. I had already started publishing articles in local papers and our community seemed grateful for my progress. Since I worked in China and dealt with Western customers, my memory lapses on how our societies work were pretty understandable, and I offer no excuse for being too complacent. But expecting them to act otherwise turned out to be a grave mistake on my part. I was naïve and didn't even realize that appearing in a photo with certain people could be seen as a crime. We Nepali people might be living anywhere in the world – Hong Kong, New York, London, Vancouver, Sydney, Tokyo, Seoul, Singapore – but we never stop behaving like we are still in Nepal. I don't know whether to call that talent or a shortcoming.

Things started turning awkward for me when people started making noise against my writing. The same people who had praised me started criticizing my writing for no reason. One particular group of our so-called community leaders began posting negative comments on Facebook against me that puzzled me to the core. I didn't understand why they turned against me. I had no association with any political parties or groups of people, and I was writing about history as a neutral observer. I hadn't even adequately met those people, let alone offended them.

Things came to a boiling point, at least for me, when one of the gadflies made a scathing remark against me on his Facebook page, with all of his lackeys endorsing him in significant numbers. I wanted to meet the Hong Kong Nepali community and record their views for my Gurkha book. After all, they were all children of the Gurkhas. This particular individual accused me of being a ‘Gurkha hater’ and a failed writer; therefore, I wasn't qualified to advocate for the Gurkhas. This came from a man who hadn’t even spent a day in the army or published an article in a newspaper. I felt humiliated and livid and didn't mince my words while expressing my anger. But that didn't change anything and I tried to stay away from them.

The third incident happened to be a painful one. After working extremely hard in my new avatar as a writer, I finally made good progress and somehow achieved the unachievable. One of my new books became a bestseller on Amazon and I couldn't be happier. But something terrible happened. Some of the writers accused me of cheating and the entire writing community turned against me. Out of sheer jealousy and frustration, the writing community, which was supposed to consist of my friends and brothers-in-arms, ripped me apart, trashed my author page on Amazon, and turned my world upside down. My euphoria morphed into a nightmare, leaving me no choice but to abandon the damn community.

That day, I decided to stop self-publishing and left the bloody indie writing community. Luckily for me, I was working on my Gurkha book by then. For the next two years, I read more than two dozen Gurkha-related books and articles, watched numerous documentaries, spent a week at the Gurkha Museum in the UK, met with the Gorkhali community in Myanmar, attended Gurkha memorial service in Ipoh, Malaysia, visited the Kranji War Memorial in Singapore, and spoke with experts and veterans. Still not satisfied, I came to Nepal, took a team of four (me, a coordinator, a photographer, and a driver), and traveled all over Nepal for a month. We started from the east at Pashupatinagar and ended west at Chandini/Dhodhara. We met over a hundred Gurkha veterans who had fought in World War 2, the India-Pakistan war, in Malaysia and Borneo, and in Kashmir and Sri Lanka. It would take me three-and-a-half years to complete the Gurkha book, find an agent, and bring it to readers via four different publishers worldwide.

Since success is the best way to silence your critics, I worked extremely hard for the next few years. I wanted to prove them wrong, at least initially. When success finally dawned on me, I realized that I had been thinking the wrong way all along. I had nothing to prove to anyone, for they were only circumstantial incidents that helped change me for good. And instead of being angry at them, I should be, in fact, thankful to them. Had they not pushed me to the edge, I wouldn't have changed and worked so hard, and success wouldn't have come to me by itself. Therefore, I am grateful to them, each of them, and would like to express my gratitude to them all – thank you!

In the next part of this series, I will write about the international success of my Gurkha book and why this book matters to all Gurkhas and the Nepali community at large.

Tim I Gurung  TIM I GURUNG is a novelist, an ex-Gurkha, author of Ayo Gorkhali, an acclaimed book about the Gurkhas. He lives in Hong Kong.

Sahina Shrestha: ‘I like exploring different forms of storytelling’

This week on Writing Journeys, the digital editor of Nepali Times reflects on starting out writing and in journalism, and provides insight on how to tell stories through video.

Dipak Gyawali: ‘The hours moved like lazy cattle across a landscape’

This week on Writing Journeys, engineer and political economist Dipak Gyawali pays tribute to the teachers who taught him to write precisely and meticulously.

Do you know the verbs that experienced writers know and use routinely?

From soldier to businessman

In his article, Tim Gurung recollects his experiences moving to Hong Kong in the 90s and transitioning to a new life in business.

Sanjib Chaudhary, a writer, blogger, and translator, takes us on a journey from writing advertising copy to writing articles and fiction for a global audience.

Manjushree Thapa: ‘It never gets easier, but I love writing’

In this edition of Writing Journeys, novelist and translator Manjushree Thapa illustrates her difficulty in getting from draft to draft and her complicated relationship with writing.