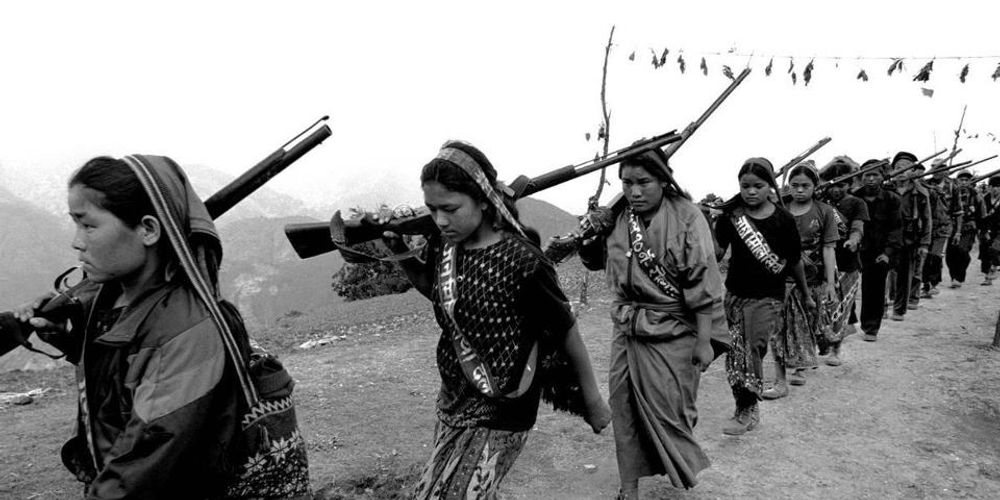 Sam Cowan first encountered Nepalis in the mid-1960s, when he served with British Army Gurkhas in Malaya and Borneo. He visited Nepal for the first time in 1966, when he went on a six-week trek. His engagement with the country deepened as he rose through the ranks in the British Army. At the time of his retirement in 2002, Cowan was a four star general and Chief of Defense Logistics for the British armed forces, as well as Colonel Commandant of the Brigade of Gurkhas (the titular head of British Gurkhas). After his retirement Cowan continued to trek across the Himalayas and has maintained a sustained intellectual commitment to the land and its people. He has now published a book: Essays on Nepal: Past and Present. Readers will discover that he has been a perceptive and deeply invested eyewitness to the country over the past half-century. 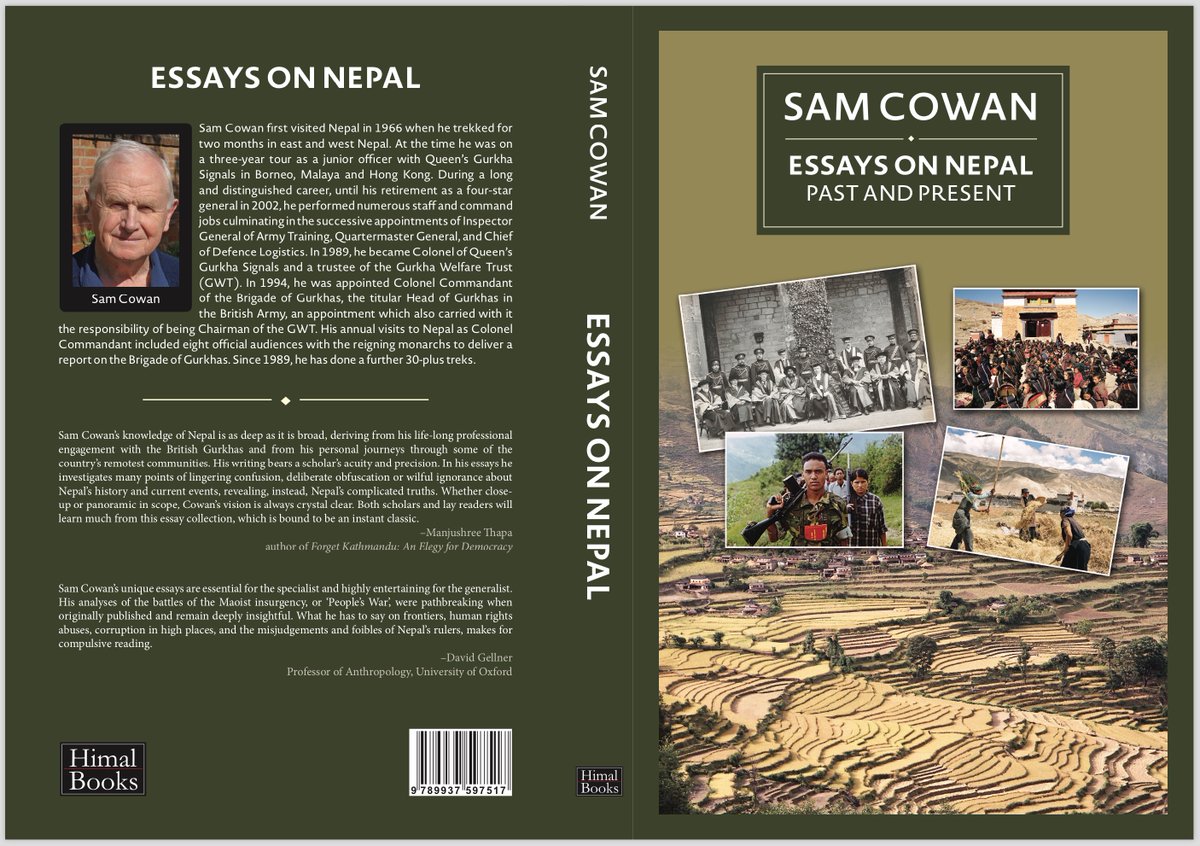 All of the essays collected in this volume were written after Cowan retired from service. They reveal his profound concern with the nature of political and military power in Nepal – how it operates, who benefits from it and who suffers. The essays cover a wide range of themes. Yet each is grounded in a crucial historical fact – Nepal originated as a military state based on land revenue extraction from a subjugated population. As Cowan demonstrates, this legacy continues to hamper Nepal’s development despite the democratic movements of the past century and the abolition of the monarchy.

Cowan explores his subject with tenacity, seeking out sources that seem almost inaccessible and burrowing into painstakingly minute details. (The final chapter in this volume provides an account of his year-and-a-half-long struggle to retrieve certain documents concerning the Khampa rebellion from the British Foreign Office files). As a result, this book offers not just fresh interpretations but also original contributions to Nepali history.

The accounts of his treks reveal more than just his fascination with the landscape. The reader will come across surprising nuggets of local history and illuminating reflections on life in the Himalayas. For instance, the essay titled Crossing the Larkya La taught me something entirely new about Samdo, a village in the upper reaches of Gorkha district, which I once travelled through. The village, Cowan tells us, was established by migrants from Tibet who moved to Nepal “lock, stock and barrel” in the 1960s. They were granted Nepali citizenship partly because they possessed engraved plates, given to their ancestors by the 14th century kings of Jumla, which allowed them grazing rights in what is now Nepali territory. Another essay on Dolpo explores the transformations that have occurred in the region as a result of the availability of cheap consumer goods from China and the increasing importance of yarsagumba as a source of income for the locals.

The first half of this volume also deals with the Maoist war. These essays are quite simply the most incisive and illuminating pieces of writing available on the military dimension of the conflict. With his wealth of military experience and knowledge, Cowan was among the first to recognize the critical weaknesses of the Royal Nepal Army (RNA). His 2006 essay Nepal’s Two Wars remains essential reading for anyone interested in the topic. Cowan argues that the RNA’s sole focus on destroying the Maoist party organization was misguided and doomed to failure, especially as it made no corresponding efforts to win people’s support and prevent the rebels from expanding their alliances.

The 2010 essay Inside the People’s Liberation Army: A Military Perspective explores the organization, strategy and psychology of the Maoist army. The piece offers a detailed analysis of three battles fought in the latter years of the conflict. Before this essay was published, few writers on Nepali politics had any real conception of how Maoist leaders planned attacks with a view towards achieving concrete political outcomes or how they rethought their strategy following military setbacks. Cowan made a seminal contribution by demonstrating the interrelationship between military and political developments. Particularly notable is his account of the battle of Khara. We learn that the failure of the PLA’s 2005 attack at Khara directly led to Baburam Bhattarai’s rehabilitation, following which the Maoists sought an agreement with Nepal’s mainstream political parties. Cowan thus sheds significant light on a crucial but obscure period of the history of the Maoist party.

Read some of Cowan's essays featured in the book here:

In later chapters, Cowan delves deeper into Nepal’s past, excavating documents from British Foreign Office files in the British Library in London and National Archives in Kew. The events that he uncovers lie at the fringes of the main currents of Nepali history. He recounts how Khampa rebels based in Nepal ambushed Chinese army trucks in Tibet in 1964; how the Chinese carried out a military incursion into Nepal in 1960, leaving one Nepali policeman dead; and how they treated Indian Army Gorkha soldiers captured during the 1962 Sino-Indian war. Cowan provides an extended analysis of how India came to occupy Kalapani, and how Indian checkpoints were established at 18 locations along Nepal’s northern border between 1952 and 1969. Two long essays describe Prime Minister Chandra Shamsher’s visit to the UK in 1908 and King Mahendra’s in 1960.

These chapters are bound to delight any reader interested in Nepal’s modern history. Rather than treating these events as mere curiosities, Cowan uses them to illuminate the broader historical setting in which they occur. The account of Chandra Shamsher’s visit to the UK reveals Nepal’s position vis-a-vis the British Raj in the twentieth century. We see the extent to which Chandra ingratiated himself with the British to receive honors, including an honorary Doctorate of Law from the University of Oxford, and security guarantees.  Mahendra on the other hand, failed to receive equivalent honors from the British and harbored some resentment towards the Ranas but recognised that he needed their support to accomplish his goals. Cowan also dissects the king’s ambition to gain a dominant position in Nepali politics. The shadow of the 1960 coup, which Mahendra carried out soon after returning from the UK, looms large. Cowan draws parallels between the 1960 coup and King Gyanendra’s coup of 2005, and discusses how they retarded Nepal’s democratic development.

A number of essays describe events from the 1950s and early 1960s and collectively shed light on the politics and personalities from this period. The themes that Cowan has chosen are likely to excite Nepali nationalists obsessed with the country’s sovereignty and relations with India and China. They will find much of interest in this book, though they might be disappointed to see some of their key assumptions being dismantled. For example, Nepali nationalists have in recent years sought to establish that autocratic monarchs were better than democratically elected leaders at promoting Nepal’s national interest. Contrary to their claim, Cowan shows how judiciously the Nepali Congress leader B.P. Koirala responded to the shooting of a Nepali policeman by the Chinese army in 1960. Koirala took a firm position on Nepal’s behalf while also avoiding antagonizing the Chinese government. In contrast, King Mahendra deliberately ignored India’s occupation of Kalapani to gain Delhi’s support for his rule.

Other essays in the volume revolve around contemporary events. Cowan examines the role of the military in national politics and the government’s continued inability to bring it under civilian supremacy. A long piece on the All Nepal Football Association (ANFA) meticulously exposes the corruption of ANFA’s longtime president Ganesh Thapa and his deep ties with powerful figures in international football and Nepal’s political elite. Cowan voices the outrage that many Nepalis feel at the abuse of power by the state elite. Those seeking a more just and inclusive Nepal will find a firm ally in the author of these essays.