In two separate incidents in recent times, frontline workers have been assaulted and beaten up by relatives of patients. 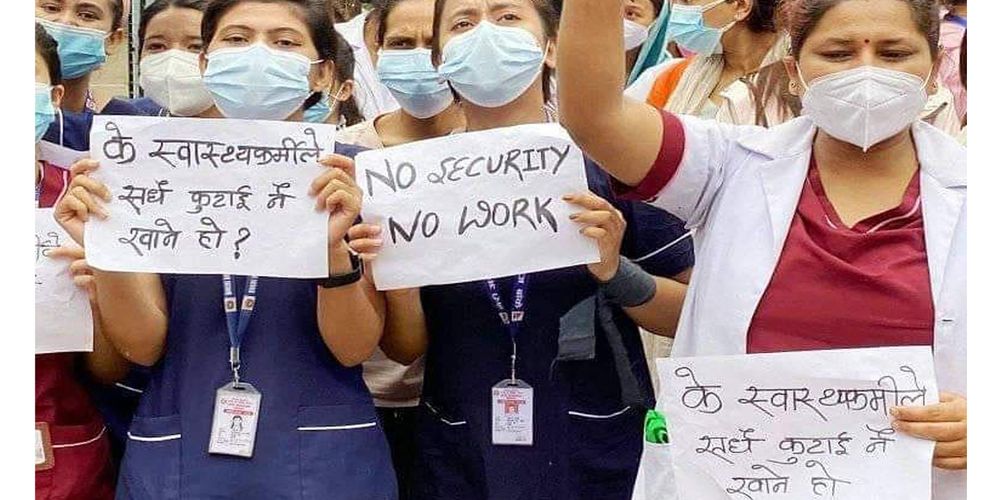 Ten days ago, when Dilli Bahadur Rawatwas admitted to Bheri Hospital, in Nepalgunj, he was already in a critical condition. He had tested positive for Covid-19 and his oxygen level was dangerously low. He was placed on a ventilator and hospital staff said that they had done everything they could to save Rawat’s life. But Rawat’s family was not convinced the hospital was doing enough.

“If anything happens to my brother, I will beat up each and every one of you in this hospital,” Rawat’s brother told healthcare workers at the Covid critical care department of the hospital multiple times, said Dr Chandra Prakash Sahu.

On the night of May 28, 52-year-old Rawat died. Upon hearing the news, Rawat’s family attacked Dr Sahu and two other on-duty nurses — Asmini Gurung and Sadiksha Gaire, alleging that Rawat had died due to the hospital’s negligence. One of the nurses was grabbed by the neck and choked. The relatives also vandalised the hospital’s Covid critical care unit.

The situation was finally brought under control with the help of the Nepal Police, who had been notified of the incident by the hospital administration.

As the country’s hospitals struggle with an overwhelming number of Covid-19 cases and casualties daily, such incidents of frontline healthcare workers having to face the brunt of the ire of families are increasing.

On May 18, a similar incident had occurred at the Birat Medical College in Biratnagar. Nirdosh Basnet, a health assistant, and a guard were beaten up by the relatives of an elderly patient who was admitted at the hospital with a case of hyperglycemia.

According to Basnet, after injecting insulin, the patient was stable and was directed to be discharged from the hospital. The guard had then asked the patient’s seven relatives — who had all gathered in the emergency room — to leave because they were making a crowd, but two of them started to pick a fight with the guard, eventually beating him. When Basnet, 22, tried to stop the fight, he too was beaten up.

“We have been working for the service of others 24/7, putting our family aside and this is how we are rewarded?” said Basnet. “I have been traumatized ever since that incident and have not talked to anyone as much as I used to do. We are humans too, is this what we deserve for working relentlessly?”

The two perpetrators were released on bail after being held in custody for a day.

Such incidents of verbal and physical violence directed towards hospital staff are not new, say healthcare workers. But since the pandemic began, the threat of physical and psychological violence towards them has significantly increased, they say.

“I have worked in the medical profession for over 17 years now, and have seen a lot of cases where healthcare workers are often mistreated. I think such incidents are reflections of the society we live in,” said Dr Rupesh Chaudhary, who works at Birat Medical Hospital.

And despite the threat frontline health care workers are facing, both the federal government and local authorities have done little to control the violence against them.

“If necessary actions are not taken properly by the authorities, such incidents will continue to happen. The government needs to step in and the public needs to understand that no one would want their patients to die. I think if both the steps are taken simultaneously, cases of abuse against the healthcare workers might decrease,” said Dr Sudip Yadav, who was an on-duty doctor when the incident took place in Biratnagar.

Because of what happened last night, staffers at the Bheri Hospital have taken matters into their own hands and started a protest at the hospital’s premises, demanding that immediate and serious actions be taken against the Rawat family.

The protesters are demanding security for healthcare workers at the hospital.

Even though police personnel were present at the incident, only three of the four people were arrested.

“I heard the other perpetrator is related to Chief Minister, Shankar Pokhrel, that’s why he wasn’t arrested,” Sadiksha Gaire, one of the nurses attacked, told nepalsamaya.com.

President Bidya Devi Bhandari has since tweeted support for the medical personnel and three of the assailants — Lumbini provincial assembly member Man Bahadur Rawat, Bharat Rawat, and Lokraj Rawat — have been booked for attempted murder.