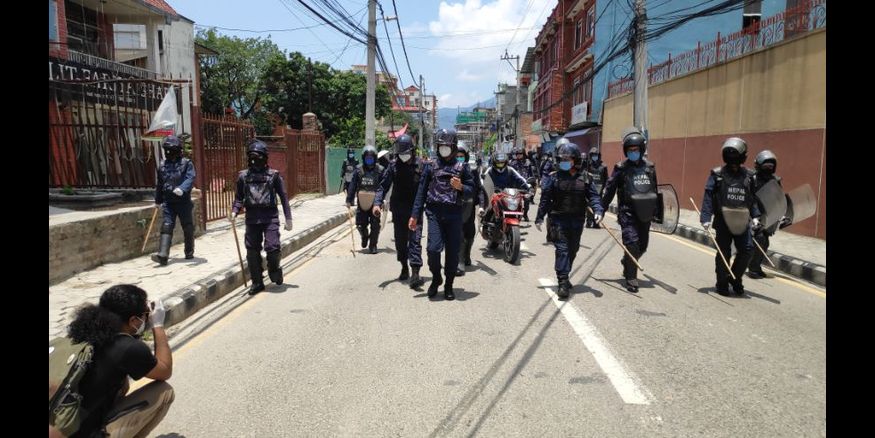 On Tuesday, in a naked display of abuse of power by the Oli government, police cracked down on scores of peaceful demonstrators who had taken to the streets of the Capital to protest against the government's mishandling of the Covid-19 pandemic.  Around 200 protesters, mainly youths from diverse backgrounds, were demanding more tests, better care, and more transparency around the government’s Covid-19 response when police showered them with lathis and hosed them with water cannons. Ten people were arrested in the crackdown, and several were injured.

“The protesters had neither stepped an inch toward the restricted area nor engaged in any kind of verbal or physical violence when the police suddenly asked us to stop the protest at 11.30,” read a statement released by the representatives of the protesting youths. “When we politely denied, the police brought forth the water cannon vehicle to disperse the crowd and mercilessly baton charged the protesters.” The representatives have also demanded the unconditional release of those arrested, without charges.

SSP Shyam Lal Gyawali of the Metropolitan Police Range said that the police had to use force because the protesters were defying the lockdown and increasing the health risk to society.

“They weren't arrested for protesting, but for defying the lockdown. There is no restriction on protests, but everyone must understand that the lockdown is meant to stop the spread of Covid-19 ,” Gayawali told The Record. He said that the protesters would be released after due process.

The majority of protesters were youths protesting the government’s mishandling of the Covid-19 crisis. Their main demands include an immediate stop to the RDT tests, increase of PCR testing, increased medical capacity, increase in ventilators, more consideration for frontline-worker safety, safe passage and management of returnee migrant workers, better quarantine mechanisms and facilities, and transparency on how the government is dealing with the crisis. At the protest site, in Baluwatar, were also some businessmen who were demanding an end to the lockdown, while a few others were demanding the scrapping of the proposed Millennium Challenge Challenge Corporation compact (MCC) with the United States. The MCC is a multi-million dollar grant scheme through which the United States is to invest USD 500 million in infrastructure projects. A section of Nepali leaders from across the political spectrum have opposed it, describing it as a component of the US’s Indo Pacific Strategy, which provides strategic counterbalance to China’s increasing geopolitical power and ambitions.

Tuesday’s protest, though relatively small, is being seen as yet another wakeup call for Prime Minister Oli, who has failed miserably in guiding the country through the pandemic and one of the biggest crises in the country’s history. Just this week, several cities in the Terai have seen citizens starting to defy government orders, and in Kathmandu, too, shopkeepers have begun to roll up their shutters.

Oli has neither been able to increase the number of tests being conducted nor ensure basic decent accomodation in the community quarantines. It has also failed to respond to the pleas of migrants stranded in various work destinations. Nepal has confirmed around 4,085 cases of Covid-19, while 15 deaths have been attributed to the virus. As of Tuesday evening, 10,6331 Nepalis had been tested.

The goal is to get your attention, then show you advertisements.

Why victims of Nepal's civil war may not get justice