Anagha Neelakantan: ‘Write because it makes you think or feel’

Anagha Neelakantan: ‘Write because it makes you think or feel’

This week on Writing Journeys, editor and analyst Anagha Neelakantan draws on her writing experiences and realizations to offer sage advice. 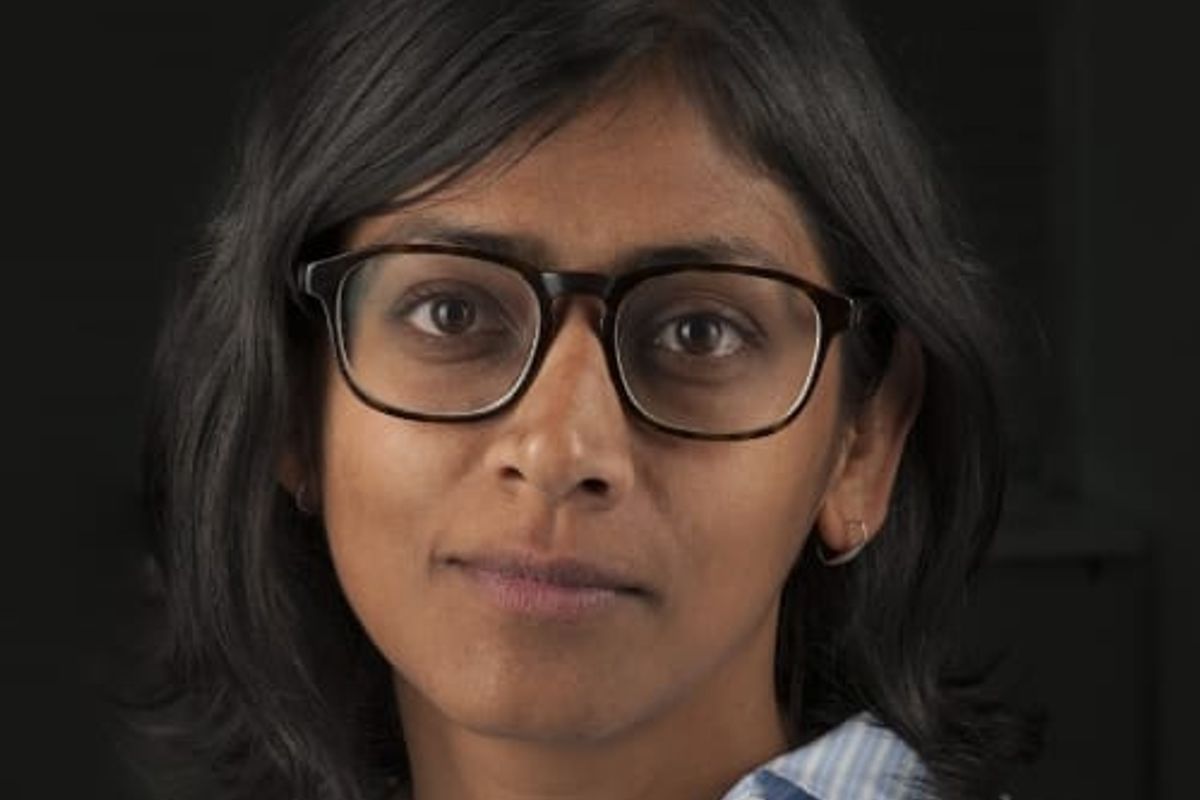 This week’s Writing Journey comes from Anagha Neelakantan, who grew up in India, studied in the US, and has worked in Nepal as an editor at Nepali Times and as a human rights researcher and advocate.

Anagha recounts wonderful stories of growing up in a family that “liked reading more than we liked anything else” and offers many useful ideas and pointers gained from years of helping writers describe and analyze the world around them.

She pulls few punches in criticizing her early schools, even so-called ‘elite’ institutions: “I can’t remember being taught how to write. From school, I got nothing.”

Her schools emphasized English grammar and vocab, not writing. Learning to write clearly and effectively came only while attending a US university. At first, studying at a top-rated university came as an “enormous shock.” She “had never really learned to study, to read critically, to write, or to manage feedback and criticism.”

Anagha shares some of the joys and headaches that editors face. As an editor, she likes helping writers “clarify their own thinking and discover the most effective version of their own voice.” Less fun is working with writers who forget that nothing is perfect and that frank feedback could improve their writing. She applauds Kunda Dixit’s advice that “that pretty much anything can be cut by half.”

Anagha’s interview is not only interesting but also packed with pointers, big and small, about how to “to cull nonsense [and] see a narrative arc.” Some of my favorites: making mind maps, printing out and cutting up an article to make rearranging paragraphs easier, looking “past the obvious,” reading out loud, and using timers to encourage taking breaks and moving around. She offers many other terrific tips and reflections.

It was a real pleasure sharing ideas with Anagha this week. I always love “talking shop” — discussing the nuts and bolts of creating good writing. Here’s to the power of words! Thanks Anagha!

Writing Journeys appears every Wednesday on The Record. Recent contributors have included Dev Datta Joshi, Chaitanya Mishra, Sarita Pariyar, among a host of others. All of the previous essays and interviews can be found here.

Where did you grow up? Who got you interested in stories?

I am first a reader. All my work and interests derive from reading. So I was lucky that in my family we all liked reading more than we liked anything else.

Libraries were vital spaces for me, in particular small community libraries. As an eight-year-old in 1980s India moving from a Himachal Pradesh village to Delhi’s moral and physical filth and clamor, the best gift I got was a one-room library attached to a neighborhood temple.

The overwhelming incense, the nonstop bells, the fiendish grandmothers (I was eight), and the vicious children — none of these things stopped me from visiting a few evenings a week to check out mysteries, classics, comic books, folktales, and even the odd joke book (knowing my sisters would shame me for it). This gave me enormous comfort. Reading gave me new words for my experiences and parallel worlds to inhabit, and people to befriend when real life became unfamiliar or difficult.

The AWON library in Kathmandu was a similar haven for me in the early 2000s: with access to its lovely hodge-podge collection, I was rarely entirely lonely.

Who taught you to write and how?

I can’t remember being taught how to write. From school, I got nothing. In fact, worse than nothing. The ‘good’ schools I attended were not good for learning. If you could write with correct grammar and a decent vocabulary, you were said to ‘write well’. A more accurate assessment would have been that my English was good.

To go from having ‘good English’ to becoming an acceptable writer, I had to go to university abroad.

You studied undergraduate at Princeton in New Jersey, USA. Was that an adjustment, academically?

It was an enormous shock because I had never really learned to study, to read critically, to write, or to manage feedback and criticism. I knew I was not a very good writer, which made me feel ashamed and inferior. But I also knew that a lot of my classes were about theory and argument. So I compensated for indifferent writing with sharp arguments that tore down texts, often cruelly. That may be an effective, if crude, approach at university, but it must evolve alongside one’s sensitivity to the world and to readers.

Do you remember any moments your writing jumped up a notch?

In 2000, Kunda Dixit hired me as a desk editor for the new Nepali Times. I learnt so much from Kunda: that being engaging is more important than showing off; that jargon is unforgivable; that pretty much anything can be cut by half; and that a poorly structured piece can point to a failure of reporting/research or logic. I also learnt to read in Nepali, for which I am so grateful.

Teaching A-Level English Literature at Rato Bangala, I had to be able to explain what made a particular way of writing or analysis effective.

At International Crisis Group, each role I occupied helped me develop as a writer and editor. As an analyst producing public reports, I learnt the pleasure of working collaboratively and the productive pain of being rigorously edited. I developed tools to work with huge amounts of information: to digest it, to recognize patterns, to ask better questions, and to structure research-based, detail-filled analytical pieces.

As a director of field research and analysis, I got insight into how colleagues wrestled with big subjects. Reading and editing many, many drafts refined my nose for effective narrative, argument, and structure. I also developed an instinct for recognizing cherry-picked arguments and false notes of sentiment or rhetoric.

You have done a lot of work as an editor, at the Nepali Times and elsewhere. What common bad habits hold back inexperienced authors?

I take no joy in cutting other people’s hard-won words. As an editor, my job is to help writers clarify their thinking and discover the most effective version of their voice. People write for all sorts of reasons, and an editor should respect that.

Here are some realizations:

Do you agree with common maxims beginner writers often come across, like ‘write what you know’?

You have to understand the standard advice in your own way. Take ‘write what you know’, for example. Yes, but how and why do you know what you know? Why do you know this and not something else? Is it the same as what others know? These questions help you understand your position in the world and what it is that you ‘know’.

Or ‘find your voice’. Whether you are writing a researched piece, an opinion piece, fiction or anything else, you have to know who is speaking. This doesn’t mean finding the most authentic you (not possible) or articulating your deepest thoughts. Rather, you have to remember that conveying thoughts, observations, and feelings into written words is not just transcribing what is in your head. It is choosing and ordering to create something, whether an image, a self-presentation, an argument, or a sensation. These choices are not automatic, but driven by our inclinations and biases. The part of your ‘self’ doing the choosing and ordering is an important element of your voice.

The reward can be in the misery. I am rarely thrilled while writing: it can be difficult, tedious, frustrating, and soul-destroying. But eventually the process gives you the gifts of discovery and intense absorption. Very little compares to working through a difficult piece and feeling your sense of time, self, meaning, and place shift.

All writers have little tricks that help them? What are some of yours?

I sometimes draw ‘mind maps’ to help identify the most significant elements of a piece of writing. A brain dump can be a great help. Start writing an email to a friend with all your lousy, jumbled, half-baked thoughts. Invariably, this helps to cull nonsense or see a narrative arc.

Radically cutting and moving sections around can help you see alternative structures for a longer or complex piece. Sometimes I print a text out and cut it up and move it around that way.

I love how good writers use Twitter threads. Doing that privately can be a great exercise in forcing concision and clarifying connections. Reading words aloud can help identify especially ridiculous bits.

Whose writing have you read recently that you really admired?

The work of Ed Yong in The Atlantic is exemplary. His writing about the Covid pandemic does not keep the language simple, as we are told to do while tackling complex subjects. Yet his precision of vocabulary, detail, and structure, of argument and rhetoric give his work a diamantine clarity.

I love to read anything by Shradha Ghale and Sarita Pariyar. They take me into realities I too often think of in the abstract. In different and important ways, each reminds us not to be snobs, to strive to understand where our perspective comes from. There is nothing inherent about being a good writer, just like there is nothing magical about having good English. No knowledge, no skill is separate from its context. Why did I have ‘good English’ or become a writer? Because an accident of birth gave me parents who loved to read, and unfathomable generational privilege from my caste, which dovetailed with my own inclinations for reading and writing. As a result, I had so much space, advantage and social capital, I probably still cannot clearly assess myself and my abilities. So my interpretation of the world cannot be more valuable than anyone else’s. This applies to many of us. Ghale and Pariyar demonstrate the necessity of questioning our understanding and the value of examining different kinds of experience and knowledge.

Any last thoughts or stories for us?

On joining a reputable school in Delhi, my sister and I, in the twelfth and fourth grade respectively, were handed slim booklets, A7 size, floppily stapled together and topped with a bile green cover that matched the title: “The Ideal Child”.

Inside unspooled paragraph after paragraph of priggish drivel that plunged me, a happy child, into misery. My sister was very smart. She added a subtitle to the cover:

The relief I felt on seeing that, in contrast to the depression that had gripped me when I read the booklet, awoke me to the power of words.