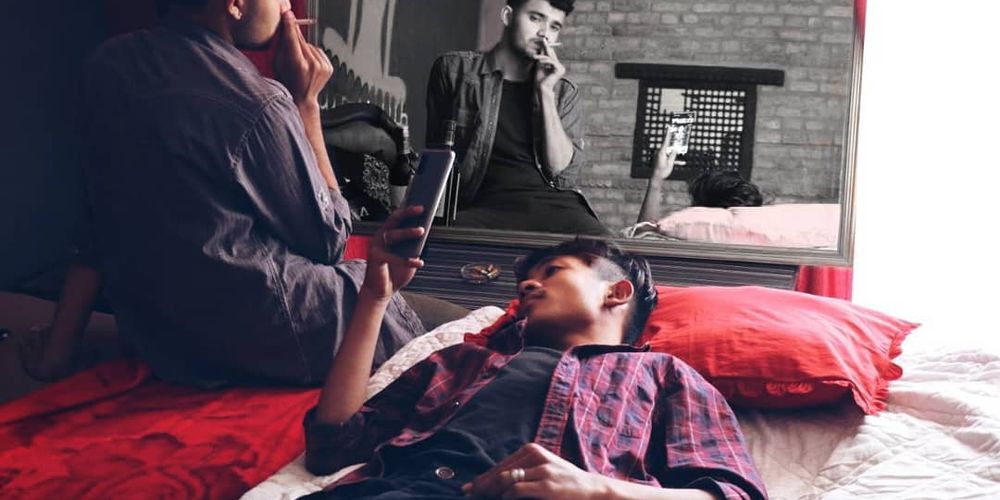 The arts are the perfect medium to open up space for conversation. Historically, art has been used as a tool of dissent against predominant narratives and has helped break down barriers and introduce new perceptions.

Kaalo.101, an art space based in Patan, is doing just that. To highlight and celebrate the queer community and the broader LGBTIQ movement in Nepal, the Kaalo.101 team is curating an online exhibition for the entirety of June to commemorate Pride Month.

Piecing together suppression and celebration, moments from private lives and public protests, the exhibition, titled Queer — A celebration of art and activism, puts together stories of identity, sexuality, desire, love, and struggle. It traces queer lives — their creativity and identities — across Nepal and around the world in an effort to place the spotlight on queerness.

Such a coming together of art and gender identity is significant, considering the queer art scene — even the queer movement — in Nepal is still young.

“Only recently, around five-six years ago, artists in Nepal started to make art about their sexual identity,” said Helena Aryal, co-founder of Kaalo.101. “This is because there really hasn’t been a safe place for queer people to explore themselves through art.”

And as such, it is evident that queer art is being shaped largely by a desire to be heard, to be able to create their own queer identities, because the identities that are dominant in Nepali society are largely inadequate.

“By embracing our identities as a position from which we can create self-empowered narratives, we want to resist dominant understandings of gender and sexuality,” said Ankit Khadgi, a journalist who is a part of the project.

The artworks — which are currently being put up on Kaalo.101’s Instagram and Facebook pages — reflect that very sentiment via a range of artforms, such as analog photography, visual storytelling, spoken word poetry, animation, and comic-book illustration, among others.

From the 78 submissions the organizing team received, around 40-45 are works of Nepali artists. A majority of the rest are submissions by Asian artists from Pakistan, Malaysia, Indonesia, and Bangladesh.

Besides the ongoing exhibition, the team has also put together an archive, titled We are queer: The archive project, which is a thorough documentation of Nepal’s queer movement that captures its struggles and injustices as well as celebrates its wins. From happy pictures of pride parades and successes of queer individuals like Anjali Lama, the archive also includes heartbreaking pictures of violence inflicted on members of the queer community.

With over 300 pictures, the project has tried to encapsulate the queer movement and its resilience from 2003-2021. What's also refreshing is that the collection is not limited to Kathmandu's urban voice, and gives space to events that have taken place in other cities too, like Chitwan and Pokhara.

Another refreshing — and compelling — aspect of the archive and exhibition is that all the pictures, which have been submitted by members of the queer community and by photographers and activists, are unfiltered and raw. This ridding itself of the ‘whitecube-ness’ of exhibitions, wherein only the most commercially-viable and aesthetic artworks are exhibited, makes the connection between the art and the public more authentic and real.

“Art is a channel to communicate. It opens up the space to have a conversation around gender identities and that is why we wanted to keep it as real as possible, to empower the voices as they are,” said Aryal.

To make art accessible and to reach out to and engage with as many people as possible, the team is also placing the artworks in Patan, from Newa Chhen to Sankhamul. The details of where the artworks are physically accessible is available on Kaalo's Instagram page.

The archive also commemorates queer individuals who have made a mark for themselves in Nepali society, from Manisha Dhakal, executive director of Blue Diamond Society, the country’s oldest queer organisation, to Rukshana Kapali, a queer activist, and Bhumika Shrestha, the first Nepali to receive official documents under the ‘other’ gender identity.

“Our efforts are a means to show solidarity and acknowledge the work done by queer people against all odds. It is an effort to encourage queer people to take charge of their own narratives,” said Khadgi.

Almost a curation of queer heritage, the archive and the ongoing exhibition is powerful. It is also a vital documentation, one that can perhaps be used to imagine a different future for the queer community in Nepal.

“This space that we have created to put together art and activism is very inspiring, as this intersection makes art and information more accessible and pushes people to join in the conversation,” said Nirvana Bhandary, a feminist writer who is also a part of the project.

After the month-long curation comes to an end in June, all the pictures that are part of the online exhibition will be placed on Kaalo.101’s website.