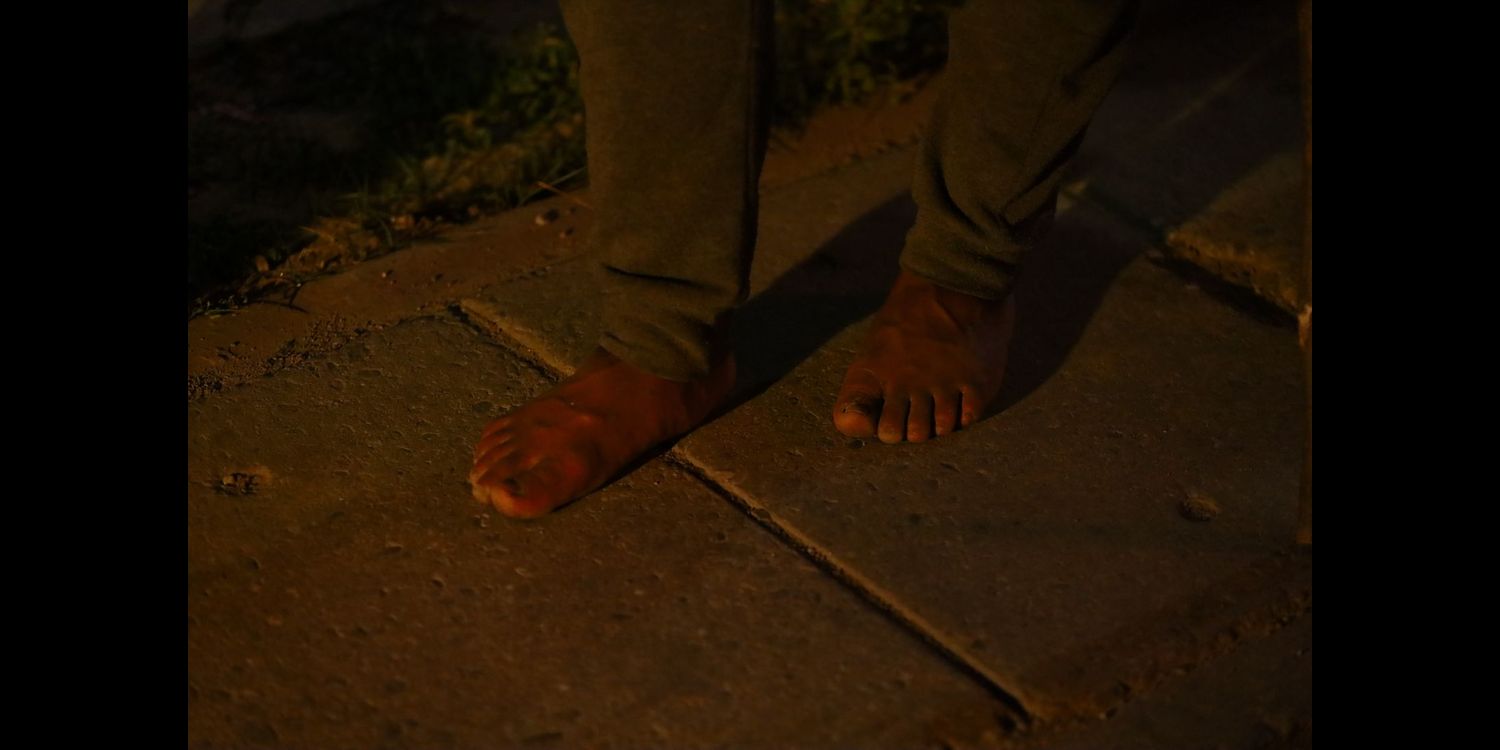 Over 2 million people reportedly left the Kathmandu Valley before the 24 March lockdown stirred the entire nation shut. Hundreds continue to flock out everyday, fleeing not just from the virus, but from the joblessness, hunger and desperation that has come to plague their lives amid a prolonged Covid19 lockdown.

Daily wage workers stripped of livelihood, students without reason or money to remain in Kathmandu anymore, stranded travellers are all finding themselves taking pedestrian journeys, some of up to 20 days, before they reach home.

The scope of the crisis has been staggering, shaking people out of their already precarious urban existence and hurling them back into the nooks and crannies of Nepal’s rural hinterland - from anywhere between Solukhumbu to Salyan - that they had initially arrived from in a pre-corona era. The promises of a better future that Kathmandu had lured them with have vanished, hopes and aspirations have been dashed abruptly. In evident haste, they have packed what little fits inside backpacks - for those who can afford them - and sacks and polyethene for those who can’t. Many are in chappals, and some even barefooted.

While an unremorseful government has flipped back and forth on its decision to allow buses to take people back home, ultimately rejecting it, the people themselves have shown unwavering deliberation in their slow walk toward their villages. It beggars the imagination to ask what image of home, what notion of a better alternative than their future in locked-down Kathmandu, keeps them going. 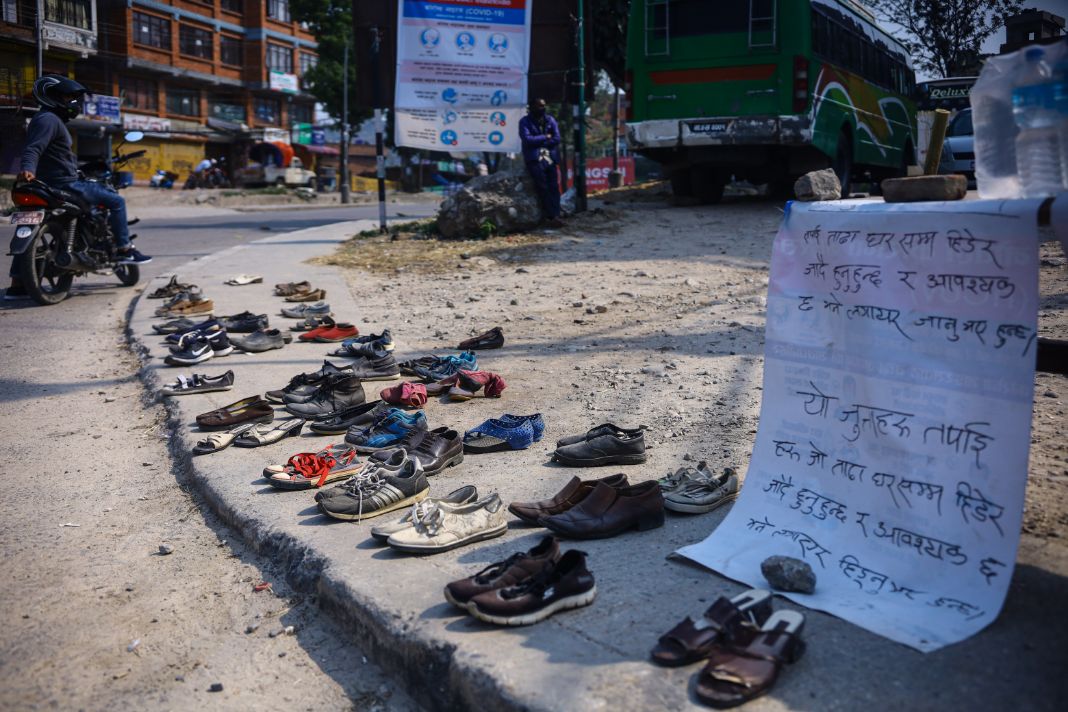 In a scene that sums up the insurmountable tragedy of the situation, youth from Dhulikhel make an offering of second-hand shoes at the Araniko Highway junction to people traveling on foot. “If you are walking a long way back home and are in need of shoes, please wear them,” a hand-made poster next to the line of shoes says. 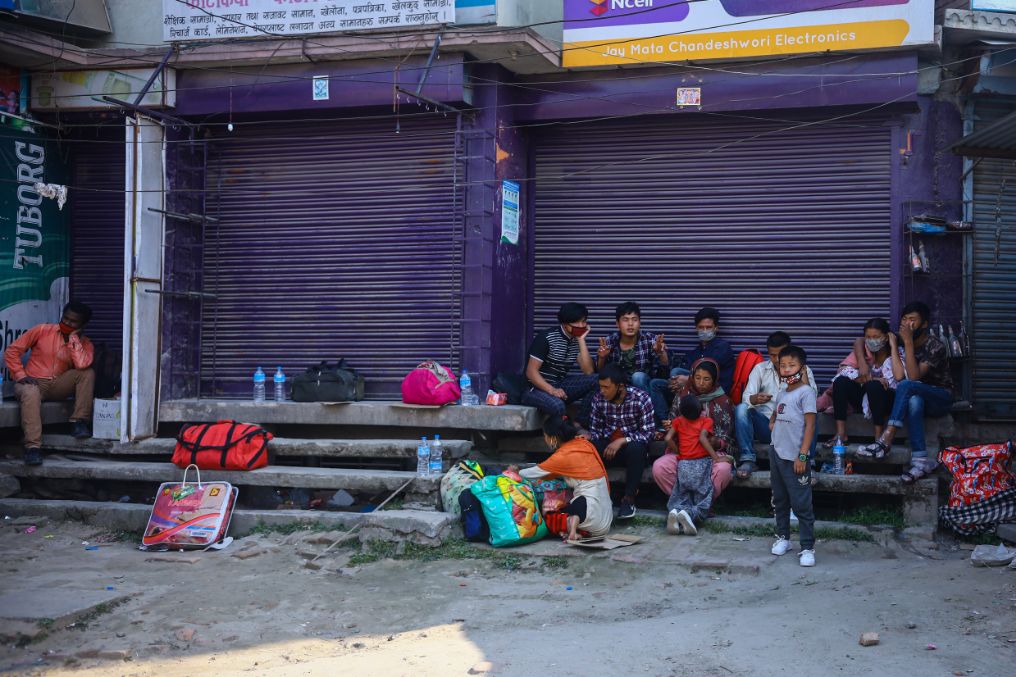 Travellers wait for a ride in front of a shuttered store in Dhulikhel, Kavre. It is a cluster of mostly young people accompanied by children and luggage that is comparably larger than those carried by most others. 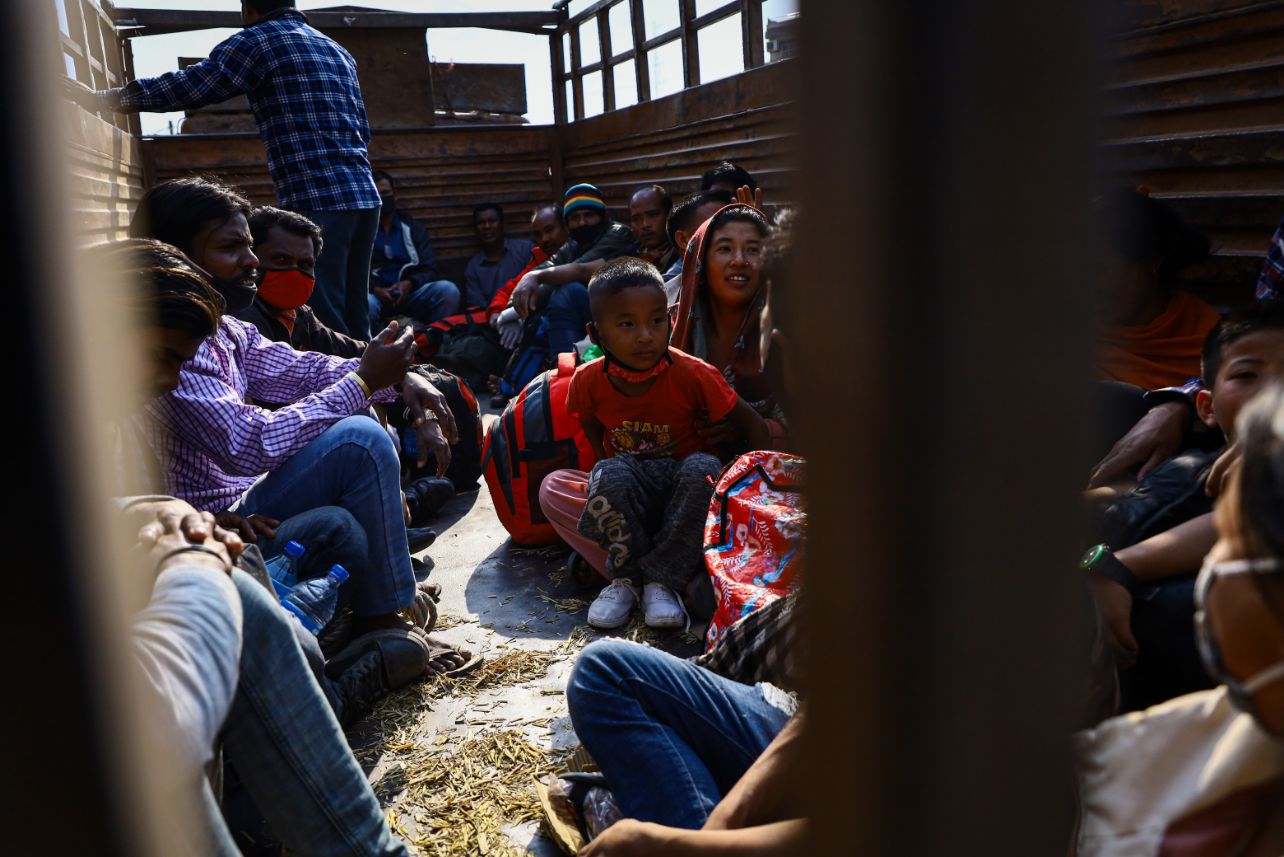 A somewhat cheerful image of a group travelling back home in the back of a truck. While the police have banned people from travelling in trucks, it is the fortune of a rare and lucky few to actually get rides on objects with wheels during this nationwide lockdown. 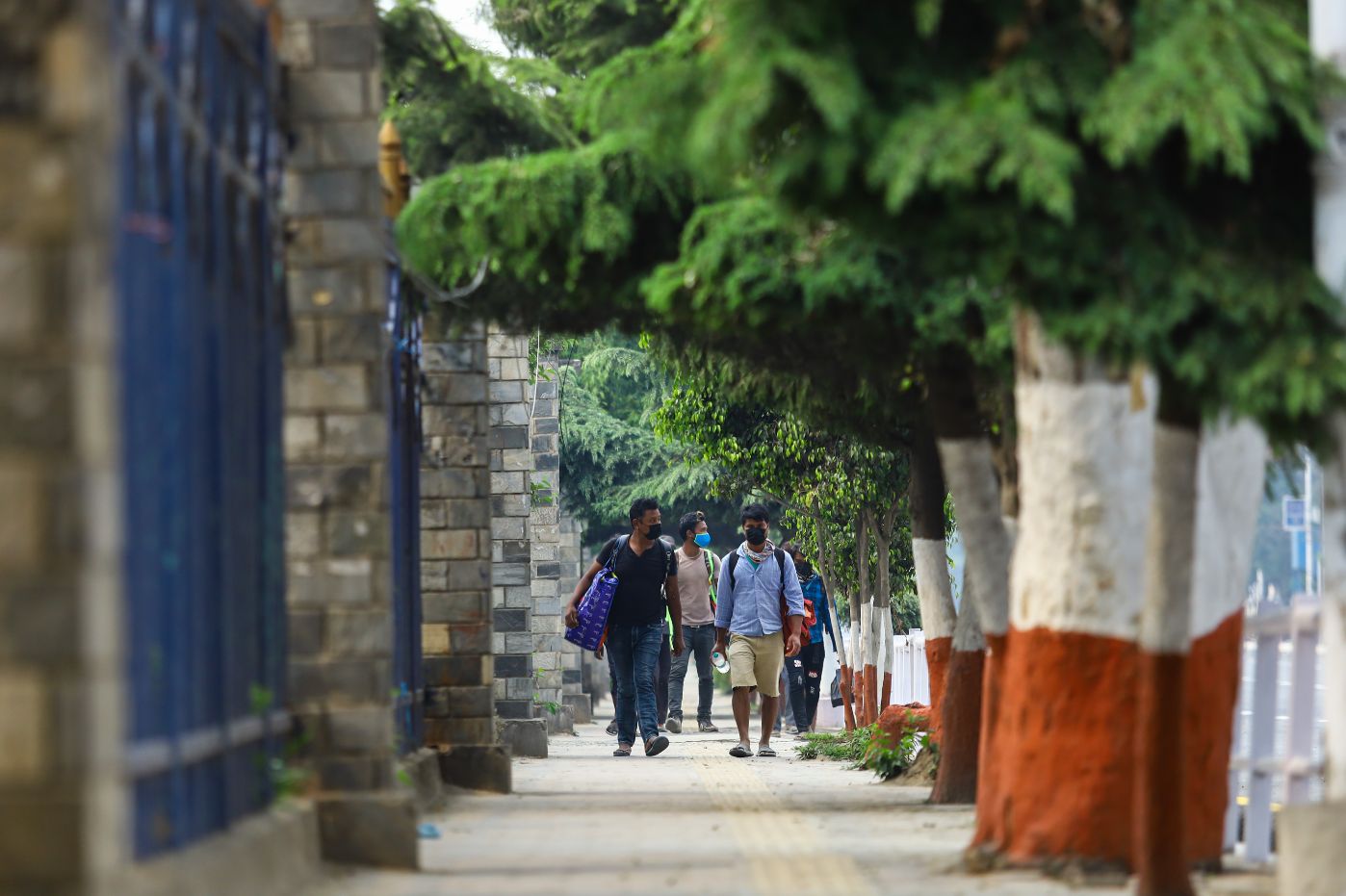 A group of construction workers who started walking from Sakhu at 8 in the morning and reached Bhadrakali at 3 in the afternoon. They hope to find some means of transport from Kalanki. If not, they will have to go on foot all the way to Bardiya. 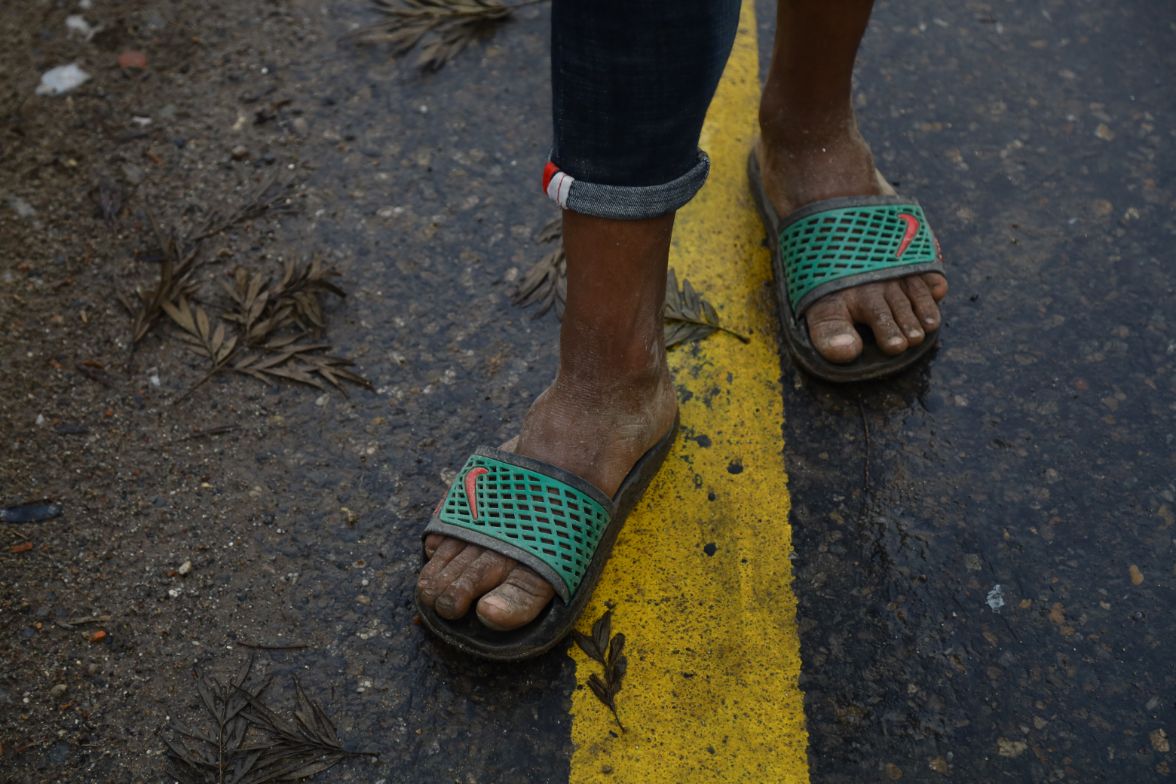 Shekhar Singh Tharu is ready to travel from Bhaktapur to Sarlahi on foot, in chappals. 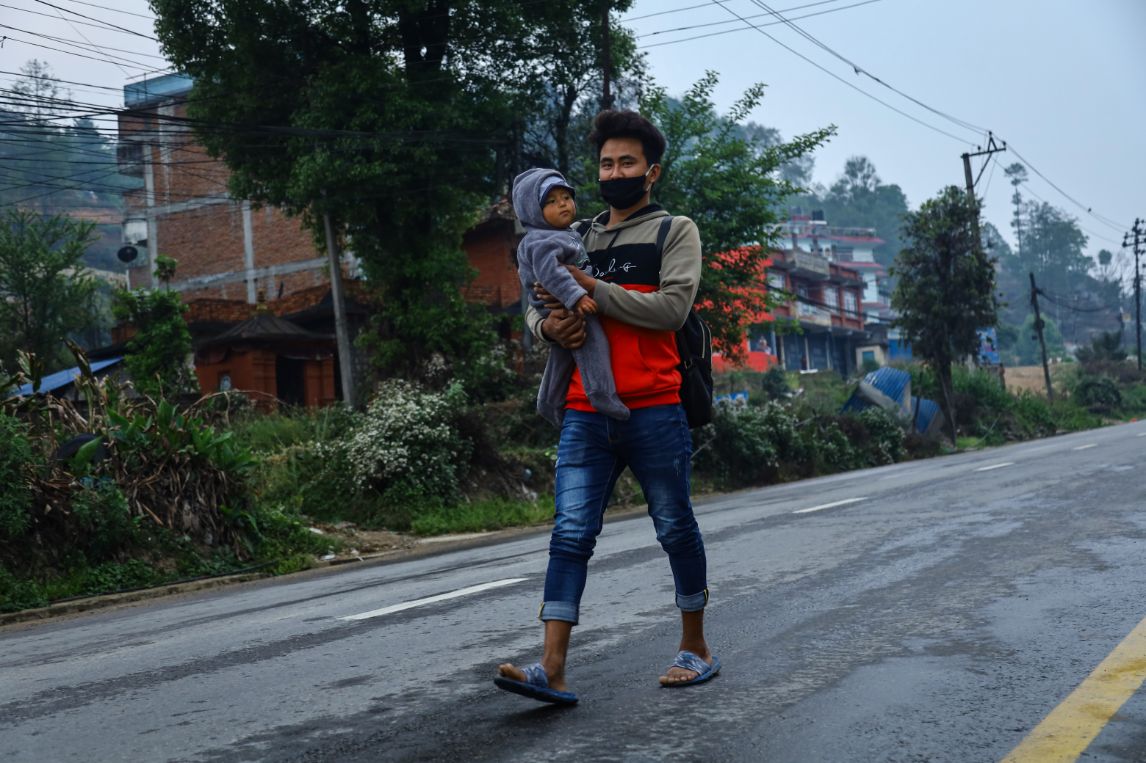 Not all travelling back home are carrying only bags. Here, Suman Magar is with his son as he begins his journey from Bhaktapur to his home in Ramechhap. 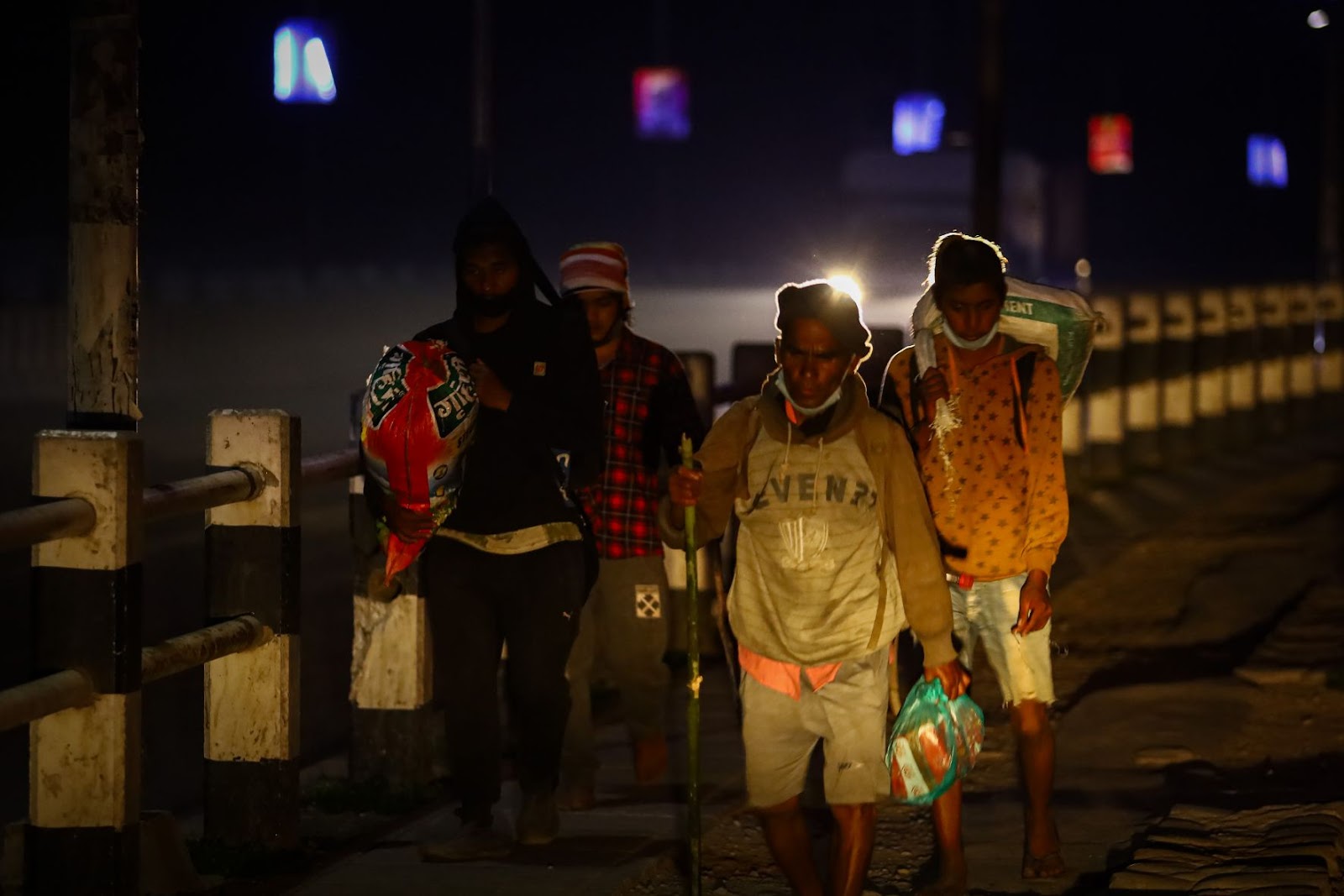 A group of arrivees from Mude in Sindupalchowk. A two-day journey brought them to Kathmandu and they will walk for countless more days before reaching their home in Salyan. In Sindhupalchowk, they were working at a construction site, earning a daily wage of Rs 800. 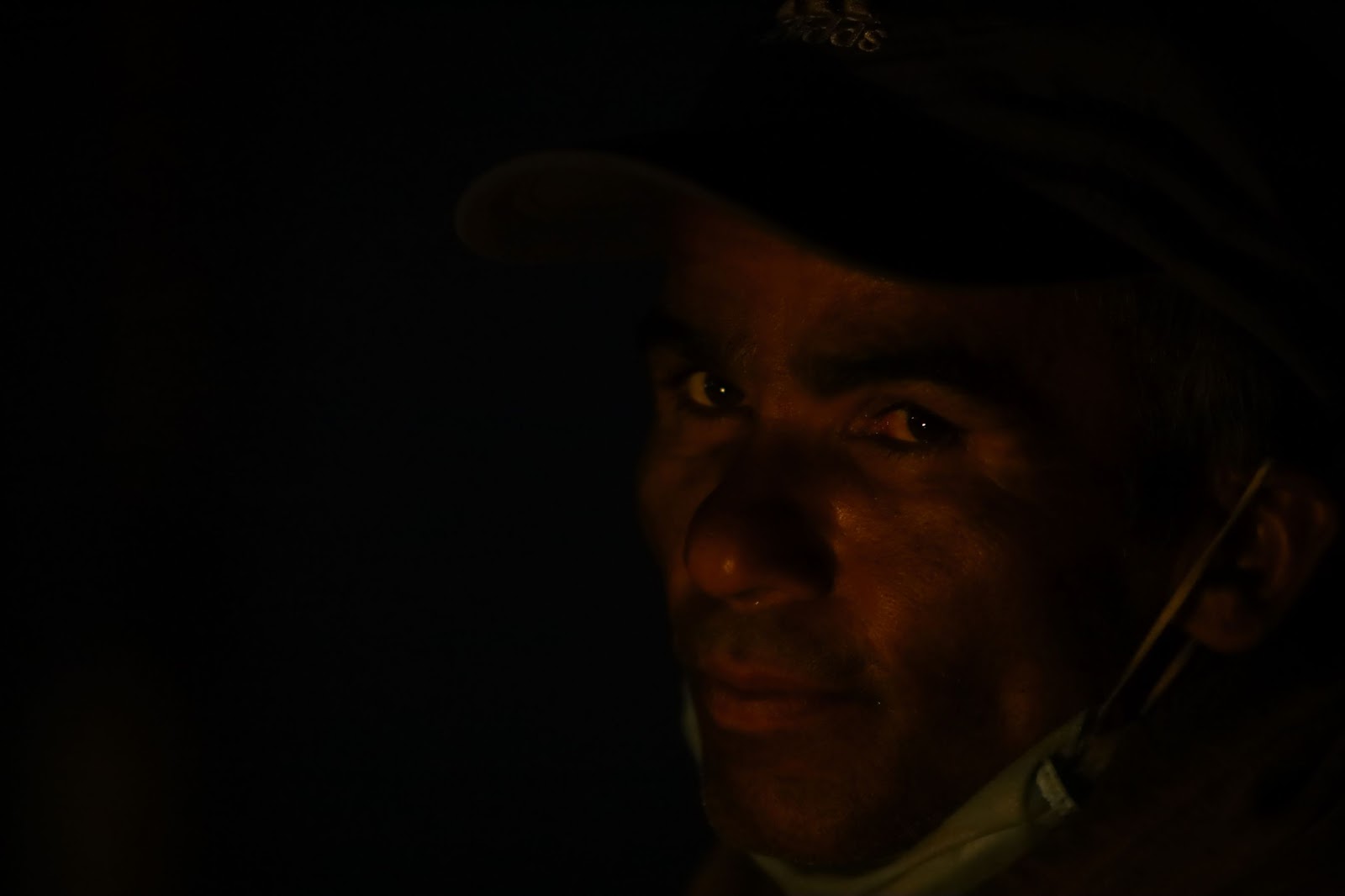 A close-up portrait of Dili Bahadur Bhandar, 54, one of the migrant workers arriving from Mude and heading towards Salyan. 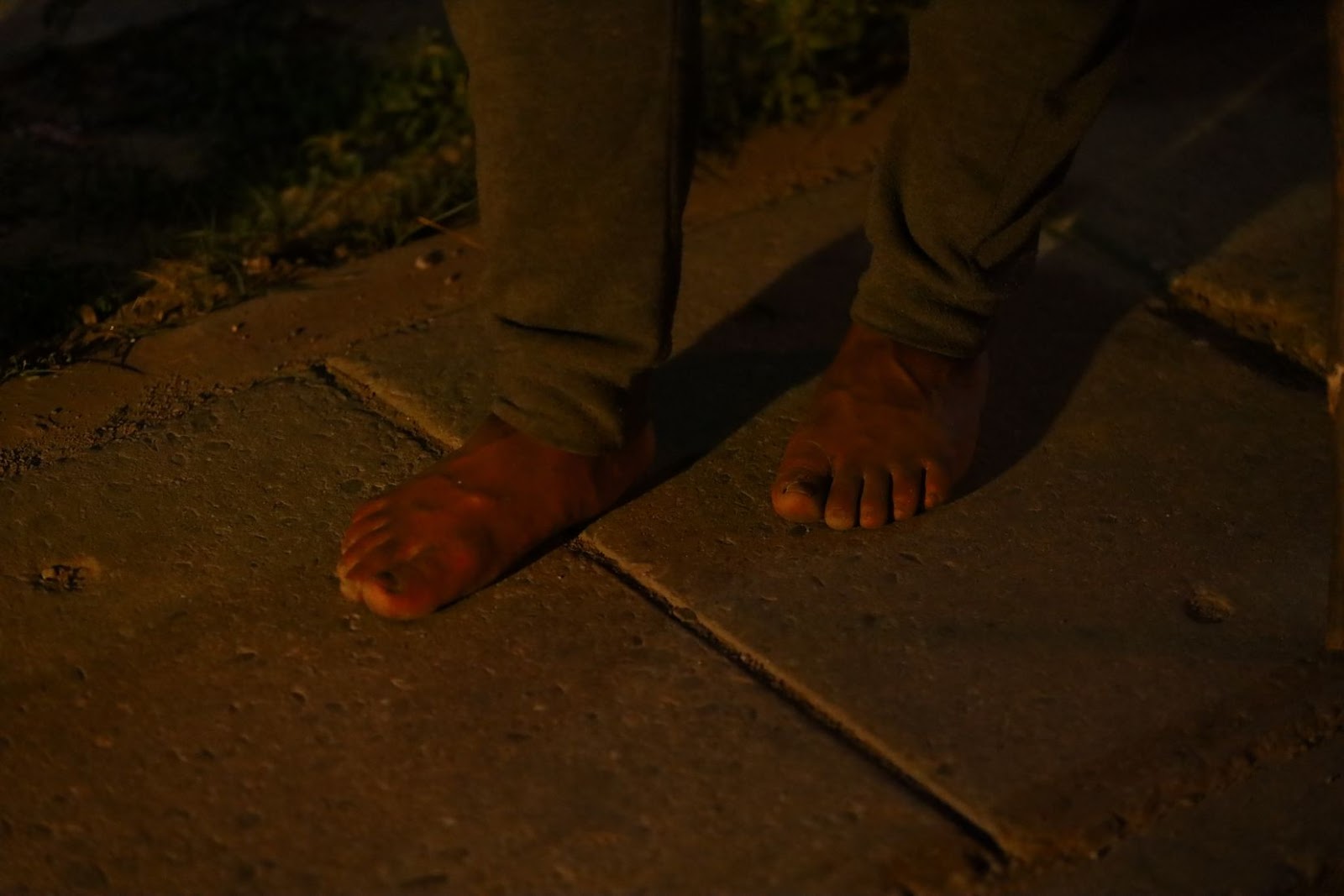 A picture of barefooted Lokendra Budathoki who arrived in Koteshwor, Kathmandu from Mude, Sindhupalchowk after already having made a two-day journey by foot. His aim is to reach all the way to Salyan, which is roughly 500 kilometers away.

Ayushma Regmi  Ayushma works at the intersection of gender, education, ecology and the arts.

Galvanized by a series of videos detailing one woman’s harrowing experiences of being raped as a minor, Nepali women and men take to the streets in protest.