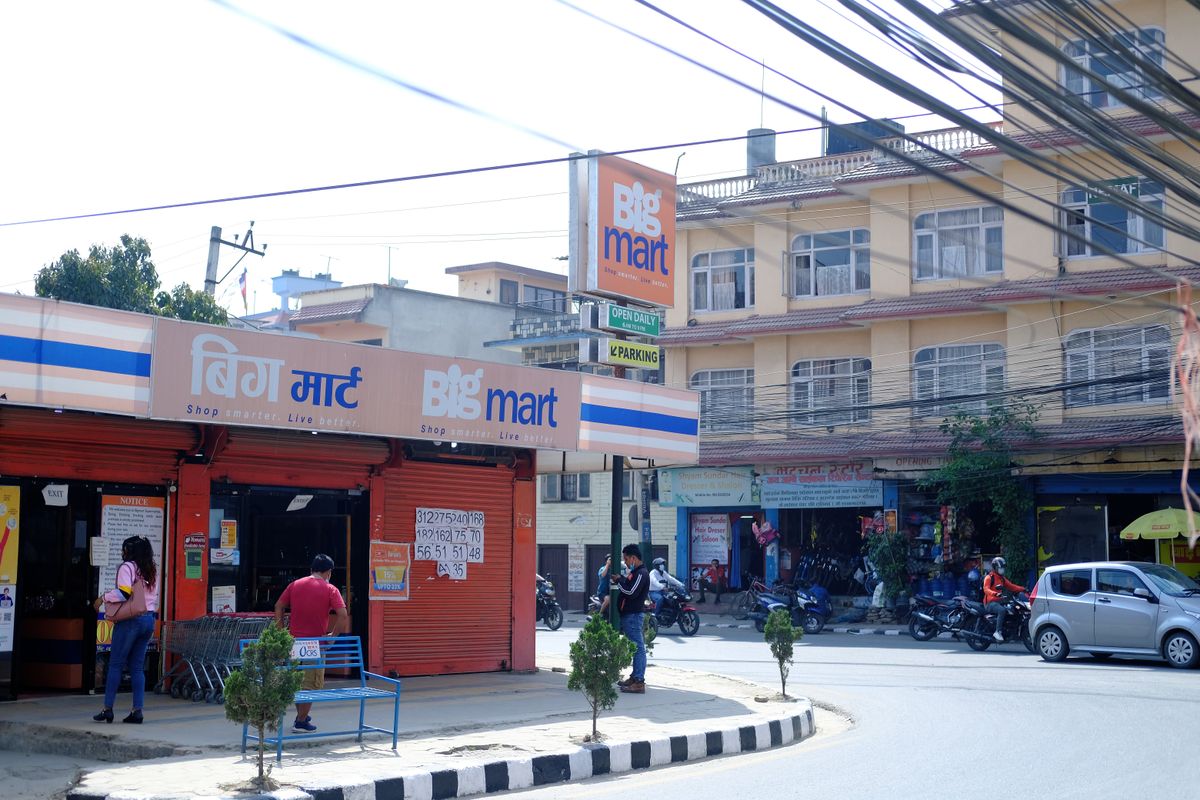 Kamal Dudraj had been operating his small ‘cold store’ in Kupondole for 15 years when, in 2017, a Big Mart opened up next door. The supermarket, which is just one of numerous chains that have sprouted across the country, took away much of his business, forcing him to relocate. Dudraj’s store is now located opposite the mart whereas the mart has expanded to his previous location.

“I have been able to sustain the shop as my children help me with its rent, but otherwise it has been difficult,” said Dudraj. “Small shops like mine cannot compete with stores like Big Mart and BhatBhateni. They take away business from small stores like mine.”

In the last decade or so, the Kathmandu Valley, along with many cities across the country, has seen an explosion of large ‘department stores’ or supermarkets. Chains like BhatBhateni, Big Mart, and Saleways now have outlets in almost every neighborhood in the valley. But, as the doyen of urban studies Jane Jacobs pointed out as far back as 1956, chain stores and supermarkets can destroy small local neighborhood stores that act as social hubs for the community.

Planners and architects are apt to think, in an orderly way, of stores as a straightforward matter of supplies and services. Commercial space,” Jacobs wrote. “But stores in city neighbourhoods are much more complicated creatures which have evolved a much more complicated function. Although they are mere holes in the wall, they help make an urban neighbourhood a community instead of a mere dormitory.”

In cities like Kathmandu, Lalitpur, and Bhaktapur, where neighborhoods remain siloed into smaller, self-sufficient units of commercial activity and social interaction, the entrance of chain supermarkets doesn’t just take away business but also irrevocably changes the urban landscape. It is not uncommon to see older residents spending time in the evenings at local cold stores, sipping tea and conversing with locals. At stores like BhatBhateni, the logic of capital prevails and the only reason for being present on the premises is consumption.

“From the urban economic perspective, big chain stores take away business from small entrepreneurs,” said Shweta Acharya, a student of economics at Kathmandu University. “However, Kathmandu thrives because of small vendors. Locals capitalize on the density of the population and open stores with their own small investment.”

Supermarkets do, of course, provide convenience and a wider range of products for customers. These large stores also tend to stock products that are often unavailable at local cold stores. They also create more jobs than cold stores, say economists.

“Small stores operate on a subsistence level but big chain stores are helpful for the consumer considering that they provide a variety of options,” said economist Saurab Man Shrestha, a program specialist for the Institute for Integrated Development Studies (IIDS). “Big chain stores also formalize the sector and provide employment.”

But experience from other countries, especially the United States where large chain stores are very common, shows that big retail corporations do not intend to compete with local stores; they aim to be the only game in town. An article by the US-based Institute for Local Self-Reliance points out that local stores benefit the local community by keeping the profits circulating within the local economy while chain stores tend to take their profits away to other locations.

“Even the employment opportunities provided by big chain stores tend to be restrictive. The profits earned by the big chain stores determine the socio-economic life of the employee whereas owning their own business can give them a sense of independence,” said Acharya.

Furthermore, “small, independent stores also create economic diversity and stability. Because they are locally owned, these stores are firmly rooted in the community. They are unlikely to move and will do their best to weather economic hard times,” says the article. “Chain stores, by contrast, tend to be fair-weather friends. They are highly mobile and will abandon a location if profit margins do not meet their expectations.”

Shrestha too acknowledged that large chain stores aren’t all benign and come with their own consequences.

“Big chain stores are powerful and can create market monopolies and oligopolies,” he said. “They can refuse to put products from specific brands on their shelves, denying the customer their right to choose.”

As large chain stores with a plethora of outlets are still a recent phenomenon in Nepal, there isn’t much research available on their impacts. And so far, many local stores have been resisting the influx of large supermarkets and subsisting on regular, repeat customers.

Indira Aryal, who has had a shop near the Naxal BhatBhateni for 37 years, reports that her store still sees a steady stream of customers.

“It's usually wealthy people or those with cars who visit these stores regularly,” she said. “For simple things like a packet of bread, most people still come to local stores.”

Ghanashyam Pandey, who owns a cold store near the BhatBhateni in Satdobato, agrees with Aryal.

“Big chain stores don’t sell half a kilo of sugar, so consumers still come to us to purchase small grocery items,” he said. “But, I have noticed that there is a disparity between small vendors and big chain stores. When there were restrictions for Covid-19, we had to close our shops while they were allowed to operate.”

For the time being, the Kathmandu Valley’s local cold stores appear to be weathering the storm but that too could change with the introduction of smaller ‘express’ versions of these chain stores. Chains like Big Mart have been opening up smaller outlets that resemble cold stores in their range of products on offer and their small sizes. While they may physically resemble cold stores, they, however, remain impersonal and lack a sense of community. Local cold stores are usually well aware of their regular customers, offering delivery services, off-hour services, discounts, and even delayed payments. The shopkeeper knows the customer and the customer knows the shopkeeper, leading to a symbiotic relationship.

“The sum of such casual, public contact at the local level. . . most of it fortuitous, most of it associated with errands . . . is a feeling for the public identity of people, a web of public respect and trust, and a resource in time of personal or neighborhood need. The absence of this trust is a disaster to a city street,” writes Jane Jacobs in The Death and Life of Great American Cities.

The arrival of a large chain store in the neighborhood thus prompts a mixture of excitement and fear. While customers often welcome the presence, local retailers are warier.

Pointing to the ‘opening soon’ sign of a BhatBhateni Superstore in Sanagaun, Lalitpur, local store owner Sabi Maharjan said, “We have had this shop for 20 years but now I am anxious as to what the future might hold for us.”

How Kathmandu’s new leaders can do right by the city

As the new leader of a city beset by problems, mayor Balen Shah will need to focus on small but sustainable solutions, advise experts.