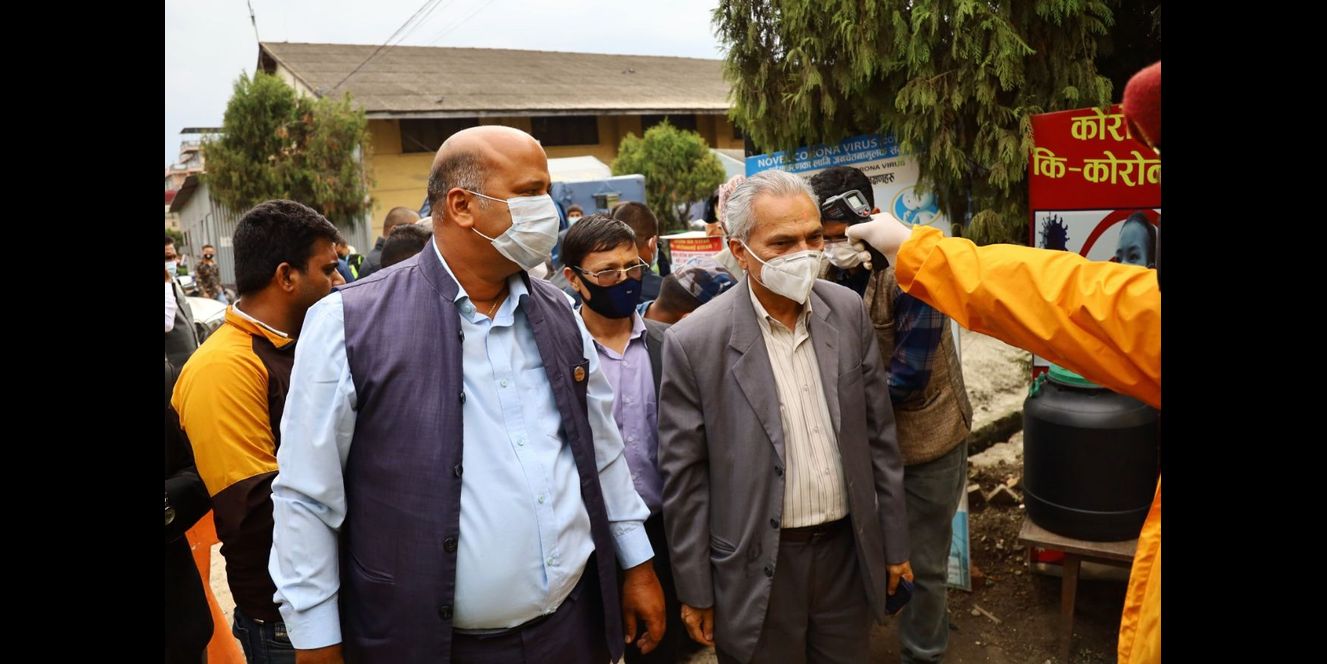 Lockdown extended till 7 May

A cabinet meeting took the decision on Sunday to extend the nationwide lockdown by ten days till 7 May. The lockdown was extended considering the increase in the number of cases of Covid19 outside Kathmandu. The decision comes a day after the government extended the ban on domestic and international flights till 15 May. The government first enforced a nationwide lockdown on 24 March, invoking the Infectious Disease Control Act, in order to restrict the spread of Covid19.

Senior government officials have hinted at changing the modality after 7 May.

Three new cases of Covid19 have been detected on Sunday. Two of the patients are 50-year-old residents of Birgunj while one is a 50-year-old male from Jhapa, according to the Ministry of Health and Population. One of the two Birgunj residents is reportedly an incharge of the city’s garbage management. Authorities have started tracking and tracing all the people who were in contact with all three.

With the two additional cases, the total number of Covid19 cases in Nepal has reached 52 of which 16 have discharged after recovering successfully.

Nepal Police have refused to register a complaint against Nepal Communist Party leaders for their alleged involvement in kidnapping a parliamentarian. On Sunday, several leaders of the Janata Samajwadi Party went to the Metropolitan Police Range to file an FIR against former IGP Sarbendra Khanal, Mahesh Basnet and Kisan Shrestha who have been accused of abducting MP Surendra Yadav.

Former prime minister and JSP leader Baburam Bhattarai and other senior leaders had gone to the police office in Teku on Sunday afternoon. The police refused to lodge the FIR, claiming that it fell under the jurisdiction of the Mahottari Police. Bhattarai consequently criticised the police and the Oli government in a series of tweets.

MP Yadav has accused former IGP Khanal and Basnet, a confidante of prime minister KP Oli, of abducting him from his home in Mahottari and bringing him to Kathmandu. He has also accused them of issuing veiled threats after he turned down their calls to split the Samajwadi Party.

While Yadav was being brought to Kathmandu, his party, the Samajwadi Party, hastily signed a merger deal with the Rastriya Janata Party. He later escaped from Marriott Hotel, foiling plans to split the Samajwadi leaders. JSP leaders claim Oli had mobilised the team himself after introducing new ordinances that made it easier to split political parties.

The Tribhuvan University has issued a directive alongside a classroom code of conduct for online classes as a growing number of affiliate colleges are shifting to distance learning due to the Covid19 lockdown.

Major highlights of the directive include the compulsory attendance of students and teachers as well as adherence to a dress code. Both teachers and students who are found flouting the directive could face disciplinary and departmental action.

Given the uncertainties over the resumption of regular classes, several colleges and schools have started classes through social sites like Zoom and even Facebook although many students, especially from remote regions, have not been able to join such classes due to the lack of internet facilities.

Former secretary Bhim Upadhyay, who was arrested last week for allegedly spreading false information targeting religious faith through social media, has been charged with cyber crime under the Electronic Transaction Act 2063.  In a case registered at the Kathmandu District Court, public prosecutors have charged Upadhyay of disseminating false information. If proven guilty, Upadhyay could face up to five years in prison.

Opposition parties and civil society members have demanded that the government release Upadhyay. The government has long used the Electronic Transaction Act 2063 to muzzle dissidents.

The Non-Resident Nepali Association (NRNA) has stated that at least 49 Nepalis or people of Nepali origin have died due to Covid19 in various countries across the globe, mainly in Europe and America.

In a statement, NRNA has said that at least 1,983 people have contracted the virus as of Saturday. The pandemic has particularly affected the Nepali diaspora in the United Kingdom where at least 33 deaths have been reported so far, according to NRNA media coordinator Chiran Sharma. There is a sizable population of veterans and their families in the UK.

In some positive news, there have been very few deaths in the Nepali diaspora in Gulf countries despite an increase in cases. There are around 1.5 million Nepalis working in the Gulf, most of whom continue to work regardless of the pandemic.

Over 100,000 Bhutanese refugees have been resettled in third countries but 7,000 remain in camps in Nepal, hoping that one day they will be allowed to return home.