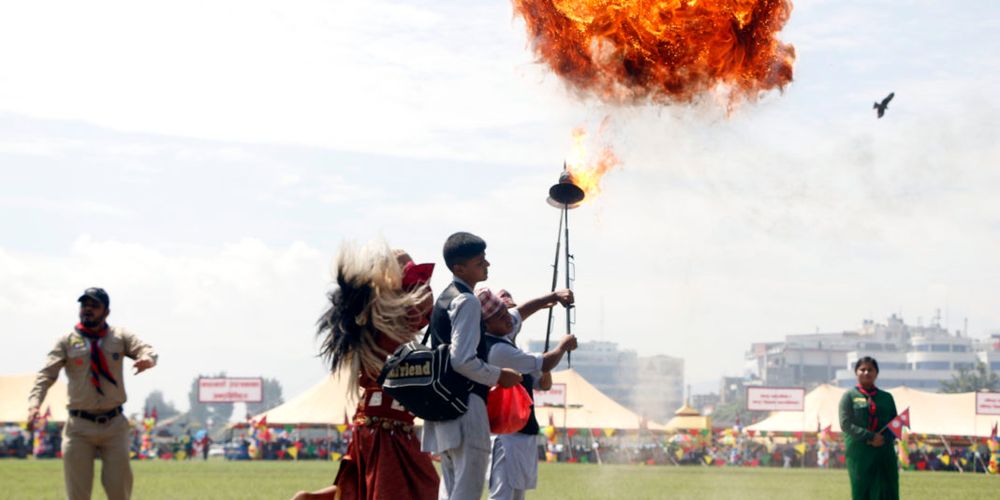 MPs of the ruling Nepal Communist Party (NCP) have blamed a broken health system and an irresponsible health minister for dengue outbreak as the mosquito-borne disease escalates into one of the worst national health crises in recent years. Speaking at the Parliament on Wednesday, NCP MP Nabina Lama accused Health Minister Upendra Yadav of “acting too late and doing too little” to contain the disease. Krishna Gopal Shrestha criticized Minister Yadav for turning a deaf ear to the health crisis.

“Have you even managed to visit Teku hospital?’’ Shrestha asked Minister Yadav, referring to Sukraraj Tropical and Infectious Disease Hospital which has seen a marked rise in the number of dengue patients in recent weeks.  MPs of opposition Nepali Congress have demanded Yadav’s resignation, accusing him of spending time in foreign junkets instead of paying attention to a crisis at home.

Following the ruling from Speaker to inform the house about the situation, Yadav told the parliament on Wednesday that the government was doing its best to control the disease. He said that there was little the government could do as there is no medicine to cure dengue.

“Even countries with better healthcare than ours are finding it hard to contain the disease,” Yadav told the parliament.

Minister Yadav left for the US on Thursday in what has been reported to be his 25th overseas visit in the last one and a half years.

The National Assembly approved the eighth amendment to the Land Related Bill on Tuesday. The bill will further limit a person’s rights to ownership of private land. The bill, endorsed with a majority vote through the Upper House of the Federal Parliament, has set a limit of 11 bigha land in the Tarai, 50 ropani in the hills, and 30 ropani within Kathmandu valley. Industries will be entitled to a one-time exemption to own land exceeding the ceiling by paying extra levy. The Nepali Congress has expressed strong reservations towards some provisions in the new bill, particularly the clauses that allow industries to sell their land.

The fourth Constitution Day was celebrated on September 20 amid protests from the Socialist Party (SP) and Rastriya Janata Party Nepal (RJPN), the two Madhes-centric parties that were at the frontline of anti-constitution protests held during the promulgation of the statute in 2015.

Province 2 Chief Minister Lal Babu Raut had initially announced that he would attend a Constitution Day program, but he later changed his mind. He instead attended an interaction program on constitutional amendments. Some of his cabinet members observed it as ‘black day.' Raut’s party, SP, led by Deputy Prime Minister Upendra Yadav, had announced that it would neither commemorate nor condemn the day.

Madhes-based parties and various ethnic groups have been demanding revisions in the constitution since the then Sushil Koirala government, which had the backing of over 90 per cent lawmakers of the Constituent Assembly, pushed through the constitution amid opposition from Madhesis, Janajatis, women and other groups.

Speaker of the House of Representatives Krishna Bahadur Mahara has accused the parliamentary committees of preventing the government from discharging its regular duties.

Mahara, while addressing a program organized by the  parliament in the Capital on Monday, claimed that the parliamentary committees were impeding works of the government by issuing various directives.

The committees, he suggested, should limit its work to supervision and monitoring instead of creating obstacles.

Since assuming the office in March last year, Mahara has repeatedly grabbed headlines for acting like a cadre of the ruling Nepal Communist Party although the parliamentary tradition requires house speaker to be above partisan politics.

Dr. Sunduk Ruit, an ophthalmologist who revolutionized small-incision cataract surgery, was awarded this year’s Prime Minister National Talent Award on Sunday. A cabinet decision to award him was made public on Thursday.  Ruit has restored the sight of 130,000 people across the globe with his surgery technique widely acclaimed for its success in saving time and money.

Agitating Melamchi workers to get due salaries

The government has decided to clear the due salaries of agitating vendors, local subcontractors and workers involved in the construction of the Melamchi Drinking Water Project. Information Minister Gokul Bastoka, during a weekly press meet held on Thursday, said that the cabinet has made the decision to pay the agitating workers.

Hundreds of workers have been demanding payment since the government terminated the contract of the Italian contractor Cooperativa Muratori e Cementisti di Ravenna. The company had pulled out of the project without paying due salaries to workers and subcontractors. More than 400 workers have been staging sit-in protests at the project site since the beginning of this month.

Following the termination of the contract with the Italian contractor, the government has handed over the project to Chinese company Sino Hydro Corporation Limited. The project, once in operation, is expected to supply 170 million litres of water to the Capital.

Nepali Congress has urged the government to put controversial bills on hold and start all-party meetings to forge consensus on disputes. During a meeting with Prime Minister KP Sharma Oli held at his residence on September 15, an NC delegation led by President Sher Bahadur Deuba emphasised the need for an all-party consensus on controversial bills awaiting approval of the parliament including the Citizenship Bill, the Security Bill and the Media Bill.

The meeting was held a day after NC had tabled a note of dissent at the parliamentary state affairs committee to remove clauses in the Citizenship Bill that require foreign women marrying Nepali men to wait seven years to acquire citizenship.

Nepal and China will sign an agreement to construct a tunnel connecting Kathmandu with Kerung of Tibet during the forthcoming visit of Chinese President Xi Jingping, Deputy Prime Minister Ishwor Pokharel has said. Speaking at a program in Jhor of Tokha municipality on September 14, Pokharel announced that Chinese President Xi would inaugurate Jhor-Gurjebhanjyang tunnelway encompassing the hills of Kathmandu and Nuwakot district.

“He will inaugurate the Jhor-Gurjebhanjyang tunnel which will connect Kathmandu with Kerung,” Pokharel said. Although Pokharel didn't reveal the date of the much-talked visit, his disclosure has been received as an official confirmation of the Xi's visit, expected to take place in October this year.

Minister Bhattarai embarrasses himself yet again

On September 14, Minister for Culture Tourism and Civil Aviation Yogesh Bhattarai made fellow passengers on board Budhha Air Nepalgunj-Kathmandu flight lose their cool after he boarded the aircraft fifteen minutes behind schedule. Video footage recorded moments before the takeoff shows an enraged group of passengers demanding justification for the delay.

Flight delays due to VIP movement aren't uncommon in domestic flights and this episode too, despite some criticism, would have passed without notice if it wasn’t for Bhattarai’s accusation that those annoyed at his behavior are “royalists scheming to tarnish his image.”

On Sunday, police arrested Gyanendra Bahadur Shahi, one of the protesters who had confronted the minister, for his alleged misconduct inside the aircraft.  Kaski chapter of the ruling Nepal Communist Party's student wing then announced that Shahi was not allowed to visit Kaski.

The moves generated huge public backlash with many condemning  it as yet another example of shrinking space for dissent in 'Oli Raj'. Police eventually released Shahi on September 16.