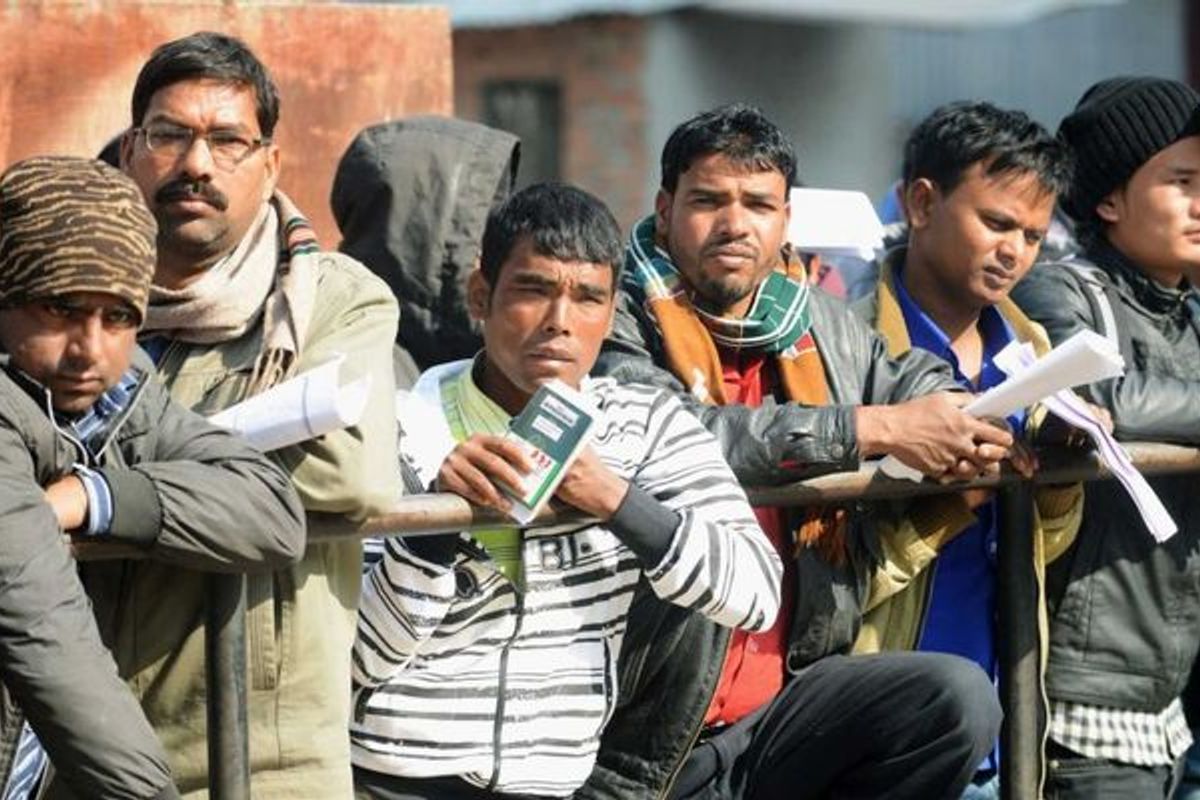 The estimated 3.5 million migrant workers who live and work outside of Nepal are eligible to vote. But despite their numbers, there are no provisions for them to vote, disenfranchising almost 10-12 percent of the country's entire voting population. (The Record)

The last time 52-year-old Bilbahadur Gurung voted in an election was more than 20 years ago.

In 2002, at the age of 31, Gurung left his family and home in Syangja to go to Qatar as a migrant worker. Over the next 20 years, Gurung worked his way up the ranks and today, works in the accounts department of a construction company.

“It’s not easy living apart from your family, seeing them only once a year. But I had to do it to make a living,” said Gurung.

In the 20 years that Gurung has been abroad, Nepal has gone through massive changes, transitioning from a constitutional monarchy to a republic and from a unitary model to federalism. But Gurung has had no say in any of this. With local elections now coming up in April, he would finally like to exercise one of his fundamental rights –  the right to vote.

According to a UN report, Gurung is among the approximately 2,600,000 Nepalis currently working outside of Nepal. Although there is no accurate, up-to-date data on the number of migrants who are abroad, estimates place this figure as high as 3.5 million, or 12 percent of the current total population. All of these migrants are eligible to vote but despite their numbers, there are no provisions for migrant workers to vote, disenfranchising 10-12 percent of the entire voting population. As per Nepali law, citizens are required to cast their votes from their official place of residence and there are no provisions for absentee voting.

“I have a Nepali citizenship and a Nepali passport, but everytime someone talks about voting, I don’t feel like a Nepali because I have no voting rights outside of the country,” said Gurung.

Besides representing a significant portion of the total population, migrant workers have had an outsize impact on the economy and development trajectory of the country. Remittances that come from the millions of migrant workers currently working abroad have in recent years been equivalent to over a quarter of the GDP. In the fiscal year 2018-19, migrants sent home 8.79 billion USD, over 28 percent of the country’s GDP. That year, Nepal was the 19th biggest beneficiary of funds sent by migrants around the world, according to a World Bank report.

These remittances have helped expand the middle class and pushed Nepal’s graduation out of the least developed country category. But without the right to vote, they have little-to-no say in who gets elected and what policies are drafted.

“A large portion of our country’s economy falls on the shoulders of people like me and yet, when it comes to exercising our right to choose our leaders, we are completely deprived,” said Gurung. “It makes me feel like the government sees us as only ‘remittance-making’ machines and nothing more.”

Back in 2018, acting on a public interest litigation (PIL) filed by the Law and Policy Forum for Social Justice in Kathmandu, the Supreme Court had issued a directive to the government to facilitate ‘out of country’ voting for Nepali diaspora across the world. Four years later, no progress has been made. And with local elections just around the corner, millions of Nepalis will yet again have no say in who gets elected, and by extension, no say in the policies and laws that will govern them.

The Election Commission, the constitutional body mandated with conducting elections in the country, has been advocating for absentee voting but officials say that their hands are tied.

“There are no regulations, no laws. Until a law is passed by Parliament, we can’t do anything,” said Chief Election Commissioner Dinesh Thapaliya. “But we have been persistently pushing for such provisions to be available for Nepalis across the world.”

The right to vote is a universally guaranteed right. Article 21 (3) of the Universal Declaration of Human Rights clearly states: “The will of the people shall be the basis of the authority of government; this will shall be expressed in periodic and genuine elections which shall be by universal and equal suffrage and shall be held by secret vote or by equivalent free voting procedures.”

Migrants themselves have been demanding the right to vote for years now and have been supported in their fight by the General Federation of Nepalese Trade Unions (GEFONT). Yet, there has been no movement at all on the issue since the Supreme Court order.

“Despite speaking about this vehemently for years, the state has done little to make us feel like we’re a part of the country,” said 56-year-old Dharam KC, who has been working in Saudi Arabia since 2000.

KC has not been able to cast his vote once since then, despite numerous momentous elections taking place. KC, like most migrants, cannot afford to take time off from their jobs to travel all the way back to their home districts in order to cast their vote.

In addition to not giving migrant workers their voting rights, migrants also have no representation in any of the government bodies that formulate policies and laws on the welfare and safety of migrant workers, said KC.

“Representatives of manpower agencies, politicians, and lawmakers are part of the Foreign Employment Coordination Committee but not a single migrant worker is a part of it,” he said.

According to the 2020 Nepal Labour Migration Report, the latest national report, in the last decade since 2008-09, the Department of Foreign Employment has issued over 4 million labor permits to Nepalis.

“Not being able to vote is a violation of human rights in a democracy. More than 150 countries around the world have a legal framework for out-of-country voting. This includes many countries that are just as, or even more, constrained and capacity challenged as Nepal,” said Khagendra Dhakal, co-author of a policy brief titled ‘External Voting Rights for Nepalis Abroad: Reflections from International Practices’ for the think-tank, Nepal Policy Institute.

External voting rights are currently exercised by wealthy countries like Canada, Sweden, Denmark, Austria, etc, where voters cast their vote through the post, at polling stations in their respective embassies, or online. But it has also been implemented by developing countries like Nigeria, Turkey, and Mexico.

In South Asia, the only country that absentee online voting is Pakistan, where voters can log into their national overseas voting system and cast their ballots. India too — despite its 32 million overseas population — has not been able to do much on allowing its migrant citizens to exercise voting rights. In 2010, it amended the Representation of People Act, allowing voting rights for all overseas citizens and giving them voter identities, but overseas voters must be physically present at their original constituency to vote, making it infeasible for most migrants to actually cast their votes.

Most countries, including Nepal, have been unable to formulate plans and policies to make external voting facilities available because of various administrative and financial limitations.

“There are a lot of limitations when it comes to ensuring Nepal’s out-of-country population gets voting rights, despite it being a fundamental human right. Our inconsistent government leadership is the biggest hindrance, of course,” said former chief election commissioner Bhoj Raj Pokharel, who peer reviewed the policy brief. “Countries around the world carry out out-of-country voting through the post or by installing voting booths at embassies, but neither of these options is feasible for Nepal. This is because we have a dismal postal service and our population is so scattered that placing voting booths at embassies across the world will be very expensive and laborious.”

In the policy brief, Dhakal, and his co-author Isha Mandal, add: “For the government the primary reasons for not being able to demonstrate progress on this matter has to do with the administrative issues on ballot secrecy and transparency and the logistic issue of conducting elections in territories where they lack jurisdictional capacity.”

According to Dhakal, the only way to ensure migrant workers, and the rest of the Nepali voting diaspora, their voting right is through internet voting, which is currently being practiced by eight countries in the world, including Estonia and France.

“I-Voting [internet-based voting] can be an efficient, legally hassle-free, trustworthy and economical method. Every one of us has a smartphone connected to the internet in our hands, why can’t we embrace the technology that we already have?” he said.

Having said that, complications could arise with i-voting as well.

“A lot of migrant workers could be taken advantage of by political parties by influencing their decision making or the whole voting process could be hacked and rigged,” said Pokharel. “Unless the people trust technology and the political parties, and the parties trust each other, this system will remain a sweet, distant dream.”

Dhakal is more optimistic, saying it is doable as long as there is political will. But for the near future, and the upcoming elections, it appears that migrants like Gurung and KC will once again not be able to cast their votes.

“We are being treated as complete outsiders. Robbing us of our right to choose our political leaders is an injustice,” said KC. “Every year, you hear news of poor labor migration laws and facilities affecting the welfare of Nepalis abroad, but when it comes to actually allowing us to choose leaders who could perhaps bring actual change to our situations abroad, the state denies us our rights.”

Election results show that number of voters, not population, should be the basis of constituency delineation

The nationwide local elections, held for the second time since Nepal went federal, concluded at 5pm with relatively free and fair voting, amid sporadic incidents of violence.