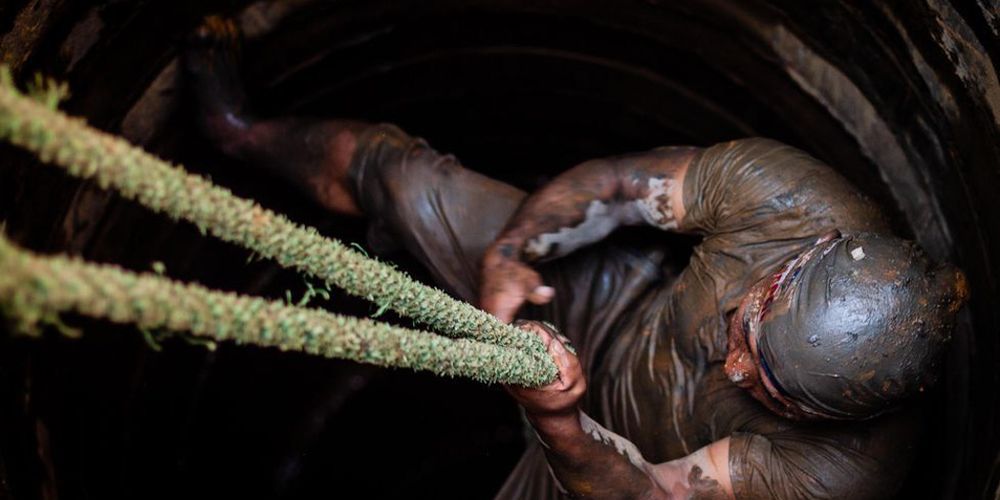 After almost two hours of digging, 25 years old Hari Majhi climbed out of the well he and his co-workers had been burrowing for three days. Clinging to the tethered ropes, his voice gasped as he came to the surface.

He explained the well is nearly thirty 35 feet deep and the chances of finding water are still sparse.

“The deeper you go, it is harder to breathe. The availability of oxygen gets thinner making respiration much difficult,”Majhi said.

Majhi along with two other friends had been digging the well for a building that would later complete in becoming a party venue at Soltimode, Kathmandu. The well will be a source of water for over 300 people during peak business seasons.

Almost a year in the well digging business, Majhi still fears his work as he says the risk is always there lingering and waiting. He feels fortunate to not have suffered  any serious casualties.

“This is a dangerous work. It can be a trap at times. You never know when carbon dioxide and methane gas is released while working underground,” said Majhi.

“That is when breathing feels heavy and we climb to the top for safety,” he added.

Only a month ago, he had a minor head injury. A piece of stone slipped from the top while he was digging at the bottom of another well. However, he says that incident is nothing serious compared to others. He has confronted incidences when some of his friends had sustained serious burnt injuries.

As a traditional practice, a lit candle is roped down to check the risk of gas leaks. If the candle keeps burning until the bucket holding the candle reaches the bottom, then there are no eminent risks of working below.

“But you never know when the gas might emerge while the digging and levering of the mud continues,”  Majhi said, "The best thing to do to survive during the emission of gas is to ascend up as fast as you can."

He shared the availability of well water depends on the location as he remembers digging up to 90 feet. Sometimes  to no avail.

“Sometimes the digging and fixing of rings end at 10 feet. There are times, when we have dug up to 90 feet and left the well undone when water failed to reveal,”Majhi said.

Majhi, originally from Sindhuli, never completed his school and came to Kathmandu for work. Having getting brushes of different labour works, he finally ended up digging wells for a living.

The hardship of finding water is also present at his rented flat at Baisipati in Lalitpur. He lives in a joint family and the scarcity of water is an everyday hassle.

An old well remains outside their house unused for years after it stopped producing water. Tap water comes once a week and the water source is almost 20 minutes walk from their house.

He lives with his brother, his sister-in-law, both father and mother-in-laws and two children from this brother’s side.

According to Saraswati Majhi, his sister-in-law, sometimes it takes almost an hour to fetch the water.

“You have to leave early morning or you will lose the chance of filling the water in a short time. When I have washing to do, I have to spare an extra hour to reach home before I start cooking for others,” Swaraswati said.

“Scarcity of water is a huge problem here. At times I wonder what will happen to us if the water spout goes dry. We might have to find another source of water or shift to other house,” said Majhi.

He was once married and has a five year old daughter. However, she left him with their daughter due to family dispute. Every time while digging a well, he thinks about his daughter. He fears for his daughter, in the case that he suffers an injury.

He explains there is no certainty about his work. However, if he continues, he has plans to establish his own well building company.

“If death come calling, I will die in the well. God has sealed my fate. I will live until my fate calls it a day,” he said.

This story package was produced by Riwaj Rai and Utsav Maden during the multimedia media and web documentary workshop hosted by Photo Kathmandu.

We welcome your comments. Please write to us at [email protected] Subscribe to our youtube channel for more documentaries.

Riwaj Rai And Utsav Maden  Riwaj Rai is a freelance multimedia journalist. Utsav Maden is a photographer. He blogs at utsavmaden.com.np

Injured in Saudi Arabia, a worker is told: “It was your bad fate”

Lured abroad with false promises, Mumtaz Rain returned in pain and in debt