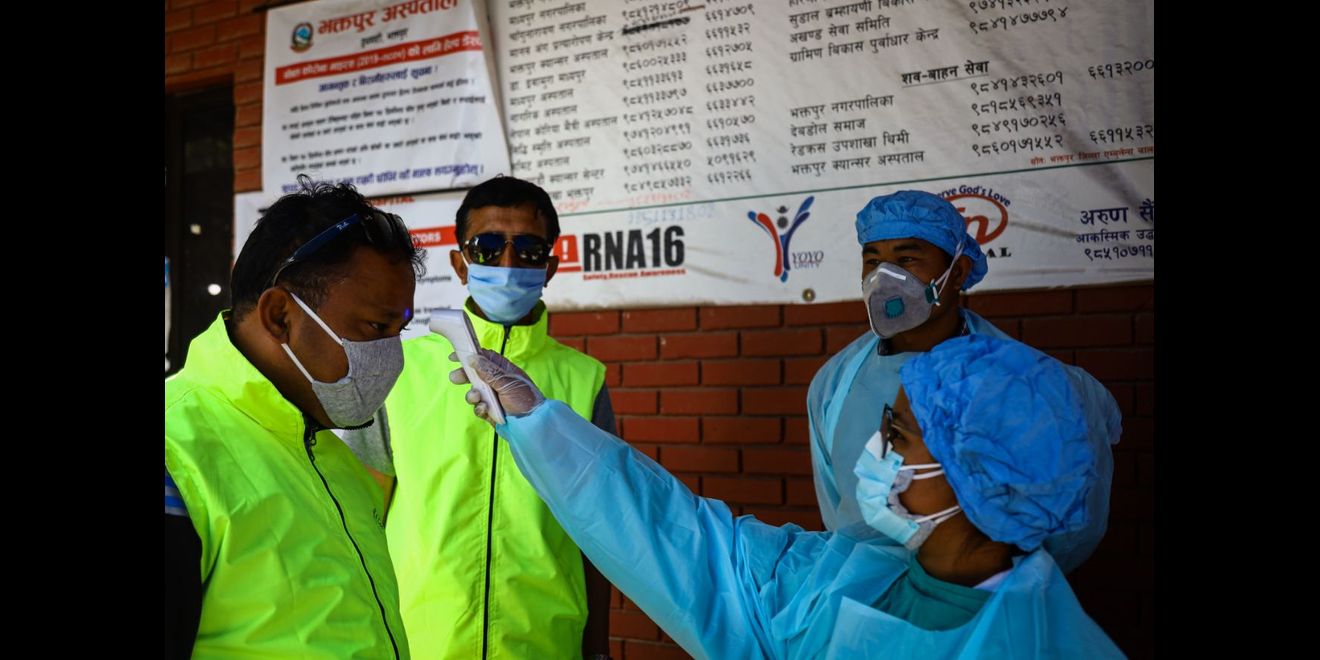 The Ministry of Health and Population on Friday confirmed the Covid19 infection in an additional 59 people. The infected are from Banke, Kailali, Kapilvastu, Morang, Dadeldhura, Bhaktapur and Baitadi, according to MoHP spokesperson Bikash Devokta. Most of them are reportedly returnee migrants from India or their family members and friends. With the new cases, the total number of Covid19 cases in Nepal has reached 516.

Experts say the growth in the number of Covid19 cases is worrying because it is occurring despite the number of tests remaining dismally low. As of Friday afternoon, Nepal had tested 42,488 samples through the PCR method and 82,116 samples through the RDT method. Nepal has so far confirmed three deaths, while 70 people have been discharged after successful treatment.

The safety of frontline workers has started to dominate public discourse as Covid-19 continues to spread unabated among these workers, long considered to be at a higher risk.

On Friday, four security officials, one nurse, two civil servants, two journalists, and an inmate tested positive for the virus, according to officials at the health ministry. And although their job puts them at a high risk of exposure, the police have been forced to work without PPEs and basic protective gear such as face masks.

With the increase in detections, the government has also increased the testing of both police and health workers, while officials at the Ministry of Health and Population have been asked to work from hotels.

A team of Nepal Army personnel buried the mortal remains of a man who died due to Covid19 on Thursday. According to officials, his body was buried in a forest near his village. The family members had initially refused to allow the conducting of last rites, blaming the hospital’s negligence for his death. But they later allowed the burial after local authorities agreed to conduct an investigation into the alleged negligence.

The man, a 41-year-old teacher from Gulmi, had died while receiving treatment at Crimson Hospital in Butwal.

In related news, the newborn baby of the woman who died due to Covid19 on May 14 has been discharged from Dhulikhel Hospital after she tested negative for the virus. The baby is three weeks old. Her mother had died while she was on her way to Dhulikhel hospital for a medical emergency.

The detention cell at the District Police Office, Baitadi, has been sealed, and its staff and inmates have been kept in quarantine following the confirmation of Covid19 in an inmate. The move came after a 22-year-old youth of Shivnath Rural Municipality tested positive for the virus, according to Deputy Superintendent of Police Dilli Narayan Pandey. Human rights groups, including Amnesty International, have long warned the government about the risk of the virus’s spreading in prison cells. There are around 25,000 prisoners in 72 prisons across the country, according to the Department of Prison Management. Most prisons are housed in dilapidated buildings and do not have basic facilities such as running water, clean toilets, or adequate space for movement and exercise, let alone provisions for proper health care. Earlier this  week, the Kalimati police circle in Kathmandu was also sealed off following the confirmation of a virus in two policemen.

The Women and Social Affairs Committee of the legislature parliament has directed the government to not withhold social security allowances for single women under 60 years of age and for persons with disabilities. The government has decided to hold back social security allowances from certain beneficiaries, citing a constraint on resources. Following a meeting on Friday, the committee said that the decision to withhold security allowances would make the already vulnerable sections of the community even more vulnerable. The government has been mulling over cutting benefits while increasing the scope of taxes in order to manage resources for the upcoming fiscal budget. Unlike Nepal, several other countries, including India, have started to provide cash to the poor and vulnerable people hit hard by Covid19.

Veterinary care is an essential service

The Supreme Court ordered the government to include veterinary care as an essential service. Responding to a petition filed by the Nepal Veterinary Association, a joint bench of SC justices Sapana Pradhan Malla and Hari Prasad Phuyal on Thursday ordered the government to deem veterinary services as an essential service. Veterinary care was not included in the list of 44 essential services that were allowed to continue operating during the initial phase of the lockdown. The earlier exclusion has prevented both public and private veterinarians from providing emergency care to animals and pets.

Shuffling along, humor over despair, the nationalist gambit