Getting to know the two young independents running for Kathmandu mayor

Getting to know the two young independents running for Kathmandu mayor

Balen Shah and Sunita Dangol are both first-time candidates running independently for mayor of the capital city. What is their vision and what are their plans? 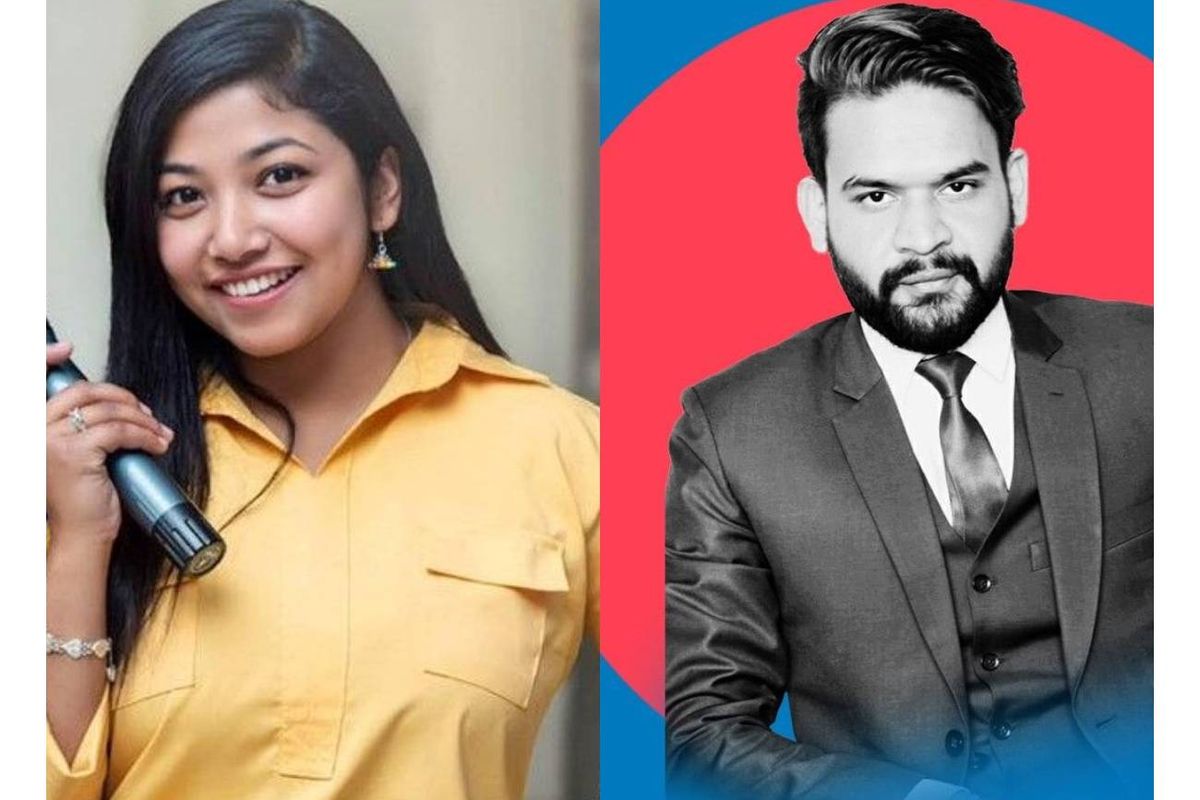 UPDATE: On April 24, Sunita Dangol announced that she would not be running for mayor anymore and instead would be running for deputy mayor on a UML ticket with Keshav Sthapit as mayor. Sthapit has been accused of sexual harassment by a number of women.

In 2017, during the last local elections, 21-year-old Ranju Darshana made history by becoming the youngest candidate ever to run for mayor of Kathmandu. Darshana, who ran as a candidate of the Bibeksheel party, did not win but she managed to come third, garnering an impressive number of votes for a first-time candidate. Darshana's run established something of a precedent –  that young people too can run for political office. And that is exactly what two young candidates are doing this time around for the upcoming local elections to be held at the end of April.

Balen Shah, a 31-year-old engineer and sometime rapper, declared his candidacy a few months ago, and more recently, so did Sunita Dangol, a 29-year-old communications professional and indigenous manuscript campaigner. Both of them are running as independents against candidates from more established parties like the Nepali Congress, CPN-UML, and the Maoists. None of the parties have announced their mayoral candidates yet but Kathmandu’s incumbent mayor, Bidya Sundar Shakya of the UML, has expressed his desire to run again.

The Record recently spoke to both Shah and Dangol to learn more about their reasons behind running for mayor and their plans for the capital city should they win. Excerpts:

Why run for mayor?

Both Shah and Dangol said that they were tired of seeing an older generation that did not understand the problems and issues of the youth in power.

“I have seen young people being used for political gain and I want to change this,” said Dangol. “Why can’t young people join politics? Only a person from our generation will understand our issues.”

Shah too said that he was running to place a younger generation at the helm of Nepal’s most populous city.

“It has been painful to see people in positions of power misusing their authority,” said Shah.

“I have worked in various districts to build schools and hospitals, and in the process, have dealt with people from various backgrounds,” said Shah. “I found the post of mayor to be more suitable for me.”

Dangol emphasized her experience working with Kathmandu’s City Planning Commission where she worked with various city wards. This experience showed her that the mayor’s policies were inadequate, she said.

Electoral candidates in Nepal tend to speak in platitudes, often touting their vision for 'bikas' (development) and 'samriddhi' (prosperity). But all too often, this vision is vague and impractical, like current mayor Shakya’s promise of developing a metro rail in Kathmandu. In Kathmandu, development is equated with wide roads and tall buildings but many urban planners say that those priorities will not develop Kathmandu as much as widen the gap between the rich and poor and make the city more unlivable.

As Dangol herself has employed the tropes of 'samriddha' and 'sundar' (prosperous and beautiful) Kathmandu in her candidacy announcement, we asked her what exactly ‘development’ entailed.

“Development is a holistic approach to create an efficient lifestyle,” she said. “It cannot be limited to only one indicator of infrastructure building, but is a combination of heritage preservation and ensuring basic facilities for the present generation without exhausting resources for the future.”

While Dangol emphasized heritage protection and sustainability, there were few specifics in her reply. We posed the same question to Shah and his reply too was all rhetoric with little substance.

“Development of a city is indicated by the happiness of its people and their mental well-being,” he said. “It should create ease in people’s hectic lives.”

Do they have a manifesto?

An electoral manifesto is a succinct method of communicating to the voters what a candidate’s specific plans and policies are going to be. Most political parties come up with a manifesto before the election to go to the voters with. This allows voters to see the substance behind the rhetoric and learn more about what they can expect from candidates should they get elected.

Unfortunately, both Shah and Dangol do not have manifestos yet.

“I have yet to release my manifesto as I didn’t want it to reflect the voice of only one person,” said Dangol. “I have made an appeal to understand people’s needs so my manifesto will not only be mine but will include the vision of all individuals living in Kathmandu.”

While Dangol was more forthcoming about the need for a manifesto and said that she would be working on one, Shah instead said that he had a list of ‘agendas’. He repeatedly directed us to interviews available on the internet.

“It is not necessary for an independent candidate to have a manifesto, but I, along with my team, have prepared a list of agendas which will be provided to people upon request,” said Shah. “I have decided against distributing the manifesto to the masses and creating a mess in the streets.”

He once again insisted that we watch his interviews to understand his vision for the city.

So what exactly are their specific plans?

At Shah’s repeated prodding, we watched and listened to his interviews, specifically his two-and-a-half-hour conversation with Sanjay Silwal Gupta. Shah speaks about encouraging private electric transport while prioritizing public transport, including an underground metro rail. He talks of a ‘transport management system’ where infrastructure work on the streets will revolve around a proper schedule and flyovers and underpasses will be built to alleviate traffic. He also touches upon the need to build more parks and open spaces for people to play on, ‘walkable heritage areas’ to attract tourists, and segregate waste to better manage garbage.

These are priority areas for Shah, according to the video, but again, there’s little substance on the road map for how he will achieve his goals.

Dangol, meanwhile, says that she will focus on the ‘eight pillars of development’ – traffic management, waste management, social engineering, e-governance, youth entrepreneurship, cultural heritage, tourism, and research and development. Dangol too emphasized the need to separate waste into organic and inorganic as a prerequisite to managing the capital’s garbage problems.

“We eventually have plans to turn waste into energy,” she said, something that Shah too has mentioned.

Dangol’s priorities also include modernizing public transport through the implementation of a proper schedule and eventually, a metro and Bus Rapid Transit. Both Shah and Dangol are focused on the digitization of public service in order to reduce the burden on the public while also eliminating opportunities for corruption.

“Development needs to have a bottom-up, not top-down approach,” said Dangol. “We are focused on creating simple but impactful changes.”

Shah and Dangol both spoke about the need for more research and data to better plan policies for the city. One unique idea that Dangol expressed had to do with community homes for the poor and homeless.

“There are porters sleeping on the streets of Kalimati due to high rent in Kathmandu. This is a threat to human life,” she said. “Community homes will provide minimum wage workers with a roof over their head.”

Who will vote for them?

Both Shah and Dangol are well-known within their own circles. Shah is a rapper and has built a somewhat sizable following on the internet while Dangol is a former Miss Newa and hosts events around the Valley. She is also well-known for her activism regarding the promotion of Nepal Bhasa.

Kathmandu might be cosmopolitan in its make-up but it remains a largely Newa city and a significant portion of its voters are ethnic Newa. During the 2017 elections, there was a widespread belief that the mayors of the three cities of the Kathmandu Valley should be from the Newa community. As such, Kathmandu got Bidya Sundar Shakya, Lalitpur got Chiri Babu Maharjan, and Bhaktapur got Sunil Prajapati. The latter two have done much for their cities, winning many admirers but Shakya has earned more anger than plaudits at what many see as inefficiency, corruption, and a general lack of impact.

Dangol is an ethnic Newa so she might see more support from the community, but both appear to be counting more on demography than ethnicity. Dangol, however, insists that her voters do not just belong to the young community.

“I have worked for causes related to children and the older generation. I can relate to problems from all age groups and trust the judgment of citizens of Kathmandu to choose the right person,” said Dangol.

With both candidates of a similar age group and similar platforms, there is also a danger that they will end up splitting the youth vote, thereby benefiting a candidate from a traditional political party. For this reason, Shah is willing to have a pre-election to decide the appropriate candidate, much like how preliminary elections are held in the US to choose the presidential candidates. Dangol, however, says that the more representation of the youth there is, the better.

While it is encouraging to see young people aspiring to leadership positions, only time will tell whether all of Kathmandu is ready to be led by the youth.

A renewed beginning for Harisiddhi