Changing weather patterns, a possible consequence of climate change, have already stopped apple farming in the region and are now threatening potato production. 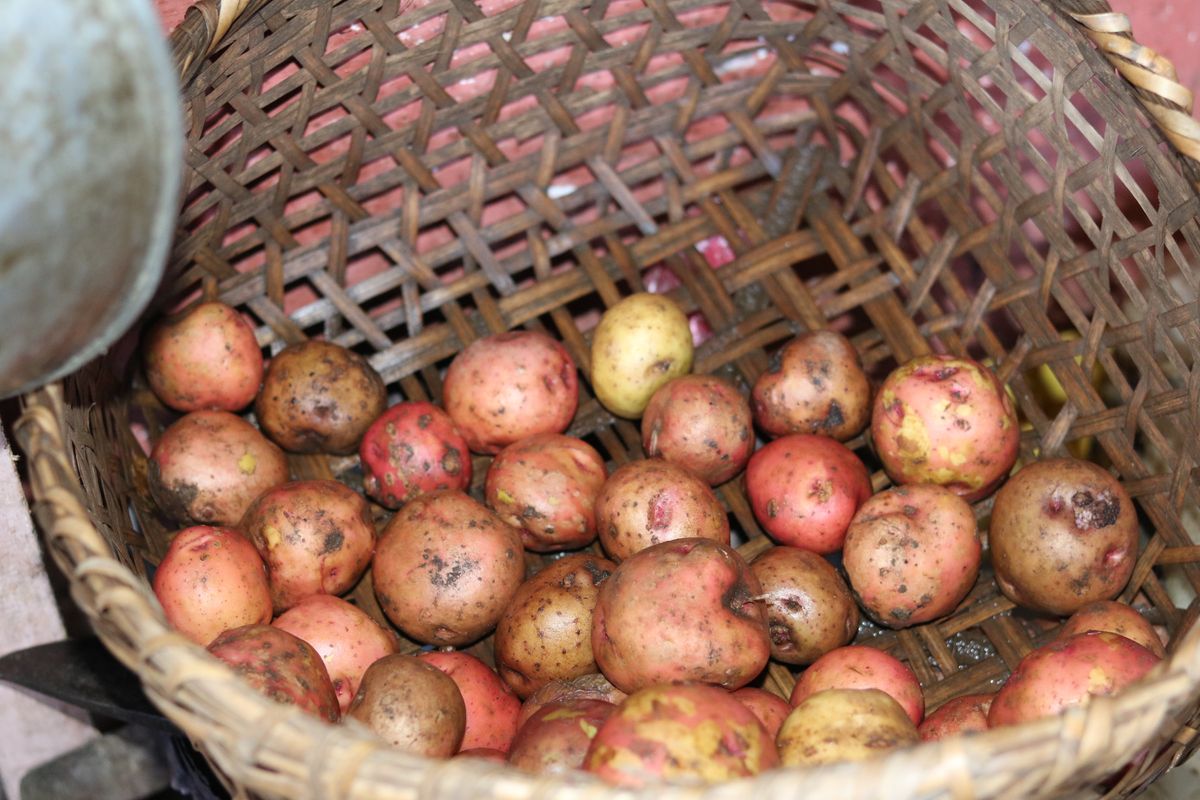 SOLUKHUMBU — The rain starts pattering just as Purna Maya Magar finishes heating up some rilduk. The kitchen fire has warmed the entire room and the smell of burning firewood and the timmur from the rilduk linger in the air. Rilduk is a traditional Sherpa dish made by mashing and pounding potatoes until they acquire a thick, chewy texture. The potatoes are then cooked into a warm, hearty stew, making it the perfect meal for chilly evenings.

“Almost every family makes rilduk here. It is the perfect dish to eat, especially in the cold. The potatoes fill you up and the thick soup and timmur keeps the body warm,” said 46-year-old Magar, a resident of Pattale, Solukhumbu.

Rilduk is not the only dish Magar makes from potatoes. She uses potatoes in almost everything she makes — meat and vegetables, even adding it into flour to make aloo roti, which she eats with ghee and chilli paste.

“No meal is complete without potatoes in these cold regions. Once winter sets in, we’ll have little else to depend on besides potatoes,” she said.

Potatoes are a staple food crop here in the village of Pattale in Solukhumbu district, much like everywhere else in the mountains of Nepal, and its importance in the diets of the locals cannot be stressed enough. The humble potato is hardy and grows easily, providing mountainous communities with a steady source of nutrition throughout the year.

But in recent years, locals like Magar have been having problems with potato production.

“Last year was a complete disaster for potatoes everywhere in Solukhumbu. Almost 90 percent of potatoes were destroyed,” she said. “Production was so low that potatoes cost around Rs 300 per kilo, almost triple the usual price. I have never seen such a bad production year ever.”

Magar attributes last year’s crop failure to a lack of rain. “It just didn’t rain,” she said. “And as most farmers depend on rainwater because we do not have irrigation facilities, things became difficult.”

The lack of rain in Solukhumbu could be part of a wider pattern of changing climatic conditions, say climate change experts. While some regions are seeing less rainfall than usual, others — as evident in the heavy rainfall across the country this past October — have received a lot more. Extreme weather events, like floods and landslides, are also becoming much more frequent.

“All of these affect agricultural productivity,” said Durga Bahadur Tiruwa, chairperson of the Solukhumbu Agriculture Knowledge Center, which operates as part of the Ministry of Agriculture. “First, productivity is being affected due to changes in temperature and precipitation level; and second, through changes in soil, distribution and frequency of infestation by pests, insects, and disease. Both of the effects are currently being witnessed in Solukhumbu.”

While the impact such changes will have on the indigenous communities living in this ecologically fragile zone and relying directly on their immediate environment for subsistence remains to be seen, it’s certain that the consequences will be grave.

“There’s no telling when the rain will fall. Last year, it didn’t rain at all in many parts of the district, like Pattale and Salleri. But this year, there’s been a lot of rain. And once it rains, it does so for weeks. When that happens, there are high chances of fungus developing in potatoes, causing the late blight disease. When that happens, in a matter of days, everything gets destroyed,” said Tiruwa.

Late blight is a potentially devastating disease which infects the leaves, steams, and fruits of plants. The disease spreads quickly and can cause total crop failure.

“This disease has always been seen in potatoes but its frequency has definitely increased in recent years and that has disrupted potato production in the district,” said Tiruwa.

A little higher up, in Phaplu, the situation is similar.

Lama is too old to work in the fields now, so her younger son and his wife tend to their potatoes. Her elder son is in Malaysia, working at a construction site. Lama herself has never left Phaplu, and has witnessed changes in the climate firsthand.

“When I was a little girl, there would be so much snow that we wouldn’t be able to step outside, not even to feed our cattle. I don’t remember the last time it snowed that much,” she said.

The further up you go in Solukhumbu, the effects of a changing climate become more and more evident, albeit in different ways. In Khari Khola, Pasang Lhamu municipality, which falls in the Khumbu region, potato production was a disaster last year, but it was not because of a drought — there was too much rain.

“Last year, the late blight disease killed all our potatoes. But this year, we have seen almost triple our annual harvest,” said 47-year-old Pema Dorjee Sherpa, who is the chair of a farmers’ committee that has over 300 farmers.

In the Khumbu region, which is the gateway to Mount Everest, almost everyone is either involved in agriculture or the tourism sector. And since the pandemic hit, for the last two years, everyone has been home working in the fields.

Pema Dorjee Sherpa too works as a mountain guide but since the COVID-19 pandemic hit, he’s been back home. His family has been farming for generations. And even though production has been good this year, Pema is still concerned.

“Nature has become unreliable now. It wasn’t like this before, we could depend on the rain that falls from the sky. Up here, irrigation is a major problem, which means if there’s too little rain or too much of it, we are in trouble,” he said.

Such instances of erratic rain and extreme weather events, like heat waves, storms and droughts, are becoming more frequent and intense over the years, threatening every aspect of human life. This reality is more stark in the Himalaya.

These changes are already impacting agriculture. Pema says that the potatoes he sees now are not the same as he saw growing up. “They are much smaller in size and the yield is not the same; the seedling size has also decreased,” he said.

In Solukhumbu, farmers plant different types of local potatoes: bhotange, naamcheli, jarre, among others. Plantation time is around November-December and the potatoes are then harvested in June. But changes in plantation season have also been witnessed over the decades in many parts of the district, according to a 2008 study that found that the potato harvesting season had shifted in Ghat (from mid-March to mid-January) and Phakding (from mid-March to mid-December). 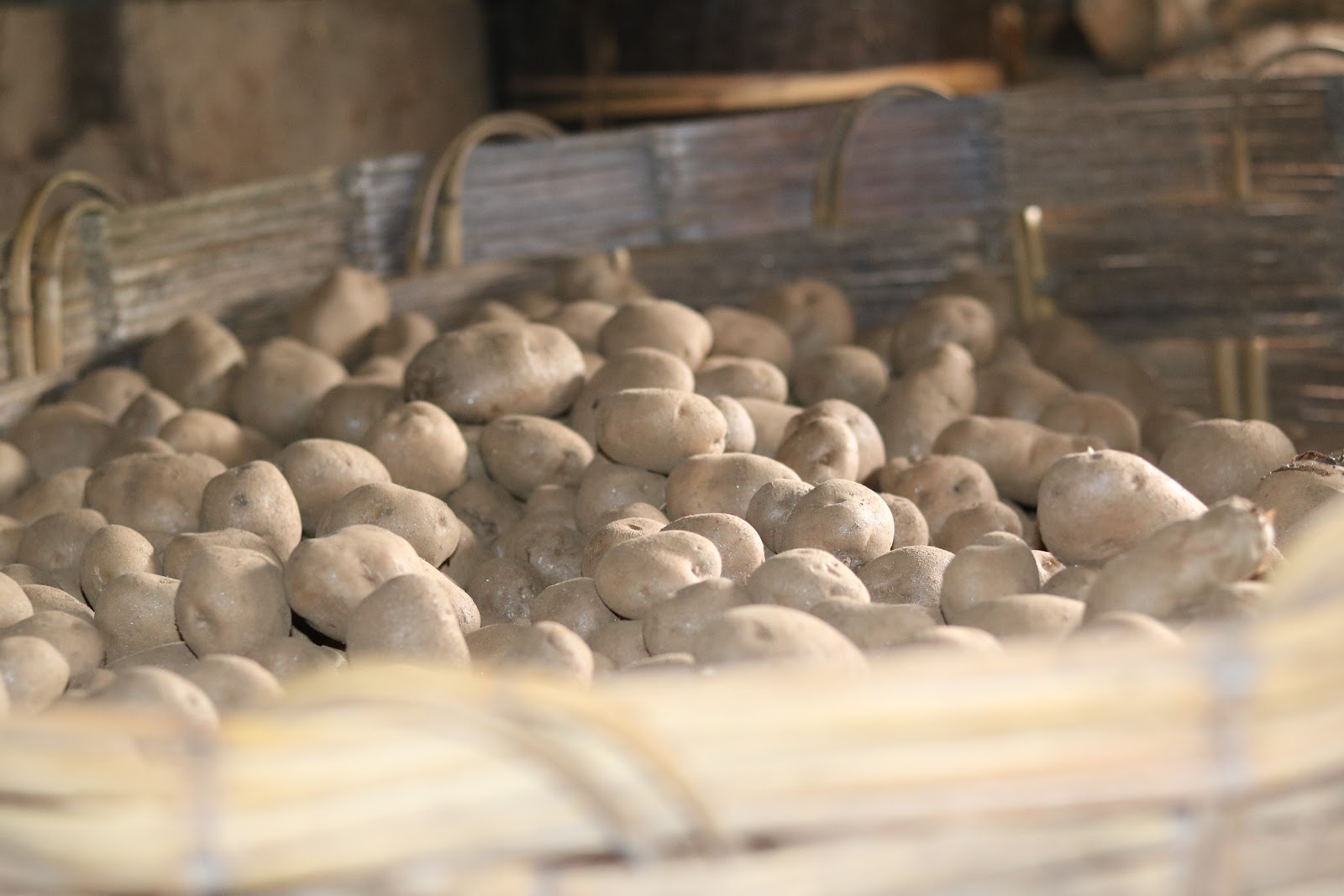 All the potatoes harvested in the lower regions of Solukhumbu district are consumed within the area or sent upwards, to Lukla and beyond, on the backs of men and mules because the roadway only reaches until a village called Jubing. It is only till Jubing that farmers cultivate other crops, besides potatoes, like millet, maize, and vegetables. The higher you go, potatoes become all the more important.

“High-altitude farming regions beyond 3,500 meters are called single-cropping zones, which means farmers can only cultivate once a year, from April to October,” said Abid Hussain, a food security economist at ICIMOD with expertise in climate change adaptation. “During this time, if there is heavy rainfall or snowfall, the sowing and harvesting will definitely be affected, which will affect crop productivity. Climate change impacts are likely to affect agricultural production, leading to further food insecurity in the region.”

Lukla, at 2,860 meters, has had poor potato production for the past two years, say locals.

“It’s been two continuous years that we’ve had poor production. Last year was really difficult for us to sustain ourselves, especially with Covid-19 putting all my three sons out of a job. This year too, things look grim for us,” said Suma Sherpa, 60, a resident of Lukla, who has nine family members to feed.

But potatoes are not the only crop that is witnessing changes owing to the climate. There’s one cash crop that has been almost eradicated in the district in recent decades — apples.

“A few decades ago, there were apple trees everywhere. Wherever you looked you’d see red apples,” said Jangbu Sherpa, 67, a resident of Garma. “Every house had a few trees. Today only a handful of them do.”

The few trees that do bear fruit do not produce good apples. “They lack color and lustre; they are small and sour,” said Jangbu. After selecting a few good apples, most families use the remaining to make alcohol.

“Climate change, particularly erratic rain, is undoubtedly responsible for the disappearance of apples in this district,” said Kiruwa of the Solukhumbu Knowledge Centre. “Decreased apple harvest resulted from reduced fruiting, early growing, and dying and drying of apple plants, which brought huge losses to the economy.”

Jangbu Sherpa too farmed apples for more than a decade before it became difficult to continue.

“I had to stop apple farming because there was too much loss,” he said.

For years he left his 18 ropanis of farmland almost barren, cutting the apple trees or just letting them rot. On some part of his land, he grew potatoes and other vegetables, enough for his family to eat. Then five years ago, he decided to start planting another cash crop — kiwi.

“One kiwi tree produces around 15-40 kgs of fruit,” said Jangbu, who has around 300 trees in his field. A kilo of kiwi sells for Rs 300-400 around Solukhumbu and Kathmandu, netting him a decent income.

But switching from one crop to another is not a sustainable adaptation tool.

“Switching to another crop or relying on one crop heavily are too dangerous, especially for a region like Solukhumbu. It will make communities vulnerable. The best way forward is to build resilient systems. That can be done by introducing new varieties of crops, ones that can thrive in marginal soil and less water,” said Hussain.

As weather patterns continue to change, the frequency of long spells of dry season, heavy rains, and pest infestations will only increase, says Hussain. The most recent report by the Intergovernmental Panel on Climate Change, released  prior to COP26, paints a bleak future for the world if governments do not take proper actions to limit emissions and arrest global warming.

But not all farmers have the option of switching to other cash crops. There are farmers like Suma Sherpa who farm subsistently and need to grow potatoes, simply because they have no alternative.

“Farmers need to know what is happening and what we can do to protect ourselves,” said Suma. “But the government does not care. Nobody does. They do not come up here to help us; they just come to ask for votes. There is no alternative to potatoes for us. What do we eat otherwise?”