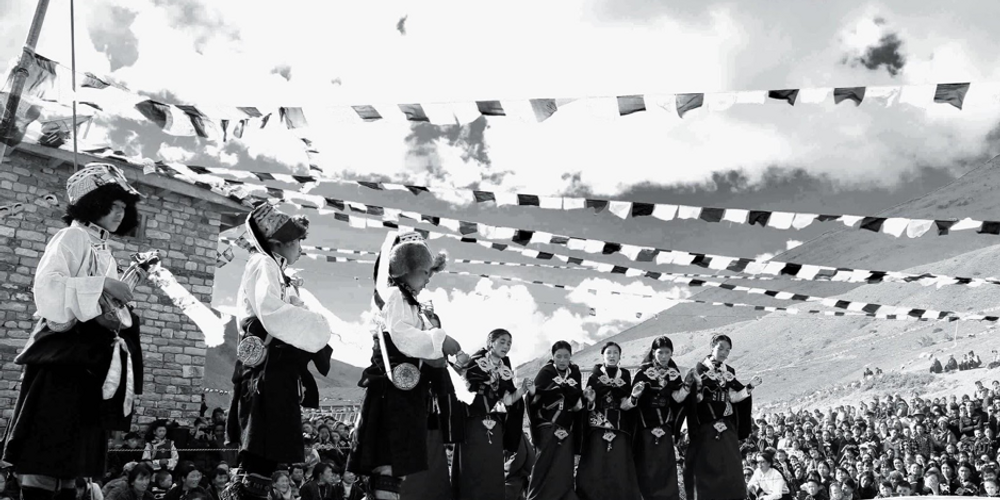 Dho Tarap valley in Dolpo, which was the site of the police violence regarding yartsagunbu management in 2014, again attracted national attention last week when locals organized a major festival from September 10 to 14 under the banner “Dolpo Festival and Crystal Mountain School Silver Jubilee Celebrations 2019.”

One of the main objectives of the festival, according to Gyalpo, the chair of the organizing committee, was to “bring high level politicians, intellectuals, development partners to Dolpo and make them aware of its rich culture and nature, as well as issues facing the community today so we can have a dialogue on what to do for its future.” Given the turnout, the festival seems to have had its desired effect.

However, recent mainstream media coverage of the festival was either limited to appealing, but shallow headlines, or what came across gratuitous criticism, unsupported by the realities on the ground in Dolpo. More than anything, the festival was simultaneously a local display of Dolpo’s culture and progress, and a political spectacle, in which predictable statements and promises were made by political leaders. It is important to weigh these seemingly contradictory purposes against each other, and to recognize that the festival reveals some of the key issues facing Dolpo today.

The event was in many ways a festival of many political statements and promises. Media representations and political discourses on Dolpo excessively emphasize aspects of Dolpo’s ‘remoteness’ and ‘underdevelopment’ alongside contradictory and romantic ideas of an ‘untouched’, ‘self-sufficient’, and ‘happy smiling’ place and people. Capitalizing on such discourses, political leaders attending the festival have made a number of statements regarding road construction, settlement planning, school, and other infrastructure development. Among them, Deputy Prime Minister and Minister of Defense Ishwor Pokhrel’s bold assertion stands out, not least because it is the first of its kind from a high ranking state official. “We will construct the Marim-Tinje-Dho-Dunai road, open Marim border, develop Dho as a Himalayan city and build adequate infrastructure for tourism development,” he said.

Other political leaders repeated the spirit of this statement, which in turn follows almost verbatim the list of demands submitted by local residents. Of course, all of these ambitious projects are easier said than done. Among other issues, the construction of a motorable road along this route would require overcoming major geological, financial and technical challenges. Two excavators reached Dho this summer after nearly ten years of constructing a dirt road on  relatively easy, gentle terrain over the short distance between Maryum la and Dho. Given this slow pace of road building, the construction of a dirt road between Dho and Dunai, which goes through narrow river valleys and countless rocky cliffs, is certainly a long shot. Moreover, the Maryum border is not even on official list of nine border transit points between Nepal and China. These geological, financial, and geopolitical realities reveal the shallowness of such sweeping statements and the failed promises of infrastructure development more generally in Karnali. Rather than debating whether such projects are feasible or not, it might be more pertinent to ask what sorts of political work such statements do, or who might benefit from them.

This takes us to the nexus between political leaders and contractors, who are often one and the same in Nepal. In Dolpo, certain members of the erstwhile Communist Party of Nepal-Unified Marxist Leninist (UML) party, now the ruling Nepal Communist Party (NCP), have enjoyed almost exclusive control over not just Dolpa’s electoral politics but also development projects such as road building over the past few decades. The Maryum-la road construction project, which has been ongoing for almost a decade now, is one of many development projects carried out by members of the same political party. It is thus not surprising that the festival was attended by leaders affiliated to the ruling NCP, and that it is some regional members of the same party who have been making similar promises to locals for a while now.

What was new during the festival, however, was the involvement of high-ranking state officials and political party members like Ishwor Pokhrel and Janardhan Sharma. Organizers think this might change the game a bit. Sharma, who allocated the budget for the Maryum-la road project during his tenure as Home Minister, even told organizers that he would raise the issue of opening the border point when Chinese President Xi Jinping visits Nepal in October.

As a community member, I doubt whether such statements and promises will ever deliver, and if so, to what extent. There is substantial precedent for such promises only benefiting a few political leaders and contractors by prolonging their lucrative road construction projects while simultaneously enabling them to win electoral politics.

However, the festival organizers that I talked to made it clear that they are not fools; they do not blindly believe in such statements. Rather, they take the festival as a strategic move to get the attention of senior state officials, and hold them accountable for the state’s negligence towards Dolpo. Implicitly, by putting together the festival despite several challenges, the local community has made a statement.

The festival highlighted local achievements, hard-won, despite state negligence. Although framed as a Dolpo Festival, the event was primarily organized by Crystal Mountain School alumni to commemorate its 25th anniversary. CMS is one of the most successful government schools in Dolpo, run with support from Action Dolpo. The school, the first functional one in the upper regions of Dolpo, has achieved remarkable success in the fields of education and healthcare in Dho Tarap valley.

According to statistics published in the festival flyer, “In its 25-years history, 70 students have completed School Leaving Certificate (SLC), 50 have completed or are doing +2, 10 Nursing, 5 Health Assistants(HA), 9 Bachelor of Arts (BA), 1 Bachelor of Law (LLB), 2 Masters of Arts (MA).” The school attracted students from different parts of upper Dolpo in its early years, and became a model for other schools in the region that followed. The success of the school is in large part due to the sustained support of Action Dolpo, a small and humble organization that has remained committed to Dho Tarap since its establishment in 1994. Today, its alumni don’t just run the school, but also work elsewhere in Dolpo as nurses, health assistants, teachers, and local leaders. It is therefore not a coincidence that the Silver Jubilee of a local school turned into a major regional festival. The point of telling the story of a rather small school here is that the organizers think it strategically served the work of showing to the state Dolpo’s progress in education.

Indeed, some of the organizers I talked to, alumni of CMS, claim that one of the achievements of the festival was both showing and shaming the state with regard to how far Dolpopas have and can come, despite relative state neglect in matters of basic healthcare, education, infrastructure development, not to mention political representation and exclusion. According to Tsering Wangmo, a nurse and CMS alumna, state officials and many folks from outside Dolpo were apparently surprised to find English- and Nepali-speaking youths among the Dolpopas. They expressed shame, seeing the achievements of a foreign NGO and acknowledged that it should have been the responsibility of the Nepali state to provide basic services like education and healthcare in the first place. “Overall,” Wangmo adds, “we managed to show them a lot of our culture and capabilities while at the same time highlighting our challenges and state negligence.” Gyalpo agrees. “We were able to show our achievements despite the state’s neglect. The state acknowledged that and promised to commit more in future. We will see how that goes.”

I mentioned earlier that the festival served as an arena for two contradictory purposes and that these should be understood in conjunction with each other. The organizers and locals of Dho Tarap Dolpo, by putting together the festival and inviting high-ranking state officials, not only drew state attention to its neglect of the challenges facing Dolpo but also, by celebrating the 25th year anniversary of a successful school, made a strong statement about their progress, and their rich history and culture. The festival thus simultaneously highlighted some of the issues facing Dolpo, including the need for  government attention to education and healthcare and frustrations with promises of road building, while directly challenging popular images of Dolpo as remote and underdeveloped.

Hopefully, the festival can also serve to open up dialogue between locals and the state on other issues including community-based management of yartsagunbu and better redistribution of revenues that the state collects from thousands of yartsagunbu harvesters and tourists.

By opening up traditional art forms to women and other castes, young musicians are making certain musical heritage like the dapha, believed to be the oldest form of bhajan in Nepal, will live on.