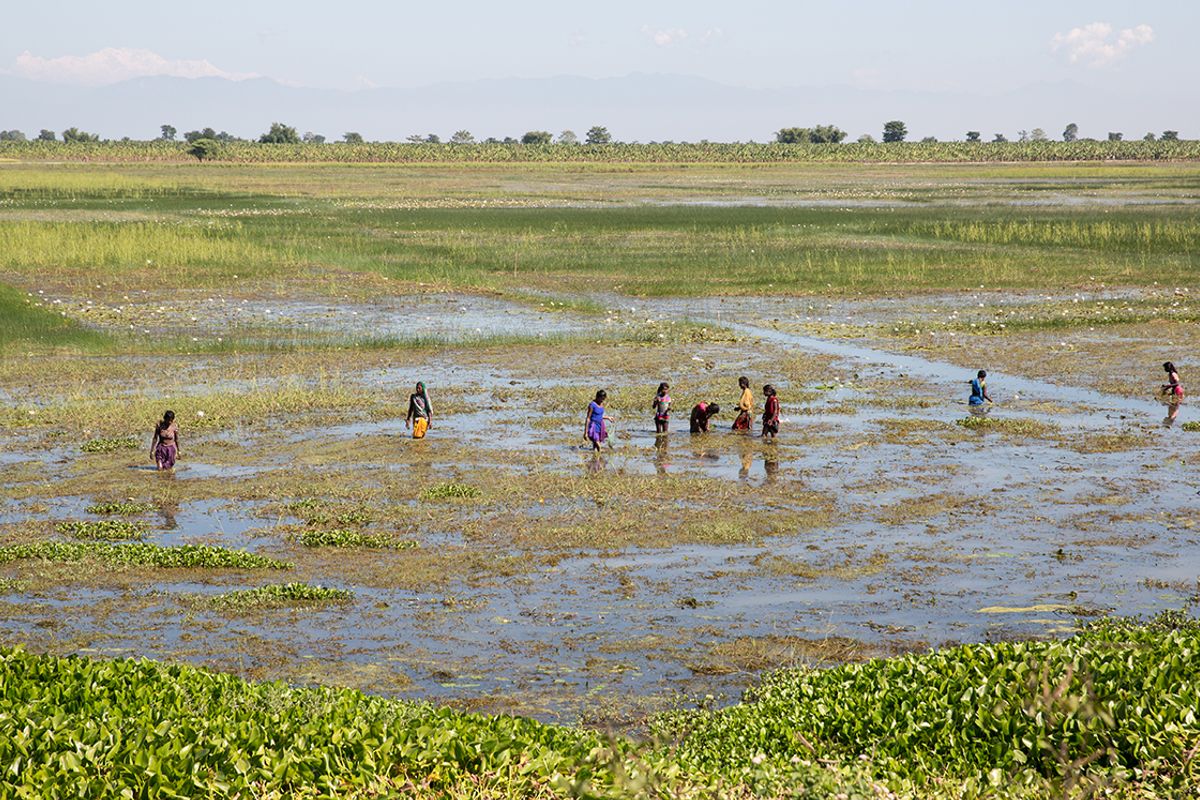 Prem Raj Ghale runs a popular hole-in-the-wall tea shop on the outer edges of Pokhara’s Lakeside. After many years of reluctance, his family moved to the city in 2017 from their ancestral village just north of Ghandruk in the Annapurna region’s Kaski district. Their move was prompted by two mutually reinforcing factors – increasing unpredictability in agricultural output and food insecurity.

“I must admit, I do miss home. And when I don’t, my kids are sure to remind me by telling me how much they miss home. I think about it every day. But I suppose this is our home now,” says the 42-year-old.

Ghale worked in agriculture for most of his life. He formed a productive community farm collective with members of other local families in his village. Together, they grew a variety of seasonal crops and produce for themselves and the market. Most farming practices they employed were considered foolproof systems, passed down by their families for generations. Unfortunately, the reliability of these processes began coming to question around 15 years ago, Ghale recalls.

“It became difficult to predict when and how much it would rain,” he says.

Ghale’s recollection of a structural shift in rainfall patterns in the mid-2000s is consistent with academic literature on the topic. A comprehensive 2010 study of changes in the Himalayan rainfall network found that the distribution of extreme one-day rainfall events increased considerably each decade since the 1950s. A sudden decrease in frequency, however, was observed in the period between 2000-2007, causing prolonged dry seasons with occasional bursts of extreme rainfall and floods.

Every year since 2000, families in and around Ghale’s hometown have abandoned their homes to move southward in search of jobs. By 2017, his family was among the last of the holdouts still running their community farm. Most crops had grown stubby and dehydrated due to the dry weather. Then came the 2017 monsoon floods that were felt across South Asia. Although most of the deluges’ impacts were felt in Nepal’s southern plains, the heavy rains threw off water-cycle balances, causing erratic rainfall across the Himalayan region as well. Given the lack of food reserves in the village and the low likelihood of the land recovering for the next season’s harvest, the Ghales packed their belongings and headed to Pokhara.

The Ghales are among thousands of Nepal’s climate change migrants. There will likely be thousands more in the years to come.

In a recent study, researchers from the Indian Institute of Technology Bombay (IITB) and India’s National Institute of Hydrology posited that extreme rainfall events in the Sutlej river basin in Uttarakhand have more than doubled since the 1990s. Other transnational studies of the Himalayan region have also supported this estimation.

A comprehensive study of Himalayan territories in China, Nepal, and Bhutan concluded that rising temperatures have dramatically accelerated glacial melt. The analysis found that glaciers have lost the equivalent of over a foot-and-a-half of vertical ice each year since 2000, at double the melting rate observed between 1975 and 2000. Nepal’s growing climate migration challenge was spotlighted in an article in The New York Times chronicling a southward exodus from the high-altitude village of Dhye in the Mustang region. There is also evidence of mosquitoes uncharacteristically appearing in the Himalayan highlands due to the rising temperature, which scientists have speculated could lead to outbreaks of malaria and dengue.

These are just a small assortment of reasons why the effects of anthropogenic climate change may prompt internal and international out-migration in Nepal. Millions of people have been either displaced or forced to migrate by the crisis’s environmental impacts. South Asia is at the forefront. A 2020 analysis by the Institute for Economics and Peace (IEP) posited a staggering estimate of 1.2 billion people in 31 countries, Bangladesh being the most vulnerable, being insufficiently resilient to withstand likely ecological threats. Another sobering report by the Asian Development Bank estimates that climate change will force mass migration of around a billion people by 2100.

There is currently no official record of climate change migration volumes or trends in Nepal. However, a few noteworthy studies suggest the seriousness of the issue and the intrinsic complexity in studying and addressing it at the policy level. A 2017 study of residents of Humla district found that the root causes of seasonal migration were structural poverty and social inequities as opposed to the environmental impacts of climate change, which open the doors to further analysis from a lens of climate justice. Another 2011 study found that instances of long-distance migration were best predicted by falling agricultural productivity, declining land cover, and increasing firewood gathering time. The analysis also found that the observed effects varied by gender and ethnicity, with men and high-caste Hindus generally being less affected than others.

Kathmandu based think-tank Centre for Social Change (CSC) recently completed an accelerated study of the mechanisms at the nexus of climate change and migration in Nepal. The inquiry, where I served on the research committee, found that climate change effects are generally linked with migration trends in two commonly hypothesized pathways: through displacement caused by extreme weather events and through forced migration caused by low agricultural output, food insecurity, and/or water scarcity. Further, the ways in which these links manifest among communities within the same geographical areas are unknown. Climate change effects are experienced disproportionately by historically marginalized groups across social dimensions such as gender, ethnicity, caste, landlessness, economic standing, and access to education – all are also very likely to play key roles in determining an individual’s ability to migrate.

“A big takeaway for us was the realization of how understudied the links between climate change and migration are,” shared CSC executive director Prakash Bhattarai. “Climate change and migration are both very important and relevant areas of research in the country, yet little is known about how they interact. This is an exciting and potentially groundbreaking frontier for future research in Nepal.”

Four takeaways from the latest UN Climate Report for Nepal

The latest volume of the IPCC’s Sixth Assessment Report focuses on climate change impacts on people and places, with urgent lessons takeaways for Nepal.