The power of impeachment is an extraordinary power enshrined in the Constitution to reaffirm the democratic idea that no one is above the law. In Nepal, however, this power is exploited whimsically. 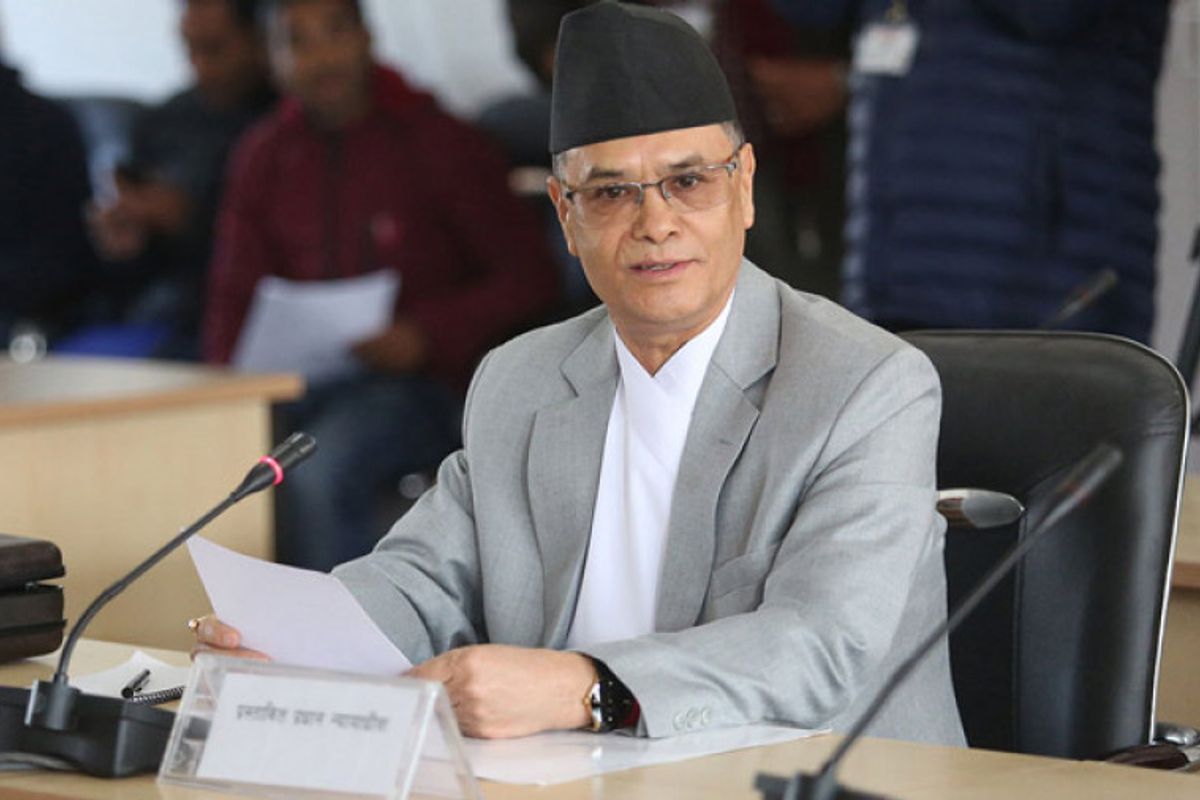 On February 14, the governing coalition led by Sher Bahadur Deuba, in a swift and secret operation, registered an impeachment motion against the embattled Chief Justice Cholendra Shumsher Rana, in the midst of parties conflicting on ratifying the Millennium Corporation Challenge.

As a result of the motion, Rana is currently suspended from his duties. For him to be impeached, the motion needs to be endorsed by the lower house. What will happen now is up to the lower house, and until it makes a decision, doubts on whether the whole event is mere political manoeuvring to fulfil partisan interests or an actual attempt to reprimand misconducts and gross violation of constitutional duties remain.

However, in the midst of these political developments and lack of broader political consensus on impeachment, the Supreme Court has been stuck in a limbo for months, pushing Nepal on the verge of a constitutional crisis.

The law on impeachment is stated in Article 101 of the Constitution of Nepal. Article 101(2) specifically deals with the impeachment of the Chief Justice, other judges of the Supreme Court, members of the Judicial Council and other officials of constitutional bodies, including chiefs, and allows for their removal on the grounds of serious violation of the Constitution and law, incompetency, misconduct, failure to discharge duties honestly, or on the grounds of serious violation of Code of Conduct. Importantly, the impeachment motion can be brought by one-fourth of the House of Representative, the lower house of parliament.

Once the impeachment motion is registered, the person charged would be suspended from performing duties until settlement of the motion [Article 101(6)]. Thereafter the motion then will be taken up in the lower house and subsequently, an 11-member impeachment recommendation committee (IRC) will inquire whether a motion of impeachment [Article 101 (3) and 101(4)] can be rolled out. As per the parliamentary procedure, Rule 163, the impeachment committee shall submit its recommendation within three months since the start of its work and must provide a reasonable opportunity to the person charged to defend himself/herself.

However, for the impeachment motion to pass it must garner the support of at least two-thirds of the total membership of the lower house [Article 101(2)].

Given the threshold for approving a motion, it is not surprising that no judge has ever been removed through impeachment in Nepal. However, in a short span of five years since the enactment of the new constitution, two Chief Justices have faced the impeachment motion. Before Rana, it was former Chief Justice Sushila Karki in 2017 who became the first Supreme Court Chief Justice to have an impeachment motion registered against her.

During the Sushila Karki impeachment saga, the impeachment motion was brought by the ruling coalition because of their differences in appointing the head of police during the crucial time of election. Karki had led the bench that decided against the then Cabinet’s decision of appointing Jay Bahadur Chand as Inspector General of Police (IGP), as he did not meet the criteria set by Nepal Police Regulation Rule 41. DIG Nawaraj Silwal and Prakash Aryal, were first and second in line for the promotion based on seniority but Chand was appointed due to partisan interests.

Later, the government appointed Prakash Aryal to the post of IGP which was again challenged. Anticipating unfavourable decisions by the court, the ruling coalition had brought the impeachment motion against Karki.

Though the government backtracked and withdrew the impeachment motion against Karki, it achieved what it had set out to do: (a) it prevented Karki, who returned to work, from hearing any case till retirement; (b) the judiciary continued to defer DIG Silwal’s case, thus allowing the government’s appointed chief law enforcement officer to hold office during the crucial time of elections.

But unlike former Chief Justice Karki, Chief Justice Rana is infamous. His integrity, conduct and sincerity towards his duties have been questioned time and again, and with civil society and the lawyer association against Rana, the public opinion towards the impeachment motion is not hostile, unlike how it was during Karki’s time. However, the political motives for bringing the motion at a junction when the local-level election date has been declared cannot be discounted.

Given Rana’s refusal to resign from his post and other fellow judges of the Supreme Court rebuffing to share the bench with Rana, the constitutional bench of the Supreme Court had been in a dysfunctional state. As a consequence, the unilateral appointment to constitutional bodies under PM Oli through an ordinance has been pending in court. A favourable outcome in the case opens the possibility of not having Oli’s chosen personnel heading Constitutional bodies during the crucial election time. Secondly, due to no willingness of other members to share or have meetings with Rana, the Judicial Council and Judicial service Commission has become paralysed.

Furthermore, it was also reported that the impeachment was a part of the political deal among the ruling coalition paving the way for tabling the Millennium Challenge Corporation (MCC) compact, an American aid program, in the parliament.

The main opposition party, the Communist Party of Nepal - United Marxist Leninist (CPN-UML), has not yet taken any step in response to Deuba’s government registering the impeachment motion. But the party’s lawmakers have submitted a list of signatures to their party leadership so it can be used to bring ‘counter action’ at ‘appropriate time’, suggesting they could bring impeachment motion against four other chief justices. UML's threat of counter-impeachment should be seen as the sword kept at the neck of interim CJ and other officials from carrying out their duties unfettered.

The power of impeachment is an extraordinary power enshrined in the Constitution to prevent the corrupt exercise of power and to reaffirm the democratic idea that no person is above the law. Such a power is not to be used this frequently, for the liberal use of such power can ​in fact ​destabilize the constitutional order.

But in Nepal, over the years, the tool of impeachment in Nepal has developed its own standard operating template, where the impeachment motion is brought against those judges or officials of constitutional bodies who do not follow the party line (or those who have been a headache for top party leaders). After a person is charged, they are automatically suspended from discharging their duties pending the settlement of such a proceeding, while the government fulfils their imminent political need disregarding the larger implication for the nation and democracy in the long run.

In this case, the house Speaker’s recent decision to form an 11-member IRC and UML's decision to send its four parliamentarians to the committee is a welcome development. Even so, suspicions of ulterior partisan motives have been reaffirmed.

Though the political climate, parliamentary arithmetics and context in which the impeachment motion was brought cannot be discounted, the charge against CJ Rana deserves to be investigated on its merit. The issue raised against the Chief Justice is of such a nature that has shaken the trust and faith of the people in the judiciary; therefore, to uphold the constitution and public accountability, bringing the impeachment motion is the right democratic path than forcing resignation, which would have been merely a stop-gap measure to a larger problem.

On the issue of counter-impeachment, it is unlikely that UML would want to ​develop ​acrimonious relations with the judiciary, which is a part of the permanent State; henceforth it is more likely to keep counter-impeachment against other judges of the Supreme Court as mere threat.

​​However, from the UML’s political perspective, bringing an impeachment motion against Speaker Agni Prasad Sapkota makes more sense, as it would achieve two objectives with one move: ​firstly, it would save them face for their ongoing obstruction of Parliament proceedings, which has gained negative publicity ​over time; and secondly, ​by bring​ing in an impeachment ​motion ​against speaker Sapkota, who comes from Maoist background, Oli can corner Prachanda, leader of the Maoist Centre and Oli’s friend-turned-foe.

Either way, even if impeachment motions are registered or not, the developing political scenario reflects that the state of ​the nation is not stable. And it is safe to expect the voting preference of parliamentarians on the impeachment motion will not depend on the veracity of the allegation/charge made against Chief Justice Rana, but based on the political strategy of the parties going into the election year.

Realigning justice with the judiciary

The current controversy surrounding the chief justice reflects a broader problem with the judiciary, which is in urgent need of reform.