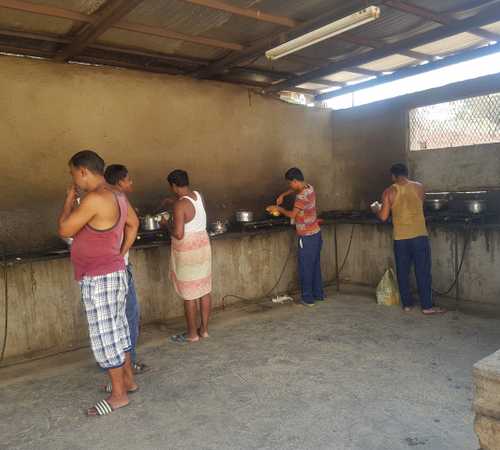 How will we remember 2020? The Record is republishing stories from a curated series of visual stories commissioned by photo.circle that presents the work of visual storytellers based across Nepal who began documenting their communities since the early days of the Covid-19 pandemic.

It is September 2020 and Raju Murmu is living in a room in Jeddah shared with 13 other Nepalis. The 14 of them have pooled their money together and purchased an internet package to ensure that they are able to reach their families back in Nepal and also to alert the authorities to their plight under lockdown in Saudi Arabia. But the package is running out and they can’t afford to buy another one. Murmu is the only one who knows how to use the internet.

“We want them to see the conditions we’re living in. Where are the concerned authorities? We want them to rescue us,” the 31-year-old Murmu says via a video call.

Murmu has been stuck in Jeddah since December 2019, when the coronavirus behind COVID-19 first began to make the news around the world. After he lost his job as a cleaner at the airport, he tried to find another one in the city, but he was not allowed to work.

When the Nepal government announced that international flights would resume in August 2020, he asked his family in Nepal to send him Rs. 50,000. He ended up paying Rs 84,000 for a ticket home and Rs 7,000 for a Polymerase Chain Reaction (PCR) test. But Nepal reversed its decision and announced that flights would remain suspended until September 2. Murmu has managed to get a ticket home for September 12, but he does not have the money for another PCR test.

“The PCR tests are only valid for a week. If I can’t get on that flight, I will have to take another test,” he says. “But where will I find the money to get tested again and again?”

Murmu and his group of 13 Nepalis are running out of food and water. The company that they work for has already given them notice to vacate. Murmu is looking forward to going home but he can’t help worrying about the friends he will leave behind.

“I am afraid my friends will rot here,” he says.

Pandav Chamar is one of the 13 who share their room with Murmu. He’s taken a PCR test and is waiting for international flights to Nepal to resume.

“We worry that we will be arrested by the police as many are living here on expired visas,” says 40-year-old Chamar.

The company has given them seven days' notice to vacate the room they are living in. They are running out of cooking gas, food, and drinking water.

“The government has earned so much money through remittance. How can they neglect us in times like these when we are in such a dire need of a rescue?” he says.

Narendra Prasad Chaudhary and Ramnepal Thakur want to go home too but the company they work for has refused to return their passports. Chaudhary was asked to pay Rs 187,000 and Thakur Rs 125,000 to get passports back.

“How can we pay such a huge amount? We have been unemployed for the past six months. Having worked for 12 years, I should have received a bonus but instead, I have to give them money while also putting together more money to go home,” says 48-year-old Chaudhary.

Narendra Sarwariya and Mahendra Hemran are in the same boat as Chaudhary and Thakur. They worked as cleaners before being let go by their companies six months ago. But unlike Murmu, Sarwariya and Hemran’s family cannot afford to send them any money as they are struggling themselves.

"If the government does not rescue us, we will die here,” says 30-year-old Sarwariya. “If we are to die then we want to die in Nepal. Please rescue us.”

⁣This story was produced for the Nepal Photo Project with support from the photo.circle 2020 grant.

Nitu Ghale  Nitu Ghale is a journalist with a Masters degree in mass⁣ communication and journalism.