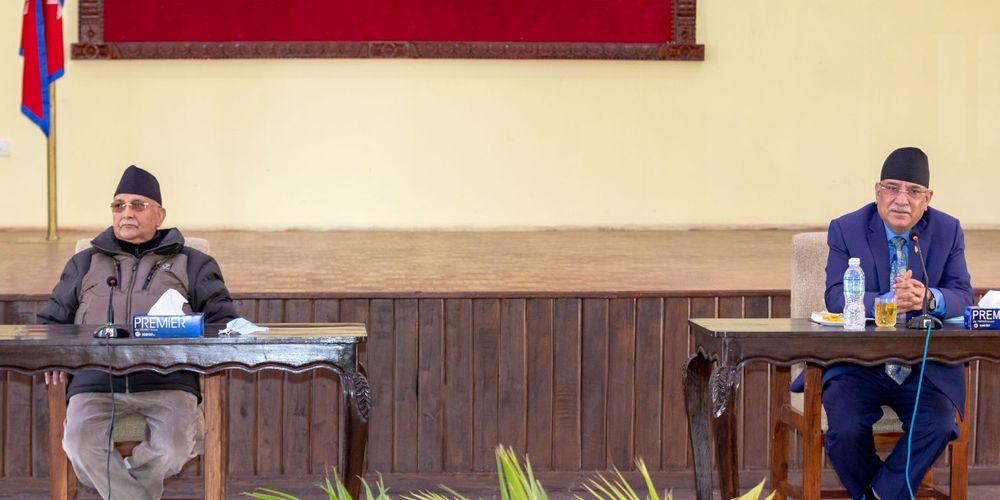 The ruling Nepal Communist Party (NCP)’s factional feud has reached a boiling point. On Saturday, NCP chairman KP Sharma Oli, who also leads one of the strongest governments in Nepal’s parliamentary history, said he was ready to issue marching orders to the party’s other executive chairman, Pushpa Kamal Dahal ‘Prachanda’, if he had any issue with Oli.

Oli’s counter proposal was tabled at the party’s Secretariat meeting ten days after Dahal tabled a political report with the party, accusing Oli of failing to lead the government, indulging in corruption scandals, and not respecting the spirit of party unification, among others.

Oli, in his 38-page document, has detailed Dahal’s checkered past and acts of fraud to stay in power and the betrayals and factionalism in the party. His proposal raises a host of issues, ranging from the dissolution of the first Constituent Assembly to election fraud, for which Dahal can be implicated. Oli has spent much time bringing up past issues to show Dahal as the bad guy. One of the explosive cases is  the issue of delaying transitional justice—Oli indirectly threatened Dahal that he could bring up issues from the conflict period.

Given the growing factional feud and mud slinging, the two leaders now have only two options: split the party, or reconcile again and forge ahead together for the time being. Many believe the party is on the verge of a split, although both leaders seem reluctant to take things too far. In case the party splits, the breakaway faction will have to justify the move or unseat Oli from power by joining hands with the main opposition, Nepali Congress, and the Madhes-based parties to prove Oli failed at state governance.

At this point, forming a new government would not be easy for any political coalition. The main opposition party has steadfastly refused to be part of the communist government for at least two years, citing the last poll’s mandates. It will thus not be easy to form a new government by sidelining Oli. Still, a majority of leaders want to keep the NCP intact until the next election, fulfil the promises made during the polls, and retain power next time too.

But the latest developments show the ongoing inflighting will not end anytime soon. The fight seems to be fueled more by the leaders’ aims to capture resources by abusing state power and bolstering their fronts—so as to command leverage for the upcoming party’s general convention and the next general election.

There are a host of problems the leaders will have to resolve. Arguing that it’s the prime minister’s prerogative to make key appointments and reshuffle the Cabinet, Oli hasn’t been listening to Dahal’s concerns when making key appointments, although Oli had made commitments in recent party meetings that he would consult with the party before making key decisions. And Oli’s monopoly in government has hurt the sentiments of other leaders—Dahal, Madhav Kumar Nepal, Jhala Nath Khanal, and Bam Dev Gautam.

For the party’s top leaders, handing out appointments ensures avenues for bringing in money, which in turn helps to bolster their faction and mobilize party cadres. But Oli has frozen out rival leaders in the party, a move that has continued to vex them.

The top leaders—who are divided into two camps (“former Maoists” and “former UML”)—want to have a hold over the resources: to have the influence on all fronts. The cracks of fissure in the current party fall along earlier partylines—of the two different communist parties that Oli and Dahal used to head, both of which had a history of armed struggle before their joining parliamentary politics. Dahal, who led a decade-long Maoist insurgency against the state, was the head of the UCPN (Maoist), whereas Oli was the leader of the Communist Party of Nepal (Unified Marxist Leninist) before they forged an electoral alliance against the then governing Nepali Congress in 2017.

Dahal’s party was also a key coalition partner of the Sher Bahadur Deuba-led government even as Dahal began forging an electoral alliance with the Oli-led party. Dahal and Oli’s dramatic move to forge an electoral alliance helped the NCP to win the most electoral seats— at all levels of government. The party won nearly two-thirds of the votes for seats in parliament, formed provincial governments in six provinces (out of the total of seven), and won most local-government elections as well.

In those polls, leaders from Oli’s UML party had bagged the most seats at all levels of government. But Dahal would not allow Oli to lead the government unless he agreed to also allow Dahal to head the government—on a rotational basis—for the five-year government term. The agreement, however, was not disclosed to the public until Oli had completed two years in power.

All these problems have thus led the party to its current impasse. In a bid to resolve the dispute, a section of negotiators in the party have proposed that the party confine Oli to the government and allow Dahal to solely lead the party. But during Saturday’s meeting, Oli ruled out such a possibility. Instead, he challenged Dahal or any other leader to compete against him in the upcoming election and to defeat him if they wanted to lead the party.

Things will be clearer only once Dahal responds to Oli's recent counter attack. Another Secretariat meeting has been scheduled for Dec 1, and a politburo meeting has been scheduled for December 3. In all likelihood, Dahal will not come out with a strategy soon—at least until Chinese State Councillor and Defense Minister Wei Fenghe, who is arriving on Sunday, returns home.

The party’s spokesperson, Narayan Kaji Shrestha, has said that he still holds out hope that discussions in the party will settle the row, but ironing out the growing differences is not going to be easy. Oli’s hardline stance has many party leaders, mainly Dahal, facing a hamletian dilemma: to reconcile or fight.

Will Dahal continue the party infighting, or will he completely sever ties with Oli? The smoke will need some time to clear.

Since the ongoing power struggle is driven by the leaders’ seeking to capture the party’s command after the upcoming general convention, Dahal will formulate his new strategy only after reading the minds of other top leaders, mainly Nepal, Khanal, and Gautam. Their positions on party matters will probably determine his political course: fight to the finish or reconcile and remain in the party.