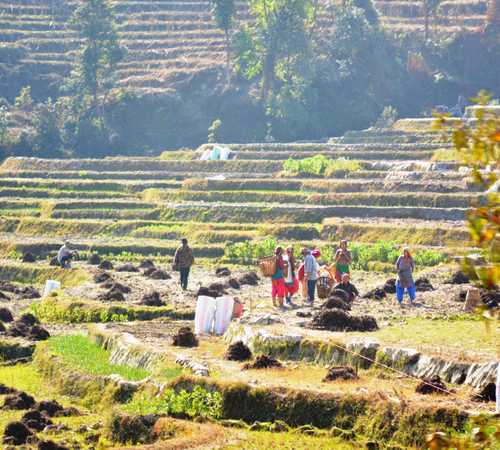 The farmers’ protest in India began in November 2020 and shows no signs of slowing. It looks like Indian farmers have taken to this protest with agendas that are close to their heart, and so it will probably drag on.

The farmers in India are protesting new policies that the Indian government wants to establish in the name of ‘surplus food management’, giving a larger role to the market and corporate agri-business to increase private investment in production and marketing. Farmers do not seem convinced that these new policies will guarantee minimum prices and purchases if they are unable to sell at higher prices to private business groups.

The government’s push to increase contract farming and place farmers in direct contact with agri-business companies is seen as a threat by farmers, as they could lose their land and livelihoods. The corporate agri-business could invest in their land, hoard food grains to temper the price, and force farmers to sell produce at distressed prices. Farmers would be encouraged to grow produce that are required in distant markets with no use value to them, and when prices drop down (which is also done artificially by the corporate sector by generating competition), there is no market for the products. In such cases, farmers would not be able to pay their debts, leading to them losing their land and then their lives. Because of similar issues, there has been a spate of farmers’ suicides in India.

As the agricultural sectors in India and Nepal are entangled – thanks to the open border, largely free trade and Nepal’s dependence on the Indian food market – this protest, whether it succeeds or fails, has implications for Nepal. The genesis of this protest also has lessons for Nepal’s policymakers, especially how corporate interest in the agricultural sector led to the protests in the first place.

In the time that India turned itself from a country dependent on food imports into a country with a food surplus, Nepal went the opposite route -- going from net food exporter to net food importer. In fact, food imports in Nepal have increased exponentially in recent decades while exports have remained stable. The situation that Nepal is facing now in terms of food imports and food aid is what India faced until the 1960s. The humiliations that Indian leaders faced while agreeing to harsh preconditions before receiving food aid led them to try and develop the agriculture sector to become self-sufficient.

They succeeded, and from the late 1970s onwards, India became a food surplus country, now facing a problem of managing the surplus. Government support for farmers in the form of subsidies and guaranteed purchases with minimum support prices played crucial roles in helping farmers produce more. The present protest is a result of the government’s initiative to hand over surplus food management to the private sector. Farmers believe that the introduction of private interests will only lead to insecurity and the possibility of becoming a pawn of corporate power, fearing that they could lose both their land and livelihood.

Nepal, too, had a food surplus in the 1960s, but slowly, it was unable to keep up with the population growth rate. By the late 80s, population had outpaced food production. Food imports have been growing since then, but since the mid-2010s, it has grown exponentially. In 2007-08, Nepal’s trade deficit in food products was Rs 11 billion, which increased to Rs 173 billion in 2018-19 – 16 times in about a decade, according to the 2019-20 Economic Survey.

Nepal is even dependent on other countries, primarily India, for basic commodities like cereals -- rice, maize, and wheat -- and pulses. In 2018-19, Nepal imported about 14 million metric tons of cereals and exported almost none. While there was some export of prepared wheat-based food, this was most likely made from imported wheat and wheat flour.

Nepal started importing cereals only about a decade ago, but its dependence on other countries has become substantial. In the fiscal year 2018-19, Nepal spent Rs 220 billion on food imports, out of which Rs 51.80 billion alone was spent in importing cereals -- rice Rs 24.59 billion, maize Rs 12.55 billion, and paddy Rs 6.84 billion. Even in this regard, Nepal is completely dependent on India; in 2017, it imported about 65 percent of its food products from India and exported more than 80 percent of its food products to India. Even though Nepal has been able to diversify its sources of import in recent years, its export remains mainly to India. Nepal’s agricultural sector has worsened so much that Nepal has adopted ‘food sovereignty’ as its major policy, which aims at making the country self-sufficient in food production while empowering farmers and safeguarding their livelihoods and interests.

The policies that India implemented, especially the minimum support price, to turn the country from a food deficit to a food surplus country are now being questioned by the Indian government. But these policies can help us understand why Nepal failed to increase its own production.

The minimum support price in India helped farmers secure higher prices for their produce if sold at various government mandis (agricultural markets). Various other policies also allowed them to obtain subsidies in fertilizers and other inputs. This helped farmers secure a market for their produce and led to India becoming the largest rice exporting country, with about 10 percent of its rice production sold in the overseas market. Overall food production too grew at well over 3 percent per annum – much higher than population growth rate with India having excess stocks of rice and wheat for many years in a row. Recently, a huge surplus of sugar has also accumulated.

Naturally, farmers benefitted and this encouraged them to produce more through the use of improved varieties of crops and the intensive use of chemicals and other inputs. This has had its own consequences, especially in terms of environmental destruction and human health. Then, there are also problems of distribution, leading to a paradoxical situation of “hunger in the midst of plenty”.

Nepal has tried to emulate India’s success in food production, but it never enacted similar policies or legislation that would protect farmers and guarantee the purchase of their products at reasonable prices. Nepal was also very much influenced by the structural adjustment programs of development partners, leading to reductions in state support for farmers because of an emphasis on neoliberal economic policies.

While India supported its farmers, Nepali farmers were neglected by the state and exploited by traders and industrialists. Nepali farmers who produce a surplus are either unable to sell their products or are not paid well by middlemen. The recent case of sugarcane farmers not getting paid for four years is a case in point.

Furthermore, production costs have also risen. Many youths have gone abroad for work and with labor in short supply, wages too grew higher. For many households, especially in the hills and mountains, it makes more economic sense to purchase food through remittance than to spend time, energy, and input growing food. This is one of the primary reasons why about 30 percent of arable land is being left fallow. The expansion of road networks in the hills has helped supply food products – much of it imported – from urban areas to rural areas, a reversal in the process of agricultural (under)development.

With Nepal now opening up FDI in agriculture, corporate interests will no doubt enter the agri-business. But taking stock of what is happening in India, there needs to be a debate on whether this will help Nepali farmers and whether we should allow FDI in such a sensitive area at all.

So far, the major concern for both India and Nepal has been an increase in the production of foodgrains – India has been successful while Nepal has not. In the rush to produce more, both countries face new challenges in producing quality food of various types – diversified, organic foodstuffs that provide more nutrition with no harmful chemicals.

There is also the threat of extinction of major indigenous foods. As a result of the loss of agro-biodiversity and indigenous foods, the malnutrition rate has not declined in India, despite a surplus in food production. The situation is similar in Nepal too – there has been a rise in incomes, mainly through remittances, but the decline in malnutrition has not been at par with the reduction in poverty.

The next question regards the method of food production. Current methods require high doses of expensive chemical inputs, often imported in the case of Nepal, which may not be suitable for sustained production and the conservation of resources. Nepal could benefit in producing food from sustainable farming methods that use less or no chemicals, as these could fetch higher prices or attract tourists and visitors.

It is clear that in the wake of the protests in India, Nepal needs to rethink its own agricultural policies and facilitate a debate on whether inviting corporate interests into the agriculture sector would ultimately be a good thing.

The advantages, drawbacks, and alternatives to electric vehicles