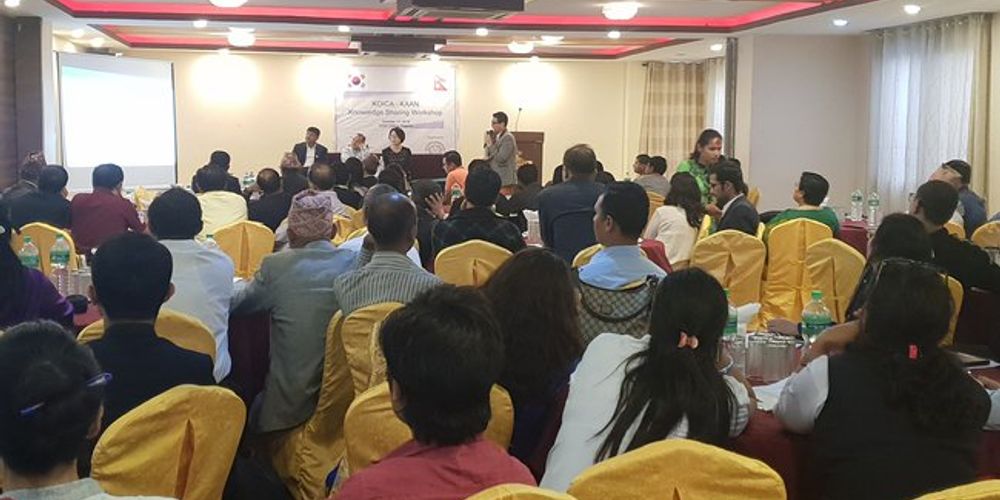 Nearly every adult Nepali must have attended some sort of training. Many hotels, lodges, and eateries would go bankrupt without their constant business. Trainings have covered all kinds of subjects—sewing, maternal health, sanitation, construction, gender-based violence, microcredit, and many more. Despite increasing opposition to NGOs, trainings continue to be used by both NGOs and the government as the main way of doing their work all over Nepal. It is the number one method of changing behavior, learning skills, or spreading awareness. In the year 2019, lots of people sitting around in a room looking bored is still the actual last ‘deliverable’ in the logframe of many fancy-sounding projects.

The training will be on whatever is fashionable and people can get money for—topics like climate change adaptation and resilience have replaced sanitation nowadays, but skills training is still popular. No locals will oppose holding trainings but nor will they have chosen the topic. The training might start with a trust-building or ice-breaker exercises (amazingly, people do still fall backwards and hope to be caught). Attendees learn to make the most out of light-hearted moments and opportunities for laughs. Because everyone knows that the meat-and-drink of a training is to sit and listen to somebody telling you stuff for a long time. Participants don’t really participate and its best to mentally prepare to receive hours of non-stop gaph. Mobile phone screens have taken some of the boredom away but ‘participants’ can expect to be told off for not paying attention. Yes, the whole experience is just like being back in school.

The stated aim of a training is to pass on knowledge, empower a specific group, or kickstart income-generating activities. How participants are supposed to go from passive listening to behavior change or becoming entrepreneurs is never really clear. Trainings as a method exist and persist in their own world, untouched by evidence or theory. But the real aim is very often just to set up a committee or user group to ensure the ‘sustainability’ of the training and then decide who will attend the committee and occupy which post. After all, local people—being, ahem, not at all busy and having plenty of spare time—definitely love attending more committees. If you are being even more cynical, then the actual aim of training is just to tick a box and create a statistic in a report that says x number of participants have been trained on y topic.

An NGO training isn’t really an NGO training if the following doesn’t happen at least once: 1) a presentation on a complicated topic (e.g. “resilience”) based on a generic powerpoint presentation that almost no one in the room (including the presenter) understands fully or can communicate without using incomprehensible jargon; 2) the presentation is given by the youngest member of the training team who is then roundly criticized by the participants at the end of the presentation; 3) the leader of the training team then has to step in and re-explain the whole basic purpose and meaning to everyone, preferably using funny metaphors; 4) and finally the local committee/user group is formed, speechifying takes place, and a group photo/selfie can be taken. Smart locals just want to fast forward to the eating points and setting up a committee stage, bypassing the need for stages 1), 2) and 3).

If the training is held in a city or town then there is no excuse for not holding it in a hotel. Ideally there should be a quality dal bhat with meat options, sporks in the cutlery range, and—later on— sweets in a cardboard box. The sweets often act as a necessary pick-up during a slow afternoon, taking the edge off of listening to long lectures. Naturally, people are interested in the food and, of course, the per diem—if there is one. In some countries in East Africa elders attending NGO trainings apparently call this a ‘sitting fee’, which is apt.

If the training is being held outside Kathmandu and national staff from the NGO HQ in Kathmandu are attending, then the main aim is to get back to Kathmandu as soon as possible. It doesn’t matter if the training is being held next door in Nuwakot or far away in Jumla the need to return home ASAP is real. Everything must be speeded up and packed into a short time for the Kathmanduites. This includes the standard rituals of felicitation and garlanding of visitors, auditing, partner meetings, meetings with local officials, site visits and so on.

The speeches do not end when the training ends as any present local officials or politicians have to have their say in reverse order of hierarchy (the first speaks last). These speeches can be a little more interesting than the training as local leaders use this opportunity to say what they think that their community really needs, which is usually a road. At the end everyone expects a certificate of participation, which will probably be hastily signed by the leader of the training team at the last minute with at least one participant’s name misspelled.

When Mayor Dillip Pratap Khand assumed office, he set out on a mission to turn Waling into one of Nepal’s first ‘smart cities’. Five years on, he has little to show.