Reservoir-type hydropower projects might generate much-needed electricity for Nepal but they also come at significant environmental, ecological, and social costs. 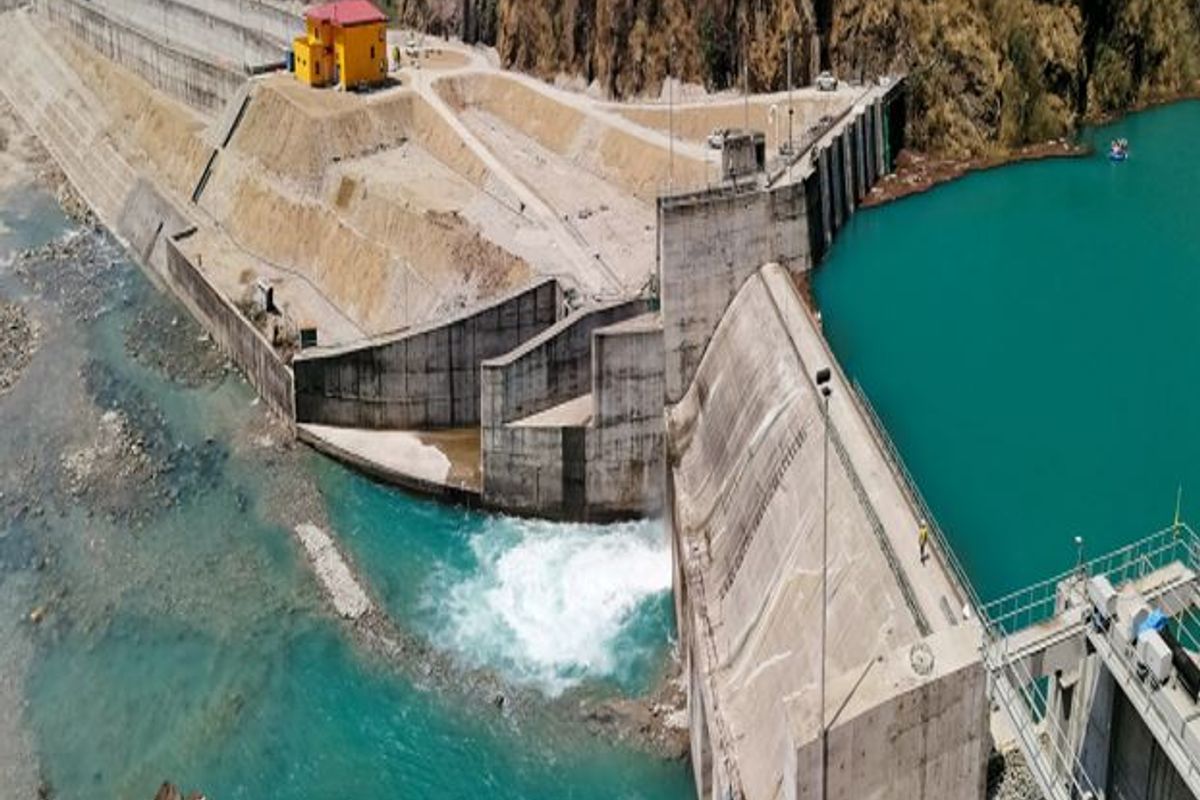 Buddha Tamang’s ancestors were fishermen on the Tamakoshi and Singati rivers. So it was only natural that he too would take to fishing. Tamang and his brother have been fishing since they were children but these days, it is getting harder to catch fish.

Tamang lives in the small riparian town of Singati, which lies at the confluence of the Tamakoshi and Singati rivers.

“It is a great relief that hotels and guest houses flourishing in Singati provide us with other sources of income as it is now impossible to make a living through fishing,” said Tamang, who works in the kitchen of a nearby hotel while he is not fishing.

Singati’s fortunes have changed since the coming of the hydro projects, but not always for the better. Locals say that the increased footfall from visitors has definitely benefited them.

“Forty years ago when I first came to Singati, Singati was at the junction of multiple villages with a few houses on the riverbank and a communal cremation site for nearby villages,” said Makar Bahadur Khadka, a local who has lived in Singati since 1983 and runs a tea shop along the Charikot-Lamabagar road. “Upper Tamakoshi Hydro has played a significant role in developing and rehabilitating the Charikot-Lamabagar road section that was devastated during the 2015 earthquake.”

But the large-scale infrastructure projects have also taken a toll on the Tamakoshi basin’s rivers and riverine ecology.

Deterioration of biodiversity and the aquatic ecosystem within the larger Tamakoshi basin is a visible ecological impact generated by the hydroelectricity projects, as locals like Tamang and Khadka attest.

Tamang and other local fishermen too reported a significant drop in fish catches and the number of fish species caught in the Singati river. Currently, only the common snow trout (Schizothorax macrophthalmus) is commonly caught in the Singati river. Before the river was dammed, at least five different species of fish were caught, according to locals.

Hydroelectric projects primarily affect the fish biodiversity in host rivers due to their dams, which are installed across the breadth of the river upstream from the powerhouse. These dams block the migratory path of fishes that migrate upstream and downstream for spawning and feeding.  A report published in the Nepalese Journal of Aquaculture and Fisheries shows how barrages and hydroelectricity dams have impacted the migratory patterns of common endemic fish species found in the river systems of Nepal that migrate in a potamodromous pattern (within the freshwater system) in response to thermal cues and to search of food.

Fish ladders or passages are thus commonly required by environmental protection laws across the world and in Nepal to let fishes traverse the dam structures to fulfill their usual migratory course. But they alone have not been successful in allowing fishes of all species or in all stages of the lifecycle to negotiate their passage. A 2018 Asian Development Bank (ADB) report notes that the separation of river systems in Nepal by dams with less effective fish passages have disturbed the natural spawning and feeding habits of migratory fish. This has led to changes in the composition of upstream and downstream species, forming a metapopulation structure across the dam infrastructure and even causing losses of the species altogether.

According to Adarsh Man Sherchan, a conservation biologist and founder of the Bagmati Biome Project, fish passages in Nepal are often inconsistent with the migratory patterns, capabilities, and behavior of endemic fish species.

“The passages are often too high from the downstream river surface and are thus only usable for fish during the monsoon when the riverbeds are at their highest level,” said Sherchan, who was recently involved in the development of the Trishuli Assessment Tool, a methodology for conducting proper biodiversity assessment of fish and macroinvertebrates in the Trishuli river basin.

Furthermore, the significantly reduced flow of the river – a result of the diversion of the upstream flow into the intake pipe (penstock) to operate the turbines in the powerhouse – often prevents endemic migratory fish species from traversing the river system. Although the environmental provision in the Hydro Power Development Policy of Nepal requires hydro companies to allow 10 percent of the minimum monthly discharge of the river to its natural course below the dam, dam operators are known to compromise on this requirement during the dry season to ensure a maximum flow rate for power generation. This has led to dry beds in river stretches between where the dam impounds the water and releases back into the river system during the dry season, severing a contiguous passage for fish.

The ADB study report also points out that the blanket 10 percent in-stream flow mandate for all hydroelectricity projects does not take into account the distinct ecological and hydrological realities of rivers. The report recommends that instream flow mandates be determined by scientific studies depending on the type of fish, local ecosystem, and river gradient.

However, Bhattarai says that the current regulations require dam operators to maintain the level of instream flow as directed in their respective EIA reports, based on the unique ecological and anthropogenic characteristics governing the river system, on top of the blanket minimum 10 percent mandate. Hence, the problems seem to originate from weaknesses in implementation of the regulations.

The 2018 ADB report also points out the absence of baseline information regarding the migratory pattern of endemic fish species. Hydroelectricity projects do conduct preliminary surveys of fish and aquatic biodiversity, as required by the Environmental Impact Assessment (EIA), before constructing dams. But these assessments are often insufficient, says Balaram Bhattarai, a senior environmental officer at the Hydro-Consult Engineering Company which grew from the engineering arm of the Butwal Power Company (BPC).

Sherchan too confirms that the baseline study is often poorly conducted with consultants drawing hasty conclusions from insufficient data. The ‘unavailability of species information’ is interpreted as ‘species not present’, which distorts the findings of the baseline study altogether, says Sherchan.

“The deep and steep gorges of the mountain rivers in the Himalaya also make it very difficult to access the rivers to set up stations and conduct fish stock and species enumeration,” he said.

Nepal’s hydropower industry is currently oriented towards large reservoir-type projects of high capacities, following the aspiration of successive federal governments to ramp up Nepal’s total generation capacity by more than five fold before the end of the decade. Hence, large reservoir or storage-type projects such as the 1200MW Budhigandaki Hydropower Project and the 750MW Upper Seti Storage Hydroelectric Project feature prominently on the list of Nepal’s national pride projects.

However, these hydroelectric projects maintain reservoir systems that are significantly larger than the head ponds for run-of-the-river (ROR) hydroelectricity projects. As they inundate more hectares of the upstream terrestrial land cover, they lead to larger ecological and social impacts on the wider riparian ecosystem and local habitats. But such projects also allow the storage of excess flow discharge during the monsoon in order to maintain stability in power generation around the year. According to Bhattarai, the current portfolio of ROR hydroelectric projects in Nepal are unable to generate sufficient electricity during the dry seasons, as such projects rely primarily on the natural flow discharge of rivers.

Nevertheless, mega hydroelectric projects with taller dams and larger reservoir systems in the lower geological belts of the country definitely calls for the hydropower industry, its regulators, and all stakeholders to account for severe ecological impacts across the length of their river systems. Reservoir systems alter the physical and chemical composition of river water upstream and downstream, leading to issues such as eutrophication and thermal stratification that further harm the native aquatic ecosystem. Eutrophication and thermal stratification are not significant ecological issues for smaller head ponds behind ROR-type hydroelectric projects, notes Bhattarai.

Sherchan advises that it is high time for the Nepal government to conduct a broad Strategic Environmental Assessment (SEA) of all major river basins and subbasins to explore the biological, hydrological, and geological conditions of river and riverine systems to assist the planning of future water projects. Such baseline studies will help power producers and regulators take precautionary measures and conduct periodic monitoring to mitigate any adverse impacts. Such studies can, for instance, guide projects to thoroughly clear vegetation in the territories planned for submersion to avoid reservoir eutrophication and install mechanisms to allow selective withdrawal of water from dams at different heights to prevent thermal stratification.

According to Pravin Kumar, an engineer at the Ministry of Energy, Water Resources and Irrigation, the Water and Energy Secretariat of the Nepal government is presently conducting this very assessment of all river basins in the country to guide water resource development strategies in the future.

Back in Singati, Buddha Tamang and his brother still catch four to five kilograms of fish a day so he will not stop fishing anytime soon. But now, he has a new worry – of getting swept away while fishing.

“Not long ago, an abrupt rise in the river’s waters caught me off guard while fishing on the Tamakoshi side. It almost carried me away,” said Tamang.

Tamang plans to continue fishing until the foreseeable future but he is not willing to put his life on the line.

“I am okay with running out of luck catching fish but not with staking my life,” he said.