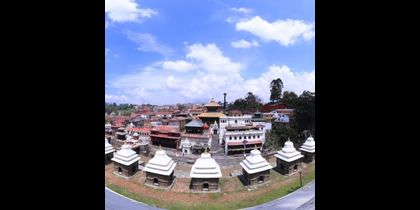 Through my photographs, I have, for years, tried to capture the living synergy between the people and places of Kathmandu Valley. Every monument, temple, public space obviously serves a functional purpose. And in the best architectural edifices, one can discern the magic of the living, lived, synergy between edifice, people, place. However, that synergy oftentimes dictates a shot’s composition and occupies the foreground in the viewer’s consciousness, while the architecture recedes into the noise. During the past few months of the lockdown, I would venture out on photography assignments to capture the lockdown’s effects on Kathmandu’s populace. But in the course of my trying to document the impacts, I would often find myself wanting to shoot Kathmandu’s monuments, temples, and public spaces. I knew that documenting them in a setting devoid of people would be to present them through a frame we are not familiar with. For me, the shots in this photo feature are thus almost-absurd pieces—unmoored as they are from context—yet they’ve allowed me to pull to the foreground the details of our lived heritage that often get blurred by the living energy of Kathmandu’s people.

Can we stop talking about public intellectuals?