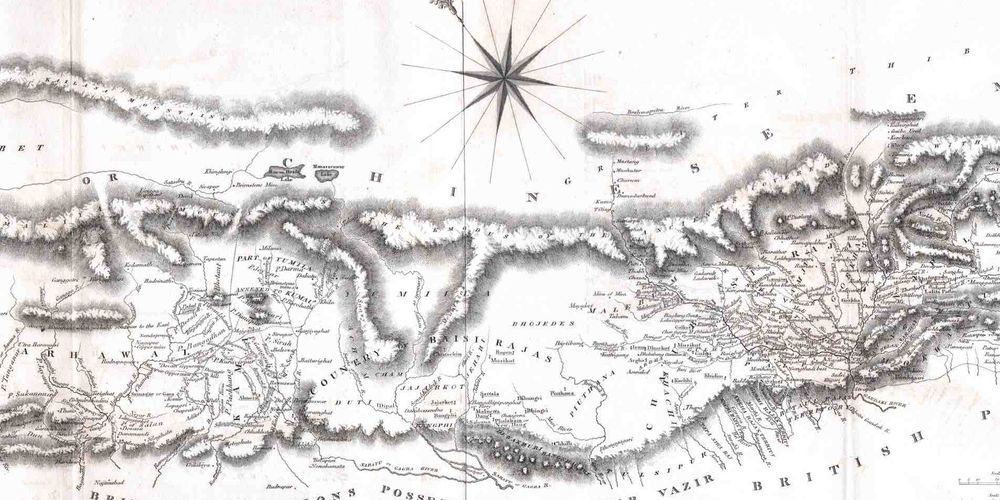 We are excited to announce a series of essays by writer Amish Raj Mulmi on the Gorkha Empire. Over four essays, Mulmi revisits some of the the most clarifying works in Nepali history to tell readers how 18th- and 19th-century Nepal was created and functioned. As he argues, the "history of Nepal as we’ve been taught ignores the nature of Gorkhali rule in the new territories they had conquered."

In this first essay in the series, Mulmi tackles the question of how the tiny Gorkhali hill-state territorially expanded to become a powerful military force in the Himalaya, ready to confront the British Empire. Also read the second and third essays from the series. Watch this space for coming essays in this series. And follow us on Facebook, Twitter and Instagram to for updates.

“When an old man dies, his words die with him… What you who are gathered here will hear from me, pass on to your children, and they to ours; and this kingdom will endure.”

In 1742, a tiny hill state in central Nepal began to dream, courtesy of its young ruler’s ambitions. Seven decades later, the hill state would give its name to an empire spanning nearly 200,000 sq. km, from the Teesta river in the east to the Yamuna in the west, an empire running parallel to the highest mountain peaks and encompassing some of the most fertile lands in the subcontinent. And an empire it was, gobbling up tiny hill principalities and larger kingdoms in a military juggernaut that overpowered several peoples and cultures, until it came to an absolute halt in 1816, wedged in on three sides by an even more impressive colonist, and on the north by the same Himalayas that protected its borders.

So how did Gorkha, a tiny hill state less than 250 sq. km in mid-18th century, audaciously rise to become an empire more than nearly 100 times its size?

The easy, and reductive, answer is the one we’ve all grown up with: it was the vision and foresight of Prithvi Narayan Shah, coupled with the bravery of Gorkha soldiers, that ‘unified’ Nepal. Nepali history then becomes a linear narrative, wherein all cultures that existed prior to the Shah empire are considered militarily weaker (such as the Newar states of Kathmandu Valley), or are relegated to the footnotes of history (the baise and the chaubise kingdoms). How else could a tiny Gorkha overpower these kingdoms?

This history of Nepal as we’ve been taught ignores the nature of Gorkhali rule in the new territories they had conquered. It reduces a mammoth campaign of expansion to a story of valor in the face of adversity (Balabhadra Kunwar’s story comes to mind), or of territorial hunger by a malicious ‘enemy’ (the East India Company). This history, handed down to us royally approved, ignores the complexities of empire building, and its impact on the various peoples and their cultures. This does little justice to the Gorkhas’ political and military acumen and to the pre-existing cultures that the Khas-Arya Gorkha empire eventually subsumed within itself. Lastly, the white-washed version ignores the undercurrents of the many divisions that currently plague Nepal, and find their roots in this story of imperial proportions.

“This country is like a gourd between two rocks.”

Prithvi Narayan Shah’s most famous dictum, the allegory of Nepal being sandwiched between China and India, is as ubiquitous as his calendar-art images in the country. Yet, this simple statement captured the most important geopolitical reality for a Himalayan state with ambitions.

The historical background against which Prithvi Narayan Shah became the ruler of Gorkha was one of flux. In the Indian subcontinent, the East India Company had begun to flex its muscles, and the British had begun manipulating political events in Awadh. In the 16th century, Mukund Sen of Makwanpur had divided his kingdom between his four sons, one grandson and a nephew, and the resulting states further fragmented. The long-standing feud between Lamjung and Gorkha continued, as did those between the three warring factions of the Newar Mallas in Kathmandu Valley.

Popular history suggests Prithvi Narayan Shah stood upon Chandragiri’s summit and surveyed the valley, expressing a desire to conquer it. There may have been other kings before him with similar thoughts, but unlike the others, Prithvi Narayan Shah made it his mission, and to do that, he needed to change the way Gorkha thought.

Consider this extract from historian Mahesh Chandra Regmi’s Kings and Political Leaders of the Gorkhali Empire, 1768-1814:

[T]he Gorkhali rulers devised the principle of allegiance to the dhungo, which literally means a stone, but used metaphorically to denote the state. The concept of dhungo implied that the Gorkhali state was a permanent entity that transcended the person of the ruler. In other words, allegiance to the state superseded personal loyalty to the ruler.

To modern readers, it may appear unusual that a principle we take as a given today – allegiance to a state and not an individual – would be the cornerstone of the Gorkhali expansion. But for a hill-state in the 18th century, the metaphor of the dhungo was a radical approach to state-subject relations. Regmi explains:

The traditional principle of allegiance was based on kinship or personal loyalty to the ruler, which pre-Gorkhali states in the Himalayan region had used at the risk of frequently releasing fissiparous forces. These states were, consequently, subject to fragmentation because of such factors as the division of the succession rights among the king's sons and relatives by the king himself, or else disputed succession.

The fragmentation of Kathmandu Valley into three kingdoms, the baise and chaubise kingdoms of mid-west and far-west Nepal, and the bara and athara thakurai principalities of the Garhwal region, make sense when understood as infighting over personal loyalties. This is what made the Gorkhali campaigns so uniquely robust and revolutionary – a political ideal that allowed a people to pledge their allegiance to the modern abstraction of an amorphous, unchanging state.(Sources: Kings and Political Leaders of the Gorkhali Empire, 1768-1814 by Mahesh Chandra Regmi, The Invasion of Nepal: John Company at War by John Pemble, and The Silent Cry: The People of Nepal, 1816-1839 by Ludwig Stiller.)

But ideas by themselves do not an empire make. The generals, the officers, the soldiers – the cogs of the war machine – needed material impetus to participate in long military expeditions. As historian Ludwig Stiller explains in The Rise of the House of Gorkha, the empire’s second foundation rested on this carrot:

Land was the currency of the conquest, the means by which the rulers of the House of Gorkha paid for the victories that extended their rule from the Teesta to the Sutlej… The peasant had inevitably to surrender half of his crop in taxes, regardless of the government that actually ruled the land. What the Gorkhali conquest gave to the government in Kathmandu was the right to appropriate that revenue or to assign it either to the army, to an official of the state, or to a citizen in reward for services he had rendered to the state.

Land tenure systems across the hill states were based on a few pre-existing principles: all land was ‘understood’ to be the state’s property; free-hold ownership of land was the only means of increasing prestige and social standing; and land, as the primary source of wealth, could not be left idle. Add to this the primary systems by which the state awarded land holdings: the jagir grant, by which rulers granted noblemen (they were inevitably men) a tract of land the latter could farm or lease out for as long as they were in service; and the age-old birta grant, which was similar to the jagir except it was interminable without royal orders, and at times a mortgage in lieu of funds borrowed from the individual. While the birta was often awarded to high-ranking Brahmins and politically influential groups, such as members of the royal family and the nobility to retain their loyalty, jagir grants were awarded to “civil or military employees and government functionaries.” Rarely did the empire pay its civil servants in cash. Land compensated the costs of the campaign, while appeasing “the land-hunger of an army that was composed, for the most part, of peasants.”

As the Gorkha Empire expanded, land grants became crucial to its survival. Its noblemen, generals and soldiers all received grants in varying degrees, with new wastelands, usually in the Terai, regularly being assigned to them as the military increased in size. Tax revenue from such grants was essential for the upkeep of the empire. Jagirs by their nature were dependent on whether a nobleman continued to serve the court (or the king), which was decided through an annual review system called pajani. Further, Prithvi Narayan Shah’s dictum in his Dibya Upadesh ensured that soldiers from the lowest rung onwards were to be awarded land: “An important point is that the soldiers required for the king should be given their house and land and that they farm it, so that they can support themselves by both means.”

These economic motivations and the changed political relationship between a subject and the state both kept the bhardars and the military in favor of expansion. And once the war machine began to roll, there was little to stop it. Indeed, such was the pace of expansion and the resulting riches for the bhardars and the military leadership that even the loss of nearly 64,000 sq. km of land in the western Terai after the Sugauli Treaty of 1816 barely weakened the Gorkha kingdom and its polity; all it did was to bring the expansion to a halt.

The Gorkhali campaign was built on these two conditions: the dhungo at the centre of the Gorkhali universe, and the land the dhungo conquered, which could be owned by the bhardars. That singular motivation was adequate to push the Gorkhalis, and the thousands of men and women in their territory, to the battlefront. But controlling a new territory by military victory alone does not sustain an empire. An empire is also made up of its people, and it was here that the newly emerged hill-state stumbled.

Also read the second and third essays from the series.

Cover photo: Map of the dominions of the House of Gorkha, from An Account of the Kingdom of Nepal by Francis Hamilton (1819).

An account of how and why, on Lipu Lekh in 1816, an East India Company surveyor interacted over three days with the Deba of Taklakot, the official representative of imperial China in the area.

A regime on the verge of collapse

As the Rana regime nears its downfall, Nepal gets its first constitution