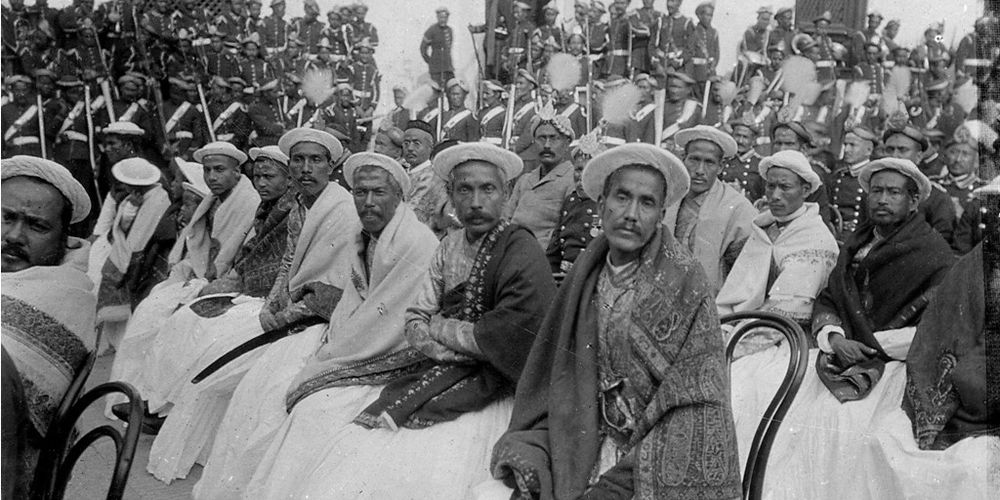 This is the fourth and final installment from our series of essays on the Gorkha Empire. Also read the first, second, and third essays of the series.

(From The Silent Cry, Ludwig Stiller)

Transposing and judging an 18th-century imperial project based on today’s standards has its limitations. It could be argued that all states worth their name at the time would have wished to acquire more territory, and that by the sword. The fact that what began as the Gorkha empire has survived to the modern day further lends credence to the uniqueness of the Gorkhali project – its ability to manage a million mutinies that exploitation of a people and concentration of power has produced, including a civil war. Its imperial project was astoundingly successful, and as British historian John Pemble has written, “there seems no reason to suppose that, had the war with the British not intervened, this empire would not have proved viable.”

The empire did prove viable, except that it failed to transition from a military state founded on rent-seeking ideals into a transnational state built around the idea of nationhood. It retained (and retains, in many ways) the extractive feudal state-citizen relationship that had been one of the pillars of its military success. Despite being territorially limited by the East India Company (and eventually the British Empire), the empire made no effort to develop independent local economies in the conquered territories. As Stiller wrote, the entire nation was treated as a jagir, with trade being restricted to a few families who traded to and from Kathmandu, where a newly enriched class displayed a hunger for all the accoutrements of the European nobility. In fact, when Rana rule ended in 1951, “at least one-third of the total cultivated area in the Kingdom was under birta tenure, and approximately three-fourths of the total area under birta tenure belonged to members of the Rana family.”

More than 60 years later, land-holding patterns in Nepal are among some of the world’s most unequal, despite a land reform practice that began in the 1950s. In 2013, the top five percent of land holders collectively owned 37 percent of total agricultural land in Nepal, while 47 percent of land holders owned just 15 percent. And although the total area under tenancy has been greatly reduced, this has given rise to informal tenancy through unregistered, oral contracts, where landlords circumvent tenancy laws. It is assumed that nearly 30 percent of all rural farming households, or 1.5 million households, continue to operate as tenants.

Land-holding patterns continued to be skewed towards the upper castes: 40 percent of Dalits do not own any land at all; in contrast, among Brahmins and Chhetris, the figure is six percent. In The Madhesi Upsurge and the Contested Idea of Nepal, Kalpana Jha suggests land reform measures in the Terai “did less to alter the status quo,” with feudal ownership of land under absentee landlords, who mostly come from the hill upper caste, still as common as earlier. It can be reasonably assumed that land reforms have made no serious dent to the landholding patterns inherited from the days of Ranas and the empire.

Land reforms could have had a measure of success in closing the cracks in Nepali society had the political regime evolved towards decentralization. But the Nepali state’s beginnings as a military empire, and growth as a revenue-extracting state, made that impossible. Indeed, all empires that had their roots in conquest eventually conceded ground to local-level functionaries, such as jagirdars or birtawalas in Nepal’s case. But most functionaries were indebted to the Kathmandu court for land grants, which continued into the Rana rule, and developed into what we call aafno maanche culture. Added to that was the prevalence of the patronage system – chaakari – under which a person could rise socially and materially only by proving their servitude to bureaucratic and political superiors.

If land marks a primary divide in Nepali society, so does identity. Prithvi Narayan Shah’s foresight – noticeably absent among his successors – that Nepal had chattis jaat was an acknowledgement of the various caste groups that lived in his empire. Indeed, the Rai and Limbu countries of the eastern hills that were assimilated into the Gorkha empire during his time were allowed to continue cultivating their lands under the kipat cooperative system, where “each person had the right to the exclusive use of a particular piece of land,” according to Mahesh Chandra Regmi. The kipat system, under which the land could not be sold to non-clan members, was eventually abolished “in a piecemeal manner between 1964 and 1991.”

Beginning with Rana Bahadur Shah, however, the process of Hinduization began to take a systematic form, with a Hindu king providing the newly built state an identity and a symbol to rally around. For example, Rana Bahadur’s cow slaughter laws were often enforced by forbidding any future slaughter on pain of death, and a damai was skinned alive on suspicion of killing a cow. The Hinduization of Nepal continued under the Ranas, particularly with a legal code called Muluki Ain, and after their decline, under the Shah kings, too. As King Birendra put it, “In Nepal, the monarchy and his subjects have been governed by Dharma, a system drawn from the Hindu religion. The King cannot change this value system.”

Indeed, despite the fall of the monarchy and the transfer of political power to the Parliament (and the two Constituent Assemblies), political leaders – all men – belonging to the dominant caste groups have been successful in retaining control of the Nepali state. While the first CA was notable for its ethnic and class diversity, the second CA demonstrated who still held the reins of power: Brahmin-Chhetri-Thakuri caste groups make up 41 percent of total seats in the second CA.

The traditional hold on power was demonstrated in the proceedings of the CA, too. A 2014 Martin Chautari briefing paper states that the big three parties – NC, UML and UCPN-M (now Maoist Centre) – “divided the leadership of ‘three vital committees’ (the Political Dialogue and Consensus Committee, the Drafting Committee, and the Committee to Study and Determine Constitutional Records) among themselves.” Further, the first CA rules had specified all committees would have “proportional inclusion on the basis of the presence of the party structure of the Constituent Assembly as well as on the presence of all minorities, including women, indigenous nationalities/Janajatis, Madhesis, Dalits, people from backward regions and Muslims.” In the second CA, the rule was changed to apply only to the Committee on Constitutional-Political Dialogue and Consensus Building. The paper concludes: “There is no institutional mechanism within the CA to ensure the proper representation of the historically excluded.”

Political scientist Krishna Hachhethu identifies three major cleavages along which Nepali population can be divided today: pahadi vs madhesi; jaat (caste groups) vs janajati (indigenous groups); and high-caste vs low-caste Hindus. A fourth cleavage, between men and women, can be added, given the constitutional and the bureaucratic hurdles that stop many women from passing their citizenship to their children.

While the first divide, that between pahadis and madhesis, is attributed to the exclusion of the non-Pahadi from the Gorkha power structure, this holds equally true for the mountain communities, who are now slotted as janajatis. However, because the Madhesi movement has not fully articulated a path forward regarding class, caste and gender disparities, it risks becoming a one-dimensional movement that may wane in the face of larger, more united CHHEM (Caste Hill Hindu Elite Men, as described by political scientist Mahendra Lawoti) opposition. It is worth remembering that Madhesi high-caste groups were, albeit in much lower numbers, also part of the Empire’s power structure, just as a few upper-caste Newars from the Valley were. The CHHEM has, by guile or through political tokenism, co-opted the janajati movement as well. As a result, we have new constitutional provisions like the reservations for the ‘indigent Khas-Arya’, rather ironic considering the statute was intended to correct the very wrongs wrought by the Khas-Aryas who conquered and ruled Nepal.

What we have today is a new republic built on the old foundations that large sections of the population sought to replace. The empire hit its first roadblock in 1816, with the war against the East India Company. The same war engine, now without new territories to conquer, was attuned to the political intrigues of the Kathmandu court, which eventually allowed one family to rise above the others – recall that Jung Bahadur was much valorized by the military even before the Kot Massacre. With a modern bureaucracy, the Ranas refined the military-economic complex that they had inherited from the Gorkhas, under which maximization of revenue was the primary goal. The hopes of the 1951 movement were successively crushed under kings Mahendra, Birendra and Gyanendra, leading up to the two constituent assemblies that too were monopolized by the dominant caste groups.

Such has been the story of the evolution of modern Nepal: from an empire of the sword to an accidental state hemmed in by geopolitical realities. It lives today shaped by the sins of the past.

Ludwig Stiller, Prithvi Narayan Shah in the Light of His Dibya Upadesh (1968)

Stiller, The Rise of the House of Gorkha: A Study in the Unification of Nepal, (Manjusri Publishing, 1973)

Liz Alden Wily, Devendra Chapagain & Shiva Sharma, Land Reform in Nepal: Where is it coming from and where is it going? (Kathmandu: DFID study, 2008)

Krishna Hachhethu, “Madheshi Nationalism and Restructuring the Nepali State”, (Paper presented at an international seminar on "Constitutionalism and Diversity in Nepal" Organized by Centre for Nepal and Asian Studies, TU in collaboration with MIDEA Project and ESP-Nepal 22-24 August 2007)

Hachhethu, “The Question of Inclusion and Exclusion in Nepal Interface Between State and Ethnicity”, (Paper presented to the Conference on “The Agenda of Transformation: Inclusion in Nepali Democracy” organized by Social Science Baha on 24-26 April 2003)

Also read the first, second, and third essays of this Gorkha Empire series.

Photo credit: “On the crowning day of Tribhuvan as King.” From Madan Puraskar Pustakalaya.

Juddha faces resistance from the Rana family, the Nepali dissenters, and the British India