The mountain people of northern Humla

The mountain people of northern Humla

Navigating Nepali citizenship, Tibetan heritage, and a dependence on China 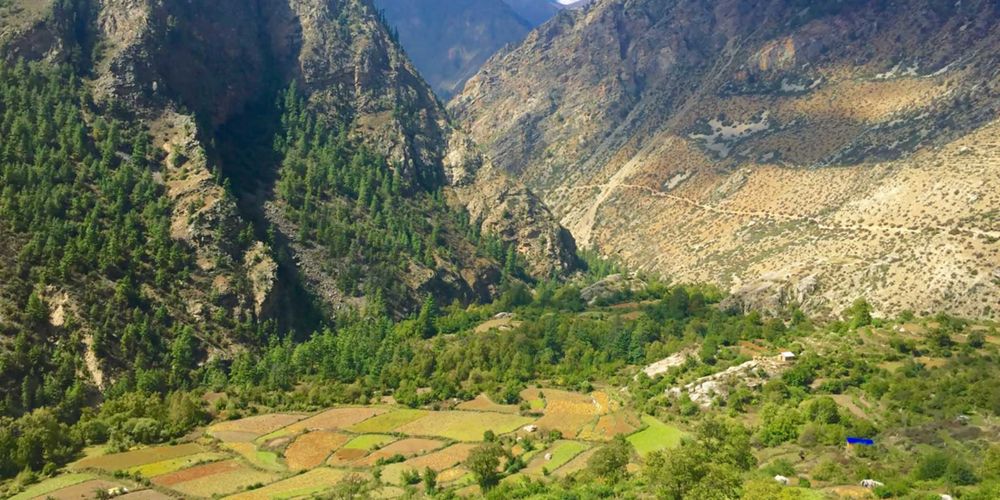 While the mountainous territory of Humla has a Hindu majority, Buddhists originating from Tibet inhabit the upper northern part. The Humlis here, near the border with China, boast a rich Tibetan heritage, practice Tibetan Buddhism, speak a variation of Tibetan termed Humla Tibetan, and proudly preserve a traditionally Tibetan culture. But they are not citizens of Tibet (China), nor are their recent ancestors. In fact, these Humlis have lived in upper Nepal for many years with no direct political connection to those living across the border. Isolated from the rest of Nepal by a lack of motor transport, Humla receives little attention from the Nepali government. Instead, being positioned very near the Chinese border, Chinese goods and materials are ubiquitous and dominating in the settlements of upper Humla. With little Nepali influence, a dependence on China, and traditional Tibetan customs, how do the people of upper Humla define who they are?

With the disparity between the countries so apparent, it’s impossible not to confront what side of the border one comes from.

Nil Bahadur Lama, the inspector of the Nepali police force in Hilsa, occasionally agrees to take small groups of tourists over the border into the official territory of China. He commented that this space just before Chinese customs is a safe venture only with his accompaniment. His tone emanated a palpable spirit of danger as he alluded to the security efforts of the other side, making sure to point out a large camera stationed right over the line. The device amplified the stark contrast between the enforcement methods on either side of the border. On the Nepal side, people sometimes pass into Nepal without a single guard being present. China, on the other hand, possesses a massive building that blocks the road so every incomer must approach it. The first sight of the Chinese side is overwhelming, especially in comparison to the measly tent stationed on the Nepal side, worthy of a nying je (Humla Tibetan phrase for pity).

With the disparity between the countries so apparent, it’s impossible not to confront what side of the border one comes from. Many of the Humli villagers expressed fear about how dominant the Chinese are, citing examples such as setting high prices, dictating that only one person may get one food item at a time, oppressing Tibetans, and even beating Humla traders if there was a mistake on their permit. Humlis are at the mercy of the Chinese, but it is precisely China’s provider-ship that makes Humlis place great value on their relationship with China. When asked about their opinion of China, however, the majority of Humlis responded with a resounding, “I love China! China is so good.” What initially comes across as a lack of concern for the plight of Tibetans living in China and in exile, while being of Tibetan origins themselves, can be understood by listening to what often followed the first comment, “It’s much cheaper in China.” Humlis weren’t being indifferent to the suffering of Tibetans, nor were they brainwashed to forget their own hardships with the Chinese, they were relating the initial question to their lives on a daily and personal level. The Humli’s capacity to buy goods from China impacts their lives by reducing costs and receiving more variety.

“It’s much cheaper in China.”

Two specific interactions with Humlis help to shed light on their lived experiences, providing insights into how their priorities shape their thinking. Paljor, 28 years of age, originally from Yari but living in Hilsa for the tourist season said, " This is not a matter of like or dislike, I don’t get to have an opinion. We can’t survive without the goods from China. No, we are not happy with some of their restrictions but what can you do? We need them. They provide for us, what more can we ask for?” The other was with Padol, 30, a young mother from Yulwang, speaking while juggling two small children and making lunch,"Due to Purang, we are not so poor all the time. We used to be very poor. I always hope the Nepali government would do something to reduce the poverty in Humla. For now, Purang gives us goods and for that, I am thankful." The Hilsa road, which runs directly out of Purang, is one of just two major roads in Humla, none of which connect to Nepal’s urban centers in the south. Few villagers here hold Nepali passports, relying instead on the permits from Simikot to travel to Purang; few travel outside the bounds of Humla and Purang, and if they do, it’s typically to India for pilgrimage. Humlis here have little hope that government support for Humla will increase in the near future. When asked about the Nepali government, person after person laughed and either said, “They do nothing,” or, “I don’t know.” Typical markers of national identity are noticeably absent from the daily lives of people in Humla. What is present, however, is a vibrant Tibetan culture mixed with a distinctive Humli culture, albeit one that has intrinsic Nepali citizenship, further complicating the question of identity. Boasting large photos of Rinpoches and Lamas in their shrine rooms and adorning prayer flags in front of every home, these Humlis proudly practice Tibetan Buddhism. Many said they prayed to the Dalai Lama and expressed sadness that they could no longer visit Mt. Kailash, a popular pilgrimage site a few miles past Purang in China. At the school in Yulwang, students learn Tibetan language through primary school, incorporating Tibetan history as well. An English teacher, a man from Limi, who has worked at the school for ten years spoke about the importance of Tibetan language, saying, “These students are [originally] from Tibet so it’s important to preserve their culture, scripts, and language. They must know Tibetan to preserve their heritage.” He said he was proud of his Tibetan heritage, but also, to be Nepali. Similar rhetoric surfaced regarding the preservation of Tibetan culture from Tashi Bier, 43, in one of the Nyin villages, “Tibetan culture is important to me. All of the villages around Simikot are [of] Tibetan [descent] and they preserve Tibetan culture and always will. I will pass it down to my children and grandchildren, and so will they. This is who we are.” [caption id="attachment_15599" align="aligncenter" width="669"]

This strong sense of pride for Tibetan heritage stimulated other conversations regarding the Chinese occupation of Tibet, delicately phrased as the “situation in Tibet.” Most responses fell in the same vein as the phrases of, “pity,” “sad,” or “I don’t know.” However, two English speaking and highly educated Humlis expanded outside the bounds of a typically short answer. One was Tundup Rinpoche, in Muchu, who said, “China is a super power. Economically the facilities in Tibet are much better now and people have better things, more wealth, they are taken care of, no one is starving, right? As for the culture, what about the preservation of the dharma? The Chinese are all about squashing multiculturalism and only want one “Han” identity. I fear for the future of Tibetan Buddhism in China. But the Himalayan region is more like Tibet than Tibet with its culture and beliefs anyway.” Another was a monk in Yulwang, who said, “Well, it’s sad. But the Buddha was born in Nepal and enlightened in India, not Tibet. We follow the Buddha so all Buddhism is not exactly ‘Tibetan’. We respect the Dalai Lama but not for his political views. I am Nepali, yes, my lineage is Tibetan but I am Nepali. Actually, I am both. Our culture and religion look Tibetan. That is why there is so much Chinese confusion. That is why our monks need to dress up in plain clothes to go to Purang, and [why] there’s no chance of [pilgrimage to] Mt. Kailash. ” These two comments share a polite, yet intentional distance from the situation in Tibet. There is a distinct separation between the lived experiences of those in Tibet and the Humli people just across the border. The situation in Tibet is not something that Humlis personally identify with. Humlis, after years of physical separation from their Tibetan roots, have evolved to cultivate a divergent and unique culture different from, yet still reminiscent of, Tibetan culture. Nevertheless, a strong narrative of oppression currently defines the nation of Tibet; can the people of Humla be “Tibetan” without identifying with this crucial element?

Humlis, after years of physical separation from their Tibetan roots, have evolved to cultivate a divergent and unique culture different from, yet still reminiscent of, Tibetan culture.

Many young people from Humla leave their villages to attend Tibetan school either in the Kathmandu valley or elsewhere. The youths who attend these explicitly Tibetan schools, funded by the Tibetan Government-in-Exile, are confronted with daily reflection over their identities. Many face a newfound burden to free Tibet, citing feelings of indebtedness to the Tibetan community for their education. This encumbrance seemed to affect the identity of all Himalayan students who study in Tibetan schools in general. For some, their time in the school caused them to ardently identify with the label ‘Tibetan’, while for others it drew them to cling more towards the label ‘Nepali’. Humla youth Pema Lama, who attended Tibetan school but did not identify as Tibetan, said, “Are we fighting for the Tibetan issue, culture or religion? They have to be separate because they are very different.” The insistence on specifying a Tibetan identity was often based on the assumption that a Tibetan identity signified Tibetan nationalism, but this is not always the case. While the jury is still out about whether or not these Humlis are officially Tibetan and what that would mean, the term ‘Humli’ (in English) seemed to be the most unifying term that the villagers rallied behind. Nepali by citizenship, but culturally Tibetan, Humlis here exist in a realm of their own. As a young mother from the village of Kermi put: “We live in the mountains. We are mountain people. That is it.”     All photos by the author. We welcome your comments at [email protected]

Emma Austin  Emma Austin is a student at Wesleyan University in the United States. She studied Tibetan and Himalayan peoples in Nepal.

From the fields of Kapilvastu to the Supreme Court