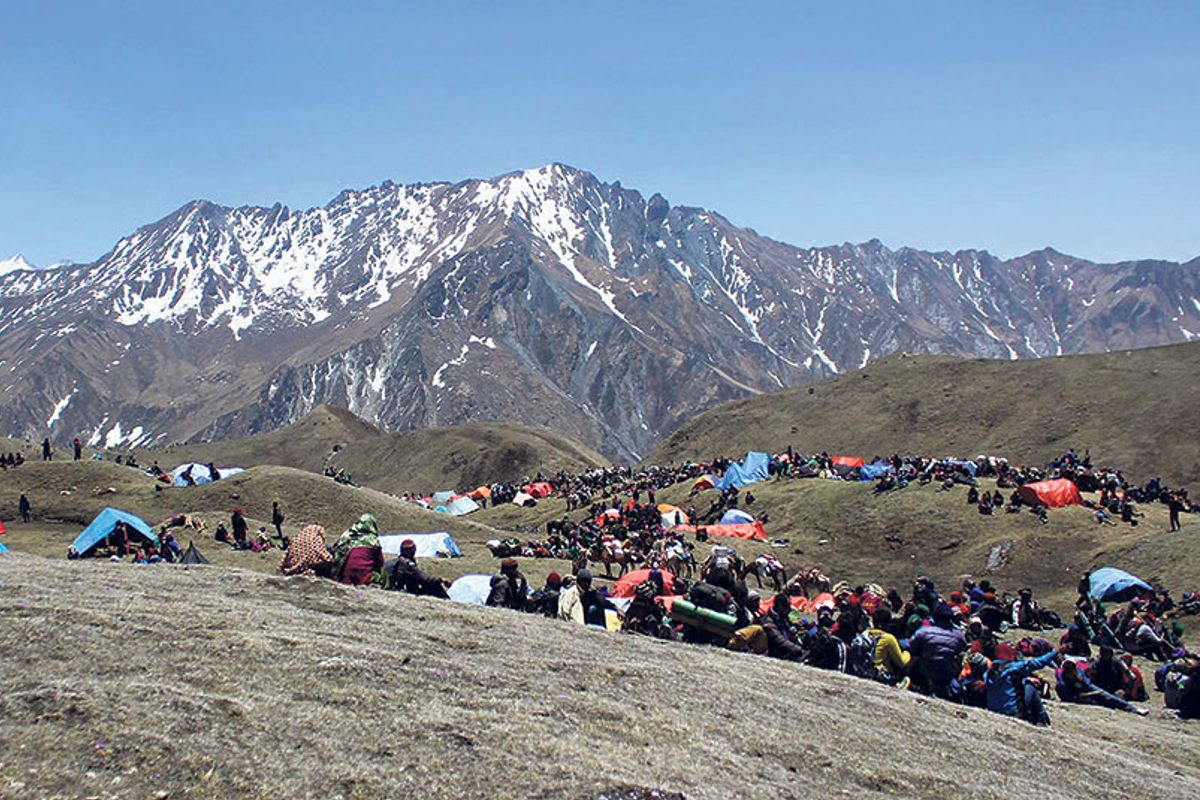 The pastures of Dolpa where thousands come to harvest yarsagumba. (Nagriknetwork.com)

When the second week of May begins, there is an air of excitement in the villages of Nepal's Himalaya. All schools close and the villages empty out. But the pastures are teeming with people. Man, woman, child — everyone is assembled as though it's a festival. For some, this annual ritual is born out of financial necessity; for others, it is an opportunity to earn hundreds of thousands of rupees quickly.

This is the story of how yarsagumba came to be so popular, more specifically the history of the fungus in Nepal.

The history of yarsagumba

In Tibetan, 'yar' means summer, 'tsa' means grass, 'kuhun' means winter, and 'bu' means insect, referring to yarsagumba's unique lifecycle as both a plant and an insect. A fungus grows on the larvae of certain moths and butterflies, turning it into a fruiting body that is highly valued for its supposed medicinal properties. In the Nepali language, it is known as both jiivanbuti and kira jadi. Scientifically, it is called Ophiocordyceps sinensis, but yarsagumba is its well-known name.

The first written history of yarsagumba dates back to 620 AD in the time of the Tang Dynasty. The text refers to the caterpillar fungus as a wonderful creature whose existence changes supernaturally from insect (caterpillar) to plant (fungus) in the rainy season and back to insect (caterpillar) in the winter season. Around the 14th century, Nyamnyi Dorje (1439–1475), a Tibetan lama and physician, was the first to mention the most desired of yarsagumba's properties in his book An Ocean of Aphrodisiac Qualities. 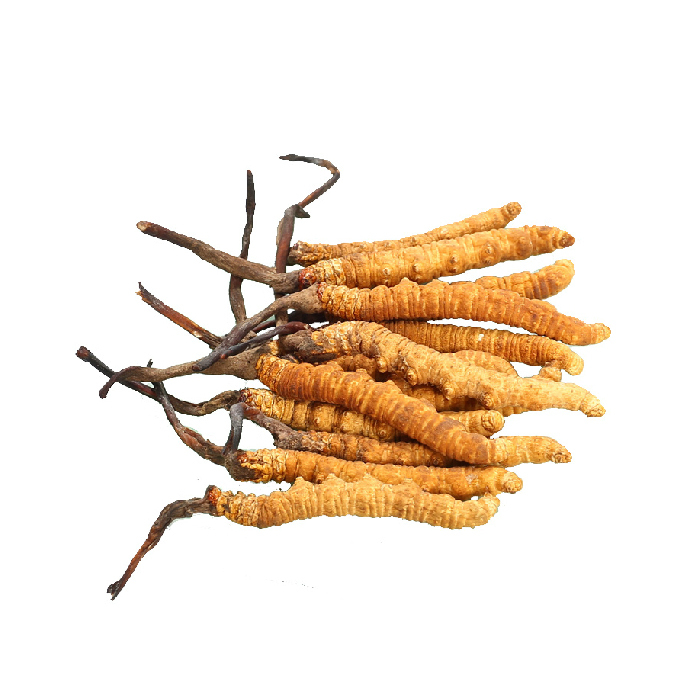 The history of yarsagumba in Nepal

The fungus is harvested between May and June, right before the monsoon starts, at elevations between 3,000 and 5,000 metres. Tens of thousands of Nepali villagers flock to the Himalayan foothills in northwestern Nepal to collect the fungus. They travel days to the highlands and live there for up to two months in makeshift tents.

Directly linked to the livelihood of people living in the Himalayas, this fungus has been providing employment opportunities to tens of thousands of people. Looking at the history of yarsagumba in Nepal, it is not clear when and where yarsagumba cultivation started. However, here are two reasons that could have led to the prevalence of this phenomenon.

“At that time, the Tibetans might have told the Himalayan tribes about the medicinal properties of yarsagumba, and that is why the Himalayan Amchis [medicine practitioners] began to use it," said 58-year-old Amchi Nsamgyal Lama Rimpoche of Dho Tarap. In addition, in the 1950s, when the autonomous region of Tibet was annexed by the People's Republic of China, thousands of Tibetans, including the Dalai Lama, fled their homeland through the Himalayas of Nepal. Some Tibetans took refuge in India while some -- mostly Lamas and Amchis -- took refuge in the mountains of Nepal. The Rimpoche believes that’s when the people of Tibetan origin started explaining the importance and virtues of yarsagumba to Nepali tribes.

Soon after, yarsagumba started being cultivated and traded in Nepal, especially in Humla and Dolpo where Tibetan culture was significantly present. Chakka Bahadur Lama, a Humla resident, started trading the herb himself back in 2042 BS when he got dangerously sick and was treated back to health with yarsagumba.

“I came to Kathmandu when I was 14 years old and I saw a Dolpo woman selling yarsagumba in her handkerchiefs at Asan Kathmandu. Since I was a child at that time, I did not care about yarsagumba. It was only later on, in 2042 BS, when I got really sick that I understood the importance of the herb. What clinics and hospitals could not do to nurse me back to health, a Tibetan Amchi in Taklakot [also known as Burang, which lies in Tibet] could do with the yarsa,” said Lama. Besides being the world’s most expensive medicinal fungus, the yarsagumba is a medicinal herb that is used to cure anaemia, chest and lung infections, tuberculosis, Hepatitis B and kidney and liver diseases.

At that time, a kilo of yarsagumba cost one thousand yuan, which was worth six thousand Nepali rupees. “After realising the importance of the herb and it’s financial benefit, I decided to trade it and sent my brother-in-law to Dolpa to find the herbs. In 2043 BS, one kilogram cost Rs 400. He brought six kgs of the fungus that year. The following year, in 2044 BS, I traded 20 kgs at the rate of Rs 500per kg. In the year 2045 BS, I traded 30kg at the rate of Rs 650 per kg yarsagumba and we sold it in Taklakot,” he said.

But trading yarsagumba was illegal at that time. “We had to sleep during the day and walk at night. There were nine porters and me in our group. The porters carried about 12 to 13 kg per person. After two weeks of the journey from Tichurong we would reach Dang and from there the nine porters would return to Dolpa. I would again load the yarsagumba in a truck with other goods and bring them to Kathmandu. The Tibetan trader would receive it, and transport it to Tibet all along the poaching trails from Sindhupalchowk.”

Over the years, owing to its health and financial benefits, the herb garnered extreme popularity which continues till this day. And Yarsagumba traders have seen how trade over the herb has changed over the years.

Eighty-six-year-old Tawa Budha from Gumbatara village of Kaike Rural Municipality of Dolpa district remembers how difficult it was back when he was younger to find the herb.

"We used to make griddles, sweaters, and blankets, which we carried on our backs and marched to Rukum and Rolpa. We used to walk through heavy rain and heavy snow and live in tents for months on end. So, it was a difficult life. It is much easier now. If you spend a month in the pastures, you can earn the money that you need all year round,” said Tawa Budha.

And while the herb has brought financial independence for many impoverished families, it has made people more money-minded, says Tawa Budha. “If you see the present context of the village, many of the people have left agricultural land uncropped. We are in a grain deficit right now, when in our time we had a grain surplus. We also used to sell grains but now we buy it,” he said. “Moreover, with more and more people wanting to become rich by trading yarsagumba, our pastures and mountains have become polluted and we are facing uncertain weather conditions because of angry mountain gods and deities.”

The first legal provision in regards to yarsagumba came after the enactment of the Forest Act 2049 and Forest Rules 2051, both of which identified yarsagumba as a medicinal herb but prohibited its collection. The act and rule state that if anyone collects yarsagumba, the person shall be fined by Rs 500 per piece.

But in 2058 BS, according to the Nepal Gazette 2058/09/16, the forest regulations were amended to allow the collection and use of yarsagumba. The amendment provisioned that the revenue of yarsagumba be fixed at Rs 20,000 per kilogram. This revenue was quite expensive and concerned people raised voices and lobbied on reducing the revenue, as a result, yarsagumbu's revenue was amended to Rs 10,000 per kg.

The politics in yarsagumba

During the People's War, yarsagumbu was one of the main sources of income for the Maoist party in the mountains. In Dolpa and Rukum district, the Maoist party used to patrol the places where yarsagumba grew and if someone secretly collected and traded the herb, he would have to face punishment from the Maoists. They would export the herb to Tibet crossing North-Western high passes. In Dolpa, Dhotarap was the main trading center.

During this decade, yarsa cultivation and trading was close to nothing for the local people. Then, after the comprehensive peace accord was signed in 2062 BS, yarsa traders were hopeful they would be able to resume work. But another intervention arose from the government side. The local pasture management practice was again overtaken by the district forest officers, the Buffer Zone Committee, and the National Park authorities.

Since then, the state’s priority has always been on revenue collection rather than the issue of sustainable collection. The state apparatus, with the greed for revenue, has allowed violence to seep into the trade. One of the most violent clashes was in Manang in 2006, in the village of Nar, where seven people were killed. Another incident was recorded on June 6, 2008, when two locals were killed and dozens were injured in a clash between the Armed Police Force (APF) and the Dolpo community in Dolpa Dho Tarap.

One of the victims who was beaten by AFP in the clash in Dho Tarap was met by this writer in the winter of 2019, while he was being treated at the Kathmandu Medical Hospital in Jorpati, Kathmandu. Owing to the serious injury he received at the hands of the AFP, he still cannot stand upright properly.

Every year, during such incidents, about a dozen people lose their lives while going to collect yarsagumba. And every year, the state turns a blind eye to such incidents.

Nepal has ratified the ILO Convention 169 of the International Labor Organization, which stipulates that indigenous peoples will have priority and right over land, pasture, and natural resources. These rights include the right of these peoples to participate in the use, management, and conservation of these resources. Admittedly, it has not yet been adequately adhered to in practice. The state has not yet paid enough attention to the issue of how to coordinate and facilitate the people financially and how to make yarsagumba a source of sustainable economic production since the time of the legalization of yarsagumba.

According to a report of the impact study of yarsagumba on Nepal’s economy by Nepal Rastra Bank in 2072 BS, in the fiscal year 2070/71, yarsagumba worth Rs. 4.92 billion was collected in eleven districts of Nepal. Similarly, from July 2077 to July 2078, a total of Rs. 157.6 million worth of yarsagumba was exported from Nepal.

Despite the herb’s importance for mountainous communities and it being a great source of revenue, the state is silent on its duties of providing local people opportunities to promote indigenous knowledge and skills and on teaching capacity building and sustainable collection of yarsagumba. And the loss is ours to bear