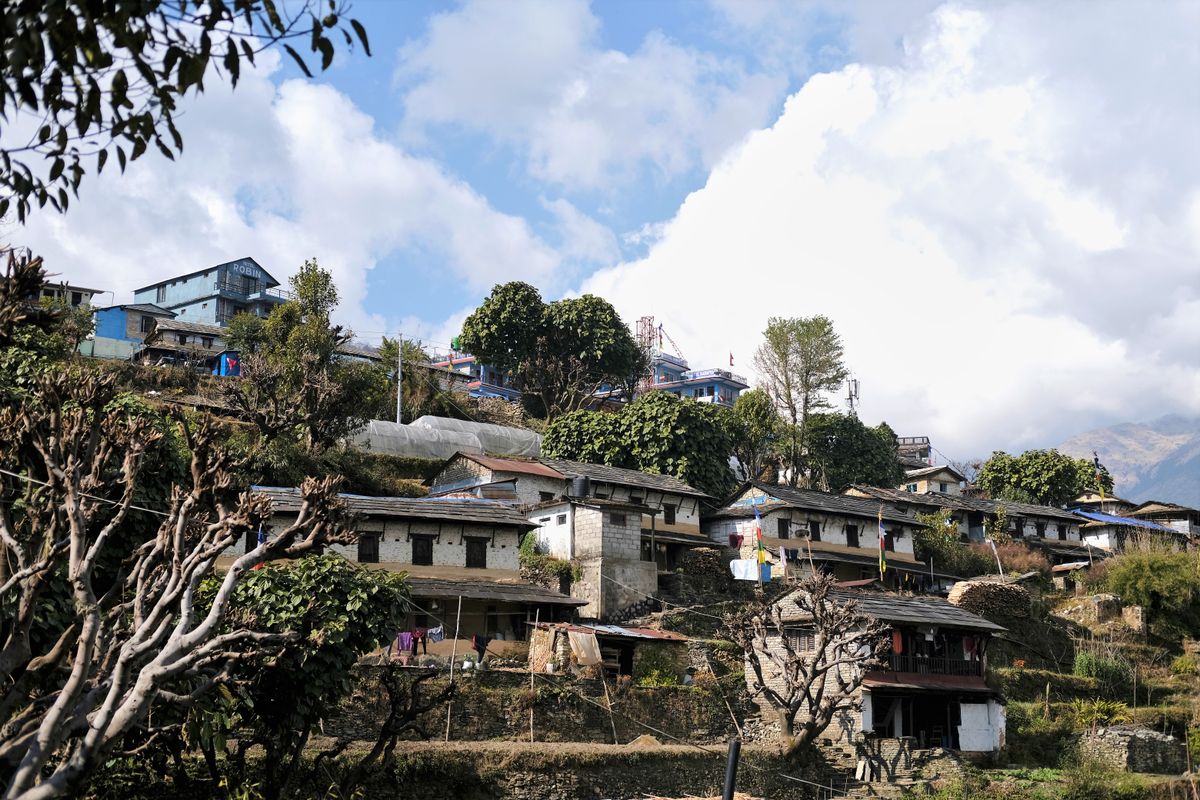 Every morning, at the height of the Covid-19 pandemic in 2020, 74-year-old Chok Bahadur Gurung would get up early to tend to his vegetables. He would be assisted by his daughter and sometimes also by his young granddaughter in tending to the produce he was growing in a plot of land next to his ancestral home in the Gurung village of Ghandruk. But Chok Bahadur is not a farmer; he’s primarily a hotelier.

Chok Bahadur has been running the Hotel Sakura and German Bakery out of his ancestral home in Ghandruk since 1985, which was when he gave up his job as a teacher. But ever since the pandemic struck and Ghandruk closed its gates to outsiders, local hoteliers like Chok Bahadur had to find an alternative means of sustenance. Many turned to their ancestral profession – farming.

In the past few decades, Ghandruk has become one of the most popular destinations for trekkers and tourists alike seeking to get closer to the glistening Annapurna mountain range. Ghandruk, located close to the trekking hub of Pokhara, is either en route – or at least a short detour away – to some of Nepal’s most popular trekking destinations, including the Annapurna Base Camp trek. Increasing numbers of tourists have prompted the village and its people to gradually shift away from their agrarian roots to a more tourism-centric income model.

“Business was so good in the village that even youths who had moved to Pokhara or farther away decided to come back and build their own lodges and hotels in their family farmlands,” said 56-year-old Ghandruk local and chairman of the local tourism management committee, Kisam Gurung.

The Covid-19 pandemic put a definitive damper on that success. Tourism came to a halt across the world as countries went into lockdown and shut down borders. In 2020, international arrivals decreased by a steep 74 percent, according to the United Nations World Tourism Organization.

Data from the Nepal Tourism Board show that the country saw an even greater loss than the global average, with an 80.7 percent decline in tourist arrivals in 2020. The year that was supposed to have been the nation's vaunted ‘Visit Nepal 2020’ campaign, ended with a meager 230,085 international tourist arrivals. This number dwindled further in 2021, with just 150,962 tourists entering the country. 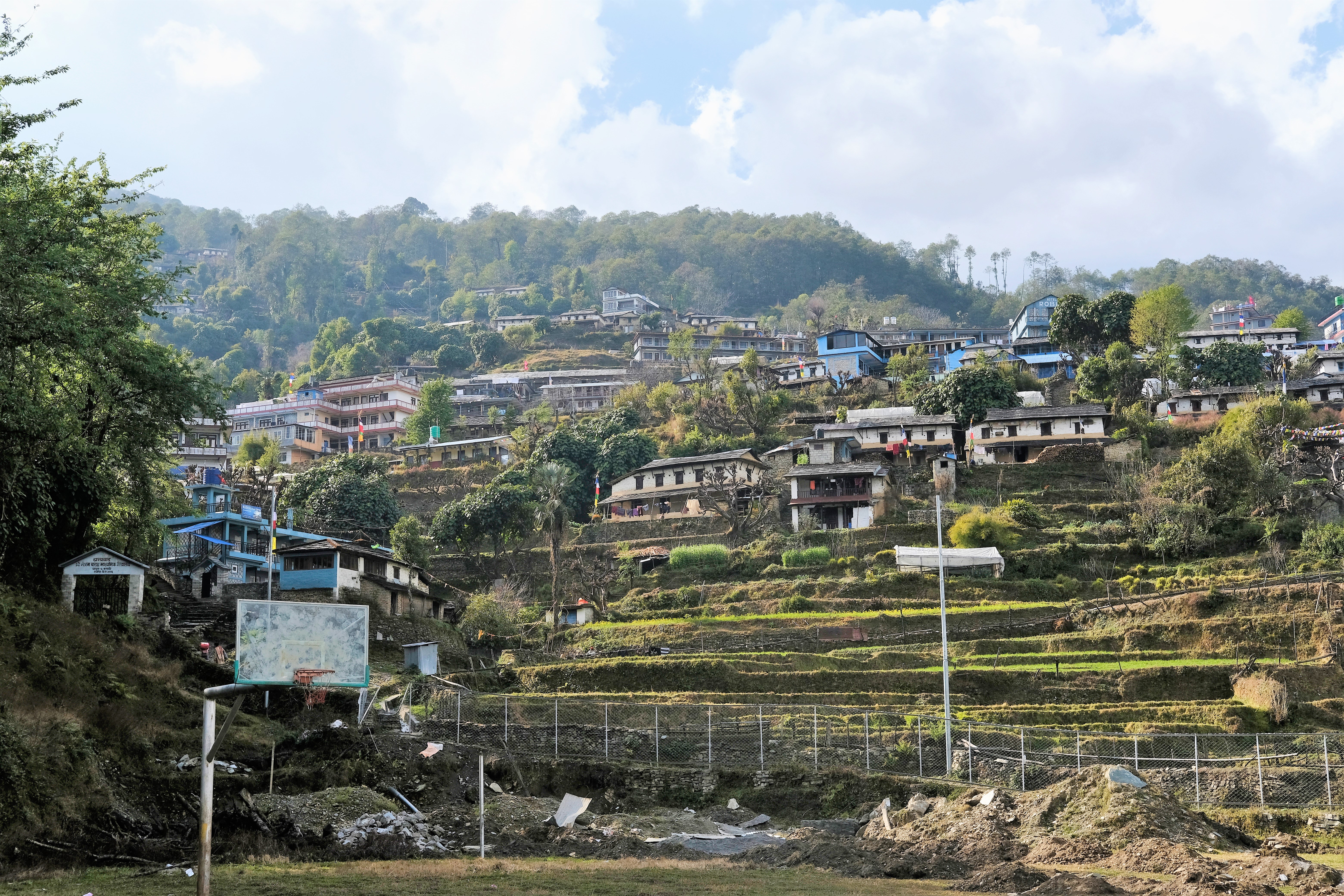 So when the first wave of the pandemic hit and the country went into lockdown, Ghandruk was looking at a grim situation. The small village duly shut down and closed its doors to outsiders.

“We have around 1,100 to 1,200 beds in Ghandruk. Usually, hotels would enjoy at least 50 percent occupancy, which meant that the village would host about 500-600 travelers every day, with each individual spending at least Rs 1000,” said Kisam, who himself runs the popular Gurung Cottage Lodge.

During the lockdown, all arrivals to the village were halted. Even locals who were forced to travel out of the village had to strictly isolate themselves once they returned.

“We could have eased up on restrictions and allowed a few travelers to enter to keep the revenue stream from completely drying up, but we came together and decided that would do more harm than good,” he said.

With no travelers to host, the villagers had to find a way to put food on the table and so, most of them went back to growing their own crops and vegetables.

“During the lockdown, we locked down our hotel and went back to farming,” said 65-year-old Bel Bahadur Gurung, who has been operating the Hotel Trekkers Inn Lodge since 1993. “We grew vegetables and tended to cattle on whatever land we owned. We had to, our usual income was not there, so we were forced to farm.”

While they were not making as much money as they had been prior to the pandemic, they were also spending less on maintenance and other operating costs.

“There are about 70 hotels/lodges in Ghandruk today, all of which are run by locals on their own land and houses. So costs like rent were not a big issue,” said Kisam. “The community was also able to come together and share what they farmed with one another. So people were able to keep expenses down.”

But even after the lockdown was lifted, there were still no tourists. Covid-19 continued to linger, hampering travel plans, especially international ones. International arrivals have yet to pick up for the entire country, even in 2022. It was domestic tourists who came in to save Ghandruk.

Nepalis who had been cooped up in their homes for months due to the lockdown were itching to travel and many chose Ghandruk as it was close to Pokhara, already a popular destination for domestic tourists, and didn’t require much of a commitment. Another big factor is that now a jeep from Nayapul can drive visitors all the way up to the village outskirts. In between and after the lockdowns of 2020 and 2021, domestic tourists have flocked to Ghandruk. According to Kisam, most domestic tourists that visit the village are not trekkers but casual travelers looking for a short getaway.

Kisam has seen this phenomenon before – after the earthquakes of 2015. There was a similar surge in domestic tourists a year after the disaster.

“After the initial fears of the earthquake had subsided, we saw a lot of local travelers come into the village, especially ones from Kathmandu. Some of my Nepali guests even shared that their short escape to our village did a lot to take their attention away from their worries,” said Kisam.

While Nepali tourists do not spend as much or stay as long as foreign travelers, they do tend to come throughout the year. Most foreign travelers come during the two major tourist seasons – in the spring from March to May and in the autumn from September to November.

“Sometimes, if the road to the village was blocked, Nepali tourists would wait a few days in Pokhara and then come to Ghandruk once the road was cleared,” said Kisam.

The pandemic, however, is far from over, as new variants continue to wreak havoc. A third wave once again threatens tourist destinations like Ghandruk. But hotel owners like Bel Bahadur are not exceptionally bothered, even though closing down is not something they look forward to. Locals are optimistic that tourism will pick up. Chok Bahadur is using the lull in guests to renovate his hotel and construct an additional wing to the Hotel Sakura.

Chok Bahadur is not the only one who thinks this way. Despite the pandemic, it seems that the steady influx of domestic travelers has reassured villagers that business will continue even if foreign tourists do not come. In fact, a stroll through the village will bring visitors across plenty of construction sites.

“Nepali guests have kept our hotels full and I think the people of Ghandruk have come to realize how valuable domestic travelers really are,” said Kisam, busy introducing another group of Nepali travelers to their rooms.

And if a nationwide lockdown is implemented once again, Ghandruk can always go back to farming.

They want free, prior, and informed consent