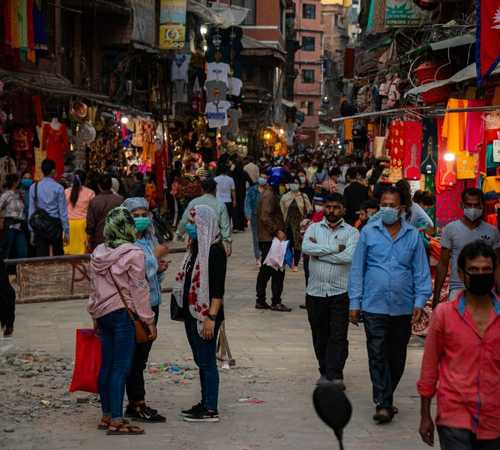 Nepal recorded 26 deaths — the highest single day record till date — in the past 24 hours.

The increased death count coincides with the government’s decision to only pay for the Covid-19 testing and treatment of the poor, persons with disabilities, single women, senior citizens, and frontline workers.

According to experts, the government will no longer be able to downplay the number of deaths once daily infection detections have shot off the roof and the number of coronavirus-induced deaths has soared. On Wednesday, Nepal recorded 5,743 new cases, setting yet another record. As hospitals fill up with Covid patients, private hospitals have been asked to allocate at least 50 percent of their beds for Covid treatment as government hospitals have already been converted to dedicated Covid hospitals. The government has also decided to build new crematoriums in Kathmandu and to hire additional manpower for funeral services in preparation for a swelling death count.

“This turn of events was expected. Functional ventilators are in short supply and people are being asked to bear the cost of tests and treatments themselves. Furthermore, patients are being asked by hospitals to make upfront payments which isn’t feasible for the majority of the population,” said epidemiologist Dr Lhamo Sherpa.

The government has made one wrong decision after another in its handling of the pandemic. In the beginning of the pandemic, it failed to effectively contain the virus even after imposing a five-month long lockdown, and has now lifted the lockdown without a concrete plan of action. Instead of combatting the virus, the government has begun to cave in as evident in its decision to not collect samples from the bodies of the deceased for PCR tests, and by allowing bus services to operate filling up seats in short and long-distance services in complete disregard to the public health safety protocol of maintaining social distancing. The government had initially asked the public to self-isolate and get PCR testing done before and after travel. However, this has not been effectively implemented in the pretext of Dashain, the biggest festival for Hindus in Nepal.

People are traveling without any tests or quarantine. This will enable the virus to travel with them to the villages, experts warned.

“Neither testing nor treatment is free, even if the government has claimed otherwise. The public has to submit proof of poverty or disability, which further creates obstacles in receiving such services. Unlike other diseases, Covid cases can deteriorate within the span of a few days so the likelihood of people dying without receiving adequate treatment or testing is higher,” Dr Sherpa told The Record.

The escalating death count is thus the result of a combination of ineffective policies, the unavailability of adequate treatment, and a lack of support from the government in the prevention and treatment of the disease. The situation is likely to further worsen in the winter when people tend to live in closed spaces, said Dr Sherpa.

Nepal hit the 5,000 mark in a single day on October 10, totalling 105,684 cases. The government ignored the alarming surge, however, and decided to scale down testing. After 10 days, the number of cases has surpassed 144,000, with daily increases averaging at around 4,000 cases.

On Wednesday, Nepal set a new record in the number of PCR tests executed as a record 20,118 PCR tests were conducted in the past 24 hours. The government claims its capacity to conduct PCR tests is even higher at 26,000 tests even if the average daily number of tests conducted has hovered at 12,000 per day for a while.

Kathmandu Valley also observed a record high in the number of coronavirus cases detected in a single day with 2,391 new cases in Kathmandu, 543 in Lalitpur and 173 in Bhaktapur. This has brought the number of confirmed cases in the Valley to over 60,000 with 23,129 active cases, which makes up more than half of the national total number of active cases that looms at 44,776.

According to the Ministry of Health and Population, a total of 269 Covid patients are currently being treated in intensive care units across the nation while 87 others are on ventilator support.