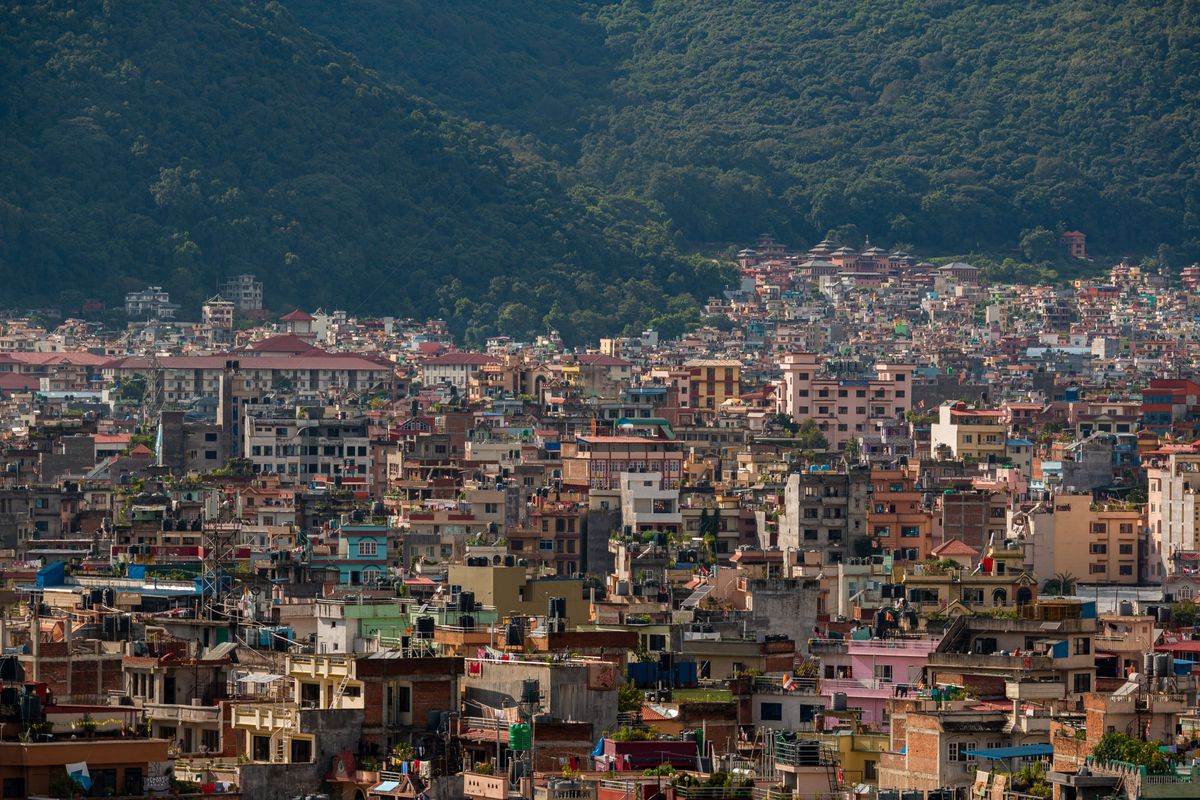 Hiding secretly in Kathmandu’s heavy, haphazard density, a disease is ravaging the city. It attacks the lungs first, spreading in the tiny alveolar sacs of the body. Though medicine and vaccines exist, the pathogen that spreads the disease has mutated into many variants that are able to evade treatment. In Nepal, it is primarily a disease borne by the young , killing at least 46 people per day in the country, most of them being the poor.

This disease is not COVID-19.  Unlike the coronavirus, the MT bacteria can be kept out with a private water supply, gated housing, and tall walls. Hence, it does not incite the same level of outrage from the gentry of Kathmandu. According to the Ministry of Health, the Kathmandu Valley has one of the highest rates of tuberculosis incidence in the country — averaging about 141 cases per 100,000 residents. Yet, motivated largely by apathy towards the poor and an unwillingness on the part of the authorities to confront the inequity in our cities, the pandemic of tuberculosis — consumption, chhayarog — raging in Kathmandu is only the poor man’s burden to bear.

Tuberculosis is just one of the many deadly diseases that are being harbored in Kathmandu’s alleys, its informal settlements, and one-room apartments that have a communal bathroom shared by five families. Kathmandu is the “typhoid capital of the world”. Nepal is barely through the second wave of the Covid-19 pandemic and experts are already raising alarms about possible dengue explosions in the valley.

And yet, curiously, for Kathmandu’s select few elites, it is very easy to ignore the troubles of the poor. In some pockets of the city — Baluwatar, Dillibazar, Lazimpat — that are only accessible by cars (windows shut tight to prevent all pollutants), you will find pristine neighborhoods where garbage collection services come on time and piped water is treated privately before entering the home.

This disparity underscores the atrocity currently being perpetuated — the systemic exclusion and discrimination of anyone who is not a rich, able-bodied, 20-40-year-old man. On paper, Kathmandu is a vibrant city where the annual per capita income reaches $2,738; yet, anecdotal evidence and classified ads will tell you that the actual monthly average ranges between Rs 10,000-20,000. When you consider the fact that even in the periphery of the city, in areas like Thimi’s Dadhikot, the cheapest flat costs Rs 11,000, the economic disparity becomes all the more apparent. Kathmandu is a great city to live in if you are among its elites, cruising down the newly expanded Ring Road in your private vehicle. However, for the everyday citizen compelled to take crowded, dilapidated ‘public’ transport from the outskirts, priced out of the city centers by five-star hotels, barely staying above the poverty line, living in Kathmandu can be an ordeal.

There are three primary reasons for this state of urban failure — a lack of coordination between various actors, lack of regulations for private actors, and ribbon-cutting policymaking.

Too many chefs: A problem of coordination

The most pressing challenge for urban development in Nepal as a whole remains the acute coordination failure between the various municipal governments, the urban development ministry, NGOs, and private actors.

To give credit to the Nepal government, in recent years, there has been a shift in the government’s policy towards managing Nepal’s urban environment. The Ministry of Urban Development was created in 2012 to coordinate between the various national infrastructure projects. Furthermore, the National Urban Development Strategy, published in 2017, is a concerted effort to coordinate urbanization for the next 15 years, as well as outline key areas of development. The implementation of this strategy is highly decentralized, with elected mayors, deputy mayors, and ward chairpersons overseeing development in municipalities, sub-municipalities, and rural municipalities. In the case of the Kathmandu Valley, a larger governance body — the Kathmandu Valley Development Authority (KVDA) — oversees development. In addition to these governance bodies, a number of NGOs and private actors too work on urban conditions.

Such a fragmented governance structure, each with its own development priorities, often leads to acute bottlenecks in large-scale infrastructure projects. Though federal bodies such as the Ministry of Urban Development and Ministry of Water Supply exist to coordinate across these actors, factors like political instability, clientelism, and a lack of capital at all three levels of governance hinder coordination. In such an environment, even if the political agents in power do have the political will to make controversial moves, such as demolishing homes to expand roads, the actual decision-making is often paralyzed.

This fractured environment has resulted in a lack of policy compliance and a waste of resources as well as the continuing cycle of construction-demolition-construction that Valley residents are all too familiar with.

Though champions of the private sector would highlight this coordination failure as a reason to promote private development, the truth of the matter is that a failure to regulate the private sector is as significant a reason for Kathmandu’s chaos. Rampant land speculation and development are behind the massive rises in rent and land prices in the valley. Since 2003, land prices have increased 300 percent. Higher rents have led to the middle-class purchasing parcels of land as investments, thereby leading to a further increase in rent, which in turn leads to more investment. This uncontrolled spiral, as well as the lack of other investment options for the middle class, has resulted in the valley’s open spaces decreasing to only 0.46 percent of its total area.

Similarly, most valley residents are all too familiar with the private syndicate controlled ‘public transport’ system where underpaid (and often, underage) drivers and conductors are forced to run a tight schedule and squeeze every last bit of profit from its users. These syndicates, who now have every major political party in their pockets, have sabotaged any planned improvements to the public transport system — from burning the cooperative-owned Sajha Yatayat buses for being too popular and staging protests against the government mandate to retire old vehicles to even attacking officials who dare to improve the situation slightly. Despite Kathmandu once having a vibrant public transport network (as well as the often-touted trolley bus), the privatization of the industry in the 90s resulted in the dismal state of affairs we see today. The government’s abdication of its responsibility to the private sector in key industries has only created more problems.

Amid political instability and a lack of oversight, urban projects that do get promoted and financed depend heavily on their PR appeal, rather than their ability to positively impact the city and its residents. Nowhere is this desire for grandeur more apparent than in the Kathmandu Valley satellite city project.

In a city where only 30 percent of the population is connected to formal sewer lines, the government wants to build self-sustaining, smart “satellite cities” in the four cardinal directions of the Kathmandu Valley. When most of Kathmandu’s residents are being choked by smog, the Government of Nepal, in the fiscal year 2019/2020 (2075/76), allocated Rs 120 million to the pilot satellite city in Bhaktapur. Putting aside the feasibility of building whole cities from scratch, it boggles the mind that despite suburbanization and satellite cities being thoroughly lambasted in urban planning literature as neoliberal policies that decimate culture, increase inequality and segregation, as well as increase the carbon footprint, Nepal’s authorities are still attempting to follow outdated models.

Looking at Kathmandu’s disarray, the desire to start from scratch is understandable, but building a satellite city where most of the housing and services are oriented towards the middle class is a betrayal of the urban poor. Yet, driven by ribbon-cutting policymaking — where flashy policies are prioritized over practical ones — Kathmandu is pushing ahead with a pipe dream. Every leading politician wants to be the person to inaugurate a satellite city, and hence have bragging rights for their next political campaign. Saying “I built sewage-treatment facilities” is a lot less sexy than saying “I built a new city”.

Kathmandu is at a crossroads of development. Despite only 17.4 percent of Nepal’s population living in cities, Kathmandu Valley is the fastest-growing urban agglomeration in South Asia, growing at a rapid 4 percent every year. In the next 20 to 30 years, we are going to see unprecedented levels of movement into our cities and towns, completely transforming our urban landscape. Most of these people will be low-income migrants from the villages who will find it difficult to obtain proper housing, leading to a rise in informal settlements. The population of Kathmandu’s 63 slums and informal settlements is expected to grow at a rate of 25 percent every year. Though data on the quality of life in these slums is limited, one survey found that “98% of households lived in semi-permanent and temporary accommodation, 15% practiced open defecation and 48% used latrines that discharge directly into a river.”

After nearly two years of the pandemic, the global consensus seems to have shifted from eradicating this disease completely towards a plan of living with Covid-19 as endemic. In the future, Covid-19 will likely be just another disease plaguing Kathmandu, alongside tuberculosis, cholera, and typhoid. Just like these diseases, Covid-19 will also spread through our crowded public transport and haphazard urban landscape.

However, there is a key difference. For the first time, both the rich and the poor have experienced (albeit at different intensities) Covid-19, and witnessed how underprepared our nation and cities are to combat it. Placing more attention on urban planning and urban development has the potential to not only decrease the ability of the coronavirus to spread and mutate, but also prevent a whole list of other diseases. Whether motivated by altruism or self-interest, the consensus must be on building a city for all.

Intoxication, Music, Revelations: A conversation with Rabi Thapa on Thamel