An average of 100 animals die every year from unnatural causes around Nepal’s national parks, primarily due to unplanned construction of infrastructure. 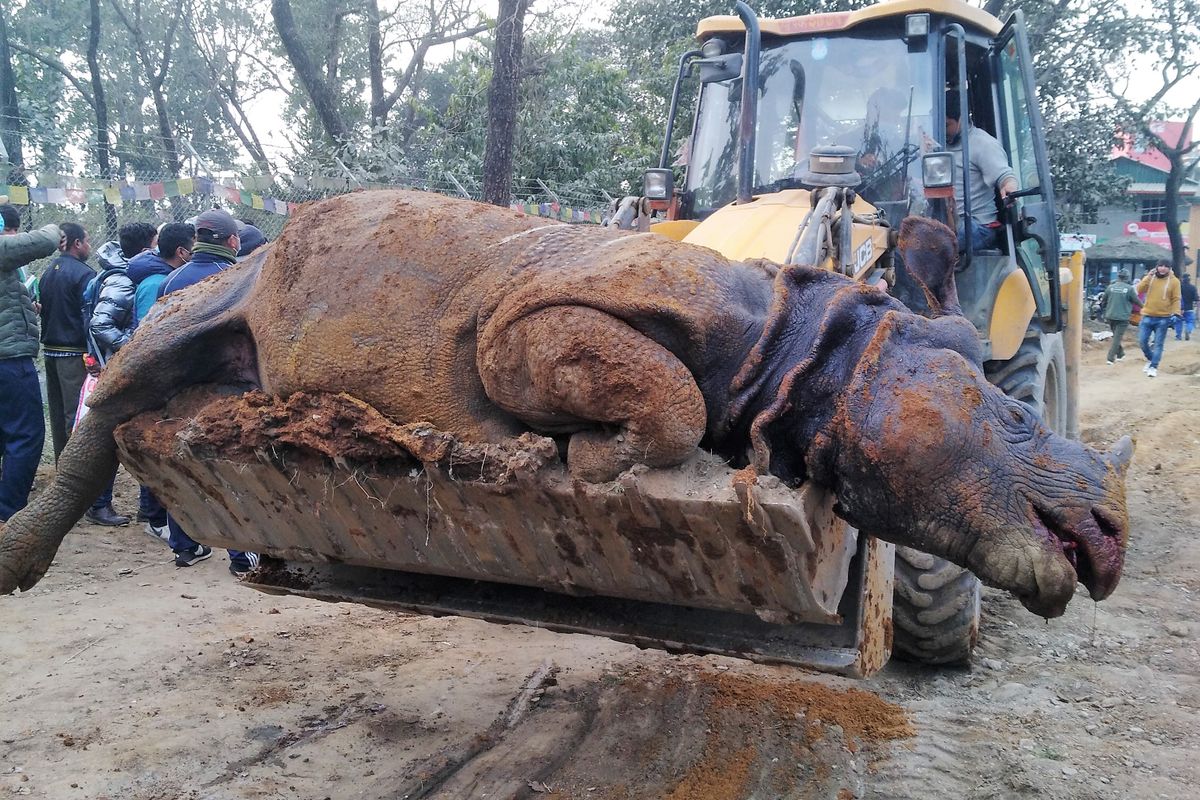 The rhino that died in Chitwan on January 23. (Photo: Suresh Khatiwada)

On January 23, a one-horned rhino was found lying dead in a freshly dug ditch by the roadside in Chitwan’s Barandabhar. The rhino had fallen into the ditch – dug as part of the ongoing expansion of the Bharatpur-Gondrang road – the night before and died after being unable to get out.

The death led to outrage among conservationists and animal rights activists, leading the federal Ministry of Forests and Environment to form a five-member investigation committee led by joint secretary Rajendra KC. While the committee has conducted a field study and will soon submit its report to the ministry, Chitwan National Park has itself issued an arrest warrant for the representative of Indo Sagun JV, the construction company responsible for the road expansion, according to The Kathmandu Post.

This death, however, is not an anomaly. Every year, at least a hundred animals die due to unnatural causes around Nepal’s national parks, according to the Department of National Parks and Wildlife Conservation. Endangered species like rhinos and tigers too die in such accidents, but their deaths are rarer and often make headlines. A majority of these deaths can be attributed to unplanned infrastructure development in and around the parks.

On March 23, 2019, for instance, a rhino died after falling into the septic tank of the Tiger Land Hotel in Jagatpur, Chitwan. Earlier, on August 8, 2016, a rhino was electrocuted to death near the premises of the Hotel Meghauli Serai after coming into contact with an abandoned live wire. In this particular incident, the Chitwan District Court fined four hotel personnel for negligence.

Such incidents are not just limited to the environs of the Chitwan National Park. With both local and federal governments building roads across the country, often without conducting environmental impact assessments, wildlife have become unwitting victims. Last year, on January 2, 2021, an adult tiger died after being struck by a car near the Parsa National Park in Bara district’s Aadharbhar. Earlier, on December 21, 2016, another adult tiger from the Bardiya National Park had also been killed in a road accident along the East-West Highway in Bardiya district.

As per the tiger census in 2018 conducted by the Department of National Parks and Wildlife Conservation, there were 235 wild tigers in Nepali national parks – 93 in Chitwan, 87 in Bardiya, 18 in Parsa, 21 in Banke, and 16 in Suklaphanta. A new survey was conducted in December 2021 but the results have yet to be made public.

Similarly, Nepal houses 752 one-horned rhinos in Nepal – 694 in Chitwan National Park, 38 in Bardiya, 17 in Suklaphanta, and three in Parsa.

But all of these gains could come under threat if animals keep dying due to negligence in largely preventable accidents, say wildlife conservationists.

“Haphazard infrastructure development is the primary challenge to wildlife conservation in Nepal,” said Ramchandra Kandel, chief of the Department of National Parks and Wildlife Conservation. “More animals are dying in road accidents and by falling into uncovered ditches and tanks”

As per data from the department, 108 animals died in road accidents in the fiscal year 2076-2077. In the previous year, that number was even higher at 124.

“Pressure from the population increase is being felt in conservation areas, with the biggest demand being for infrastructure development,” said Gyawali. “But if we do not take conservation hand-in-hand with infrastructure, we will lose our animals and along with them, our national pride in the world of conservation.”

According to Gyawali, infrastructure development around national parks must take into account environmental safeguards and conduct environmental impact assessments. Construction companies are also required to obtain permission from national parks before beginning any construction work inside the parks or in the buffer zone. But this is rarely done.

More than 300 kilometers of the East-West Highway already runs through five national parks and there is often construction along this highway in the form of road expansion and the building of bridges. But the Nepal government is also planning to develop more infrastructure, like an east-west railway, north-south highway, and expansion of existing highways, which is likely to infringe on existing national parks and conservation areas.

According to the Ministry of Physical Infrastructure and Transport, the Nepal government plans to expand the south-north highway through Rasuwa, Galchi, Bharatpur, and Thori.

Keshab Kumar Sharma, joint secretary at the ministry, said that this expansion is a national priority project for the government. The road passes through Chitwan National Park and any expansion is certain to impact wildlife within the park.

“The government must decide which is more important – conservation or development?” said Sharma.

But the issue isn’t as binary as Sharma makes it out to be. Conservationists say that while it is not possible to completely halt all infrastructure development, it is important to ensure that such construction does not adversely impact wildlife populations. This can be done by routing roads away from wildlife habitats or ensuring that they include infrastructure, like appropriate fencing and wildlife crossing bridges, that will help animals avoid roads. Such plans must be included from the very beginning of construction.

“All government agencies that handle infrastructure work need to be serious about conservation,” said Kandel. “Awareness programs have been conducted by the Department of National Parks and Wildlife Conservation to many government agencies that are involved in infrastructure development. But what they’ve been taught has not been implemented in practice.”

The debate between conservation and development in Nepal often tends to go into the extremes where the choice, as Sharma the joint secretary put it, is often seen as one or the other. This has perhaps been most evident in the debate over the planned airport at Nijgadh. Defenders believe that the massive environmental costs are well-worth the building of a necessary airport while opponents say that no infrastructure can warrant such devastation of wildlife habitats.

Most conservationists, however, say that it is important to take a middle path approach where the construction of infrastructure does not stop, only that it is conducted in an environment-friendly manner. Contractors cannot be negligent about leaving ditches uncovered or electric wires exposed, and if they are, they must be prosecuted within the law, says Kandel.

But Sharma, the joint secretary, believes that Nepal is still in the early stages of development and it cannot afford environment-friendly infrastructure all of the time.

“We have started wildlife-friendly infrastructure development but we have been unable to implement it everywhere because we have budget limitations,” he said.

But according to Kandel, Nepal has laws and regulations in place that mandate that contractors take environmental concerns into account; it is simply a matter of enforcing them.

Mukesh Pokhrel  is a Kathmandu-based journalist. Pokhrel writes issues on climate change, environment, social, and political. He has two decades of experience in the Journalism field.

In addition to building resilience against climate change, we must also come to terms with the trauma it leaves us with.