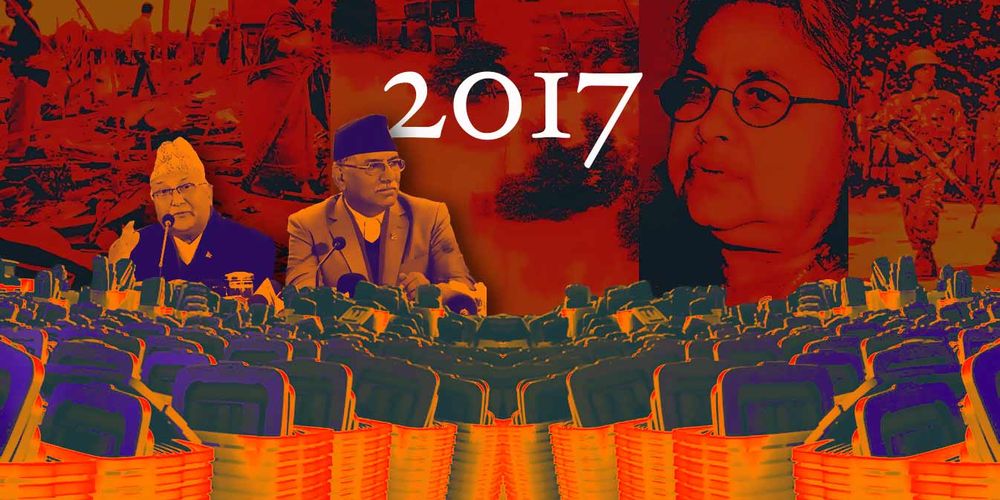 As we step into 2018, let’s look at the biggest stories in Nepal this past year.

March 7: Five killed in Saptari Police firing  2015 had seen widespread unrest in the Terai after the promulgation of Nepal’s new constitution that failed to address the demands of marginalized communities, resulting in at least 45 people killed, including nine police officers. The response from the government showed little regard for human rights, with live fire being used at demonstrators and bystanders, beatings, arbitrary arrests and torture. Lingering Madhesi resentment towards the government resurfaced in March during UML’s mass meetings in Saptari as a part of election campaign. Five people were killed when police opened fire on crowds of Madhesis protestors, and also attacked bystanders.

Read more
The police and the paramilitary biased against us: Saptari locals
Maleth: a mourning village, a dead industrial estate

April 25: Two years after the 2015 earthquake  The second anniversary of the earthquake saw no respite for the vast majority of victims. The number of houses completely destroyed or partially damaged stands officially at 626,694.  Only 22,000 houses have been rebuilt. The National Reconstruction Authority, formed on 25 December 2015, has been slow to respond. Crippled by political bickering, the NRA has already had three CEOs. Meanwhile, large numbers of victims are still living in makeshift tents of tarpaulin or corrugated tin. The NRA has also set new deadlines for grant recipients to finish reconstruction.

April 14: Kathmandu no-horn zone  To mitigate sound pollution in the highly congested capital, the KMC and Metropolitan Traffic Police Department brought a new law banning the needless use of vehicle horns. Traffic police can fine offenders up to NPR 500.

April 21: Six Madhes-based parties unite to form RJP-Nepal  The Tarai Madhes Loktantrik Party, Sadbhawana Party, Tarai Madesh Sadbhawana Party, Rastriya Madesh Samajbadi Party, Nepal Sadbhawana Party and Madhesi Janadhikar Forum-Ganatantrik came together to form the Rastriya Janata Party Nepal. RJP-Nepal would go on to become the fourth largest party in the national polls in November-December, and along with Sanghiya Samajbadi Forum, would win against the tide of the Left Alliance in province 2.

May 12: China Nepal sign deal on OBOR  Nepal and China signed a Memorandum of Understanding on the framework agreement on China’s One Belt One Road Initiative (OBOR). Touted as an international collaborative development strategy, OBOR marks a step in China’s increasingly assertive global presence. India has refused to join the initiative.

May 14: Nepal local elections  Nepal held first phase of local level elections in three of the seven provinces—province 3, 4 and 6—in the newly created local bodies. The last local election was held in 1997, a year after the Maoists launched an armed insurgency. The voter turnout in 281 local units of 34 districts in the first phase was 73 percent, 5 percent lower than the voter turnout in the Constituent Assembly election in 2013. The second phase of election, held in 334 local units of 41 districts in province 1, 2, 5 and 7 provinces on June 29, which saw 70.5 percent voter turnout. Third phase of local level election was held in 136 local units in eight districts of province 2 on September 18.

June 6: Deuba Elected 40th PM of Nepal  Outgoing prime minister Pushpa Kamal Dahal proposed Sher Bahadur Deuba for the post, and this proposal passed the Legislature-Parliament with 388 votes in support, allowing Deuba to become PM for the fourth time. Deuba’s last three terms had been notable for chaos and corruption, and Deuba was also the prime minister when Nepal’s civil conflict began. Deuba also put up the constitution amendment bill for voting in August.

July 10: Nepal Army’s expanding roles  Nepal army’s plan to run an FM station led to debate about the army’s increasing portfolio. The army has, in the past, overseen other construction projects. In March, there had been concerns about transparency and accountability regarding the army’s involvement in the Fast Track project (a highway connecting Nijgadh and Kathmandu), and the government had formed a panel to investigate misappropriation. Later in August, the government decided to officially hand over the Fast Track project to the army. The army was also deployed for the elections. The army’s new assertive presence in peacetime Nepali society has sparked concerns regarding the army overstepping its constitutional mandate.

August 10: New law criminalizes Chhaupadi  While it had been ten years since the Supreme Court had outlawed Chhaupadi (a Hindu practice in rural hills of Nepal, where menstruating women are banished into cowsheds), the custom had persisted. In August, the parliament criminalized Chhaupadi. Anyone found forcing a woman to perform the practice could get a three month jail sentence, or NPR 3000 fine, or both. Chhaupadi received significant media attention after two women died during Chhaupadi in 2016 and another one died in July.

August 12: 146 dead due to landslide and flooding  Torrential rainfall in mid August inundated large areas of northern India, southern Nepal, and Bangladesh. Flooding affected 12 districts in the Terai, destroying thousands of houses, leaving many injured and 146 dead. Nepal’s Home Ministry mobilized 26,000 personnel for search and rescue operations. The Nepali government had originally attempted to enforce a one door policy that barred NGOs and INGOs running relief operations independently (as it had done in the immediate aftermath of the April 2015 earthquake). The Supreme court later ordered the government to not adopt the policy. The government had also decided, amid trenchant criticisms, to provide NPR 70 per person as daily allowance. It also stopped all aid in the weeks prior to the elections.

August 22: Constitution amendment bill fails in the parliament  The government tabled an amendment to the constitution as demanded by Madhes based parties, which failed to garner two third votes of the parliament. A total of 347 votes went in favour of the amendment, 48 votes short for two third of the 592-seat parliament. UML, the second largest party in the parliament, voted against the amendment along with other nationalist and right-wing parties. Thirty-nine lawmakers, mostly from Nepali Congress and the Maoist (Centre) chose to abstain. Despite its failure, the bill opened the door for the participation of Madhes-based parties in the elections.

September 25: Muluki Ain bill passed  Nepal formally replaced the country’s criminal and civil laws, which was derived from a 163-year-old unified laws, also known Muluki Ain (National Codes). The Muluki Ain is Nepal’s first set of codified laws introduced during the Rana regime that institutionalized caste-based discrimination. It was amended many times, and the current replacement, endorsed unanimously, criminalizes the dowry system, Chhaupadi, enslavement, and acid attacks, among other changes.

October 3: Left Alliance formed  CPN-UML and CPN (Maoist Centre), the country’s biggest communist parties, announced a pan leftist alliance right before the elections. The Maoist move came as a surprise to their coalitions partner Nepali Congress in the government. Nepali Congress, out of desperation, announced a “Democratic Alliance” with royalist and right wing parties. The announcement created ripple all across the political spectrum.

October 17: Nepal elected to the UN Human Rights Council  Despite a poor reputation in upholding human rights, Nepal was elected member of the UN Human Rights Council for the term of 2018-2020. National and international rights organizations have expressed concerns over excessive use of violence on protesters during a six month long Madhes movement in 2015, when over 50 were killed while nine police officials were lynched by mob. Some are hopeful that Nepal will have to act responsibly in addressing the rights abuses in the county once it is in the Council.

Nepal also has delayed addressing transitional justice issues. Nine years after signing of the Comprehensive Peace Agreement, the government formed the Truth and Reconciliation Commission and the Commission of Investigation on Enforced Disappeared Persons to look into the human rights abuses committed during a decade long insurgency. The commissions have registered over 60,000 complaints so far. It is unlikely that the commissions will complete their task before their mandate expires on February 10, 2018.

Read more
The Record’s Nepal Election Portal
Nepal Elections Blog
Election results show that number of voters, not population, should be the basis of constituency delineation

The cost of British recruitment on Nepali youth

What happens to the Nepali youth who try to get into the British Gurkha, and fail