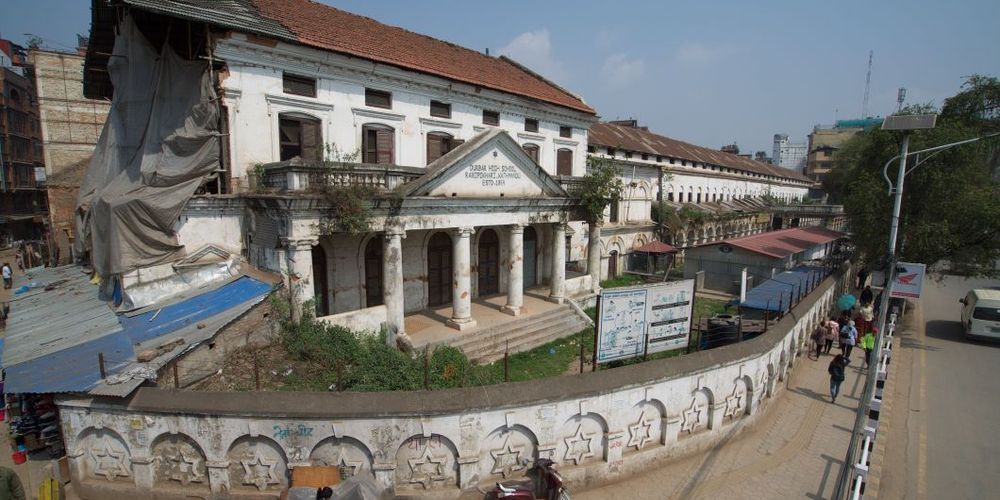 If you walk past Durbar High School on any morning of the week, you will see a long line of school buses waiting outside its gates.

But the buses do not belong to the school, and they are not waiting to drop off students there. They are queuing to pick up students, and take them to private schools across the city.

It tells you everything you need to know about the state of public education in Nepal, that what was once the most prestigious school in the country, is now little more than a bus stop.

Inside its gates, the school’s once grand arches are cracked and crumbling; untouched since the 2015 earthquake. Just metres away stands a row of dirty temporary classrooms. In one, there is a single student sitting alone with a teacher. In others there is no teacher at all. Not one teacher has enrolled their own child in the school.

The transfer of much of the responsibility for education to municipality level has created a real opportunity to change the quality of public education. But how?

Like in many developing countries, parents in Kathmandu are deserting public schools (meaning government or community schools) in favour of low-cost, and not so low-cost, private schools. And who can blame them?

While primary school enrolment in Nepal has increased to almost 97 percent, less than half of students complete secondary school. Only about a third of students in public schools passed the SLC (now the School Evaluation Exam), compared to over 90 percent of students in private schools.

The government, with the financial and technical support of major international aid agencies, is investing $13billion in its education system between 2009 - 2022 through two major development plans. But there is little evidence that the quality of teaching and learning is improving.

There are many reasons for this, but there is one both the government and aid agencies seem unwilling or unable to address; the highly centralised system by which teachers are deployed to schools.

‘Deployed’ is the correct term, because there is no teacher recruitment in Nepal. Public schools do no advertise for vacancies, and teachers therefore cannot apply for them.

The reason for this is tied up with the fact that government teachers have a permanent and guaranteed job (a benefit most temporary teachers will soon enjoy too). This distorts the entire system because it removes any incentive to teach well, improve or even attend regularly. A merit-based system cannot exist alongside a guaranteed job.

In the absence of a labour market, bureaucrats, politicians and trade unions step in to control the deployment process. (Post-devolution, it is not yet clear where responsibility for the deployment of teachers will lie, but there is no shortage of vested interests keen to keep control of the process).

Newly qualified teachers have until now, been deployed by central government, through the Teacher Service Commission, while the transfer of existing teachers has been largely controlled by district education officers.

If a school is deemed to need a new teacher (a decision which itself is subject to political patronage) it is simply sent one. The school has no say over who they are sent, and if they dare to request a demonstration lesson or an interview, some government teachers take great offence; they assume they are good enough simply by virtue of being a government teacher.

Like all bureaucracy, this is very deliberate because it gives everyone involved the power to extract and hand out favours. There are particularly rich pickings to be made from teachers hoping to get transferred from a rural school to one in Kathmandu. Demand for teaching posts in the capital far outstrips need, so it is not uncommon for teachers to pay a bribe of up to 1,00,000 rupees to secure a post in the capital.

Teachers suffer in other ways too. They have little control over where they teach, and whether they can change schools, unless they are well-connected politically. Conversely, schools have little incentive to nurture their teachers, because they know they are unlikely or unable to leave.

What is the alternative?

All teaching posts could be advertised (perhaps on a central website), and open to anyone with the necessary qualifications. The government would manage the overall number of teachers, and offer financial incentives to teach in rural and remote areas (something it already does). The idea would be to give everyone the opportunity of a job, not the job itself.

This would immediately inject incentives into the system. Teachers would be incentivised because their job prospects would now depend on performance not patronage.  And schools would have the power to hire the best teachers (and fire, or at least reject, the worst).

Obviously such a reform would need to go hand-in-hand with other changes, including improving the overall quality of teachers nationally, by radically overhauling the initial teacher selection and training process.

Critics might argue that schools cannot be trusted to manage their own recruitment, but the current system is so open to abuse, and so ineffective, that it is hard to imagine how it could get worse.

At the same time, schools would need to be held to account for their performance. Currently, the local school inspector and resource person (now being replaced by a municipality education officer) occasionally drop by, glance at the teachers’ attendance register and leave (often expecting a stipend for their ‘travel expenses’). There is no monitoring, no rigor and no consequences for failure. Even the results of the School Evaluation Exam are never made public on a school-by-school basis.

In Kathmandu, the most realistic and simple way to improve public school accountability in the short term is to judge schools by the number of students they enrol. Student enrolment is simple to measure and difficult fake; a head count on an unannounced visit is sufficient. School principals instinctively know this, which is why they routinely exaggerate the number of students in their schools.

Student enrolment is also a fairly accurate measure of a school’s quality (when the population density of the catchment area is accounted for). Even in Kathmandu, with is countless private schools, parents will send their children to public schools if they are good enough.

Schools could also be largely funded on a per child basis, which would further incentivise them to improve the quality of their education, because this is the most effective way to attract students.

Pete Pattisson  Pete Pattisson is a journalist specializing in documenting issues of social justice and human rights, in particular labor rights and modern forms of slavery. He contributes to The Guardian newspaper. In 2013 his reports on the treatment of Nepali migrant workers in Qatar, host of the 2022 World Cup, brought international attention to the issue. He has won a number of journalism awards, including the Amnesty Media Award, Anti-Slavery Media Award, and a Webby Award.

The public education system is in crisis, and concrete steps can be taken to make things better